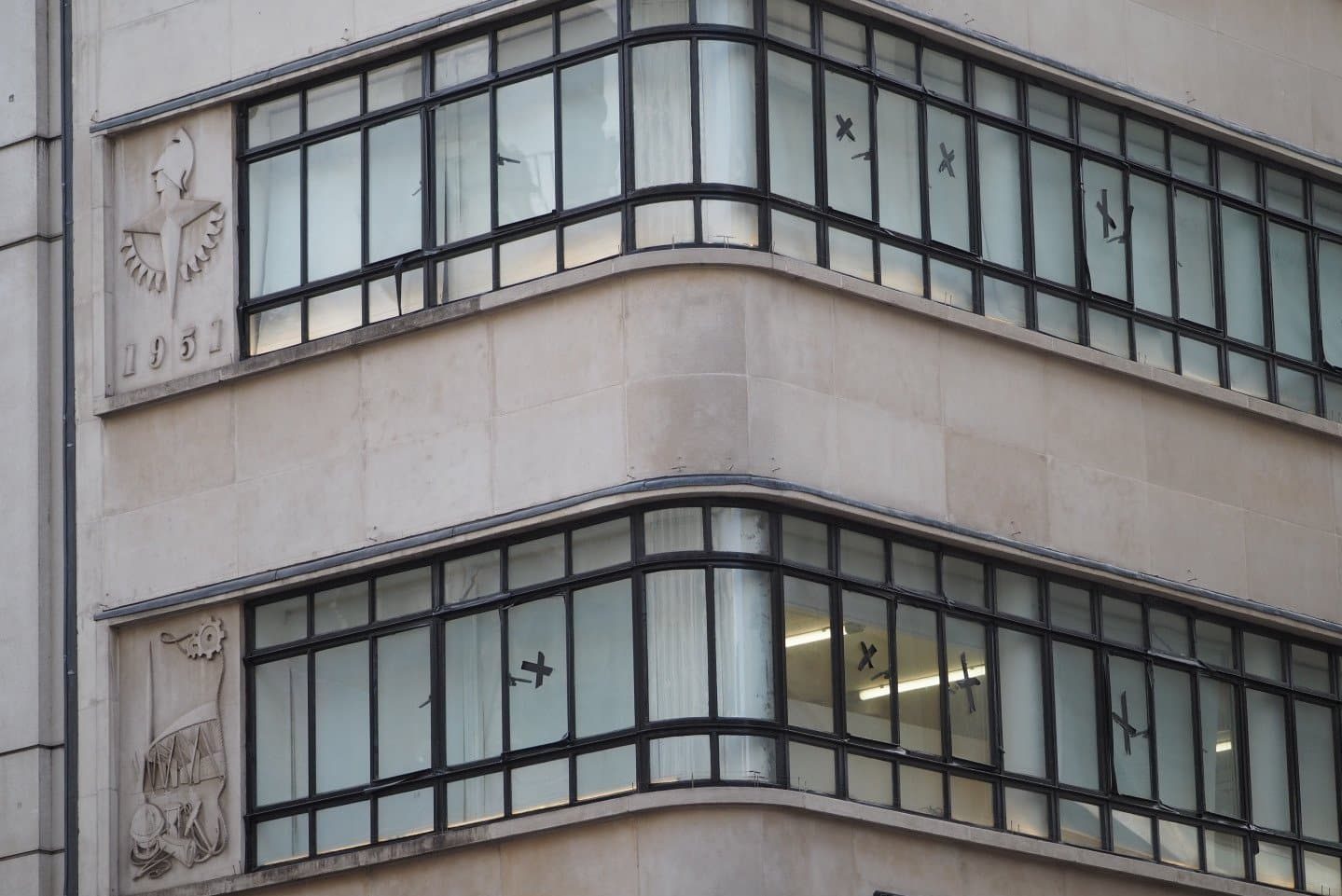 I’ve written quite a few blogs about the history hiding above shop level on Oxford Street. From grim reminders to a theatrical hotspot, there’s plenty to spot if you cast your eyes up along this famous thoroughfare.

But our focus today is 219 Oxford Street.

It’s a small, 5-storey, office building built in the 1950s. You might glance up and appreciate the sweeping curved edges and spot some detailed reliefs but otherwise it goes pretty unnoticed by passersby below.

But – as ever – there’s more to its history.

It was designed by Ronald Ward and Partners in 1950, that firm would go on to design a fairly controversial building in 1963; Milbank Tower, the first building taller than St Paul’s Cathedral in London.

219 Oxford Street was built August 1951 and completed in 1952, but this start date of Summer 1951 explains the sculptural detail on the side.

At the centre we have the Festival of Britain logo.

The Festival of Britain

The Festival of Britain was a national exhibition across Summer 1951. Its aim was to foster excitement and patriotism for a nation reeling from the Second World War.

Based on the hugely successful Great Exhibition of 1851 in Hyde Park, the South Bank was the main hub for the Festival and it kickstarted the development of that previously industrial area of London.

The Festival logo was designed by Abram Games and used on the cover to the Exhibition Guide.

It’s also an important date for qualified tour guides too; Blue Badge Tourist Guides were first established as guides to London during the Festival. After qualifying in 2018, I’m proud to be part of a long tradition of the top accredited guides in the country!

The two other friezes (all by David Trussler) show elements of the Festival and the major sites on the South Bank.

The upper frieze depicts the Royal Festival Hall (the only surviving original building from the festival) as well as a cluster of instruments which reflect its use as a concert venue.

The lighthouse-esque building in the top left corner is the Shot Tower from Lambeth Lead Works which stood on the South Bank from 1826 and was used as a radio tower for the Festival. It was demolished in 1962 and the Queen Elizabeth Hall now stands on the site.

The lower details shows the most iconic structures of the festival (something I’m forever wishing they’d rebuild!) The Skylon, a tall and elegant sculptural alien, that appeared to float on the side of the Thames and the Dome of Discovery.

Below is an image of the Skylon from the Victoria Embankment on the North side of the River c.1951. You can see why it would’ve amazed onlookers!

Here’s another view of the Festival site on the South Bank. The Dome of Discovery, Skylon and Shot Tower are all clearly visible in the postcard below.

219 Oxford Street was finished at the tail end of the Festival and was only granted Grade II listed status in 2001. Historic England  says it was listed because of the “stylish and evocative” reliefs which are “apparently unique” and of “considerable interest”.

It certainly helped secure its future when in 2004 the buildings either side of 219 were demolished. There seems to be even more refurbishment going on at the moment and the interior office space of 219 is now split between the other neighbouring buildings.

Apparently there are some surviving internal features – like a staircase – that survive. However, around the corner on Hills Terrace you can spot the original yellow ochre tiles, commemorating the architects and providing a very 1950s throw back which is a nice reminder.

So next time you’re along Oxford Street, have a look up to admire this reminder from the past! You can read more about the Festival of Britain here.