33-35 Eastcheap: History Behind The Facade

Look up as you walk past 33-35 Eastcheap in The City and you’re treated to an array of carvings and pastel tones. Newly restored, the architects have preserved the clues to its history…

The renovated facades were finished in the Summer of 2017 by Trehearne Architects. They were tasked with tidying up no.s 31-35. 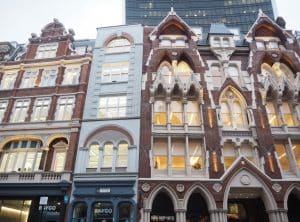 Designed by R L Roumieu and built 1868, today the facade is grade II* listed. The ‘masterpiece’ (as described by Architectural Historian; Pevsner) was made for Hill & Evans, vinegar-makers from Worcester. 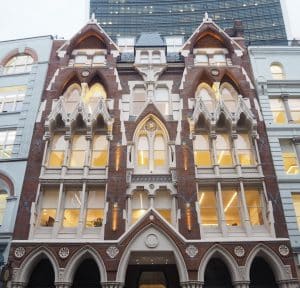 Pevsner goes on to describe it as ‘one of the maddest displays in London of gabled Gothic’ and he quotes from Ian Nairn – architectural critic – who calls it ‘the scream that you wake on at the end of a nightmare’.

Maybe it’s just me, but I rather like its eccentric flourishes!

Then again, I am all about the details… 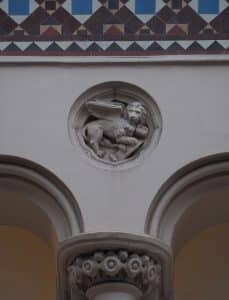 As well as the symbol of Venice; St Mark’s Lion (above). There’s also a collection of faux-Medieval heads peering down at you. 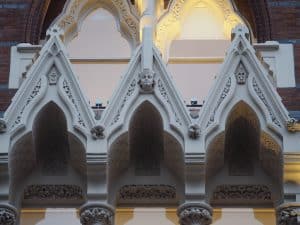 But a surprising addition is this Boar. 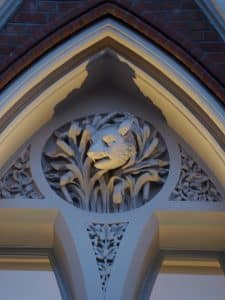 Peeping through reeds with its mouth open. It seemed to me like it was defending its territory from the Eastcheap Passersby.

Why is it here? Well the building stands on the former Boar’s Head Tavern. A famous pub mentioned by Shakespeare in Henry IV Part I as Falstaff’s local.

Although the original Boar’s Head was destroyed in the Great Fire of London (1666) it was rebuilt and attracted many a Shakespeare fan (the pub even hosted themed dinners in the 18th century).

Sadly it was demolished in 1831 but by that point it had been extensively altered and subdivided into shops. 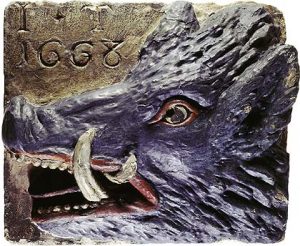 The original Boar’s Head sign was saved and during 2010 was on display at Shakespeare’s Globe. The image above is from the Culture 24 Article here.

Another eye-catching building is the one on the corner, built 1860 by John Young & Son. It was the offices and warehouses for Messers Hunt & Crombie, spice merchants. 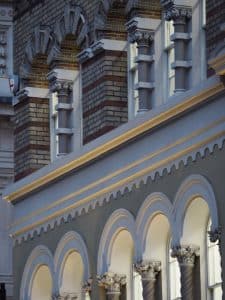 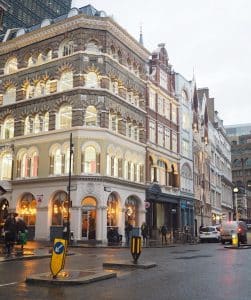 Just around the corner on Philpot Lane is London’s tiniest public sculpture. You’ll be happy to know is has a fascinating tale of its own… 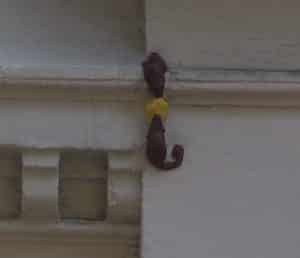