History Behind 42 Brushfield Street In Spitalfields

As I’ve often found across London, the secrets to unlocking a building’s history require you to look up, and 42 Brushfield Street in Spitalfields is no exception!

This week it was a bitter-sweet experience walking past 42 Brushfield Street. On a positive note the ‘ghost sign’ reading “A. Gold. French Milliner” has reappeared.

However the independent bakery; ‘Butter Believe It’ appears to have closed down. More on them later…

This section of buildings on Brushfield Street, previously called Union Street, were built in 1784-5 under local Acts from 1778 and 1782 to join Paternoster Road today’s Bishopsgate.

The C and J Greenwood Map from Layers of London shows Union Street just under the No.16 and if you follow the street you see Paternoster Row leading to Christchurch Spitalfields, the black patch below Church Street (today, Fournier Street).

In the late 1770s houses, including 42 Brushfield Street, were built. They seemed to fit the bill nicely because in David Hughson, London, 1805 the street was described as an ‘excellent modern improvement’.

Who was Annie Gold?

I don’t know about the earlier residents, but from the signage we can identify one; A. Gold.

Annie Gold and her husband Jacob arrived in London in the late 19th century as Jewish Immigrants from Eastern Europe. They were one couple of tens of thousands who arrived into Spitalfields during that time, fleeing persecution.

Annie set up her shop, a French Milliner; hat makers which would’ve been in good company with the concentration of fabric trade in Spitalfields at that time. 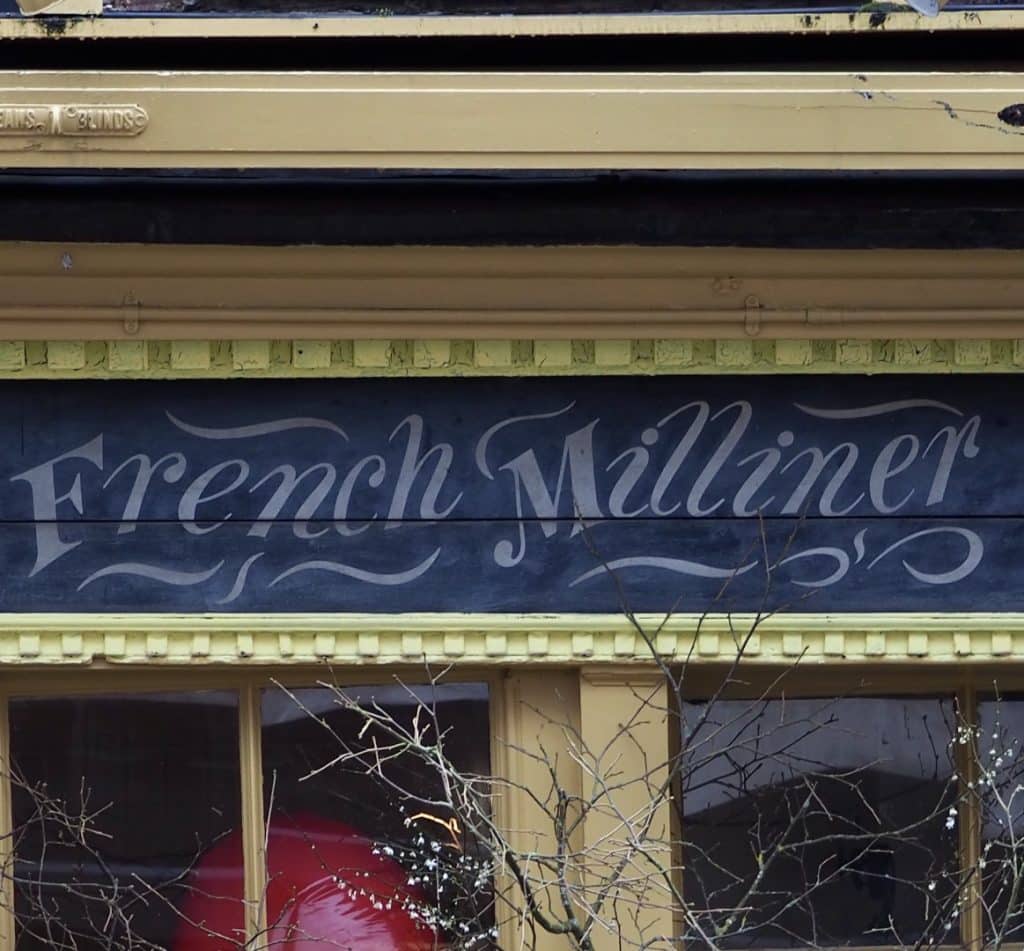 In the 1800s there were 65 independent, small businesses along Brushfield Street. They included a watchmaker, furriers, confectioners, cheesemonger, a fried fish dealer and – less appetising – an undertaker.

It’s not just the signage that reveals historic details. 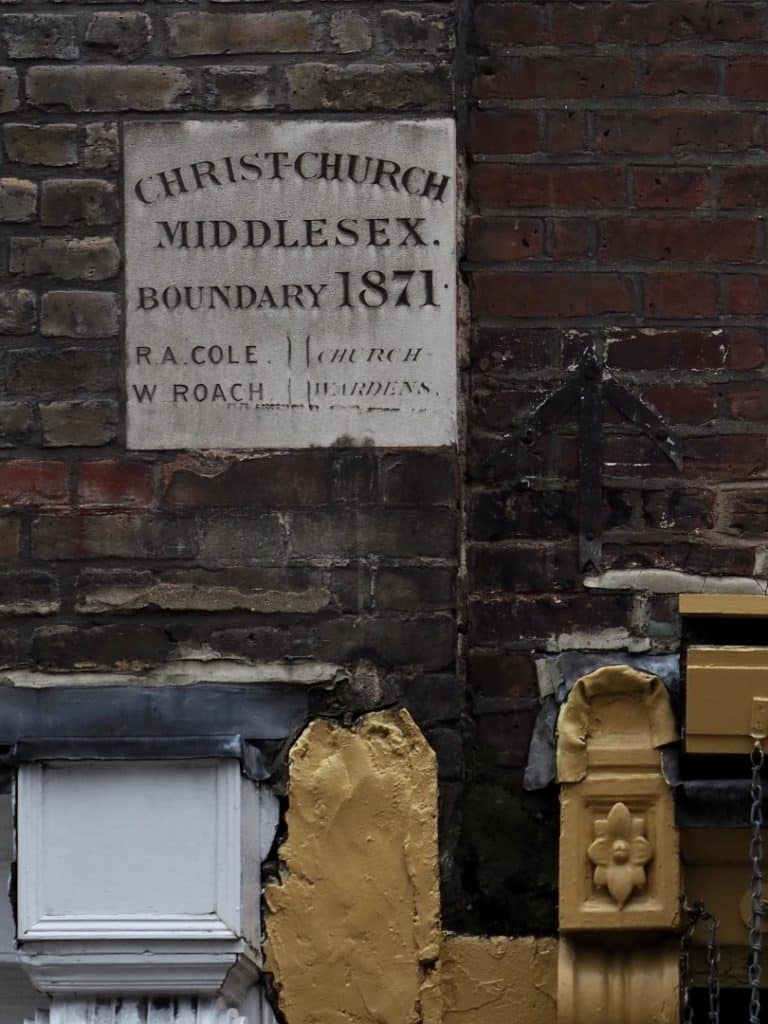 This is a Church parish boundary marker, telling us that everyone who lives on the left hand side of this stone belongs to the Parish of Christchurch Spitalfields.

If you’ve got good eyesight you can spot the name of Church Warden; Robert Andrew Cole who lived here in the 1870s. His great-great-Granddaughter Kate Cole has done some brilliant research into the family history and you can read more about their story here.

But look again at the white stone, just to the right of it is a black iron arrow.

This is a broad arrow, symbol for the Board of Ordnance; a government body that supplied munitions and military supplies established in Tudor times. Its HQ used to be nearby at the Tower of London.

Most of this area of Spitalfields was owned by Priory of St Mary Spital. But after it was dissolved by Henry VIII in 1539 during the reformation, the land passed to the crown and was used as artillery grounds. 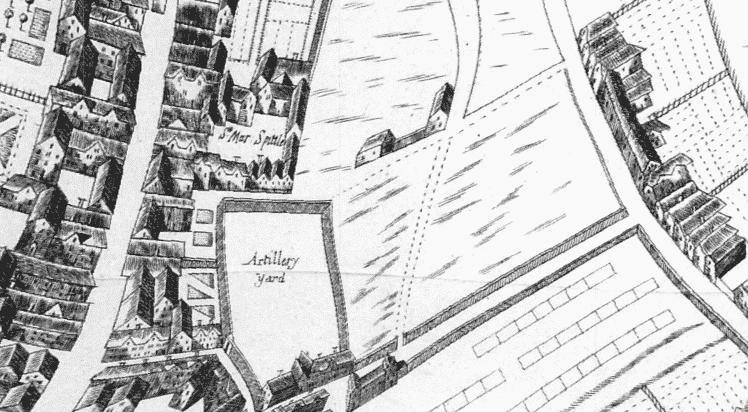 You can see the Artillery Yard marked out below St Mary Spital in the W Faithorne and R Newcourt Map of 1658 (again, from Layers of London)

There’s also another broad arrow symbol in the faded sign above the aptly-named street; Artillery Passage. 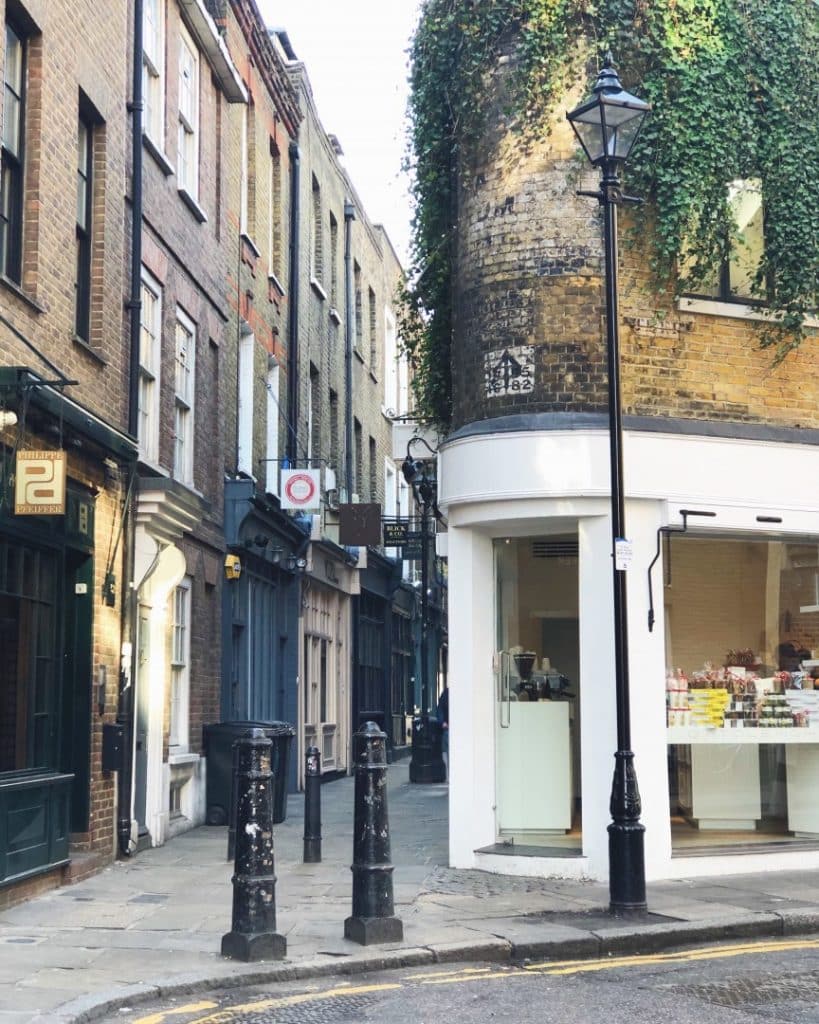 But back to no.42 Brushfield Street…

If you’ve been to Spitalfields in the last 10 years, the picture below will probably be most familiar; 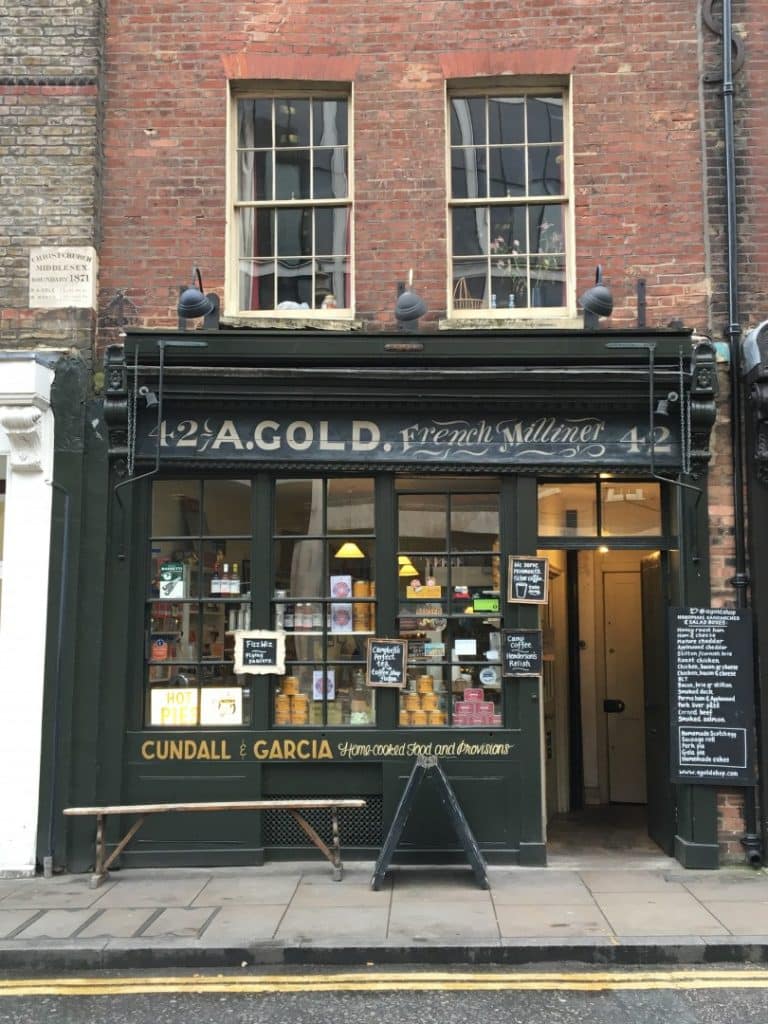 Philip Cundall and Paolo Roberto Garcia ran a deli from 42 Brushfield Street from 2012, taking over the deli that had been run by Ian and Safia Thomas since 2000. Philip and Paolo now run the English Restaurant, a few doors down.

But in 2018 Spitalfields locals were shocked to see the appearance of a new business in the form of a bright repaint. 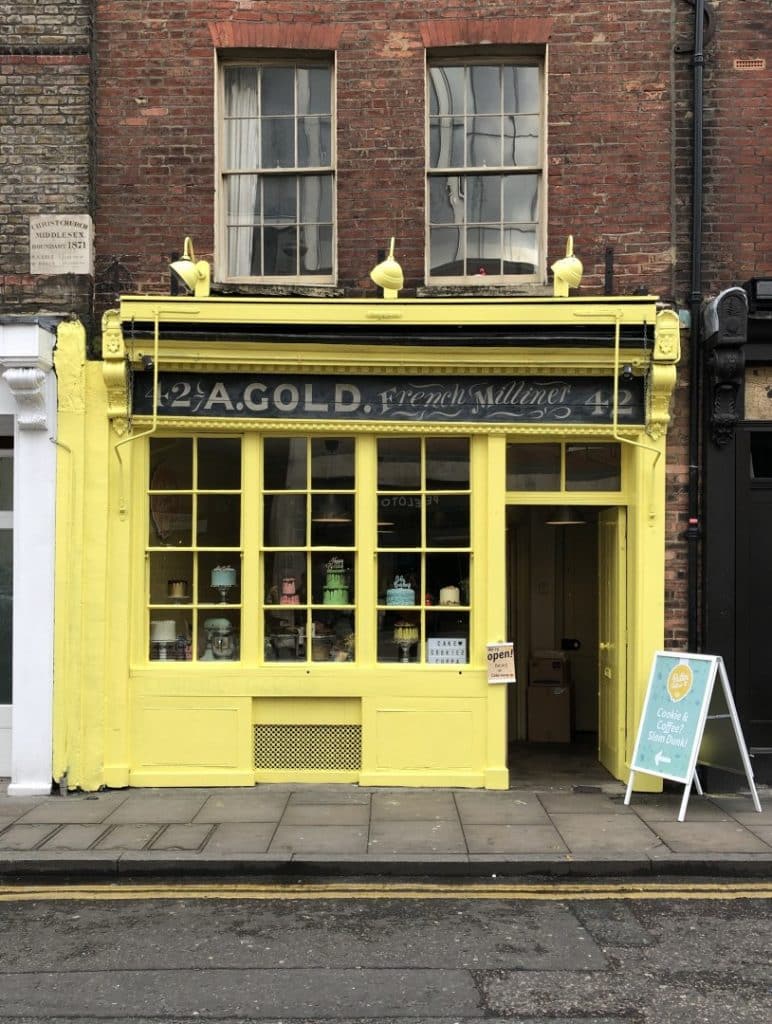 After protecting the original signage, Butter Believe It covered it with their own branding. 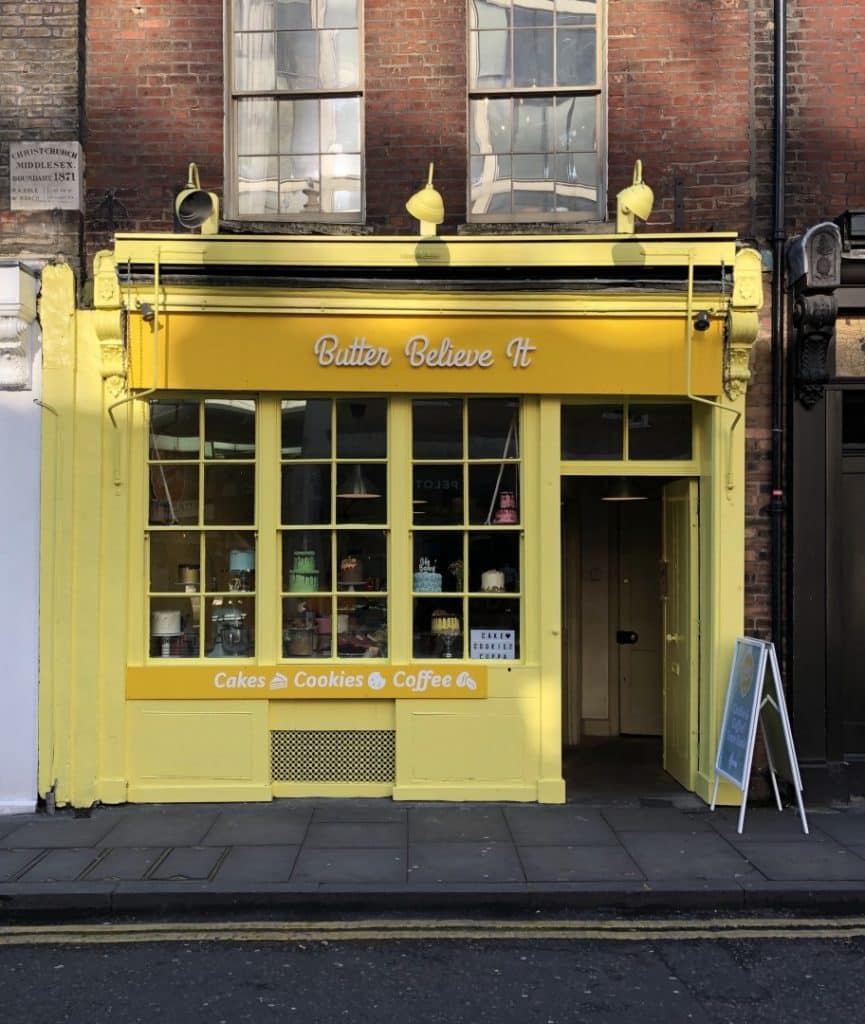 Understandably, there was a lot of shock and outrage at this, mostly directed to the new owners across social media. Although the paint was a little bright, the vitriol was largely down to a misunderstanding that they’d unthinkingly painted over the sign.

Over the next few months they also changed the yellow to a – thankfully less luminous – mustard tone.

From the picture below from Spitalfields Life, we see a very different shop front in the 1985 and no sign of A. Gold. 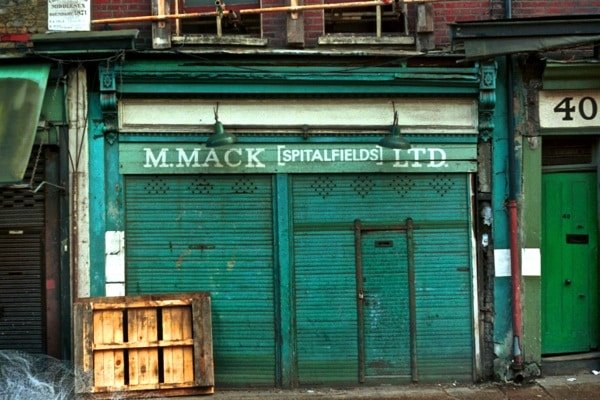 However, in 1987, 42 Brushfield was bought and renovated by a Spitalfields resident and designer Marianna Kennedy. The artist Jim Howett restored the original A. Gold. signage in 1996, picking the later paint off the board to reveal the late 19th century sign.

So although it was only revealed again in 1996, it is actually original.

It seems that until a permanent tenant is found, no.42 will have a series of short-term pop-ups in the store. I rather like the sound of this, celebrating the small independent businesses that once filled Brushfield Street in the 19th century.

However, I have recently seen that the whole building – leasehold – is available on Modern House, for £2.3million so who knows what will become of it..?