The Gargoyles on 51-54 Gracechurch Street

in architecture, City of London, London, Look Up London
3 Comments

Look up above the Santander at 51-54 Gracechurch Street and you spy a collection of gruesome-looking gargoyles* staring down at you. 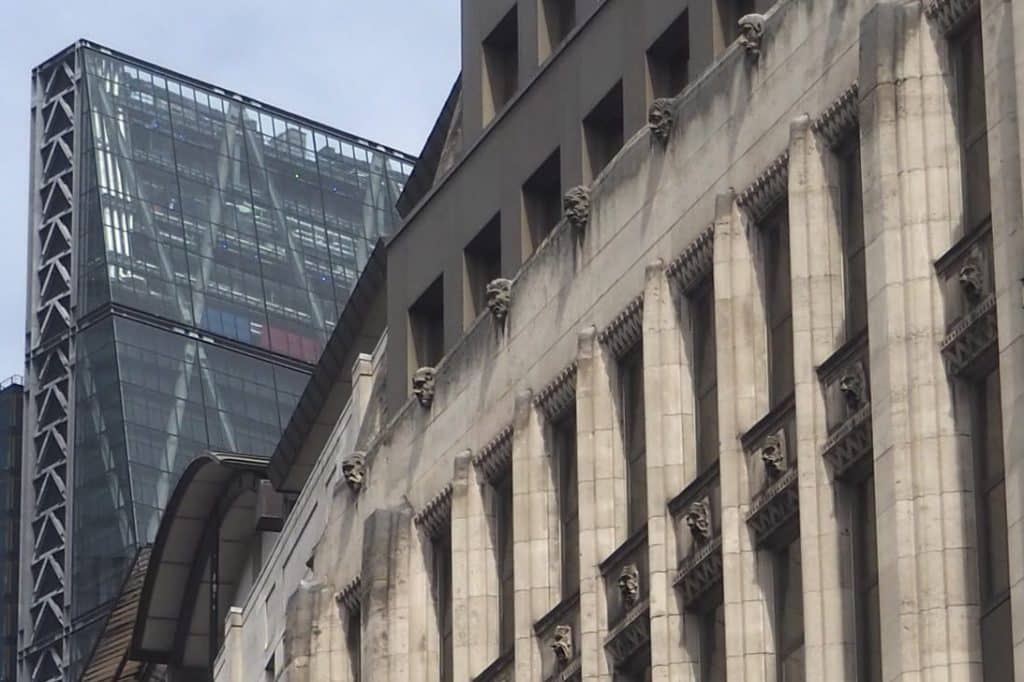 Having previously written about menacing demons in the City of London here, I was intrigued to find out more about these poor souls… 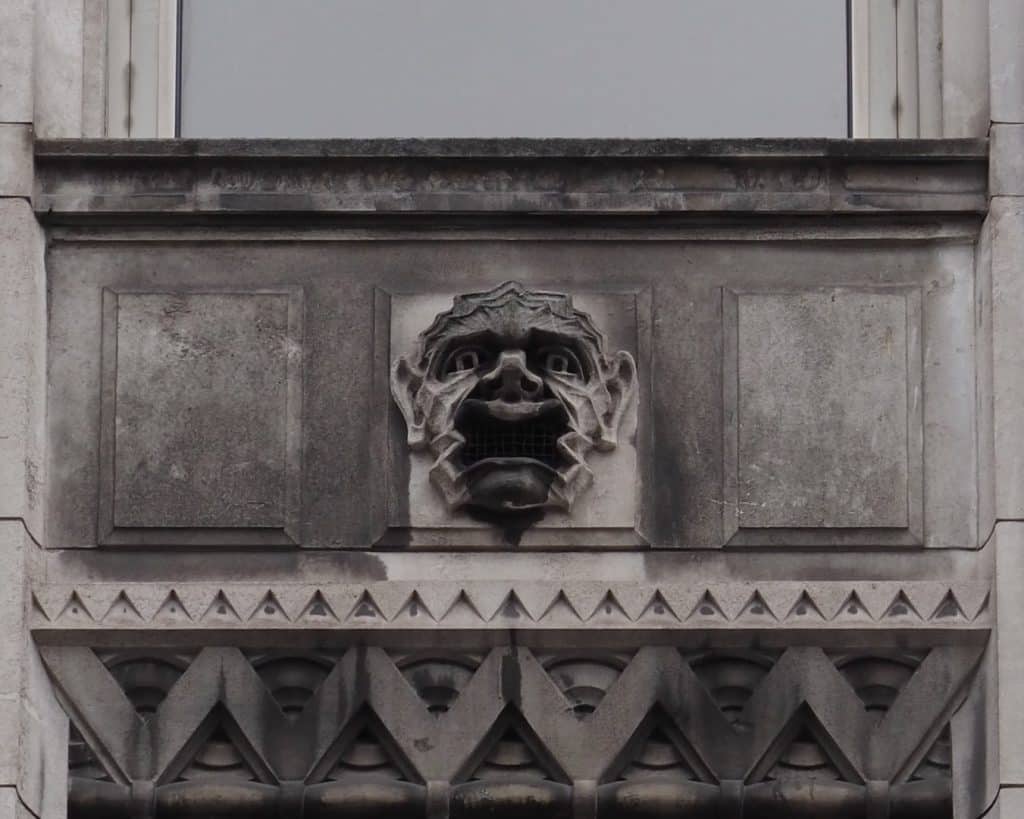 *Ok, so technically they’re grotesques, not gargoyles (they’re only gargoyles if they have water spouting from them)

Built between 1928-30 and designed by Leo Sylvester Sullivan, there’s not much further information about the faces or why Sullivan chose to include them. 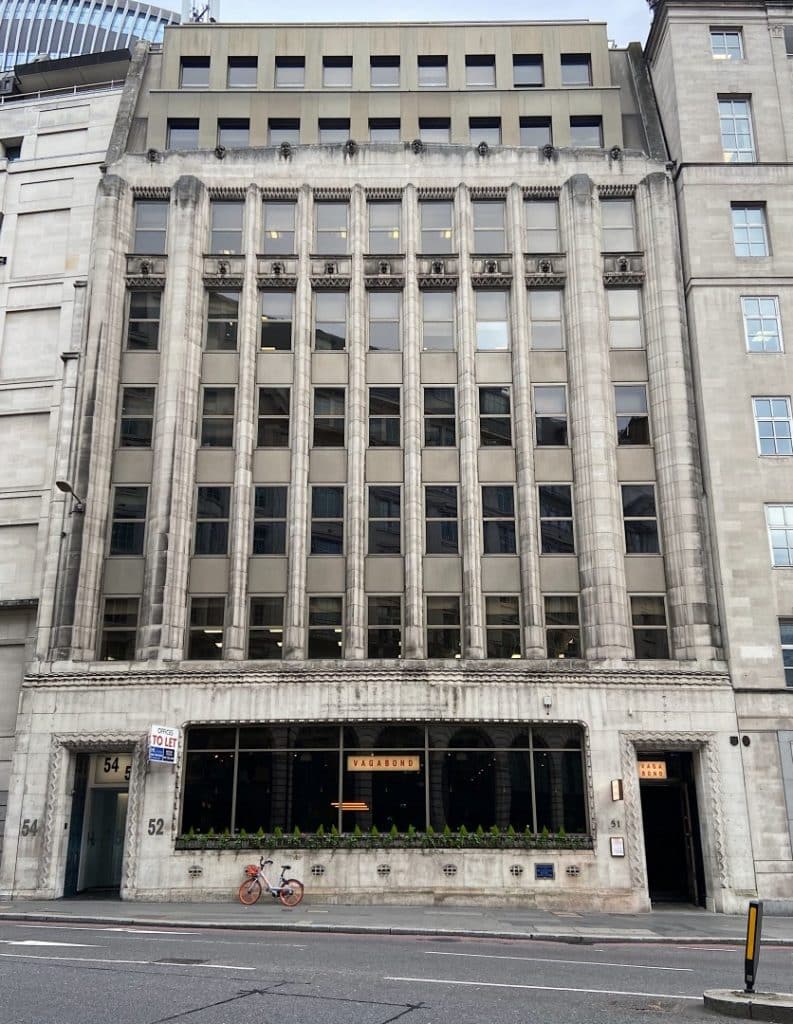 Pevsner doesn’t make any mention of the curious faces or who carved them. However, Sullivan regularly worked with a sculptor called Henry Poole, as mentioned in three buildings listed by Historic England; St Martin’s House and 37-39 Lime Street in the City as well as 233 Shaftesbury Avenue in Westminster.

However, the plot thickens as the only sculptor named Henry Poole that I can find any information about died in 1928. Also his style was far more Arts and Crafts, verging on Art Nouveau but not similar to the sculpted faces here.

Though 51-54 Gracechurch Street isn’t listed, it contains many similar features to the others; strong vertical lines and neo-Egyptian and Greek stylistic details. 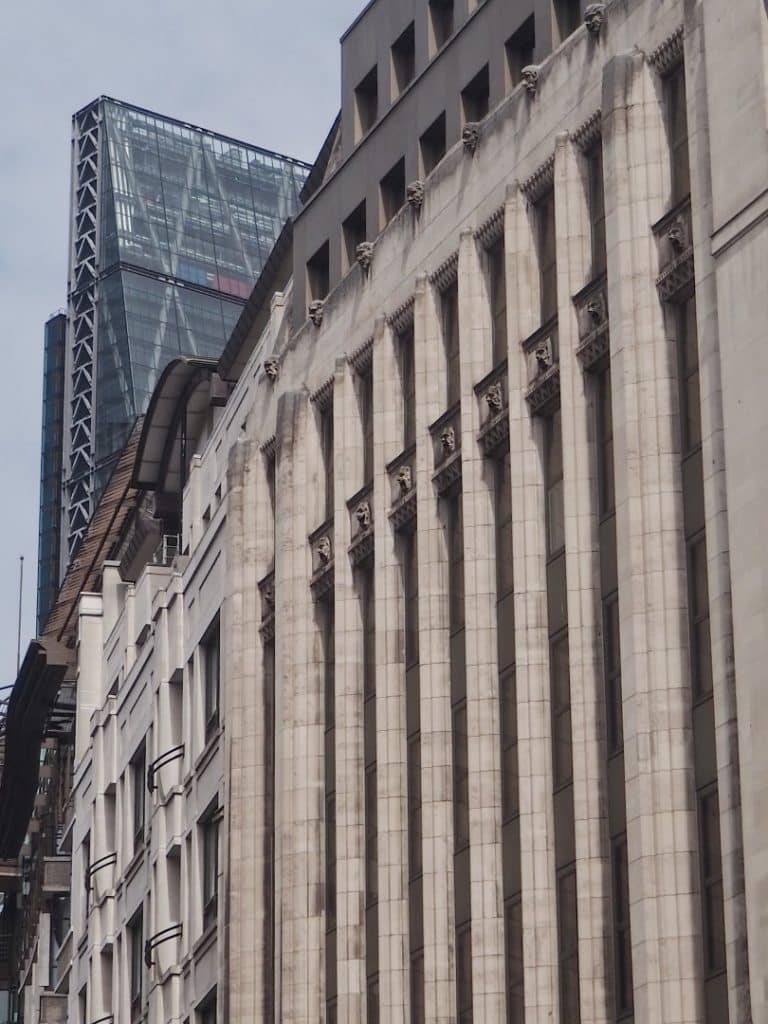 As well as looking out for the faces along the top of the building, it’s worth peering into Talbot Court to admire the side of the building; covered in classic Art Deco motifs of zigzags and chevrons. 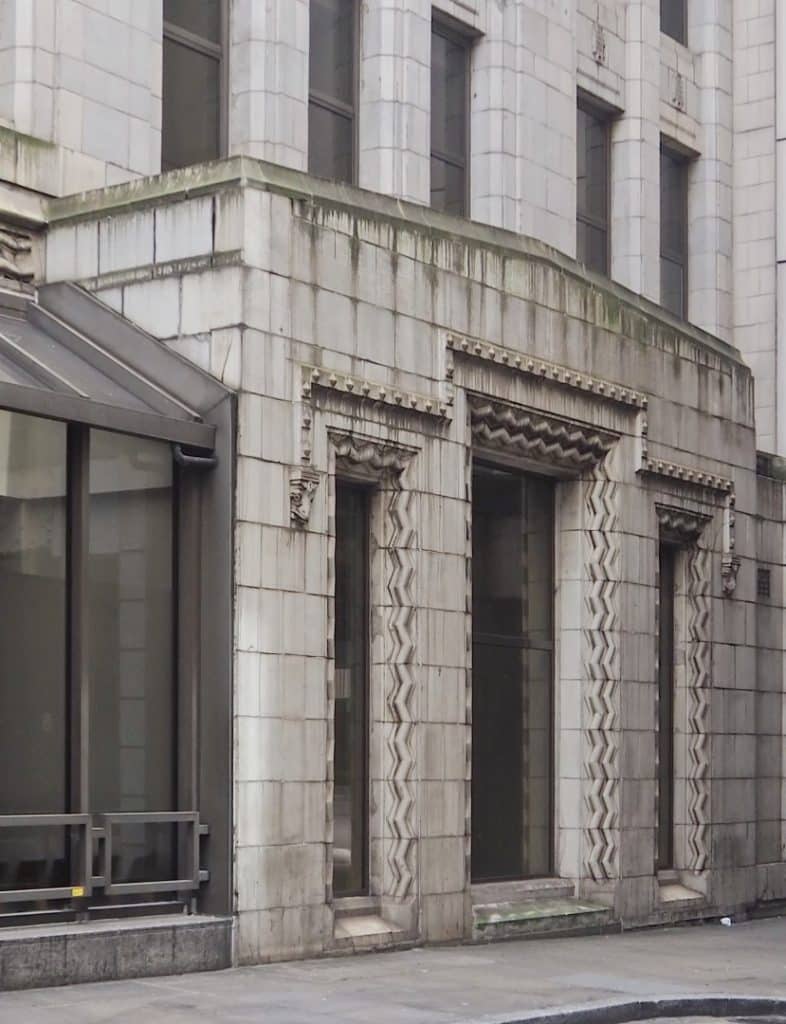 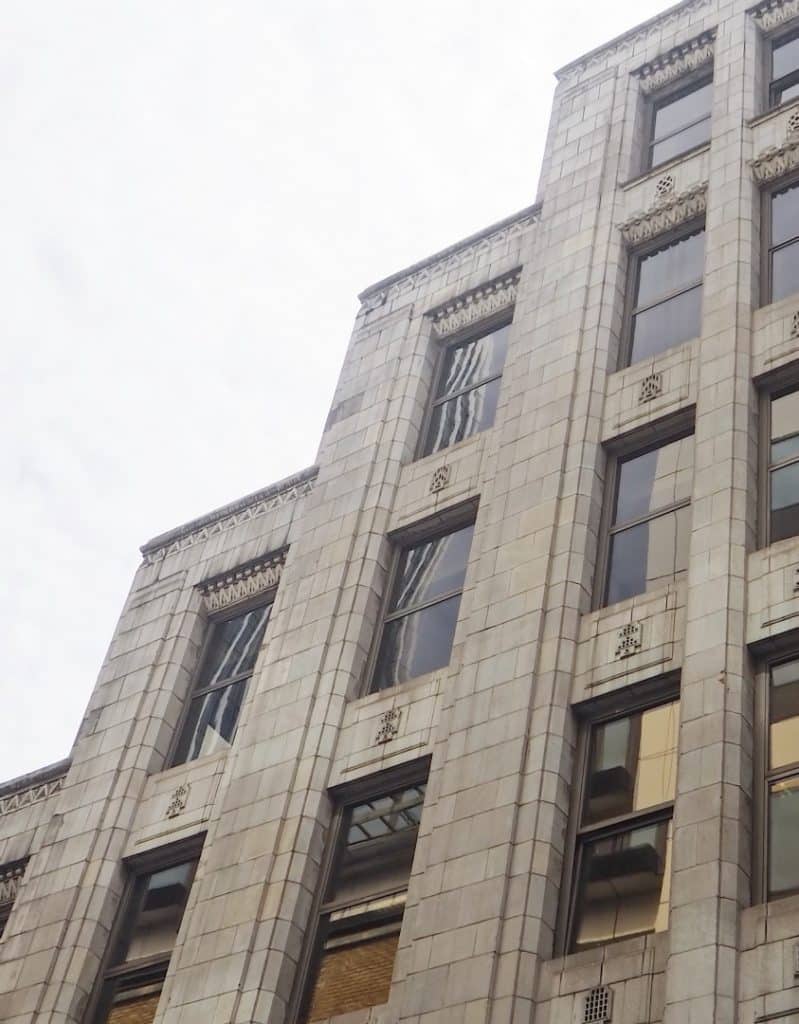 But let’s have a closer look at the faces…

There are two levels of highly animated faces, the lower ones contain more geometric elements and are set above a zigzag frieze;

While the upper ones are more human-like and show a range of emotions; shock, bewilderment, disappointment and even happiness!

A very old thoroughfare, Gracechurch Street was formed in the 10th century to connect the old Roman Road of Bishopsgate with London Bridge. Its name – claims John Stow – comes from a grass or haymarket on the site.

In researching the post I had hoped that the street’s history might provide some clues to the building’s appearance. However all I stumbled across was this hilariously scathing conclusion from British History Online;

“Some London streets seem determined never to distinguish themselves. No mediaeval scuffle has ever occurred in them; no celebrated church hoards its monuments; no City hall cherishes its relics there; no celebrated person has honoured it by birth or death. Gracechurch Street is one of these unambitious streets.” – Walter Thornbury, ‘Cornhill, Gracechurch Street, and Fenchurch Street’, in Old and New London: Volume 2 (London, 1878), pp. 170-183. British History Online

Ouch. However, perhaps that’s being too hasty. The City of London have erected one of their own blue plaques to commemorate a notable former resident; William Curtis, an 18th Century botanist. 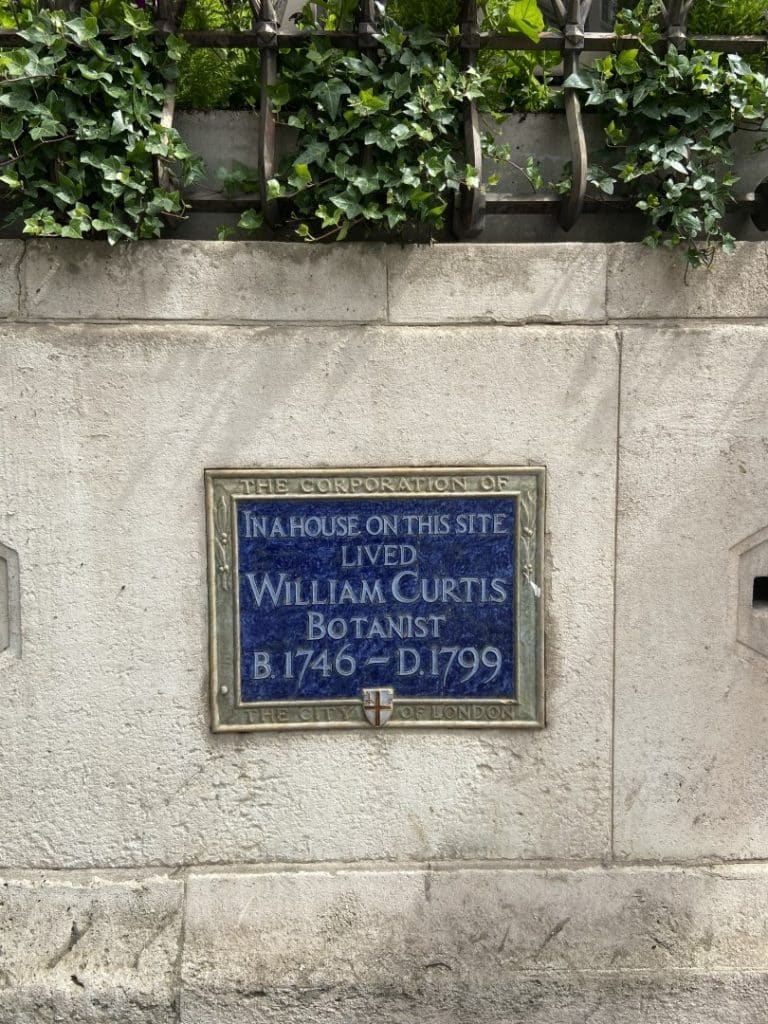 Curtis published Flora Londinensis (first appearing 1777), a study into the flora found in London which was aimed for the general reader and made accessible through the addition of illustrations, common names and other names of plants and flowers.

So no link with the curious faces, but an interesting historic figure nonetheless. 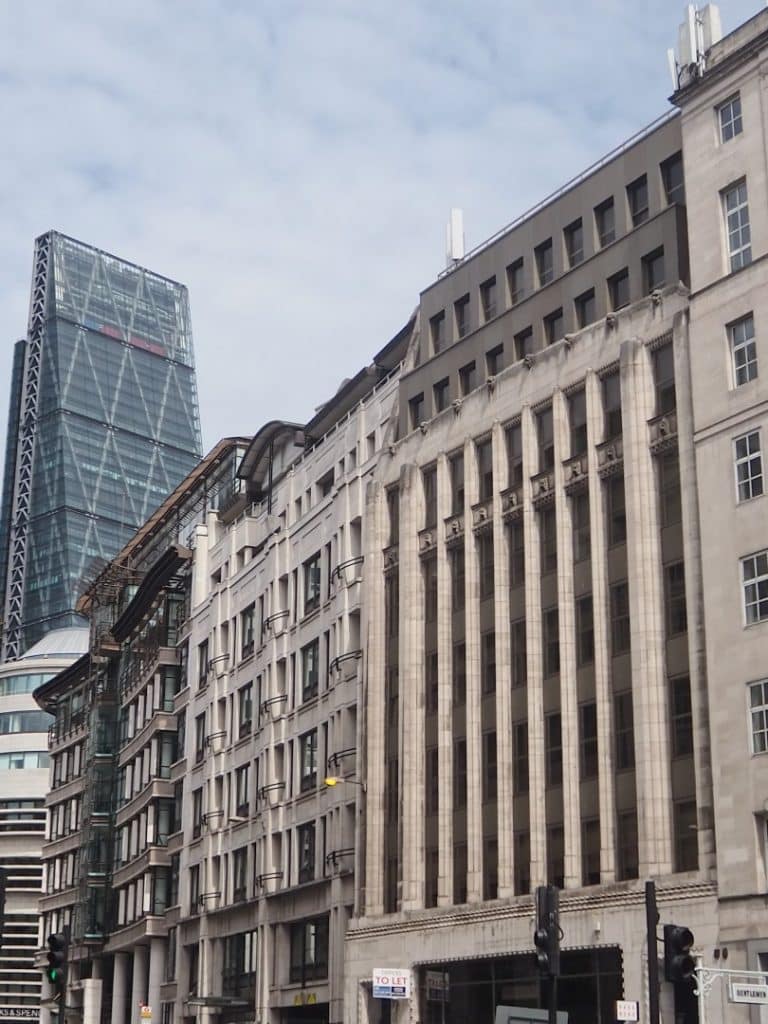 Have you noticed the faces before?

They certainly provide a bit of a break from the surrounding plain stone, glass and steel.