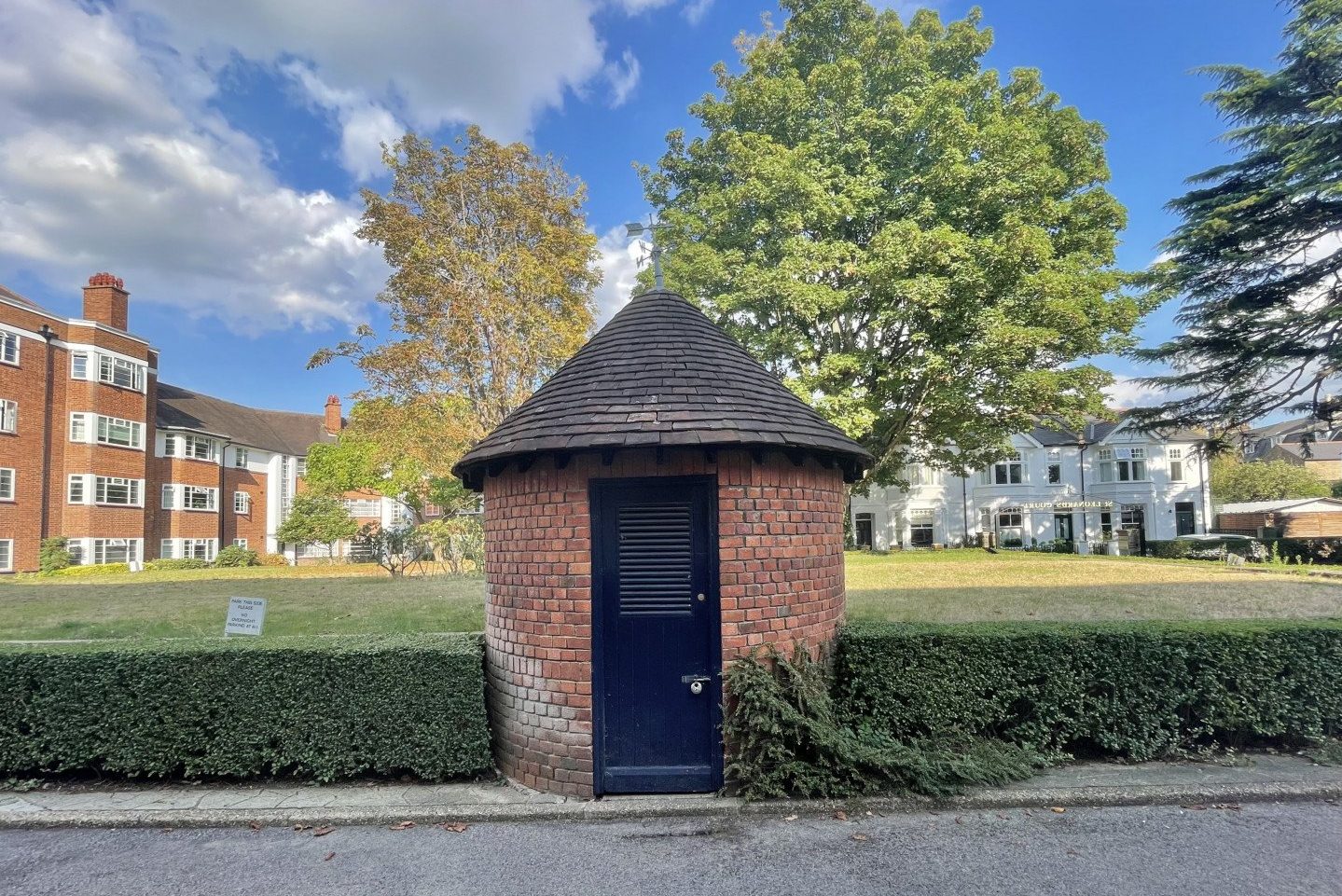 While planning my recommendations for the 2022 Open House Festival, one listing quite literally made me hop on the next train to Mortlake. It’s a surviving Air Raid shelter in St Leonard’s Court.

St Leonard’s Court was built 1934-38 by Mr FG Fox, a local builder who also built nearby Deanhill and Queen’s Courts. The architect is listed as Philip A W Roffey.

It’s an attractive Modernist block, originally comprising of 83 flats but is fairly unremarkable aside from this curious addition…

Appearing like a gardener’s hut, you’d never guess that this round brick building contained a WWII Air Raid shelter.

In October 1939 Philip Roffey submitted an application to construct an underground room that could hold 120 people. At first the idea was just to have a single room, with benches running along both sides of the walls and chemical toilets at either end.

By September 1940 second set of plans were submitted, adding ‘night rooms’ that had 48 bunks. The ‘E’ marks stand for emergency exits, ladders leading to hatches.

Sadly when I visited over the Bank Holiday the porter wasn’t available to show me inside, but there are some photos from the nearby information board;

Thankfully you can get an idea from the 360° tour from the website cyclops.info

The scale of the shelter is hard to grasp from images but it seems really extensive. Local charity Habitats and Heritage recently restored the shelter so you can appreciate the extraordinary care and attention that went into the project.

Details like the numbered pegs in a beautifully elegant font (see on the left hand side of the image below).

It’s hard to put yourself in the desperate situation of an Air Raid of course, but the chemical toilets – despite the brick screens – still don’t seem that appealing.

During The Blitz there are 140 people living in St Leonard’s Court but this shelter couldn’t accommodate all of those people. The reality seems to be that people didn’t spend consecutive nights in the shelters and you had to pay £7 for a yearly rent of a bunk.

So I guess the big question is, was it useful? Did it save lives?

Looking at the bomb damage maps, Mortlake and Barnes did suffer aerial bombardment during The Second World War but thankfully there weren’t a huge amount of fatalities in the area.

According to the Barnes History website there were two direct hits on air raid shelters but, as you can see from the map below, no bombs appear to have dropped too close to the St Leonard’s Court shelter (its location is circled in blue).

You can view an interactive version of this map (where each red dot lists the date of the bomb and level of damage) online here.

If you want to see inside the St Leonard’s Air Raid Shelter for yourself, it’s available to view as part of Open House Festival and one of my recommendations. See them all here.

Another surviving London WWII shelter available to visit on tours is Clapham South Deep Level Shelter (picture below). You can read more about it from my visit here.