in London, London Underground, Look Up London, Things to do in London
2 Comments

Take a stroll along the Strand, if you look up you’ll notice an intriguing archway with a sealed-off entrance. Though the signage has a different name (more on that later) this is Aldwych Ghost Station.

Aldwych closed to passengers in 1994 and though it was never a successful station, from its opening in 1907 until then it still played an important role in London’s history.

As our small group enters for our tour we are greeted with the tinny sounds of Vaudeville music, a reference to the Royal Strand Theatre which stood here until 1831.

Along with the run-down theatre that was demolished, huge sections of the area’s slums were being removed, making way for the Piccadilly line.

One of three lines created by the UERL (Underground Electric Railways Company of London), Holborn became the centre of the new Piccadilly line which merged two separate lines.

Known as the Great Northern, Piccadilly & Brompton Railway – catchy! – It ran between Hammersmith and Finsbury Park.

But what about Aldwych station? It was just a Southern terminus off-shoot of this line, the image below showing it’s lonely position;

It opened 30 November 1907 as Strand Station, but the name changed in 1915 to Aldwych. Confusingly this was because the nearby Northern Line Station Charing Cross called itself Strand. Much later in 1979 the name was changed back to Charing Cross!

Down on the platforms you can see the painted letters of ‘Strand’.

As you can probably guess from looking at the map, Aldwych didn’t get much footfall, only around 450 daily passengers.

For a bit of comparison (taking into account London’s larger population than 100 years ago) Victoria got an average of 234,000 daily passengers in 2015.

The station wildly overestimated its popularity, planning for three lifts. Through the grille below you can see the shaft, but no lift in its place.

And that’s not the only place they cut corners.

These tiles – although today we might think them glorious – were the cheapest option. Each tube station was meant to have a unique colour and pattern of tiles, helping illiterate or foreign Londoners navigate themselves without signage.

I don’t want you to have a false impression that Aldwych was useless. Here’s a few of the useful roles it’s played…

Like many stations in Central London, Aldwych was used as a bomb shelter. Its original design had two parallel tunnels but even by 1914 only one platform and tunnel was ever used. This made a perfect space for sheltering Londoners.

Julian Andrews, a child during WWII, was interviewed by the London Transport Museum during their research and described;

“Hundreds and hundreds of bodies wrapped in blankets down there.”

The above photo from 1941 was actually a staged government propaganda shot, designed to show children tucked up cosily underground, blissfully unaware of their City being bombed above.

But it wasn’t just people either. Given its proximity to big museums like National Gallery and British Museum, objects like the Parthenon Marbles were stored safely 33m underground!

After The War, train services began in July 1946, but there was still the extra platform and tunnel with around 76m of dead end space.

The museum store remained a quarter full right up until 1955.

And the platform walls were put to good use as a testing space for new tile designs! 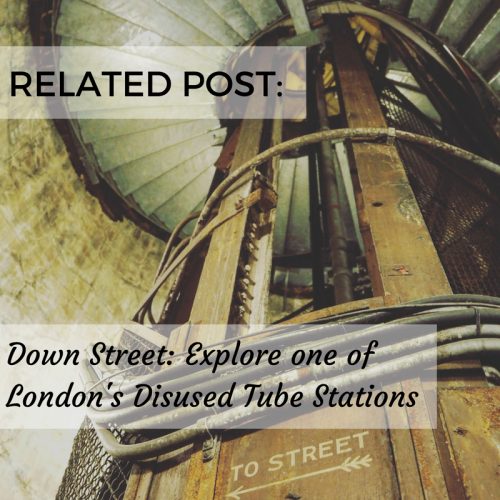 Today the station is mainly used for filming.

This can be for the music industry (The Kinks, Madness & Prodigy – for Firestarter filmed videos here) but also film. Any time you see a period film with an underground location, it’s likely it was filmed at Aldwych. Highlights include The Darkest Hour, Atonement and V for Vendetta.

With its atmospheric setting it’s easy to see why.

There’s also the allure of original features like this 1972 stock train;

And advertisements from decades ago. Oddly, one is now rather relevant..

Hidden London (part of the London Transport Museum) run tours across a range of TFL property and you can’t find out more here. If you’ve missed out on tickets, I’d advise signing up to their mailing list to be the first to hear about future tours of subterranean London shelters.

Meanwhile you can see how I got on with other Hidden London tours, including Clapham South, 55 Broadway and Down Street Ghost Station.