American History in the City of London

in Churches and Graveyards, City of London, London
25 Comments

I recently organised a private virtual tour focussing on the American history hiding in the historic City of London.

To be honest I was surprised just how many fascinating connections there were to the United States so I thought I’d share some of my favourites here too!

Known as the Journalist’s church, St Bride’s has plenty of connections with printing and the papers that used to be based on Fleet Street.

The magnificent spire (reportedly the inspiration for traditional tiered wedding cakes) was struck by lightening in 1764 and King George III wrote to Benjamin Franklin for advice on its repairs. Apparently the pair couldn’t agree on whether the lightning conductor should be blunt or pointed. You can read about the disagreement here! 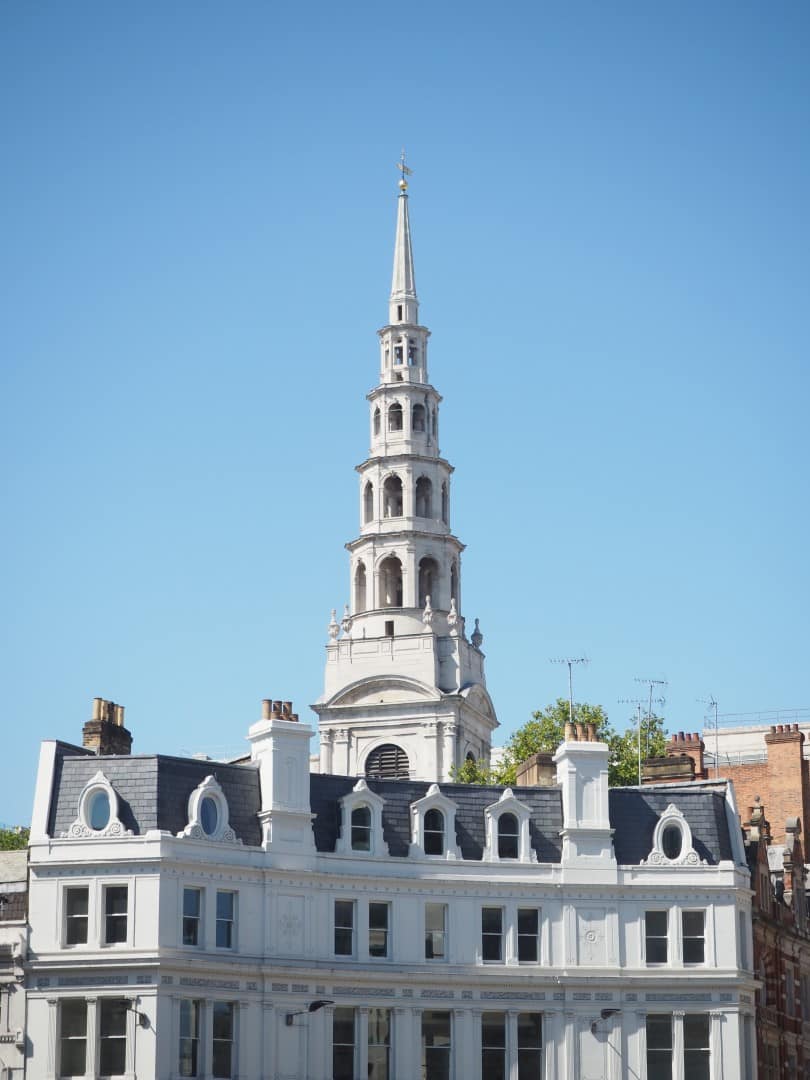 However, there’s more American history inside, including the 1957 reredos below. 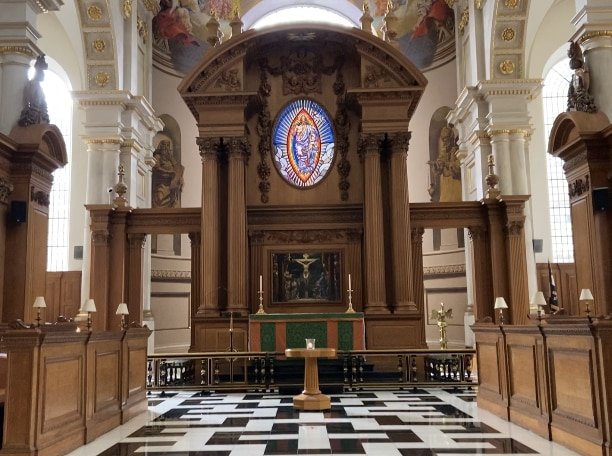 On the right hand side there’s a dedicating to the memory of Edward Winslow and the Pilgrim Fathers. In 1613 Winslow was an apprentice stationer (The Worshipful Company of Stationers then managed the printing trade) and his parents were married in St Bride’s.

Winslow sailed on the Mayflower in 1620 and later became the Governor of New Plymouth, re-elected twice.

Another connection can be found in a small bust carved by Clare Waterhouse, replacing an earlier marble carving by Marjorie Meggit; 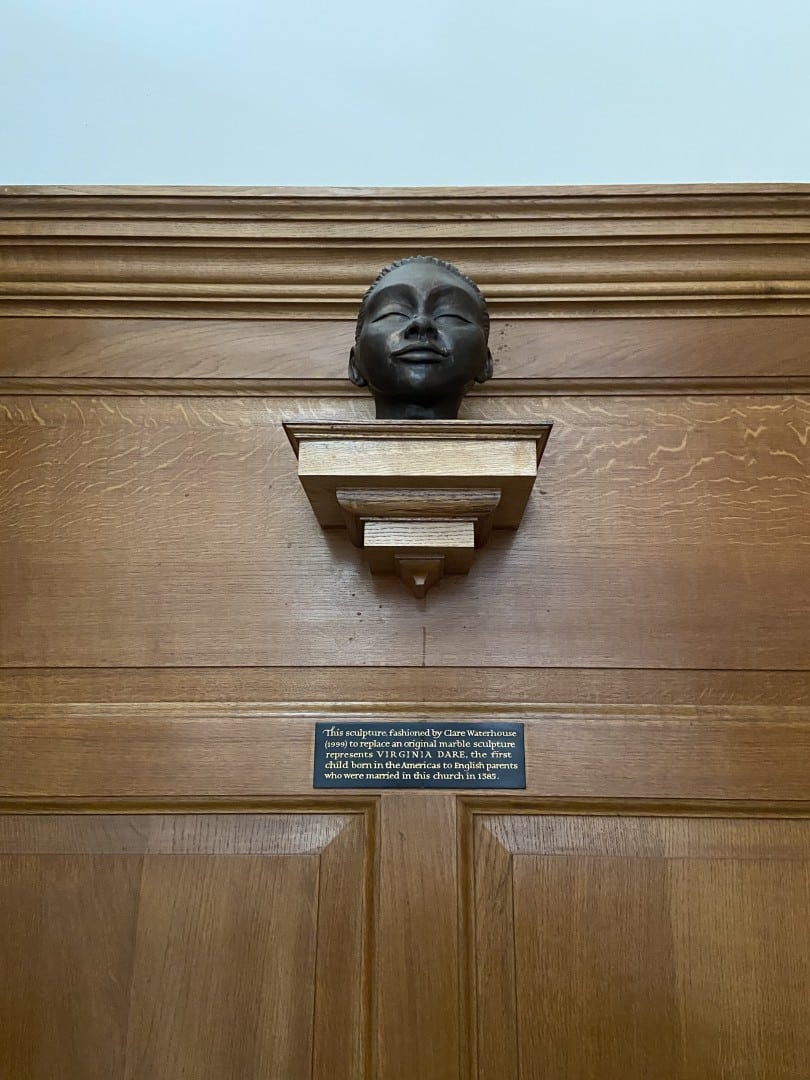 It represents Virginia Dare, the first recorded European child to be born in North America. Her parents had been married here before sailing to Roanoke in 1587.

This swaggering chap doesn’t look quite the same as Disney’s re-imagining of him, but you can find his sculpture outside St Mary Le Bow Church. 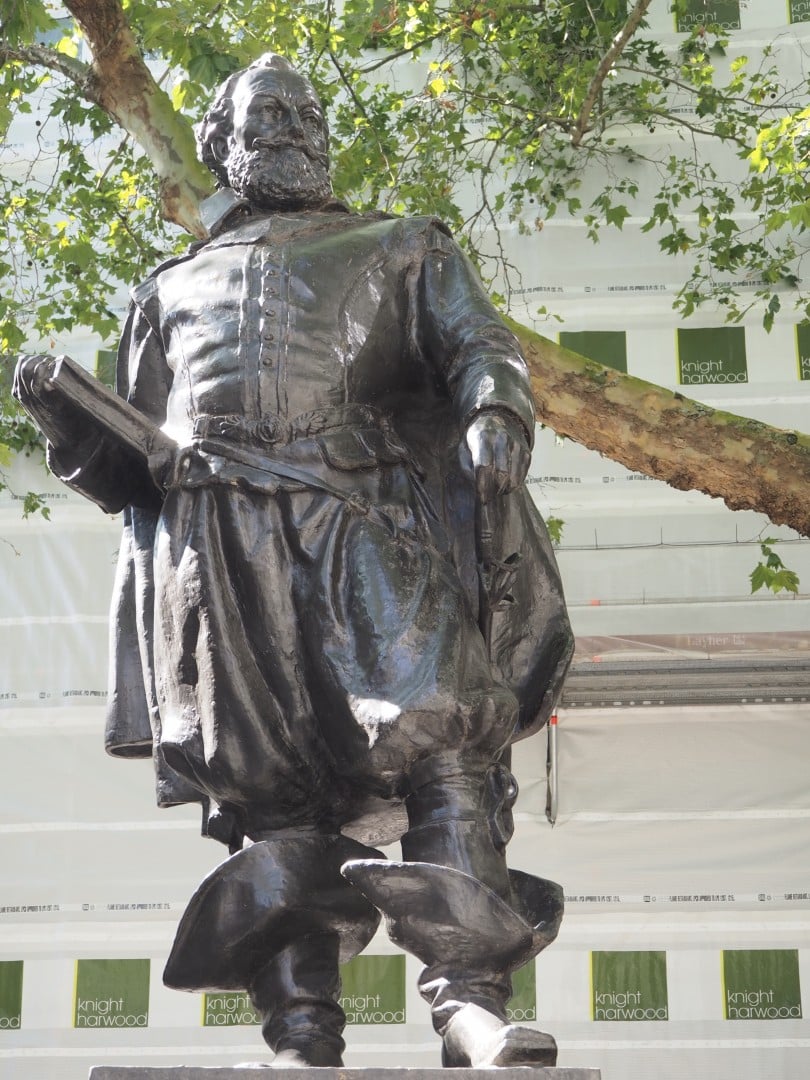 Smith first sailed to Virginia in 1606 and was part of the first settlement in Jamestown in 1607. A year later he sent back his story of attempting to build relationships with the local Indian chief; King Powhatan which was published at the sign of the greyhound in St Paul’s Churchyard.

Perhaps inevitably, relations between locals and invaders soured and it was then that the young Princess Pocahontas intervened, saving Smith’s life.

Smith returned to the ‘New World’ multiple times and advised the Mayflower expedition. He is buried in St Sepulcre-without-Newgate.

Just behind Guildhall is another churchyard with US connections, although you’ll struggle to find the church itself.

Destroyed in The Blitz, St Mary Aldermanbury was never rebuilt. Instead it was bought by Westminster College in Fulton, Missouri and re-assembled across the pond!

It was bought by the college as a memorial to Winston Churchill, erected a year after his death in 1966. It was at Westminster College that in 1946 he had given his famous ‘Iron Curtain’ speech.

There’s a helpful plaque in the gardens to show you what the church looks like today; 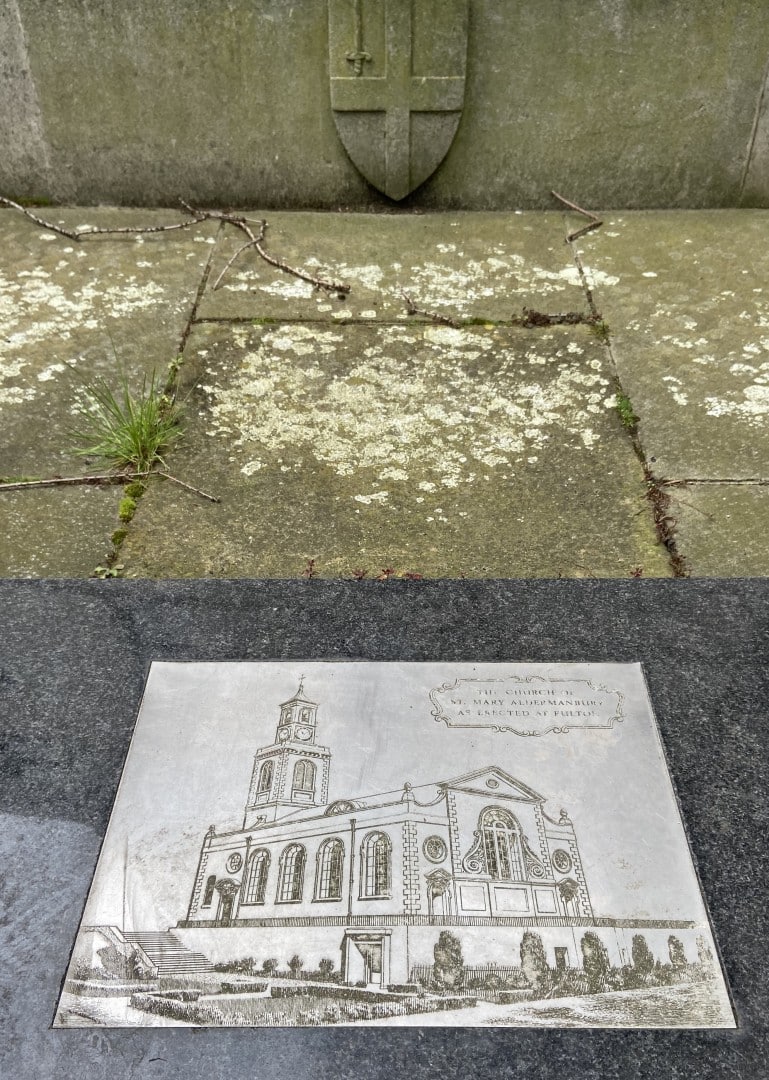 It’s one of London’s most iconic buildings, but there’s a surprising amount of American connections in St Paul’s Cathedral.

Behind the high altar in the East End sits the American Memorial Chapel. This part of the Cathedral suffered the most damage in The Blitz and was rededicated in 1958.

Little clues to American history can be found in the railings in front of the altar below. As well as dates relating to the Cathedral, there’s also the dates 1607 (Foundation of Jamestown) and 1776 (Declaration of Independence) embedded into the ironwork. 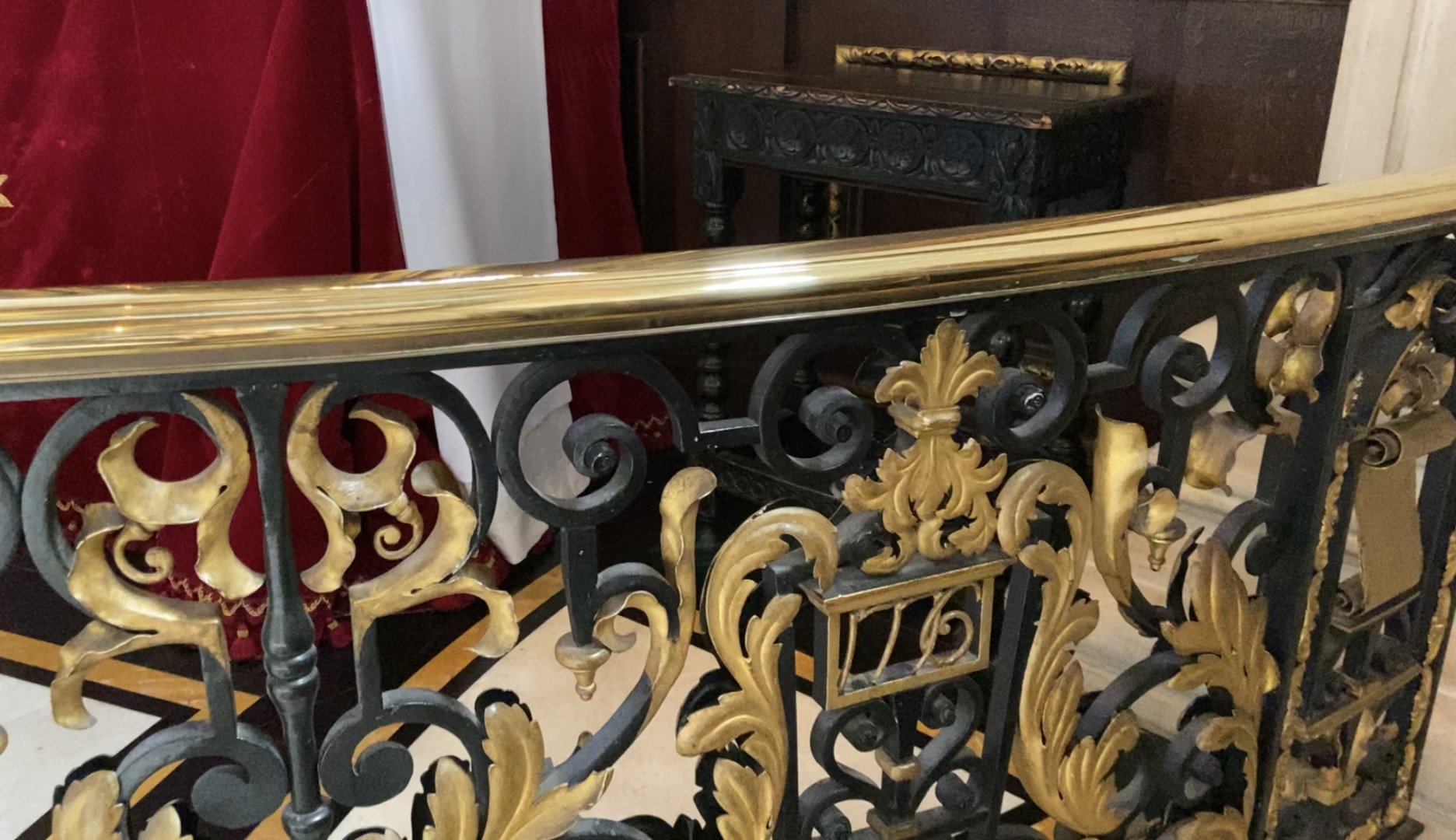 The chapel is a place to quiet contemplation and contains a Roll of Honour to the 28,000 American servicemen who were stationed in the UK, and gave their lives, during the Second World War.

There’s a facsimile copy nearby where – if you ask a member of staff – they can help you find a particular name. 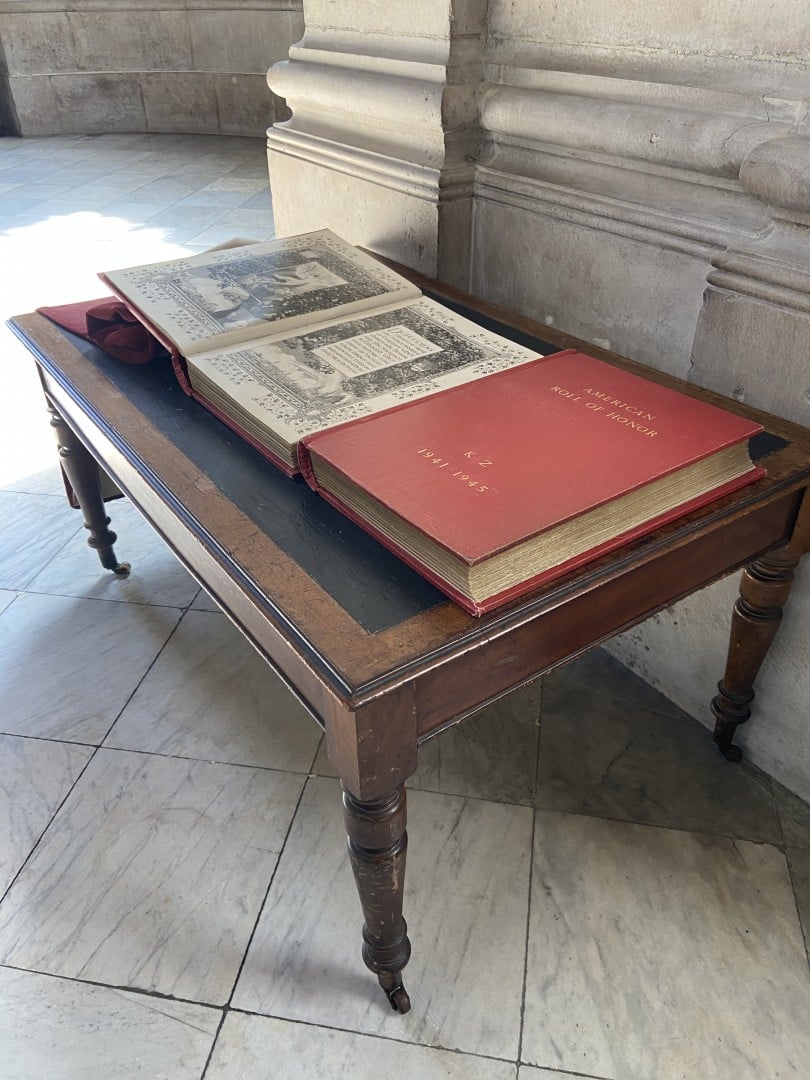 In the crypt of St Paul’s Cathedral you can also find a memorial to Billy Fiske, a pilot who fought with the British during the Battle of Britain. His plaque reads; “An American citizen who died that England might live”.

Around the back of the Royal Exchange sits a distinguished-looking gentleman. 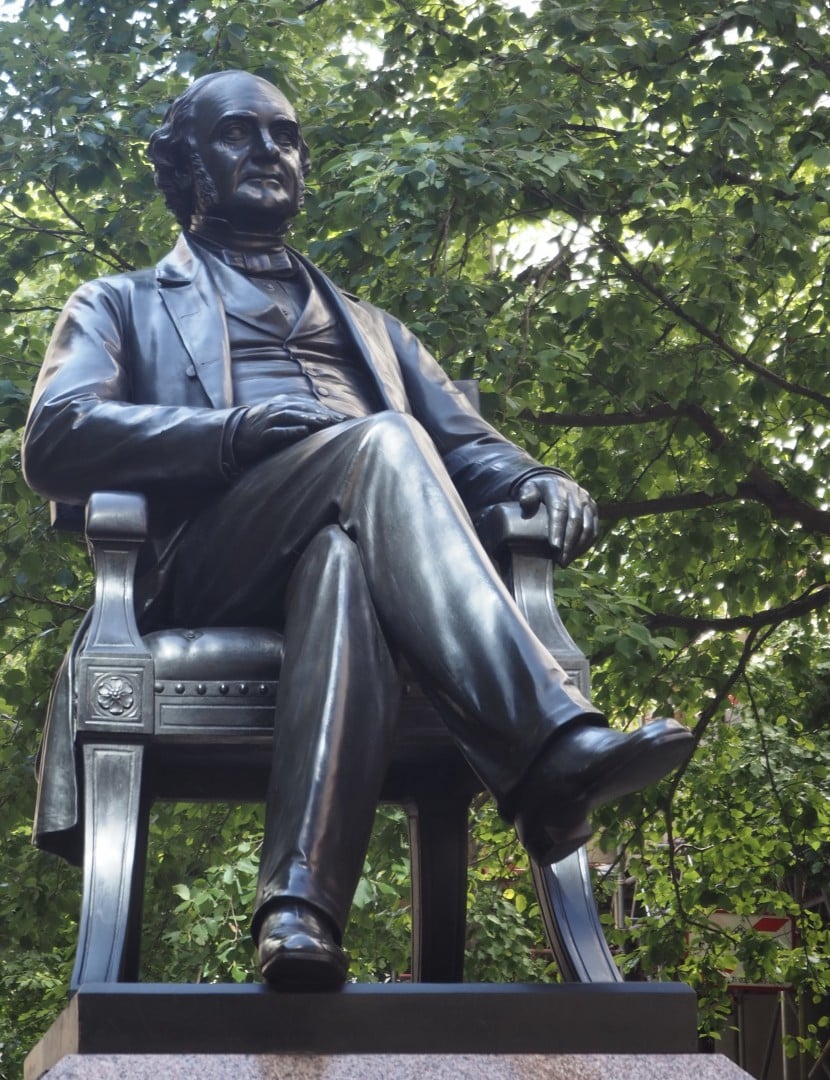 George Peabody was born in Massachusetts in a small town that’s now been renamed after him. He worked his way up in sales and banking, eventually moving to London.

He was deeply moved by the deprivation of UK workers and with no heirs to leave his wealth he founded the Peabody Trust to help with the Country’s housing crisis. Today the Peabody Housing Association manages 55,000 homes across Greater London.

Found any more surprising American connections in the City? Let me know in the comments!