Go Behind the Scenes at Westminster Abbey

in architecture, Churches and Graveyards, Interiors, London, Look Up London, The Classics, Things to do in London
0 Comments

As a Blue Badge Tourist Guide, I spend a lot of time guiding in Westminster Abbey. However, I had a real treat recently joining a Hidden Highlights tour where we went behind the scenes, to areas not usually open to the public.

I’ve previously written about the best sneaky details in the publicly accessible areas in another blog post here. But let’s see some of the hidden bits…

First, a potted history to get our bearings. Westminster Abbey is our Royal Church, where monarchs have their coronation ceremony. It’s also a burial site, not just for the 30-odd Kings and Queens but also a staggering 3,300+ others including Charles Darwin, Isaac Newton, Charles Dickens and – recently – Stephen Hawking.

The first church was established in 960AD by Saint Dunstan who settled here with a group a monks. The next major building was by Edward the Confessor, who constructed an elaborate Abbey in the 11th century. But the building we see today is mostly down to King Henry III who in 1245 ordered a new Abbey.

When we look at the building today there are two major later additions; the Lady Chapel (constructed 1500s and seen on the left in the illustration above) and the West Towers (1700s and seen below).

Image Credit: Public Domain – Canaletto, A Procession of the Knights of Bath, 1749.

There’s a brilliant 4 minute video of the stages of construction from Westminster Abbey here.

One section of the Westminster Abbey complex that we can’t see today is the Sacristy. It was an area where monks kept the sacred items used during mass and was built in the 1250s under King Henry III.

From the outside today all you will see are these hoardings, but on the tour we went behind them to get a closer look at the ruins.

Interspersed amongst the stones are many burials, some of which are thought to be 12th century monks.

The Great Sacristy was demolished in the 1740s but its now part of a major refurbishment plan to create a new visitor entrance to allow the public to enter through the West door rather than the side, North door.

This is the spectacular view that greets you as you enter the West Door into the Abbey.

Visible behind the gift shop as you enter the Abbey, the Jerusalem Chamber is Medieval.

The inside has been much altered but the roof is authentic, dating from the 14th century, albeit restored in the 1950s.

In amongst the timbers are the initials of Abbot Nichols Litlyngton (1362-1386) and King Richard II in whose reign it was completed and the tapestries range from the 16th – 19th centuries.

As for the name, no one is quite sure why, however we do know that King Henry IV died in this very room in 1413.

The King had been planning to travel to the Holy Lands, fulfilling a prophecy he would die there. But he instead fell ill whilst praying in the Abbey, possibly suffering a stroke.

Carried into this room, when he momentarily regained consciousness, he asked where he was. The answer? ‘Jerusalem’ and the King, satisfied he’d fulfilled the prophecy, could die in peace.

There’s a tantalising door in the cloister of the Abbey which you’ll hardly ever see open.

It leads to the library and during the tour when the door was opened it’s the smell that hits you first. Hundreds of centuries-old books, in all their discoloured and leather bound glory. 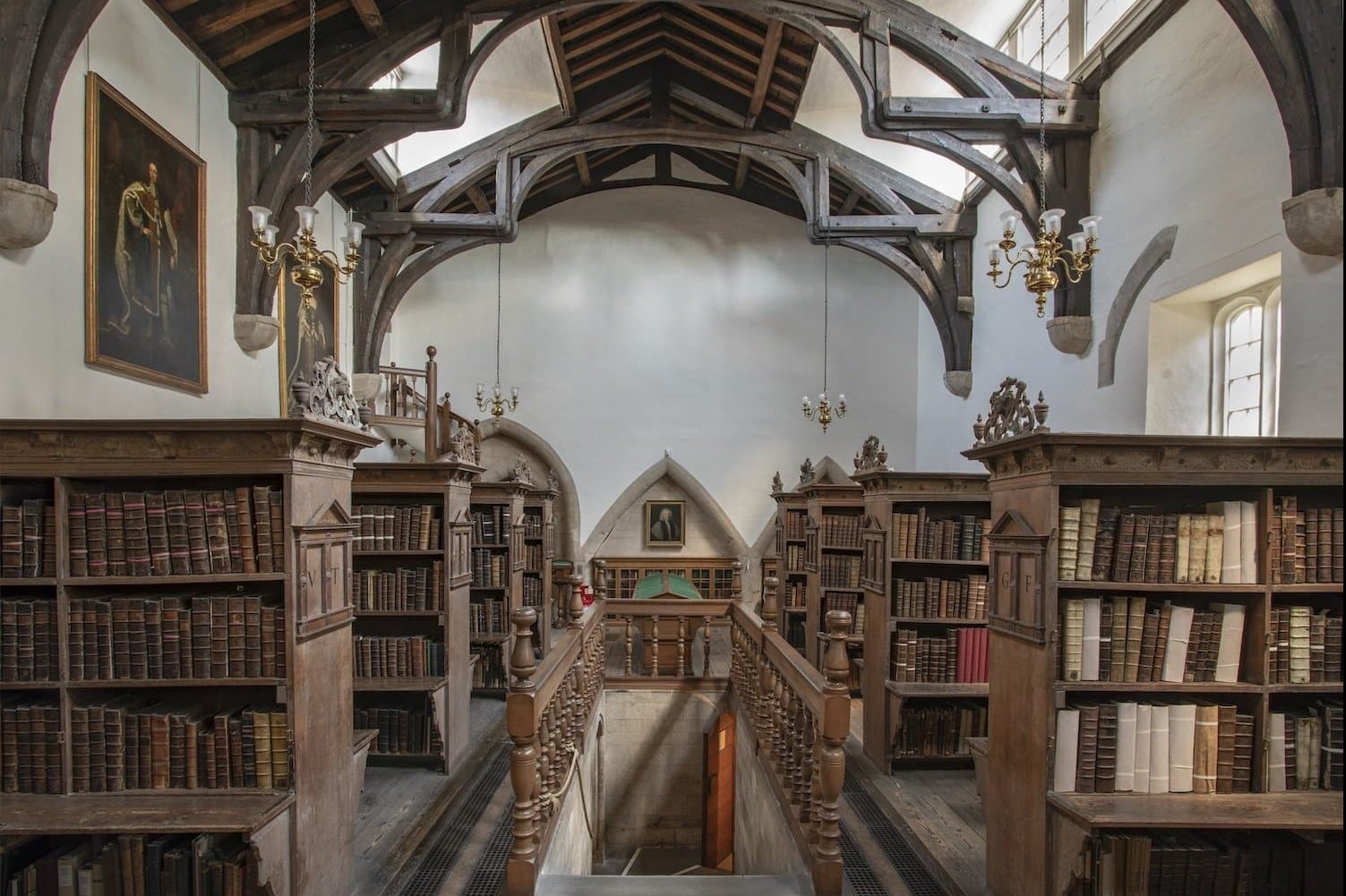 The room itself is far older though, previously used as a dormitory for the monks, with the spiral staircase giving access to the main Abbey for night-time prayers.

Today you can still see the steps on the south transept wall (bottom left in the image below).

Connected to the library is the Muniment Collection, an archive of the records of the Abbey dating back to the 10th century.

This is stored in the Triforium level inside the Abbey, visible from the floor and the Diamond Jubilee Galleries.

It’s hard to make out the epic wooden storage chests from below, however what is visible from the floor is the Medieval wall painting of a white hart, symbol of King Richard II.

As part of the tour you can also visit the Diamond Jubilee Galleries, a new area of the Abbey which opened in 2018.

Sadly you can’t take photographs from there (imagine dropping your phone over the edge!) but here’s the view of the beautiful wooden staircase that takes you there.

As well as a brilliant selection of historic objects related to the Abbey, it’s worth going up there if only to gaze down at the Abbey – soaking up the supposed ‘best view in Europe’ – from which Richard Dimbleby provided commentary for the Queen’s Coronation.

Go Behind the Scenes at Westminster Abbey

The Hidden Highlights tour can be booked here, and groups are small (just 10 maximum) so they’re selling out quick!

If you’ve never visited Westminster Abbey before, or it was years since you’ve been, now is the perfect time to organise a trip without the crowds! You can email me about arranging private tours here.