The Best London Clocks and the History Behind Them – Part 2

Having shared a post about the best London clocks back in February, I’ve stumbled across more beautiful (and historic) ones! Ready for round two of London’s best clocks?!

Faced with the dominating West Front of Westminster Abbey, the clock is probably not the first thing you’d notice. 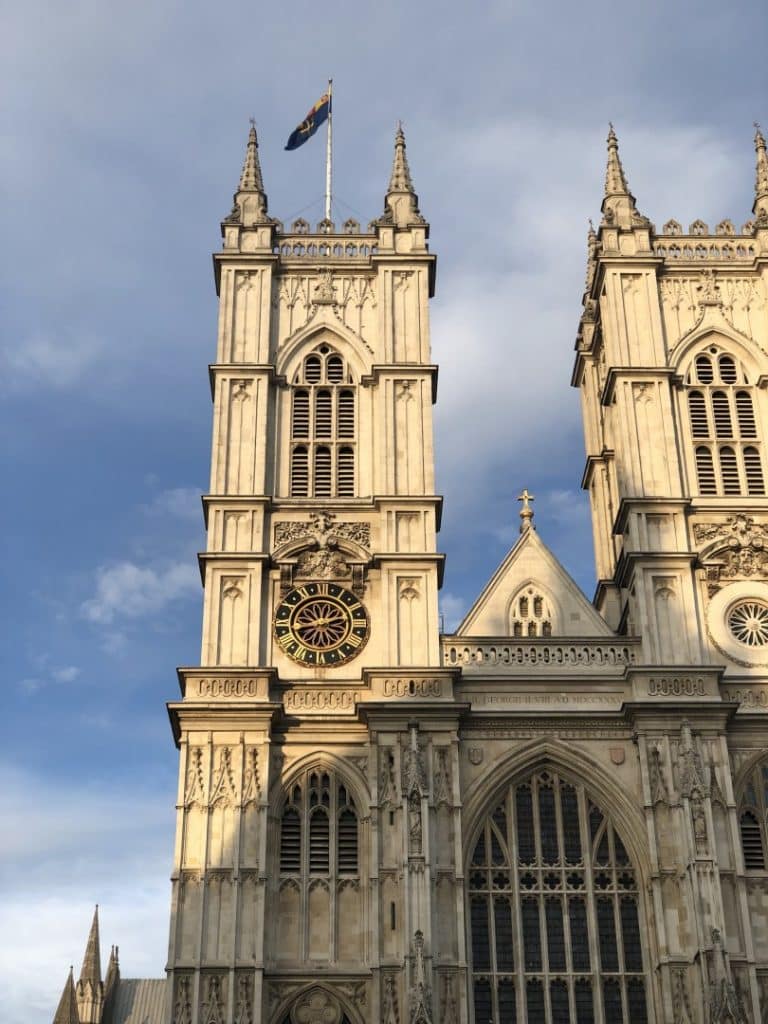 The West Towers were a late addition to the 13th century Abbey, its upper sections designed by Nicholas Hawksmoor and completed by John James in 1745 after Hawksmoor’s death.

The clock dates from 1738 and was designed by John Seddon. It’s unusual because it’s one-handed, only showing the an hour hand and therefore looks a bit more like a compass! 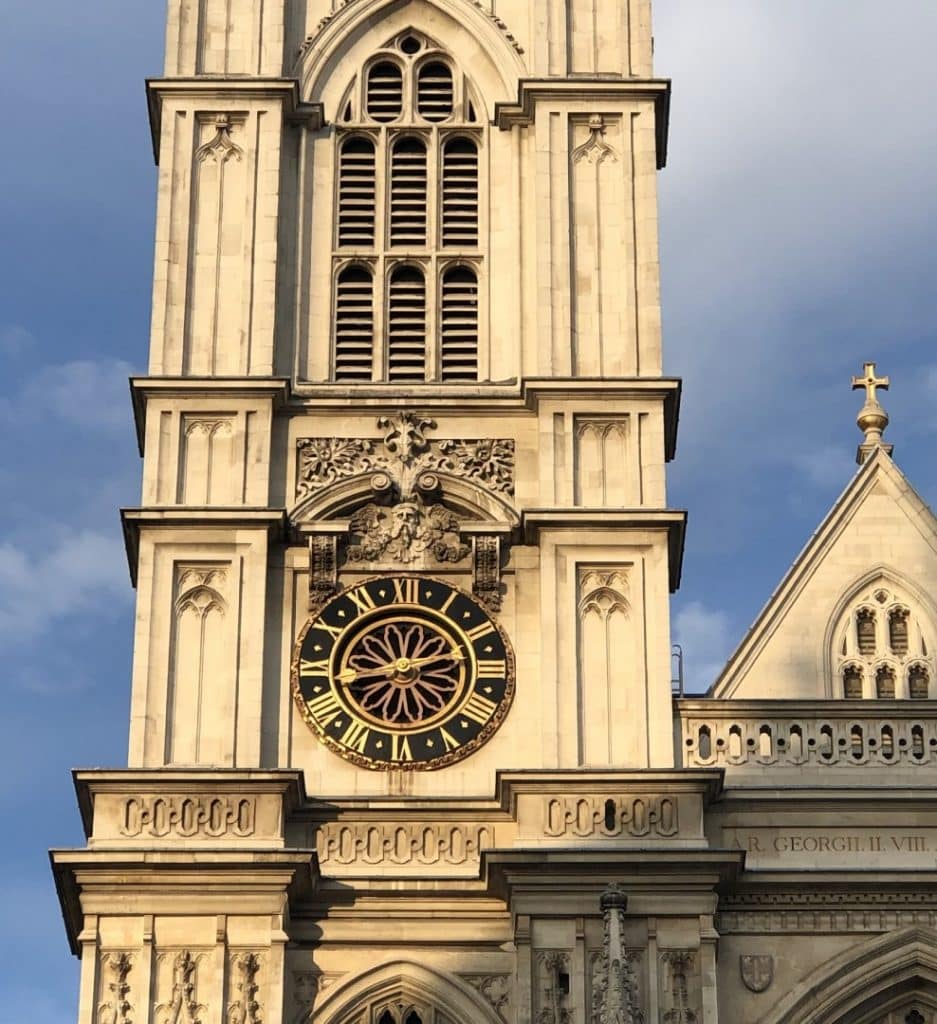 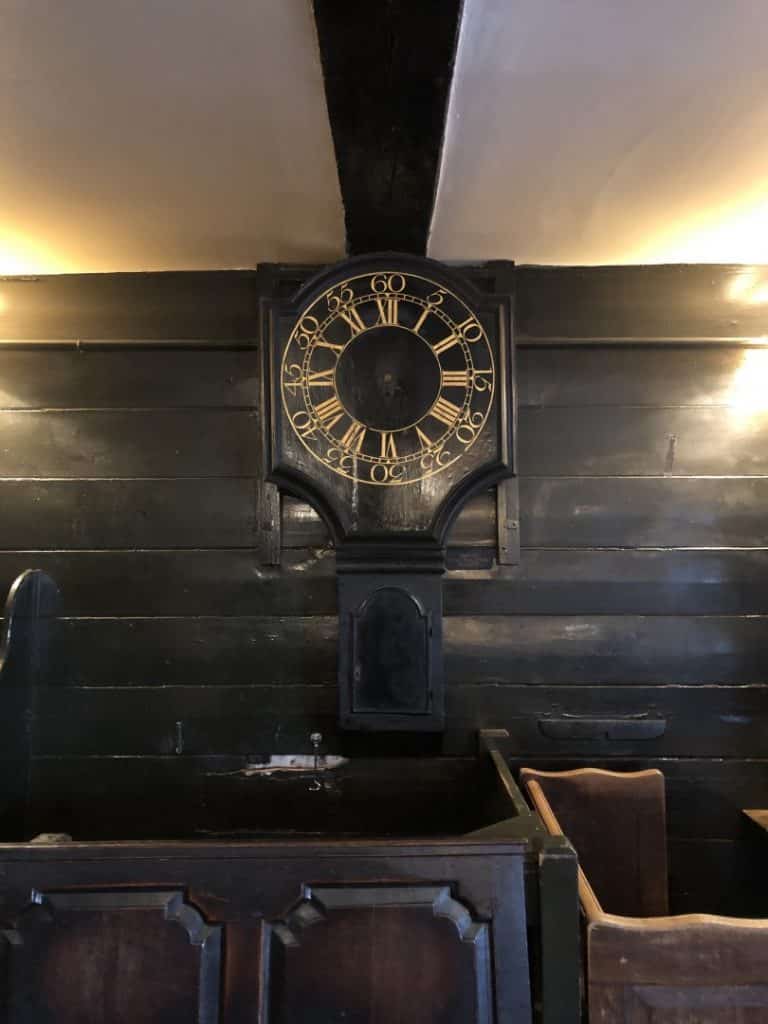 A nearby sign declares it an extremely rare ‘Parliament Clock’, one of the few surviving clocks that were hung up in response to the government’s tax on clocks in the 18th century.

The oft-repeated story is that this was installed in the pub so that people would pop in to see the time because they couldn’t afford their own. However this was just a myth that started after the tax was repealed. It was such an unpopular and ill-thought out tax that it only lasted a few months!

The second most famous clock in London to overlook the Thames… 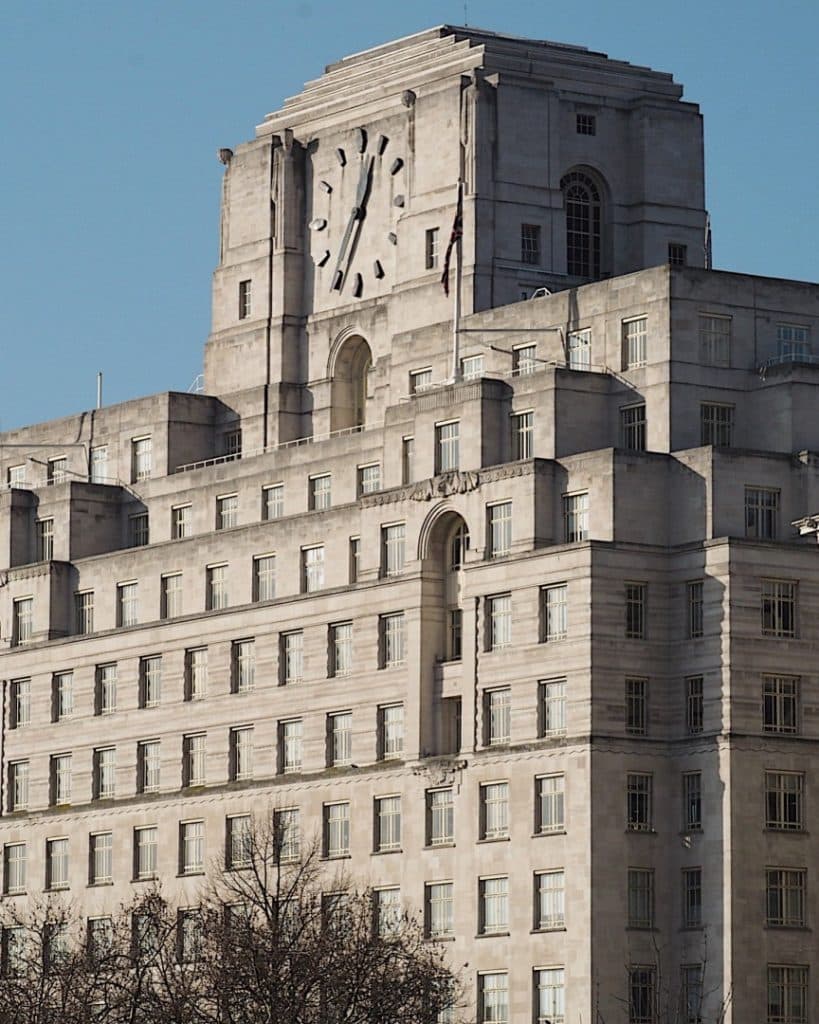 Today known as 80 Strand, the 1930s building was Shell Mex House, the former HQ of Shell Mex and BP. The clock face is the largest in the UK at 7.62 metres in diameter, hence the nickname Big Benzene!

Glance down St Mary-at-Hill Street off Eastcheap and you’ll see this lovely wonky clock. The church website doesn’t confirm its exact date but the church was rebuilt by Christopher Wren in the 17th century. 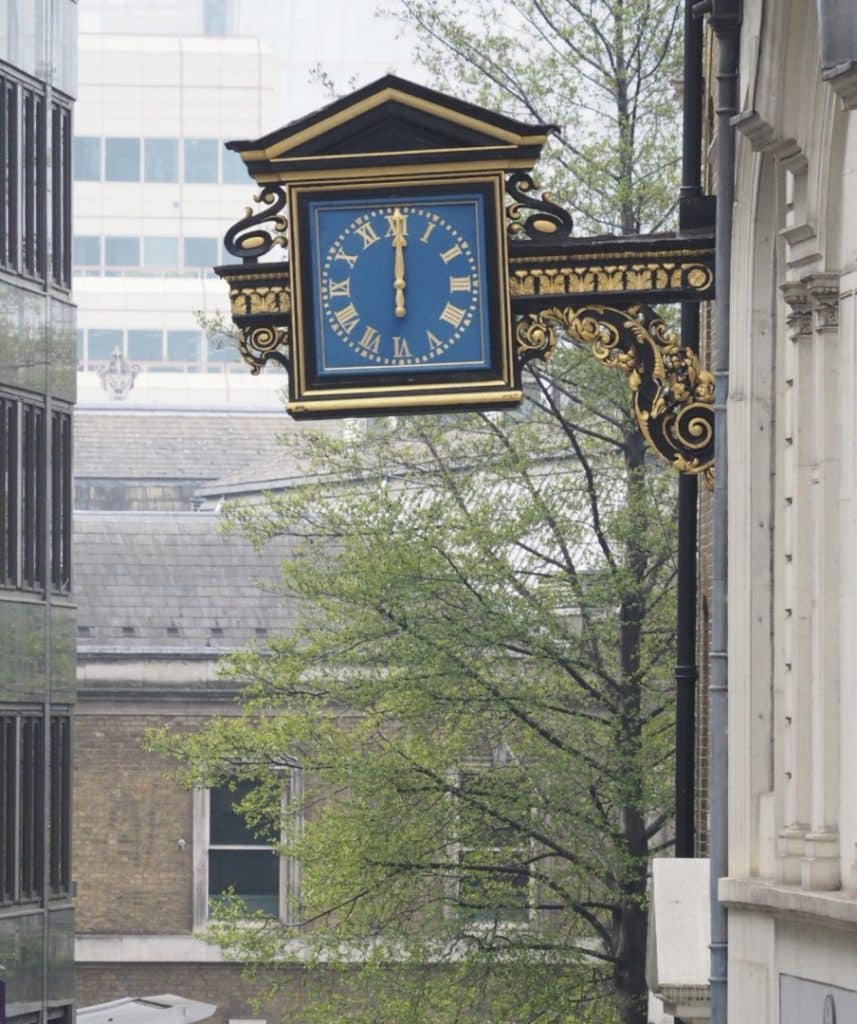 According to Know Your London, the clock is powered via mechanics in the tower on the other side of the building and connected through a long internal rod! 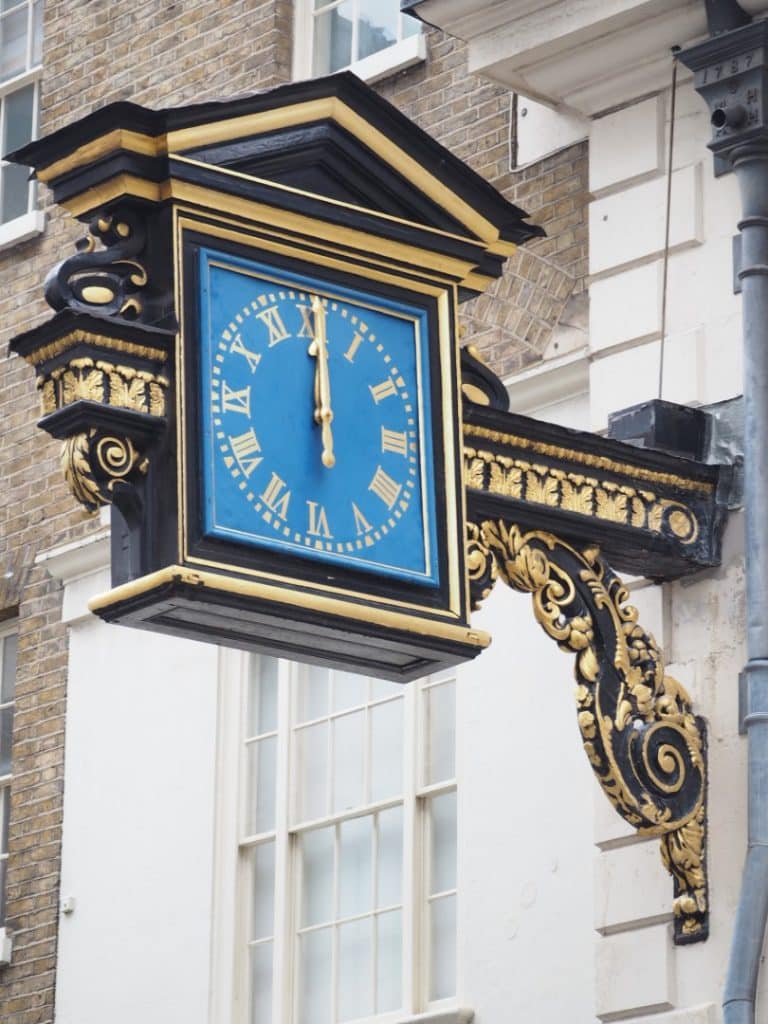 In Old Street, this clock looks back! 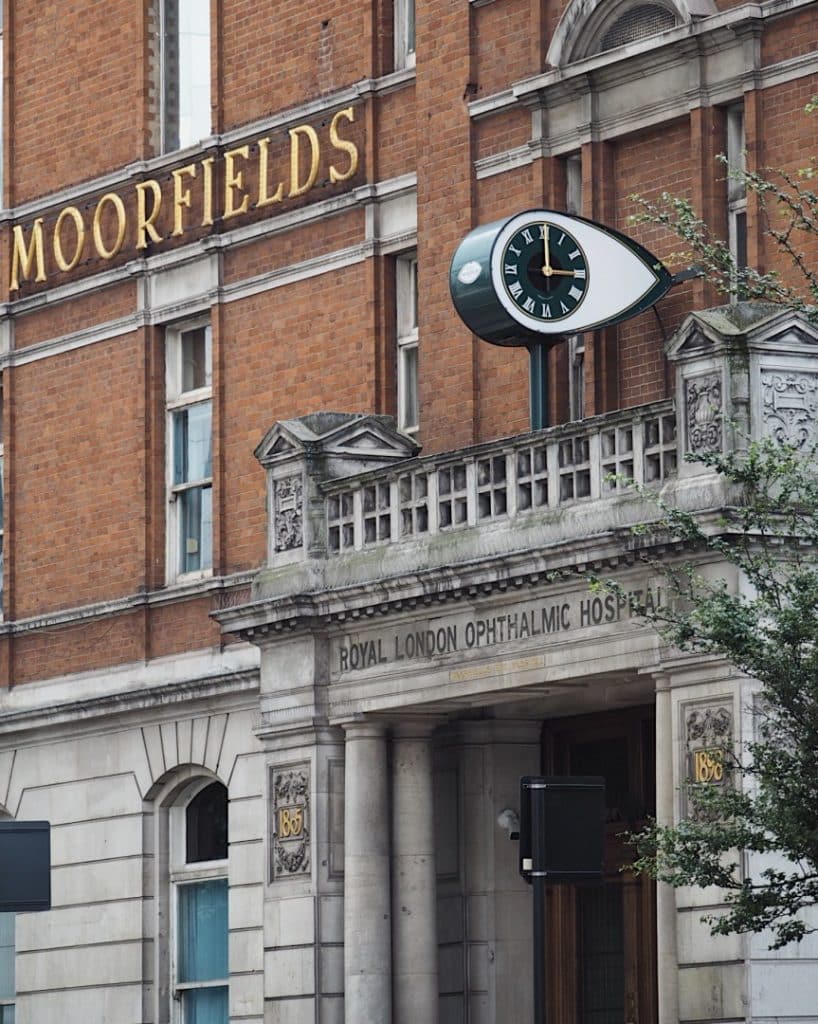 Bang on theme, this is Moorfields Eye Hospital, founded in 1805. In 1897 it moved to this location on City Road and today it’s part of the NHS and is the leading provider of eye health services in the UK.

The clock is a relative newbie, dating from 1999 in a commission to celebrate the Queen visiting the hospital.

Like the prow of a ship, No.1 Poultry’s pink and red mass looms over Bank Junction. 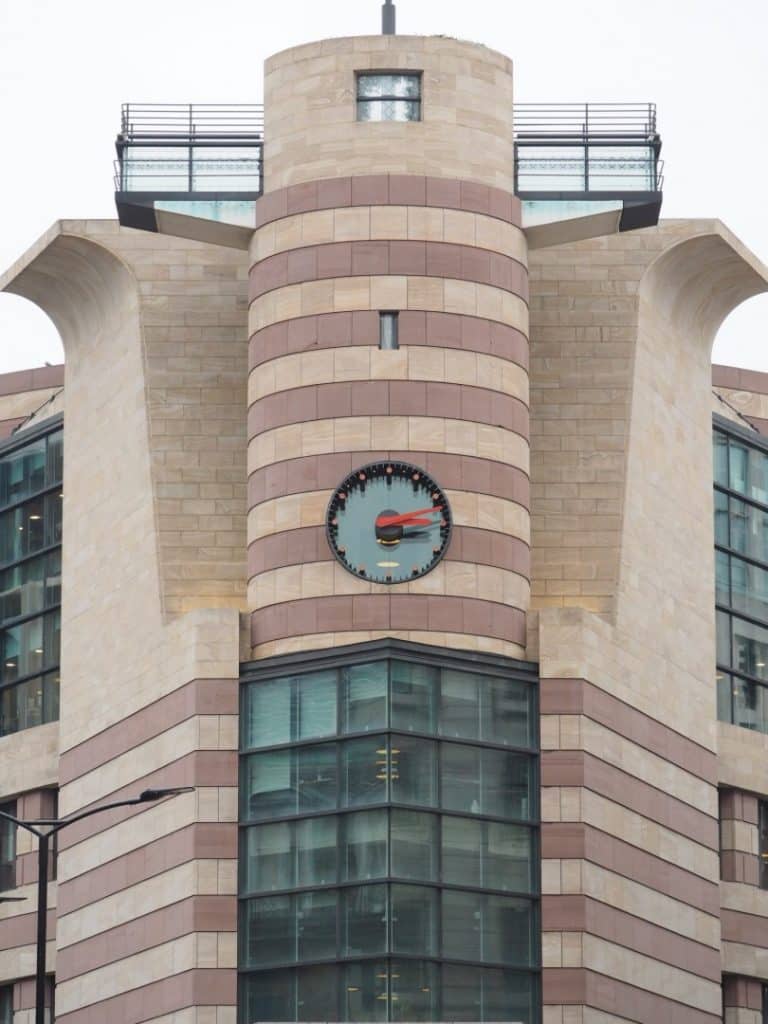 The building was pretty controversial when it was erected in 1998, designed by James Stirling. Not only did Time Out name it the 5th worst building in London in 2005, but Prince Charles described it as a ‘carbuncle’ and resembling a ‘1930s wireless’. 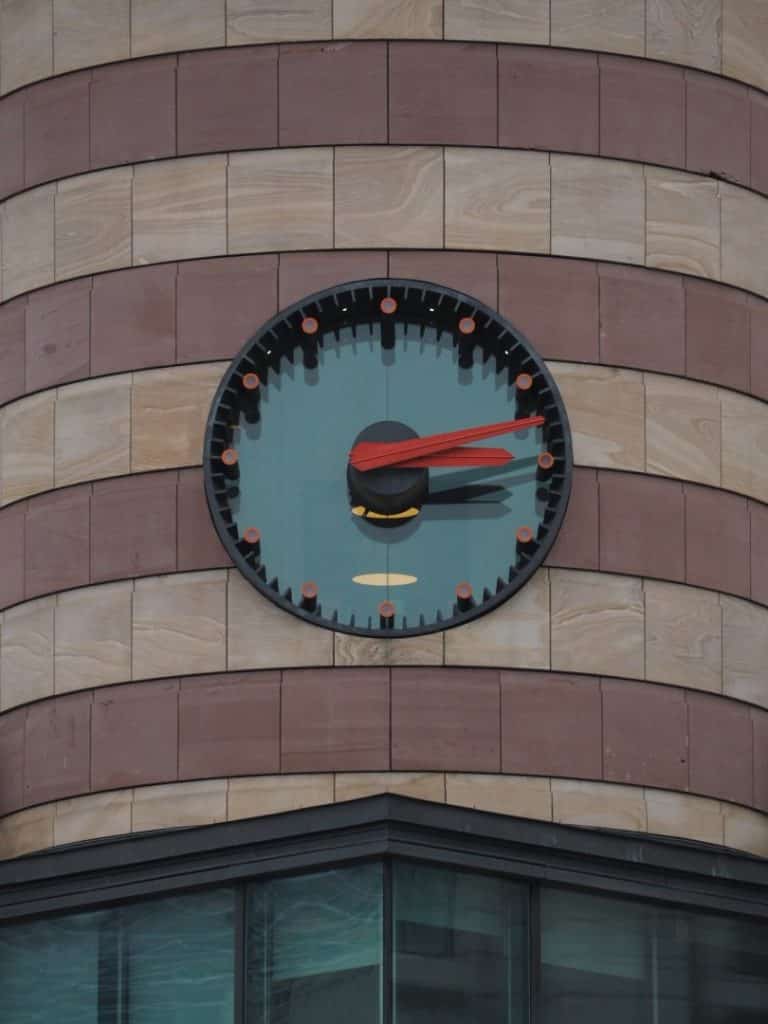 Today the building is owned by WeWork and from the inside (aptly named the clock room) it’s a delight! 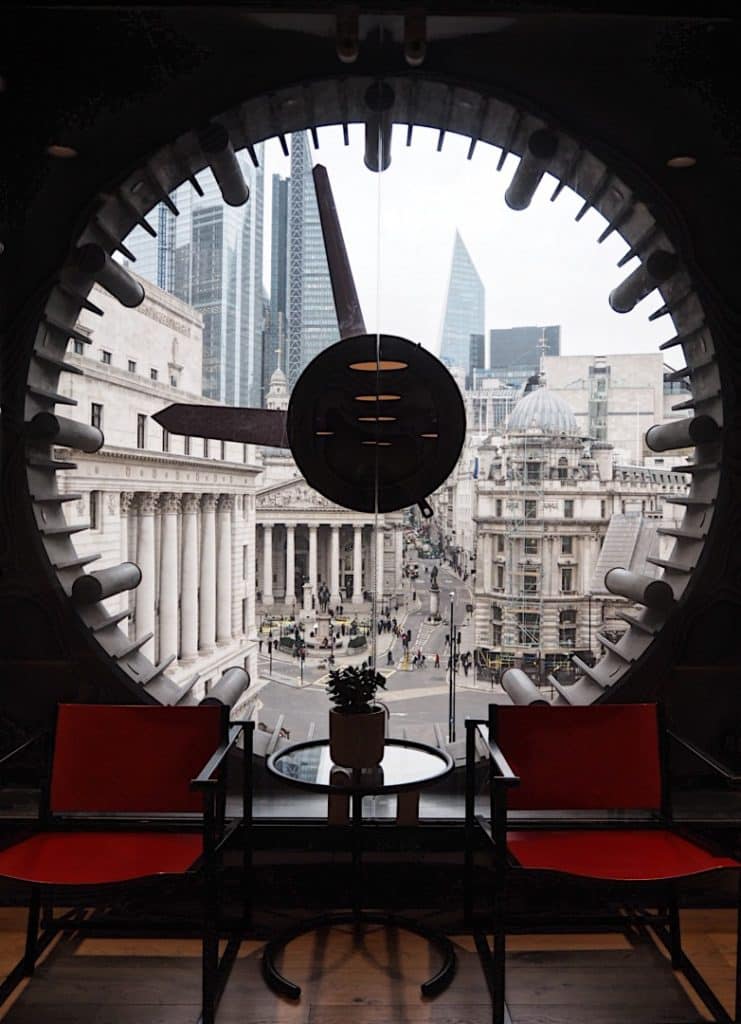 Sitting on Ludgate House at Ludgate Circus is this impressive timepiece. 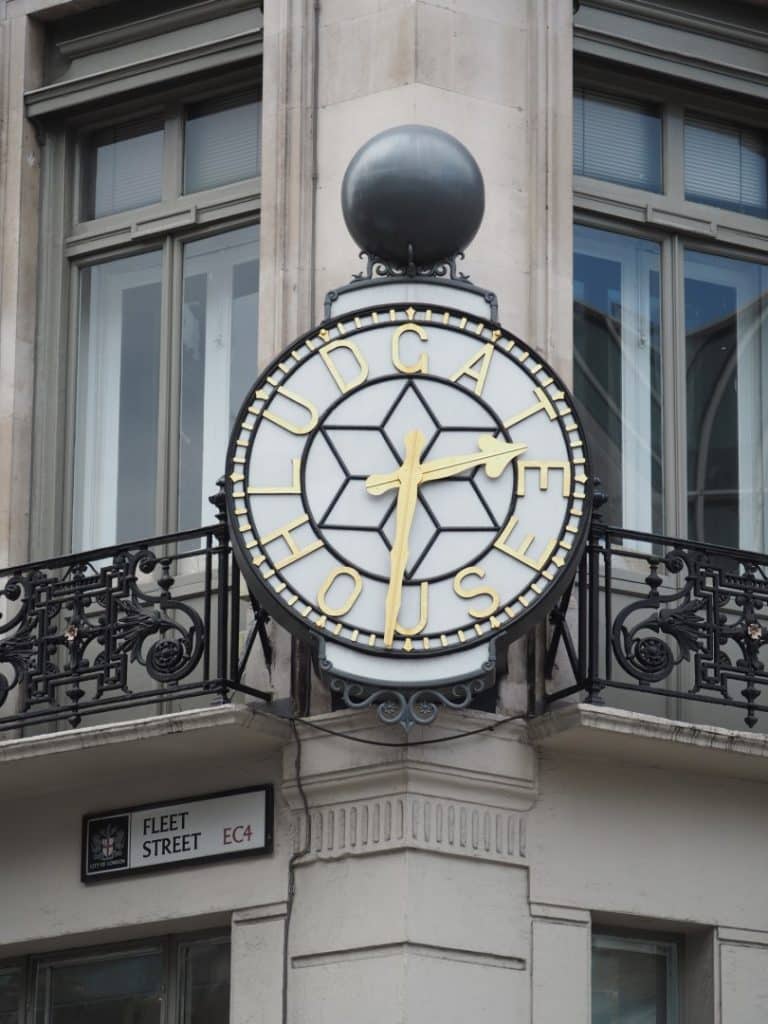 Built 1872-3, it was originally a Thomas Cook branch and you can see some fun details of the building’s travelling cherubs here.

This attractive florist in Notting Hill has a few different names; ‘Turquoise Island’ which sounds rather exotic and ‘Westbourne Grove Lavatories’, less so. 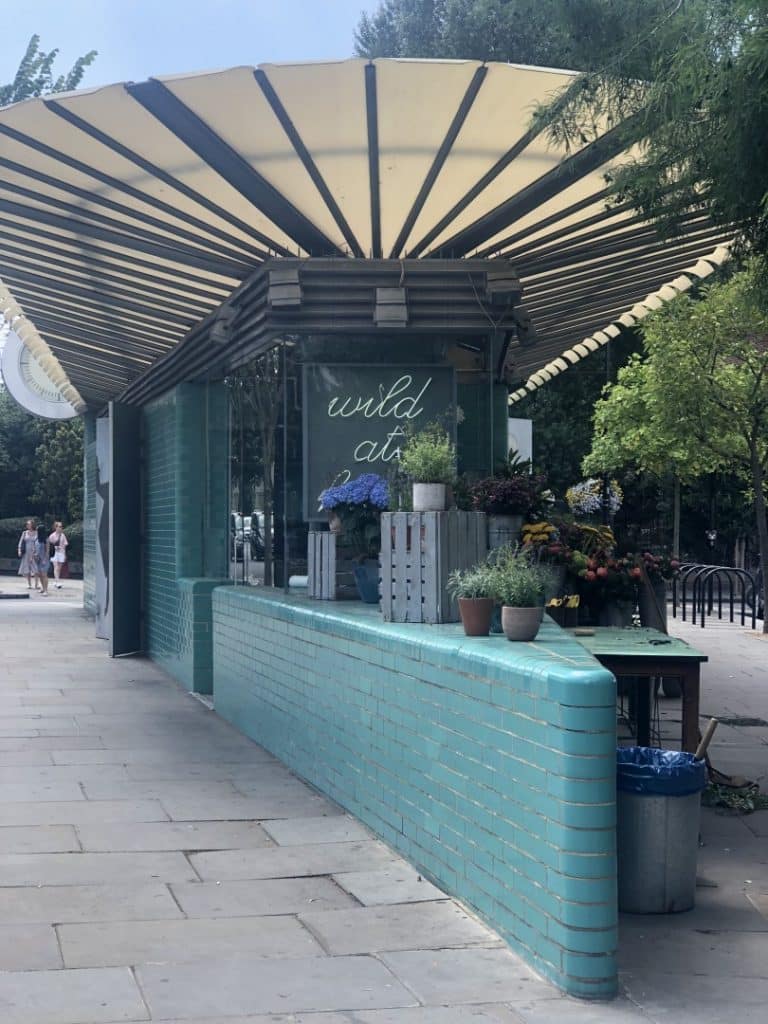 Commissioned by local residents, the it’s still a functional public toilet for male, female and disabled users. While the pointy end is a florist. It was completed in 1993 and designed by Piers Gough of CZWG Architects and the clock is rather lovely! 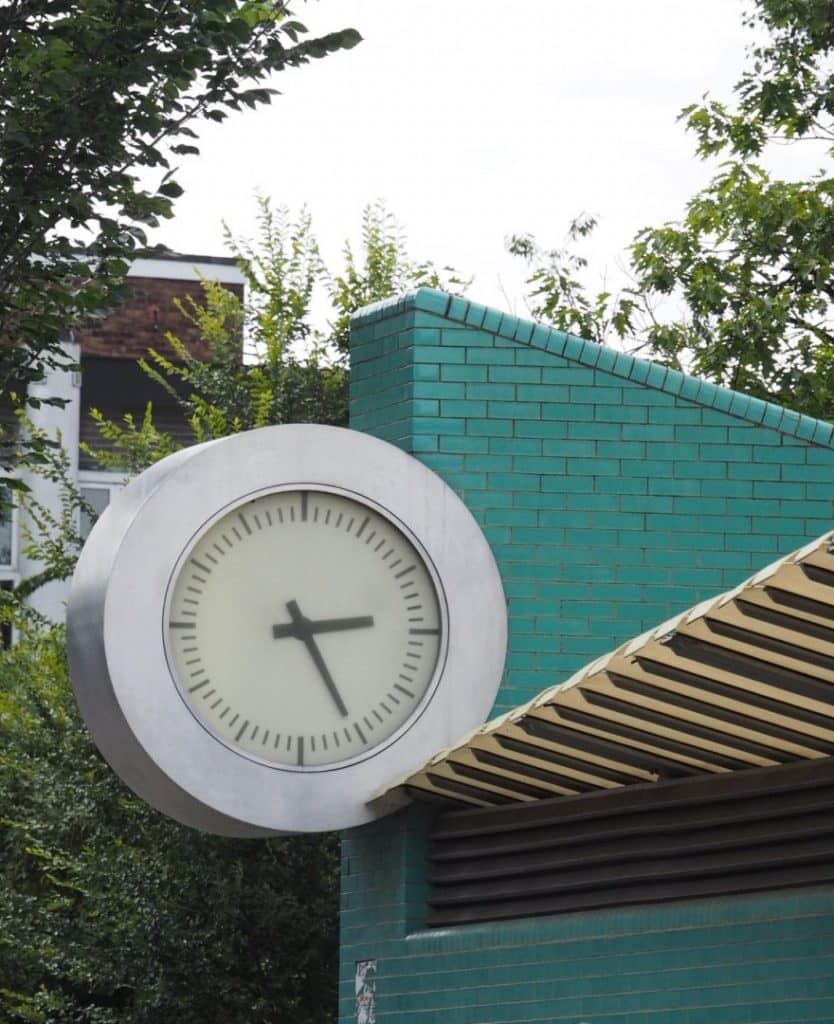 Of course the Elizabeth Tower got a mention in the first post about London’s clocks, but it’s worth taking a closer look now the refurbishment is taking shape.

When the first ‘new’ clock face emerged in March 2019 Londoners were in shock. the numerals and clock hands were blue! 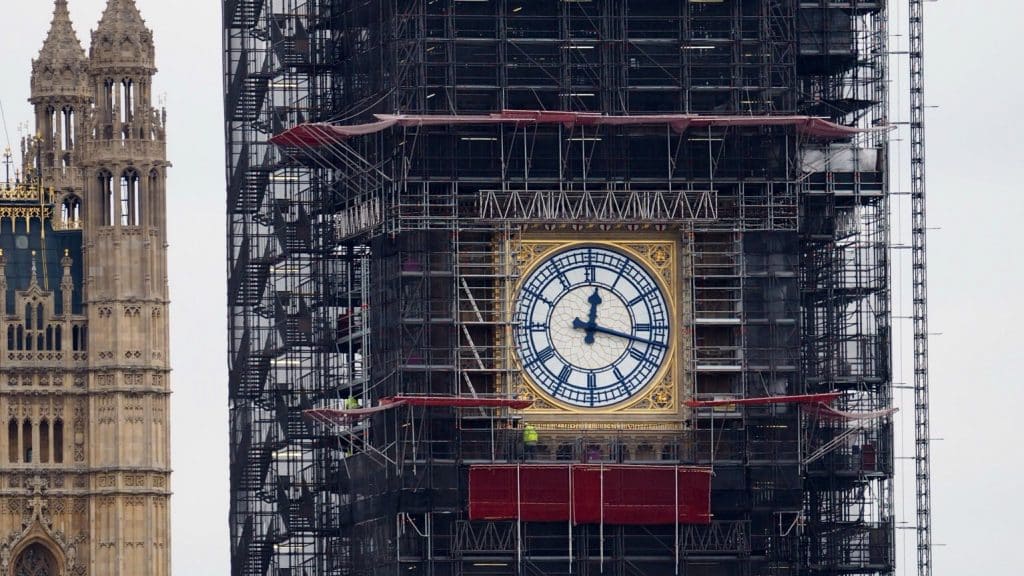 Naturally a barrage of articles and tweets complaining about the change to an icon. However this all died down when it emerge that this shade of blue was the original colour, it gathered soot and grime since it was unveiled the late 1800s then was repainted black in the 1930s. It’s now been restored as first intended!

Click on the map to find the locations of all the clocks listed above (as well as all the clocks in part one) If I’ve missed your favourite, let me know in the comments!