The Best London Clocks and the History Behind Them – Part 1

It’s not enough to just show the right time, we want our timepieces to be historic, beautiful and downright ostentatious! Have you spotted any of these? Here are the best London clocks to track down.

Sure, St Pancras’ clock tower is fabulous (check out my blog on the best London clock towers here) but the clock inside doesn’t get as much attention as it deserves. 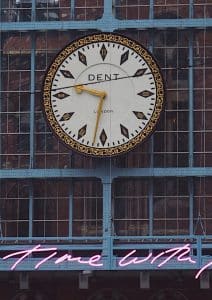 The magnificent station clock is a replica of the original one, sold to an America collector for £250,000 in the 1970s. But, when they were taking down the clock it *gasp* smashed. The thousands of pieces were then sold to a Mr Roland Hoggard, retired train driver for £25!

Yes, it’s not exactly central London, but this Astronomical clock is just one of the treasure of Hampton Court Palace that makes the journey worth it. 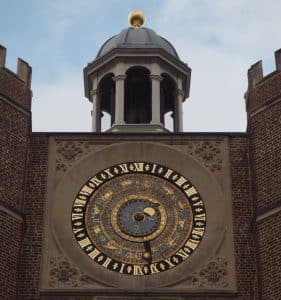 Constructed by Nicholas Oursian (clock-maker to English monarchs) in 1540, it’s an overwhelming amount of information in one clock. As well as two sets roman numerals, dates and months, it shows the zodiac symbols, lunar calendar and even the height of the tide at London Bridge. This last feature was important for King Henry VIII who regularly travelled via river from here to London. 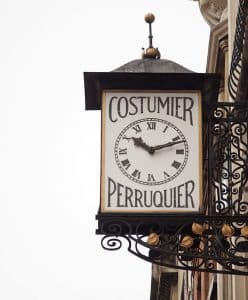 Willy was continuing the family business, moving the premises here after his father (also William) had established himself as wigmaker to the English court in 1833. Willy was clearly doing a good job and had fabulous West End contacts because brass plaques on either wall recall that the film actress Sarah Bernhardt laid the foundation stone while actor Sir Henry Irving laid the coping stone in 1905. 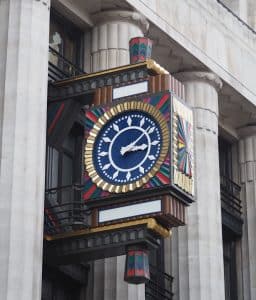 Now Peterborough House and occupied by Goldman Sachs, this is the former HQ of The Telegraph, one of the many newspapers which had their offices along the historic ‘street of ink’. The huge Art Deco mass was rebuilt in the 1920s and the clock reflects the same style, providing a nice colour pop for those that look up!

However, before the refurbishment this clock used to hang over Fleet Street. I can’t work out which I prefer!

It’s hard to pick a favourite amongst these dazzling timepieces, but if I had to choose, I think I’d go for this one. 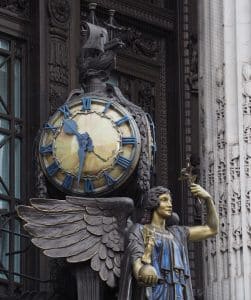 This 11ft bronze sculpture, marking the entrance to Selfridges, was designed by Gilbert Bayes and is known as the ‘Queen of Time’. It was unveiled in 1931 and immediately accepted as a landmark, with one writer exclaiming it as “London’s newest meeting point”.

In my experience though, because of the overhanging canopy on Oxford Street, I find many people don’t look up and appreciate what a marvellous scene is above their eyeline.

The Spirit of Soho, Broadwick Street

Part of the Spirit of Soho mural, unveiled in 1991, this clock is surrounded by Soho’s colourful characters. 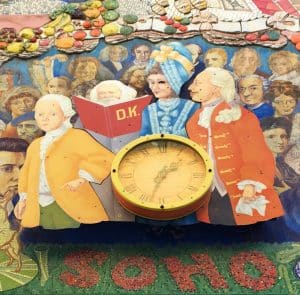 From left to right we have the young Mozart (who played at 20 Frith Street aged 8), Karl Marx (who lived on Dean Street 1851-1856), Teresea Cornleys, the opera singer and lover of her neighbour Casonova, who both lived in Soho in 1763.

As the clock strikes the hour the figures move (with a clunking and painful slowness…) Casonova blows kisses to Teresa who winks and Karl Marx take a furtive sip of Coca-Cola from behind his book; Das Kapital! 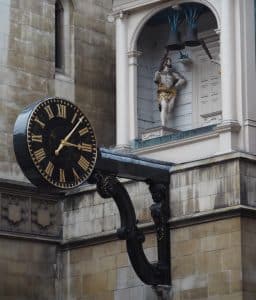 One of the oldest clock in London, this glorious overhanging clock was first unveiled in 1671, but has since undergone various restorations. It’s big claim to fame though is as the first public clock in London to have a minute hand!

To discover more Fleet Street secrets, join one of my walking tours here.

Founded in 1707 by William Fortnum, a footman under Queen Anne, William noticed the sheer amount of waste from the royal family household. Spotting a business opportunity, he got Hugh Mason on board and set up shop on Piccadilly. 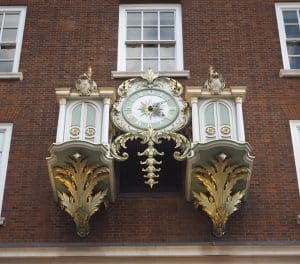 Each hour, the famous Fortnum and Mason clock gives a little show, Mr Fortnum and Mr Mason appear out of their separate doors and bow to each other. Look closely and you’ll see an ‘F’ and ‘M’ in the cartouches above their respective doors. 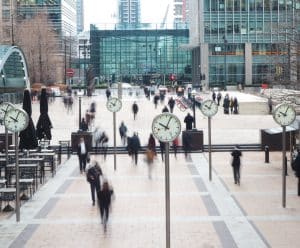 On a more contemporary theme, this public artwork can be found amidst busy commuters by Canary Wharf Jubilee Line Station. Six Public Clocks was installed in 1999 after German designer Konstantin Grcic submitted this winning design. 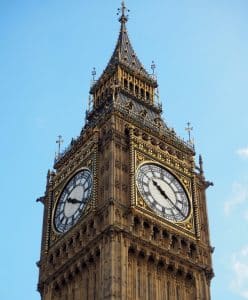 Of course we all know that the name Big Ben refers to the bell inside the clock tower, but let’s concentrate on the clock.

It was designed by Edmund Beckett Denison and Edward Dent. Weirdly, Beckett Denison was a lawyer rather than clockmaker. I wonder whether all other clockmakers are jealous of his one-time success? In terms of size, each clock face is 7 metres across and composed of around 312 sections of glass. The hour hands are 2.8 metres long and the minute hands are 4.3 metres (almost – to use the classic London measurement – the height of a double decker bus!)

Despite the size and weight of the hands, the clock is accurate to within one second and is altered by adding or subtracting an old one penny piece from a pile on the pendulum. The clock is maintained by Steve Jaggs who has possibly the best job title in London; ‘Keeper of Big Ben’.

One of the more unusual clocks on my list can be found inside a tube station, Piccadilly Circus to be precise. 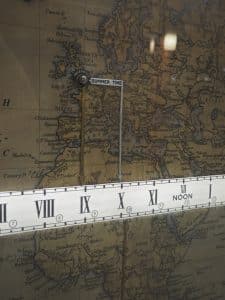 Not many commuters stop to appreciate this now, but when it was first on display in the 1920s there were huge queues to gawp at this newfangled novelty designed by Charles Holden and installed by John Mowlem and Co.

It takes a moment to adjust your brain to tell the time, but it works by the central strip moving across the globe at the same rate the Earth spins, meaning you can see the world’s local time all at once!

The clock on St James Garlickhythe is surmounted by the Church’s titular saint, but sadly it doesn’t quite date from 1682 as the inscription suggests. 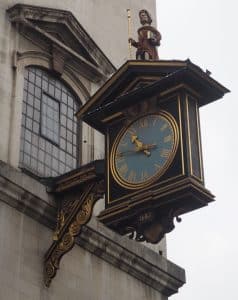 It was actually restored in 1988 after damaged badly during bombing on 11 January 1941. If you’re wondering about the peculiar name, ‘hythe’ is a Saxon word for a jetty and garlic was a very important medical ingredient in the Middle Ages, so probably traded on this street. The church was founded in 1375 and rebuilt after The Great Fire by Wren between 1676 – 1717. 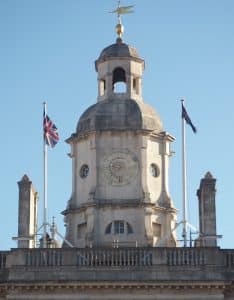 Built in the 1750s, the clock tower of the Household Calvary Museum hides a sinister secret. Do you see where there’s a black mark behind the 10 on the clock face? Supposedly this is a reference to that fateful time; 2pm, 30 January 1649 when Charles I was executed outside Banqueting House opposite.

Recently unveiled after the building was refurbished, look up by St Paul’s Cathedral to spot Frank Dobson and Philip Bentham’s astronomical clock. 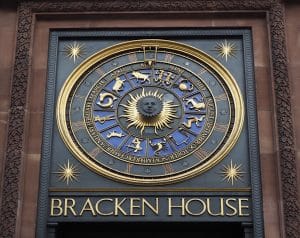 Made in 1959, take a close look at the face in the middle, It’s Winston Churchill! A personal friend of Brendan Bracken (chairmen of the Financial Times), this was the original home of the Financial Times before they moved to Southwark in the late 1980s. As of 2018 though they’ve since moved back! 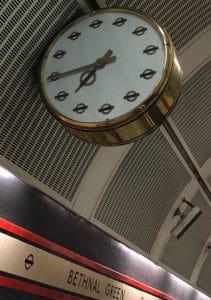 The clocks dates from the 1940s when the Central line opened here and were restored in 2009 so they gleam nicely! Note the miniature tube roundels instead of numbers. A tube geek’s dream!

Look up on Short’s Garden, Covent Garden and you’ll spot this clock. 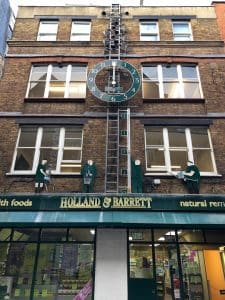 Created in June 1982 by Tim Hunkin and Andy Plant, a water tank on the roof steadily flows into the tube where numbers on the side show the minutes. At the hour the water empties and the figures start to move, creating magical scenes. Water cans pouring into troughs where flowers on floats start to rise as if growing! Even more surprising was that one fellow in green would turn his spout onto the crowd below, showering an unfortunate passersby.

Today it’s sadly no longer functional, but there is a surviving youtube video which gives you a good idea;

If you’re after a proper display when the minute hand hits 12, look no further than the Swiss Centre Clock. 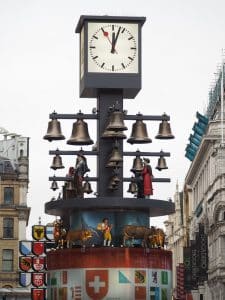 Installed in Leicester Square in 1968 to help promote the Swiss Centre (where today’s M&M World stands). It was demolished in 2008 along with the clock, but thankfully the clock was reinstalled in 2011.

This is one clock where it’s worth waiting for the hourly chimes. The carillon (an instrument with 27 bells) rings out while the chocolate-box styles Swiss figurines rotate around their podium.

Look up along Mile End Road and you’ll spot this flash of green and gold. 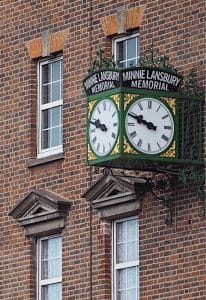 It remembers Minnie Lansbury, a campaigner for Women’s suffrage who served on Poplar Council. In 1921 she was one of 30 councillors sent to prison for refusing to raise the rates (passing on arbitrary higher taxes to their poor, local constituents). Tragically, she died aged only 32, six weeks after being released from Brixton prison. The clock was erected in the 1930s and was restored in 2016 by the Heritage of London Trust.

Look closely at this clock outside Liberty and you’ll see the stern message; “No minute gone comes ever back again take heed and see ye nothing do in vain” 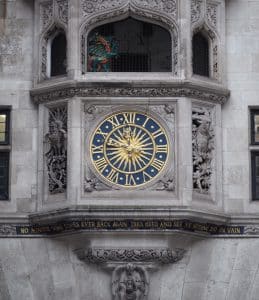 Restored by master craftsmen Gillett & Johnston back in December 2010, the original was finished with the faux-Tudor Liberty’s building in the 1920s. Every quarter of the hour St George emerges, on horseback to slay the dragon. In the four corners around the face are four winged heads representing the Four Winds and either side of the clock are carved panels; morning is symbolised by a crowning cock and rising sun; night by an owl and moon.

Click on the map to find the locations of all the clocks listed above. If I’ve missed your favourite, let me know in the comments!