in London, Look Up London
51 Comments

Now that most of us are spending more time at home, I thought it might be helpful to share some of my absolute favourites. Here is a (completely biased) list of the best London history books!

All the books mentioned are available to purchase on Amazon at the time of publishing. I’d usually encourage you to go to your local bookshop but with closures and the possibility of self-isolating I thought it might be easier to link direct. They are affiliate links so if you do want to buy the books, Amazon gives me a small percentage of the sale.

I’d love to hear your suggestions as well so please drop me a comment at the end of the blog with your favourites! 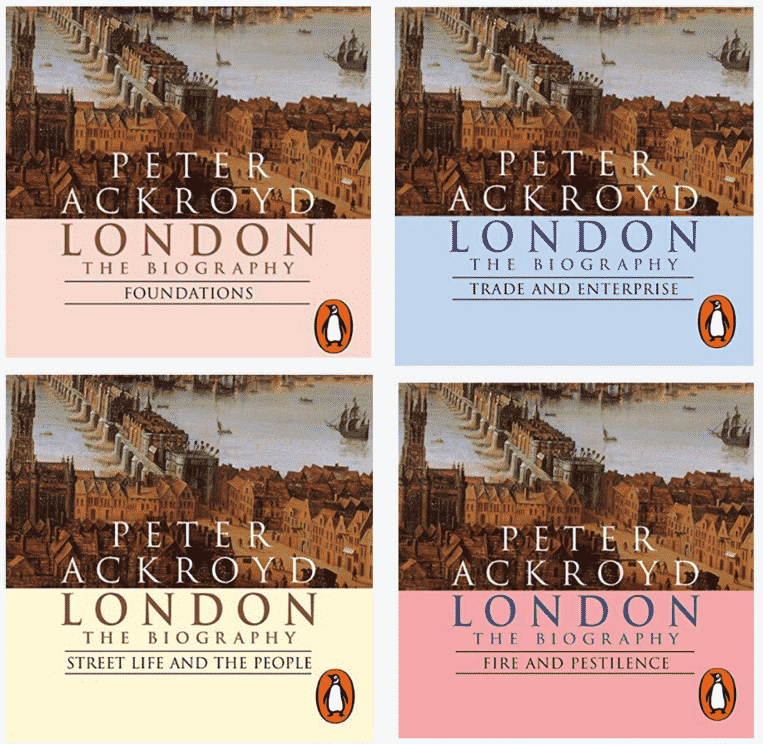 We may as well start with the definitive London history book. Yes it’s huge but it’s packed with fascinating tidbits and is a classic for a reason. It’s also nicely split into thematic sections. I listened on Audible which was narrated by Simon Callow, delightful! You can start a free trial on audible here. 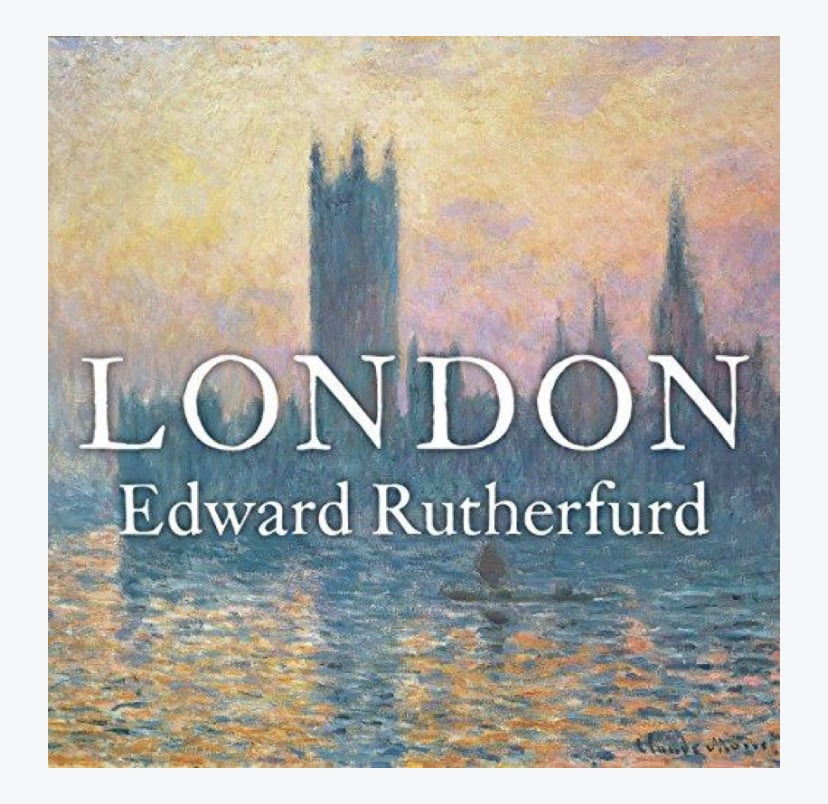 London is a novel, an incredible story of the whole of the city’s history told through a handful of fictional families. From before the Romans arrived you meet the main protagonists and then each part skips to their successors right up until The Second World War.

You live the city’s whole history through the eyes of the characters and have a visceral connection to epic events through London’s story. Instead of reading the book I listened to it on audible (it’s 49hrs 22mins long) and the human stories interwoven with nuggets of London’s past make it a unique experience. 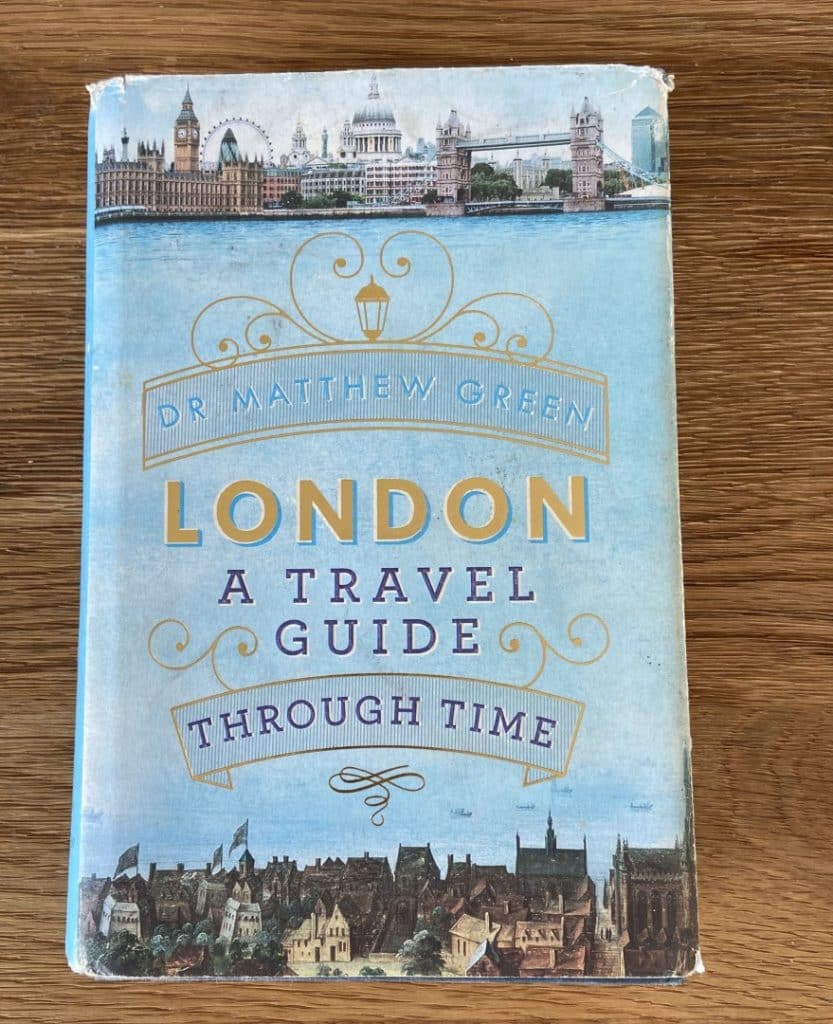 If you love your London history books packed with amazing anecdotes, this is the one for you. I have no idea where Dr Green gets these delicious tidbits but they truly bring London’s history alive.

The premise of the book is that the reader is a time traveller, able to touch an old object in London and be transported into different stages of London’s past. You hurtle into precise moments in time, from the stinking streets of the City in 1390 to the bomb-ravage party scene of the Kings Road in 1957. The descriptions are vivid and the tone is like a chatty and deeply knowledgable tour guide.

4. Everything You Know About London Is Wrong 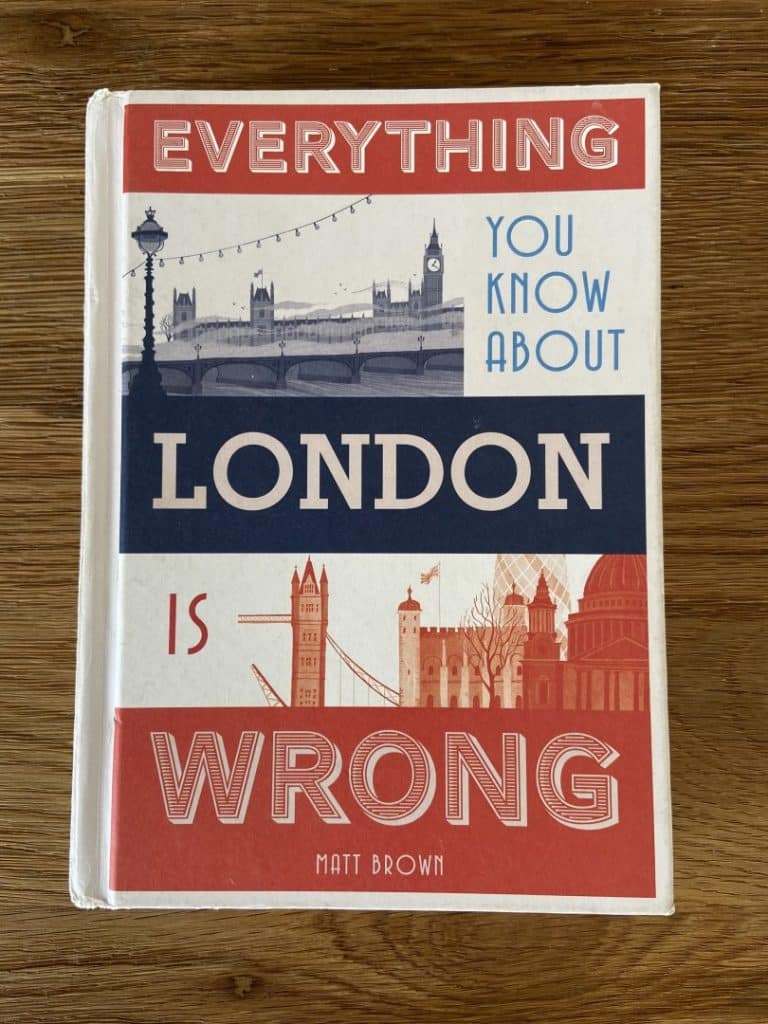 Everything You Know About London Is Wrong by Matt Brown, published 2016

What self-respecting London aficionado could resist this click-baity title? Not I!

The Author, Matt Brown, is the editor of The Londonist and is one of the most diligent researchers of London’s quirky history that I know. This book is pretty self-explanatory, working its myth-busting way through plenty of classic London tales; No. There are no old Newgate prison cells under Newgate Tavern; No. Jimi Hendrix didn’t release the first parakeets in London; No. Boudicca is not buried under platform 10 at King’s Cross.

But far from being preachy, the answers are often more fascinating than the myths and Matt charms and rejoices in sharing the truth and debating London’s history nitpickers.

Another fiction title to add to the list, the Rivers of London series is a joy and perfect for binge-reading. They centre around PC Grant, the likeable Metropolitan Police Officer who is a self-identifying London history geek.

The twist is that PC Grant stumbles upon London’s magical underbelly and is plunged into a world where subterranean ‘lost’ Rivers are Goddesses, an army of trolls live in the Crossrail tunnels and he suddenly has to train to be a wizard! Full of London in-jokes and references, Aaronovitch also doesn’t pull an punches when it comes to descriptions of our Police force and any aspects of London he doesn’t like. I read it grinning from ear to ear. 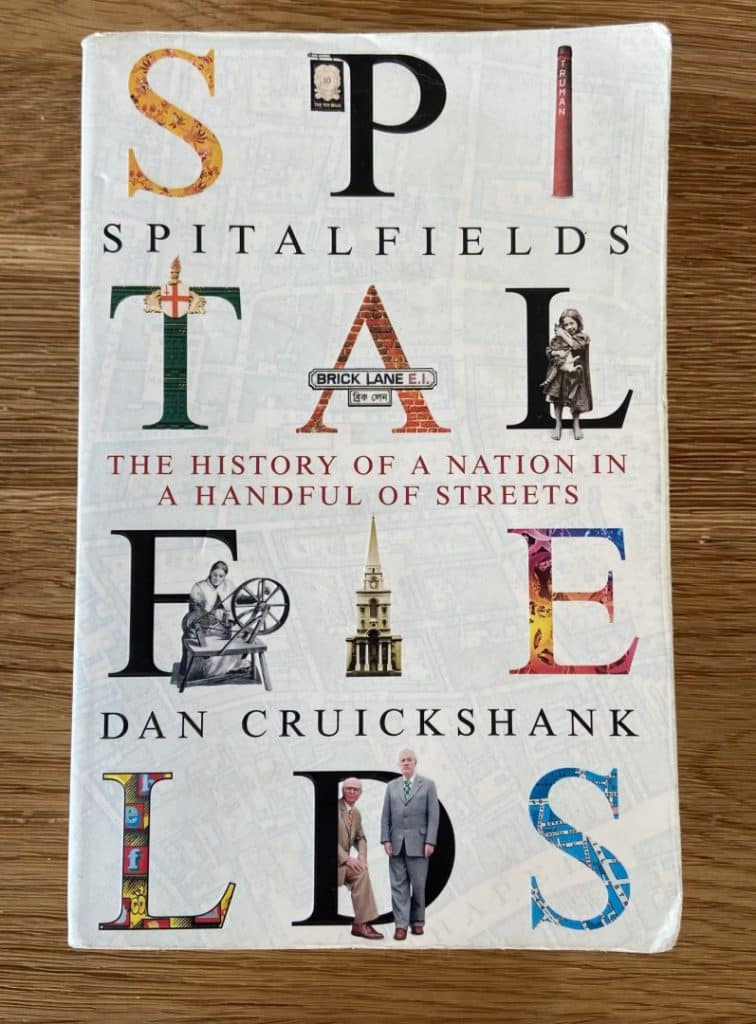 You may need to clear some space on your bookshelf for Spitalfields, but it’s worth it. Cruickshank’s chunky history of this small area of London is exquisitely detailed and well-researched.

From its very beginnings until pretty much the present day, we become intimately acquainted with the many colourful characters, nationalities and professions that have left their traces on this patch of East London. It is intense and thorough. (I have to admit I skipped over some of the passages that concentrated on architectural details and street plans) but it’s best when focussed on the human stories of Spitalfields, of which there are plenty. 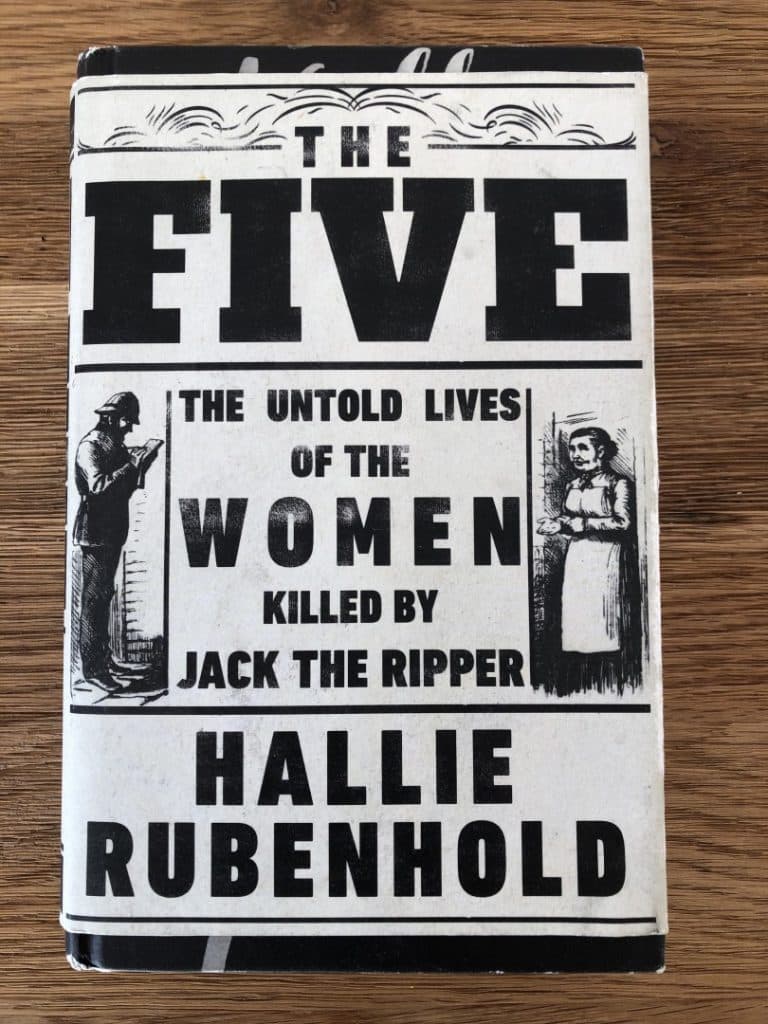 The Five by Hallie Rubenhold, published 2019

For a lot of visitors to London, a “Jack the Ripper” tour is one of the highlights of their trip. For a lot of Londoners too, it’s the first walking tour that springs to mind. The story is seemingly well known, a Victorian cloak-clad man stalked the streets hunting down the East End’s sex workers.

That was until Hallie published her thoroughly researched, bombshell of a book that for the first time gave the victims the focus they deserve.

The Five is deeply emotional as you walk the lives of the five ‘canonical’ victims. You know how each story ends and so you silently beg the women to avoid Whitechapel as the state, their relationships and often their own actions, fail them again and again. It’s also a rallying call to change our perceptions on these women and above all to remember them; Polly, Annie, Catherine, Elizabeth and Mary Jane.

Mudlarking: Lost and Found on the River Thames by Lara Maiklem, published 2019

Mudlarking, if you weren’t aware, is when you search the Thames foreshore in the hope of finding a piece of London’s history. They say one man’s rubbish is another’s treasure, well this book proves there is depth and beautiful stories behind every tiny thing that has fallen into the river.

Mudlarking reads more like a diary, which is a good thing. We hear a personal account of her times down on the foreshore and gain a better appreciate of  the art of mudlarking, from the concentration of looking to the patience of restoring. Apart from her finds, she also shares the history of the River and its relevant areas so there’s plenty of fodder for history lovers.

The one thing readers might miss with the hardback edition is the lack of images of the finds. Happily though, Lara has an accompanying Instagram account with all the images in chapter order for you to peruse! If you prefer the paperback, that does have the images printed.

Again, packed with anecdotes, Inglis gives a lively view of 18th Century London. Each chapter focuses on a geographical area and there are loads of fun stories to enjoy. My copy is covered in notes! 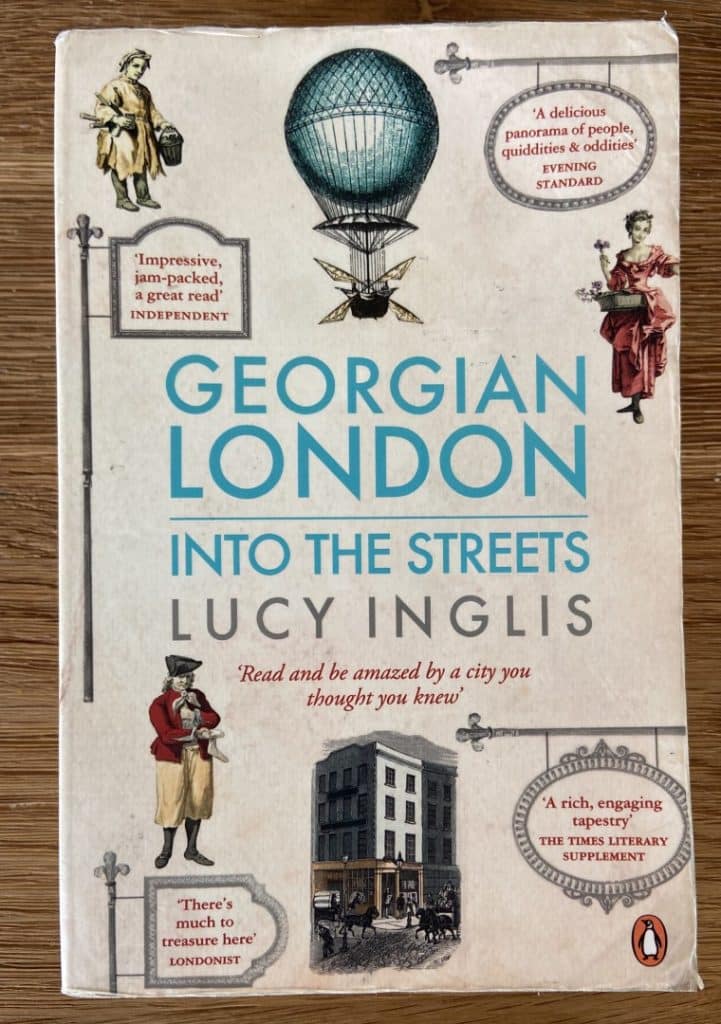 Georgian London: Into the Streets by Lucy Inglis, published 2013

In a similar vein to Georgian London, Liza Picard has a fabulous selection of books and they are also full of juicy stories and give a real sense of what life was like. I’ve read her books on Victorian and Restoration London and can highly recommend them.

So what are you favourites? Are there any others I need to read and have you also read some of these? Let me know in the comments.