In the last few years a stroll along Brick Lane has become one of the must-tick-off activities for London’s visitors, rising from the realms of ‘local knowledge’ and ‘off the beaten track’ to a standard tourist recommendation. So where is the Best Shoreditch street art? 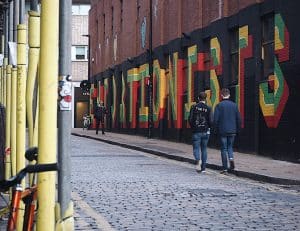 This reads EXTORTIONIST by Ben Eine, master of typography.

Looking closer, you can’t deny the artistic, creative talent of the people making this art. And so here are some of my favourites examples of the best Shoreditch street art on offer and a little about the artists behind them.

It goes without saying that all street art is transient and often will be gone the next time you visit. However, these artists and their distinctive styles can be spotted all over Shoreditch and the rest of London, so keep your eyes peeled!

Better known as ‘Broccoli Man’, Adrian proves that all you really need is a niche.

He started sticking real broccoli on walls in response to the Spanish crop failures and resulting price hikes across England. Today you can spot his colourful vegetables along Brick Lane. 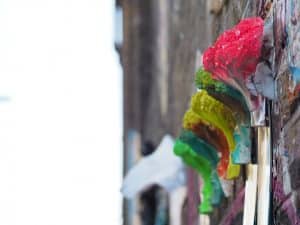 You can spot this frenetic face along Brick Lane. It’s by Alex Arnell who sometimes tags as ‘Sell Out’. He says the name comes from a literal meaning for his outside work, but it’s also a common insult thrown around the Street Art world for people who have made money from their Street Art platform.

In terms of style, he says he is very influenced by his work with primary school children, he has worked part time at a school for a few years according to his site.

Probably the most famous Street Artists in the world, we kinda have to start with Banksy and you’ll be glad to know you can spot his (protected) artwork around the back of Cargo nightclub on Rivington Street.

Did you know there’s a Banksy in Poplar? Read my post about it here.

King of typography, if you spot some attractive bubble writing around London it’s usually Ben Eine’s.

Today he’s one of the most successful street artists in the world. Bizarrely, he partly has David Cameron to thank. He gave a print of Eine’s work to President Obama in 2010, shooting him into the spotlight and then the paid collaborations with luxury brands rolled in.

Aka ‘Mushroom Man’ (I don’t think that’s an official name and is possibly something I made up) you can see Nagel’s work sprouting along rooftops all over London. 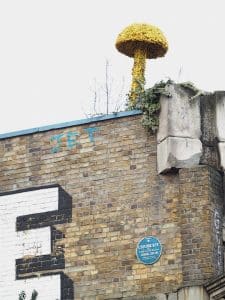 This one is by Village Underground on Great Eastern Street, 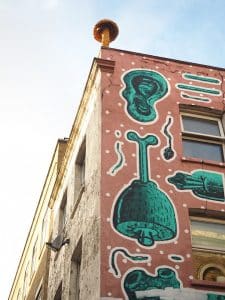 and this one can be found on the corner of Redchurch Street and Turville Street.

A favourite of mine that often goes unnoticed is Clet’s improved road signs. 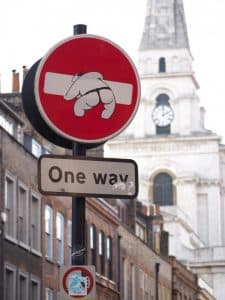 This sumo wrestler is probably my all-time fave, but do keep your eyes peeled for his playful additions to the highway code. 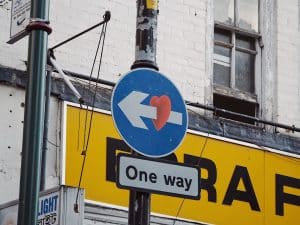 A successful fine artists who sells works in some of the London’s best galleries, Grimshaw still likes showcasing his bold, almost photojournalist, portraits on London’s streets. 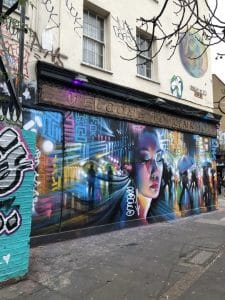 You can usually find one of his pieces (updated every couple of weeks) on the corner of Brick Lane and Pedley Street. Sometimes you’ll even get lucky and see him in action, creating a piece right in front of you!

On a portrait theme we then have Neequaye Dreph. At the moment he’s been working on a ‘Your Are Enough’ series, painting real-life women from the local community who are empowering others. 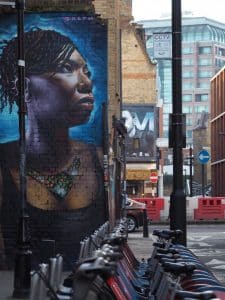 This is Tracy Blackstock, she works for a preventative programme for young people exposed to harmful sexual behaviour, either abuse or overtly sexual material.

As the name suggests, this artist is all about animals. For the moment it’s specifically elephants, but they hope that with their campaign ‘We Are People’, us humans start to recognise elephants as equals. 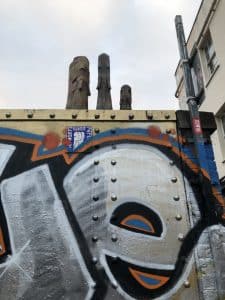 Elephantman says “our fellow creatures are not mere things but are ‘people’ and should be seen as such in legal terms.” You can find his elephants above your eyeline, stuck on any opportune pillar or post.

With a more playful angle is the Parisian artist Gregos. He casts his own face then sticks it to walls, usually colourful there’s over 1,000 of his works worldwide and you can spot many of them along Brick Lane and its side streets. 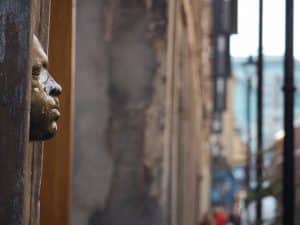 This one is on Fashion Street.

As well as small casts, mosaics often appear in Street Art because similarly, once you’ve done the hard graft at home, you can securely stick them up in one piece fairly sharpish. This avoids an awkward run-in with either the police or local council officers.

The most prolific mosaic-er is; 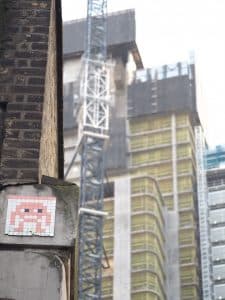 For Invader’s work each mosaic square represents a pixel from an 8-bit video game and his places his pre-made artworks on urban walls using cement or “extremely effective and innovative glues.” 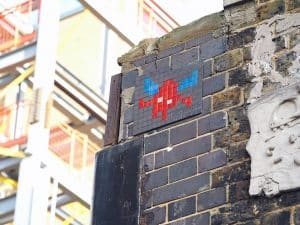 What makes these different than simple mosaic artworks though is technology. Invader describes himself as a “hacker of public space” and of “spreading a virus of mosaics.” Indeed, each invader is part of a bigger picture, supposedly if you connect the dots of each individual invader in a particular location, the lines draw out a massive one! You can download a “FlashInvaders” app where you can take pictures of Street Art and the app tells you if they’re genuine, earning you points in the game. 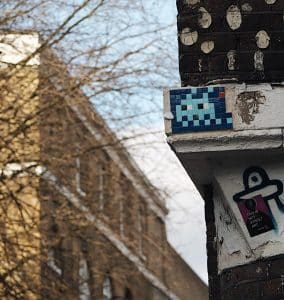 The Belgian Street Artist has been creating his trademark binmen characters since 2011. These tiny, playful men are often doing surprising things – think air guitar or break dancing – and their location if often an integral in the composition. You can find this one on Brick Lane, where they peer curiously around the corner of Buxton Street. 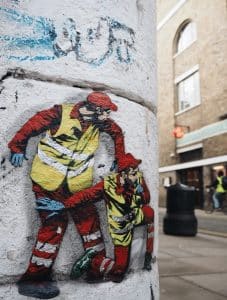 Sadly – as of October 2018 – this piece has been a bit obscured by recent paste-ups but you can still hunt for his other pieces around Brick Lane.

Back to painting, Jimmy C (aka James Cochrane) has a clear style which makes him easy to look out for. 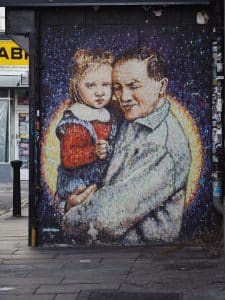 I can never quite believe this effect is achieved with spray paint. Also, every time I look at his work I can’t help but think of Pointilism, the late 19th Century style popular with Post-Impressionists. They too used dots of pure colour which – from a distance – your eyes fuse into one shape.

Cochran says himself that he was influenced by Aboriginal Art from his native Australia, the original folk technique to use dots of pure colour.

Even if you think you haven’t heard of Jimmy C you probably will have seen this piece.

Painted in 2013 this portrait of David Bowie reached worldwide fame when pictures of it were circulated internationally following the news of Bowie’s death in January 2016.

It became a public space for people to grieve and was so popular that it’s now – thanks to Lambeth council – London’s only piece of listed Street Art. 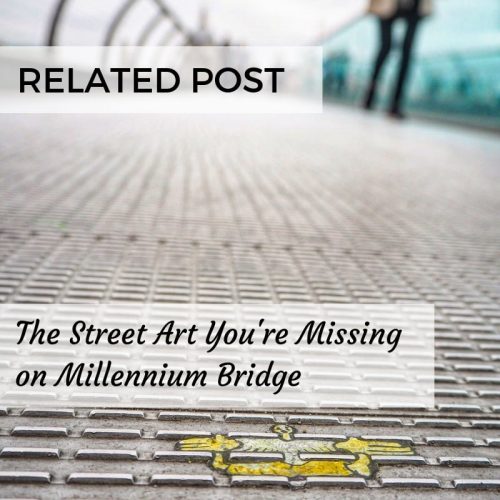 By far in a way the most secretive Street Artist you can find around London is Jonesy. Once you’ve spotted these tiny, figures you’ll forever keep an eye out for more!

Jonesy’s sculptures are made from cast bronze, so mixing a very traditional sculpture technique with bizarre animal forms in surprising places. 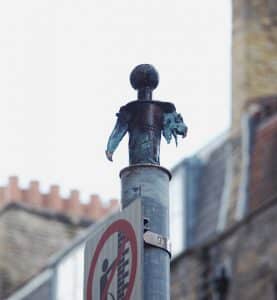 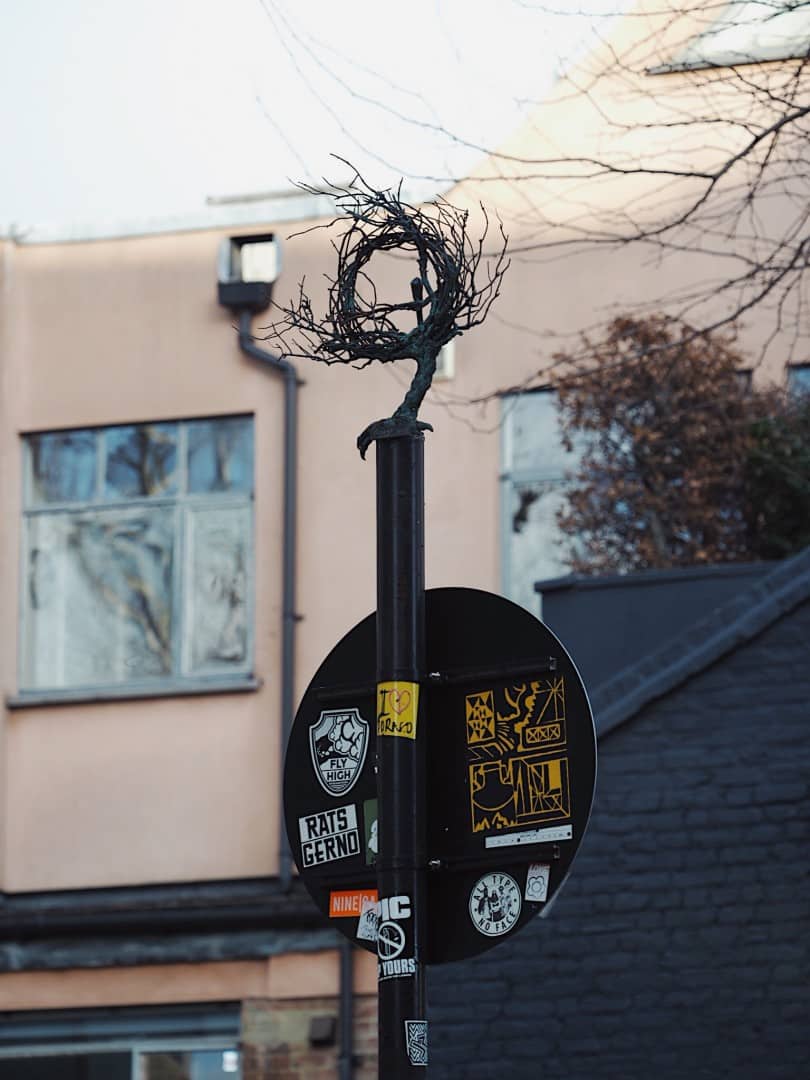 Originally from Paris, Lily Mixe is a graphic designer – something you can guess immediately by looking at the intricacy of her work.

With a keen focus on nature and specifically the ocean, she creates large-scale pieces with a trippy, detailed and often balanced visual style. The image below is by Columbia Road, commissioned by Alternative Ldn.

Part of the furniture on Hanbury Street now is the breakdancing royal guardsman. It was painted by Argentinian muralist Martin Ron back in 2013. 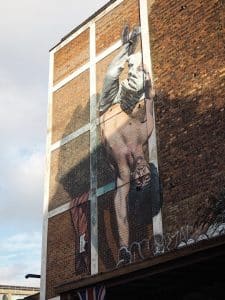 The one-armed handstand is a traditional move in Brazilian Martial Art style; Capoeira. The idea being this guard has just been standing all day and is now on his break – flexing his muscle and enjoying a bit of freedom.

Regarded as one of the most technically superb artists, it’s hard to believe Mr Cenz creates his pieces with spray cans. They usually feature women’s faces against a psychedelic background, as if the swirling colours are a physical manifestation of the music around her. 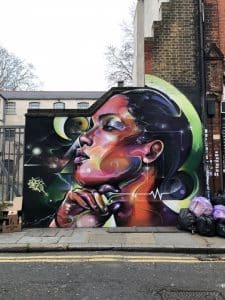 With another distinctive spray style, Schade’s work is usually silhouetted forms against a colourful background. 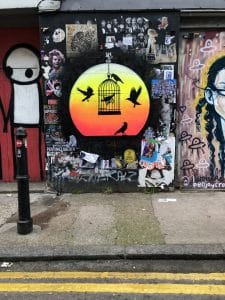 This spot on Princelet Street seems to be his own private gallery window, with an ever-refreshing portfolio of his work. They also tend to have political slant, a recent one featuring a nod to the area’s history of ‘Jack the Ripper’.

Compared to the quickly stenciled or pasted up work, ROA takes a long time to paint his pieces and so usually has permission to create them. This one on Hanbury Street is a heron, typically of his work which usually features animals that can be found locally. 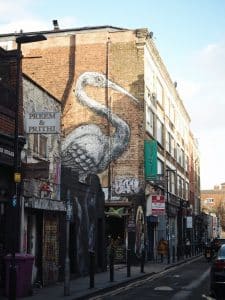 For London this tends to mean lots of squirrels, hedgehogs or rats. However the elegant heron is a nicer choice!

Another easily identifiable artist is Stik, whose stick men and women decorate doors and walls across London. 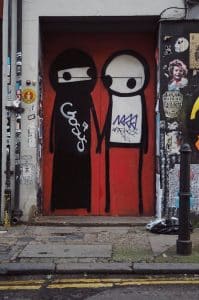 This one is testament to the multicultural community of Tower Hamlets and has been on Princelet Street off Brick Lane since 2010. Stik himself said he was nervous about offending the Muslim community with his artwork, but after researching the Qu’ran found it was ok to depict humans with no realistic depth. Perfect for his artistic style then!

Swoon (real name Caledonia Dance Curry) often discusses her inspiration from folk and art historical sources. The final paper paste-ups are often shrunken prints of giant wood and linoleum cuts, taking hours and days to complete. Obviously when you’re erecting – essentially – illegal art in urban landscapes, you want to have a technique to speedily put up your work, so paste ups are a good, fast solution!

Another female artists to finish with, Zabou’s colour work always brightens up Brick Lane. This one can be found at the Shoreditch High Street end and is typical of her work; often featuring bold human figures with a mix of classical influence and contemporary, political themes. 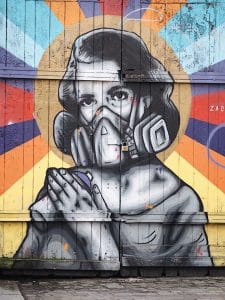 Have I missed out your favourite artist? Let me know in the comments!

Street Art, by its nature, is ephemeral and some of the pieces may no longer be around. However you’ll always spot fresh artwork at Street Art hubs like; Brick Lane, Star Yard, Hanbury Street, Ebor Street, Whitby Street and Chance Street in E1.

And if you fancy learning more about the actual history of these delightful streets, you’ll enjoy my ‘Spirit of Spitalfields’ walking tour! 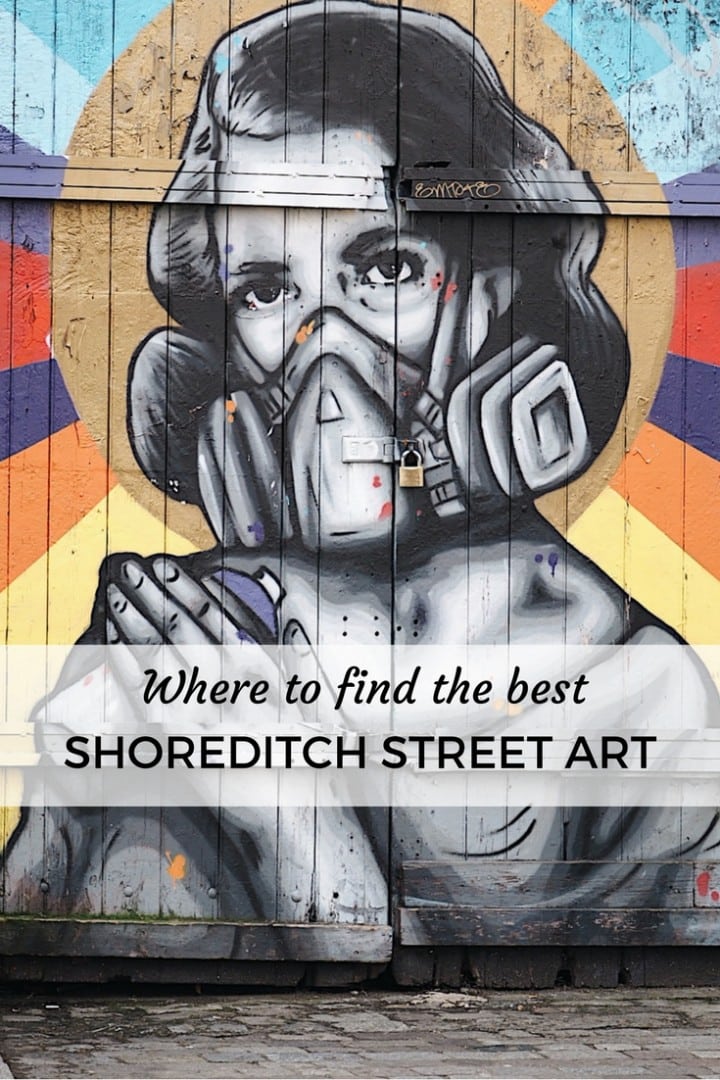