On 3 March 1943 an air raid siren went off in Bethnal Green and locals made their way to the tube, seeking shelter underground.

What followed was the worst civilian disaster during the Second World War, a story that has only recently been properly commemorated in the Memorial sculpture outside Bethnal Green Tube Station. 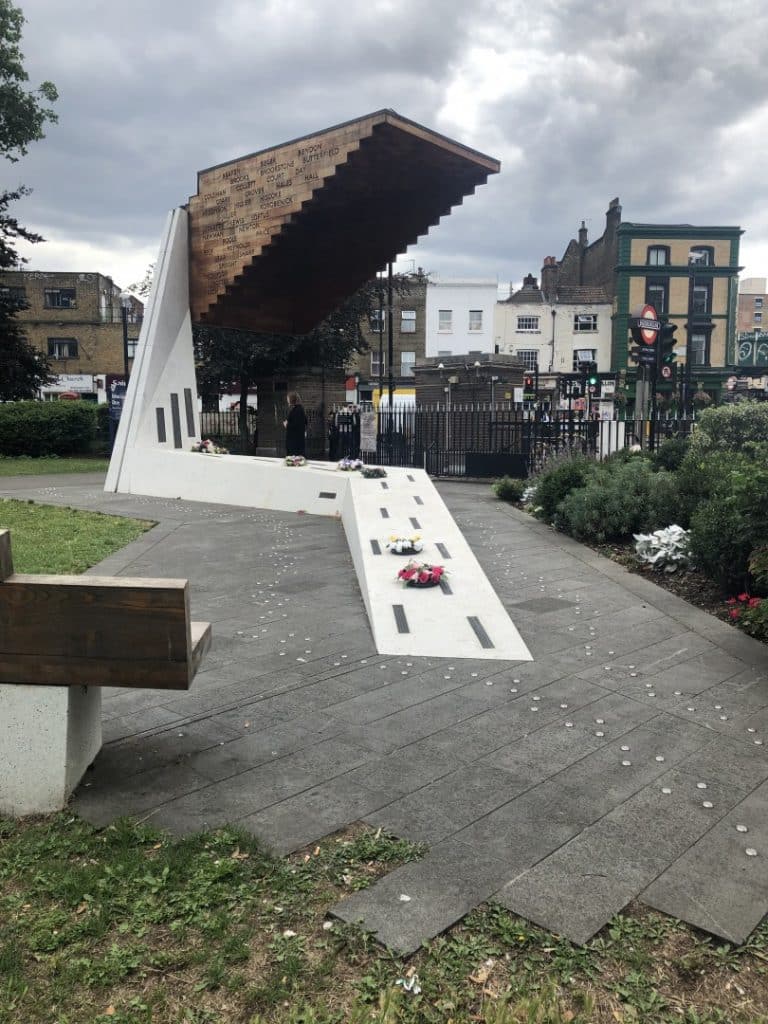 The unfinished Bethnal Green tube station had been used as a deep level shelter throughout the majority of bombing during 1940-41. It had a capacity of up to 10,000 people, usually sheltering around 7,000.

By 1943 air raids were less frequent and most people would stay at home. But the noises heard on the night of the 3rd March were different.

It was 8.17pm when the air raid sirens went off. People started filing into the shelter in an orderly manner, making their way underground to a space that had been in regular use as a deep shelter since 1940.

In the 10 minutes following the sirens going off nearby pubs and cinemas emptied. There was around 2,000 people in the shelter.

At approximately 8.30pm the searchlight went on and new anti-aircraft rocket battery sounds rang out from Victoria Park. People, wrongly assuming this meant bombs would fall imminently, started to panic.

While the alarms were ringing three London buses stopped, their passengers alighting at the Bethnal Green shelter. The crowd hurried down the concrete steps to the station shelter.

Slippy and poorly-lit, the 10 foot wide staircase would be treacherous at the best of times, but without a central handrail a woman with a child fell three steps from the bottom, causing others behind her to trip.

Not realising what had happened, crowds continued to push downstairs and before long around 300 people were trapped in a tangled mess at the bottom of 19 steps. 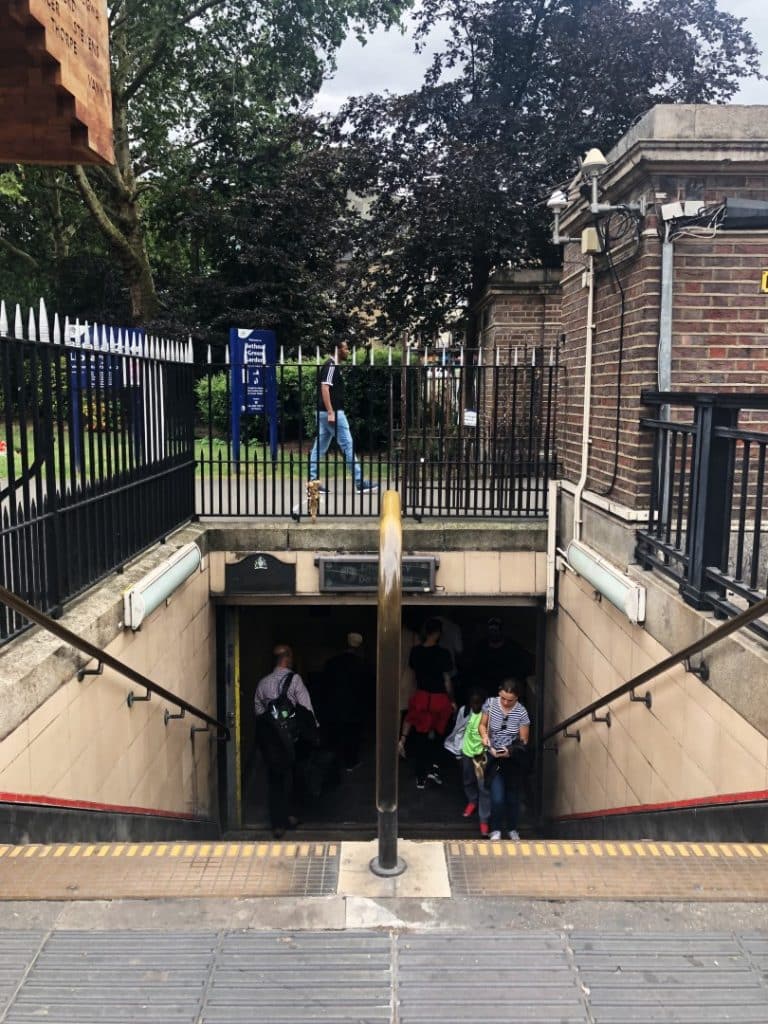 The entrance to Bethnal Green station today, thankfully with a central safety handrail.

Rescuers working above and below ground worked to restore calm and pull people out of the scrum but many people were suffocated in the crush.

It was only at 11.40pm the last casualty was pulled out. In total 173 had died – 27 men, 84 women and 62 children. 62 further people were hospitalised and 50 more were walking wounded, not to mention the psychological trauma suffered by bystanders. 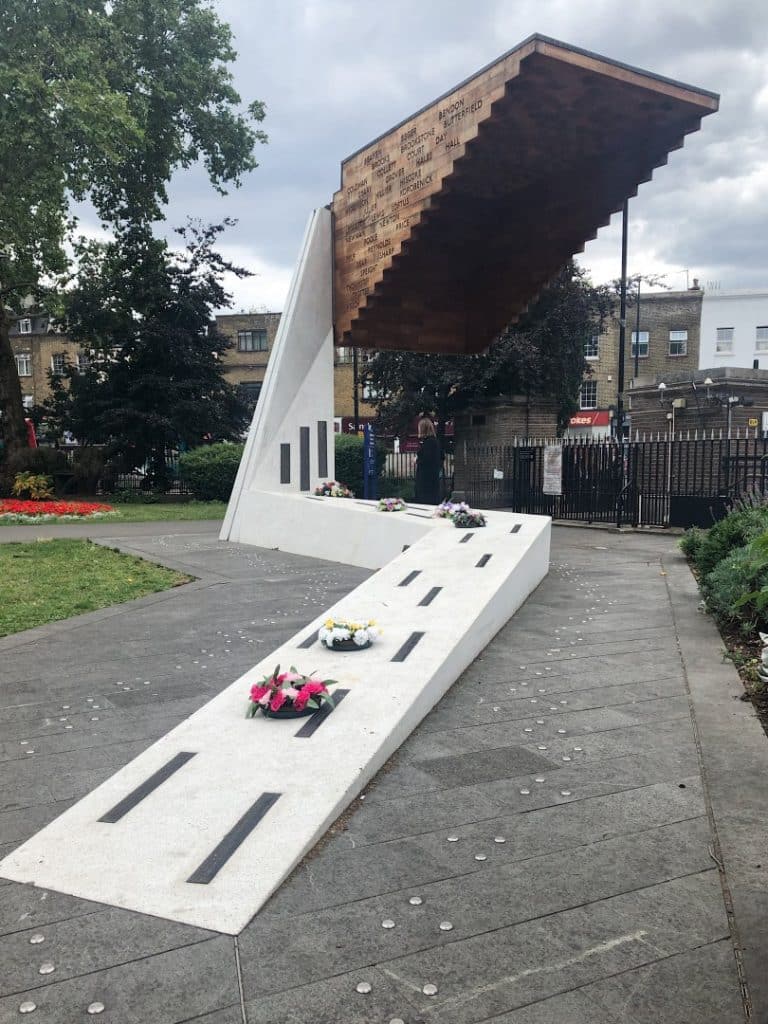 The Stairway to Heaven Memorial

It was the worst civilian casualty of the Second World War. But fears that the news would damage morale, the event was hushed up. Only 50 years later did a plaque appear by Bethnal Green Tube Station.

The final, finished memorial was unveiled in December 2017. Named the Stairway to heaven it is covered with names of the 173 victims of the disaster.

As well as the memorial, the Bethnal Green Memorial Project have created a memoryscape audio trail featuring witnesses to the disaster.

Among the voices is Dr Joan Martin, 100 years old at the time of the audio recording, who was a doctor at Queen Elizabeth Hospital for Children.

She describes hearing that the hospital would receive 30 patients who had ‘fainted’ in an air raid shelter. When they arrived all her team were surprised that they showed no injuries and were all unconscious.

‘The colour is a colour I shall never forget’

It was only when a 9 year old boy came to the hospital that evening, describing what had happened that they understood the patients had all died from suffocation, wet and lilac in colour but otherwise appearing unharmed.

Joan said all the staff were sworn to secrecy, the authorities not wanting any negative stories to reach the wider public.

You can listen via soundcloud here and read more personal stories from stairwaytoheavenmemorial.org