A Look Inside Bloomberg London

But why is it so great?

Speaking at the opening of the London Mithraeum (more on that later), Michael Bloomberg – businessman and former Mayor of New York – described himself as a guest in London, not wanting to impose on the historic skyline.

True to that, the Bloomberg building – which takes up 1.1million square feet of office space – spreads its bulk across The City rather than upwards.

Not just a buzzword for these guys, the Bloomberg London building is rated outstanding by BREAM, which awarded the finished building 98.5% (the highest rating ever handed out).

The reasons for this are multiple. It terms of water conservation, rainwater is collected and all water is reused. They also have scary-sounding vacuum toilets, meaning they use no mains water for flushing. It saves the equivalent of 10 olympic swimming pools a year.

The bronze fins are not just attractive but also useful, they can open and close providing a natural ventilation mode which saves on mechanical cooling. They also have a combined heat and power system on-site, 0perating from a single system which increases efficiency. Oh, and they’ve been zero waste to landfill since 2010.

One of the surprising aspects of the building is the choice medium. The decision to use wood, stone and bronze was part environmental and part whimsical, a throwback to earlier building traditions.

An incredible 10,000 tonnes of portland stone make this the largest sone building to grace the City of London since St Paul’s Cathedral. Which, coincidentally you can admire from the West-facing balconies.

And when you step inside that difference is palpable. Warm wood versus cold stone definitely makes for a more welcoming space.

But look closed and not all is as it seems. The wood is porous, aiding airflow around the building. In fact the whole building includes ‘Smart CO2‘; sensing controls which distributes air according to the number of people in each zone of the building. This ability to adjust airflow is expected to reduce CO2 emissions by around 300 metric tonnes per year.

Further unique details can be spotted in the ceiling, the petal-shaped lighting gives a far better experience than traditional office strip lighting.

Not just pretty, they’re more eco-friendly too, using 500,000 LED lights that use 40% less energy than normal. Their shape also lends itself to better air supply, cooling, and acoustics.

Another difference is the lack of central concrete core. Look to any new building on the London skyline and you’ll see a grey mass rising amidst scaffolding. But not here, with Bloomberg they have a huge spiral staircase that cuts through the floors.

“…a spiralling ramp at the heart of the building ensures a connected, healthy and creative environment.” Norman Foster, Architect of Bloomberg London

It certainly makes the space dynamic and open, encouraging people working there to walk up sloping steps rather than use lifts.

And there’s a fish tank. Because, why not?

The real reason is because of the calming effect on staff. Each Bloomberg office has a tank, supposedly because each time a Bloomberg terminal was sold (terminals are a software which give unprecedented real time financial news and data) the company bought a fish in celebration…

But it’s not just marine life that provide visual stimulation.

Bloomberg is a big patron of the arts, sponsoring gallery shows in London and internationally. It seems only fitting then that they showcase great art within their buildings.

Huge pieces by Michael Craig-Martin add a colour pop to the walls. He’s known for simplified line drawings of everyday items and often plays with scale.

This yellow watch is split across two floors, adding to the idea of open space and acting as helpful way-finders for staff!

In a circular break out space the walls are lined with a tapestry. An usual choice of medium in-keeping with the traditional building materials. It’s called ‘Pomona’ and by Californian artist Pae White. Look closely and you can see bugs and insects overlaid on a city scape.

It’s a comment on the declining world bug population and the title ‘Pomona’ is a reference to the Roman Goddess of fruitful abundance.

The last piece of art is so well suited to the building you almost don’t see it. It’s the milled aluminium centrepiece of ‘Vortex’, the double height entrance space. By Danish artist Olafur Eliasson, it’s called ‘No future is possible without a past: Wave ceiling’ and acts as both a pond-like floor when view from above;

As well as a shimmering skylight from below…

A major feature of the London Bloomberg location is that it’s slap bang on top of a 2,000 year old Roman temple. Classic London.

To read my post about the London Mithraeum, a free immersive attraction, click on the picture below. 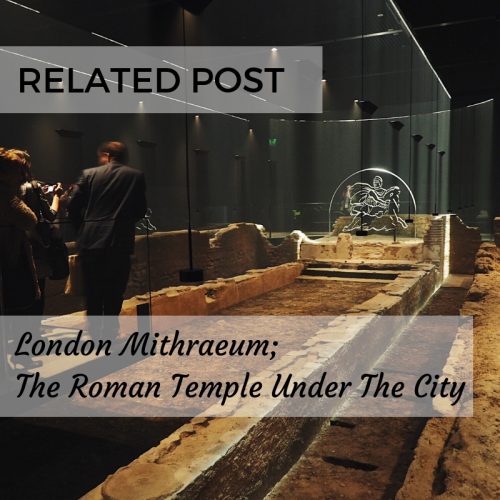 Another historic neighbour is the lost River Walbrook. It used to flow into the Thames until it began to be covered from 1440.

So while Bloomberg was conscious of not intruding on the London skyline, they were equally concerned about improving the public realm. With the artwork they’ve created a nice walkway with a nod to the history.

As it’s a working office building, Bloomberg is not open to the public.

You can however visit the London Mithraeum and contemporary art space for free Tuesdays – Sundays. Fingers crossed the Bloomberg will also run tours again for next year’s Open House London, taking place 21-22 September 2019.

There’s also a video from RIBA to give you an even better idea of what the building’s like inside!