The Bull and Mouth: A Lost London Coaching Inn

Until the mid 1800s coaching inn were littered across London. A combination of pub, restaurant and hotel, they served weary travellers making their journeys in stages across the country (hence, stagecoach).

There’s only one traditional galleried coaching inn left in London and that’s the magnificent George Inn. 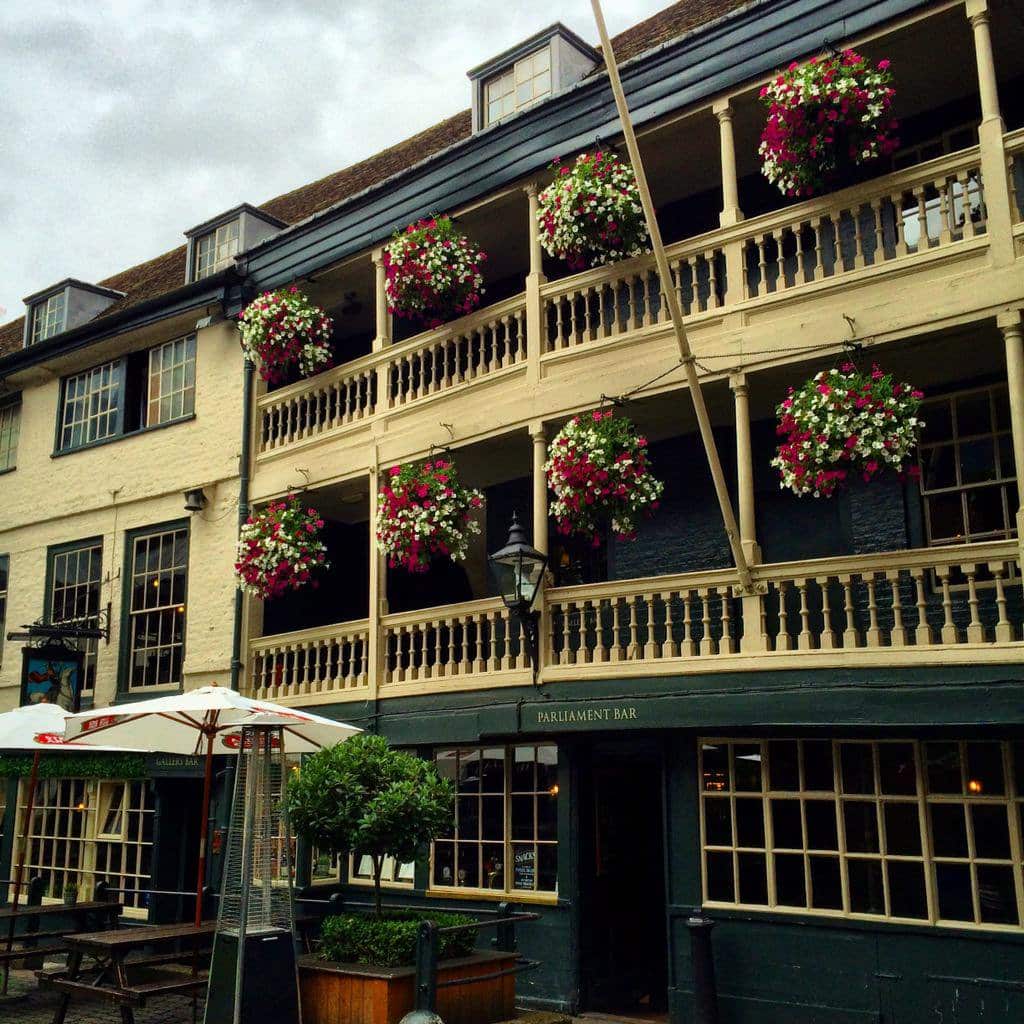 Rebuilt in 1676, it survived The Blitz and (arguably more deadly for coaching inns) the railway boom) so can still be found off Borough High Street.

However, other famous coaching inns are far harder to find.

Look Closer at the Museum of London 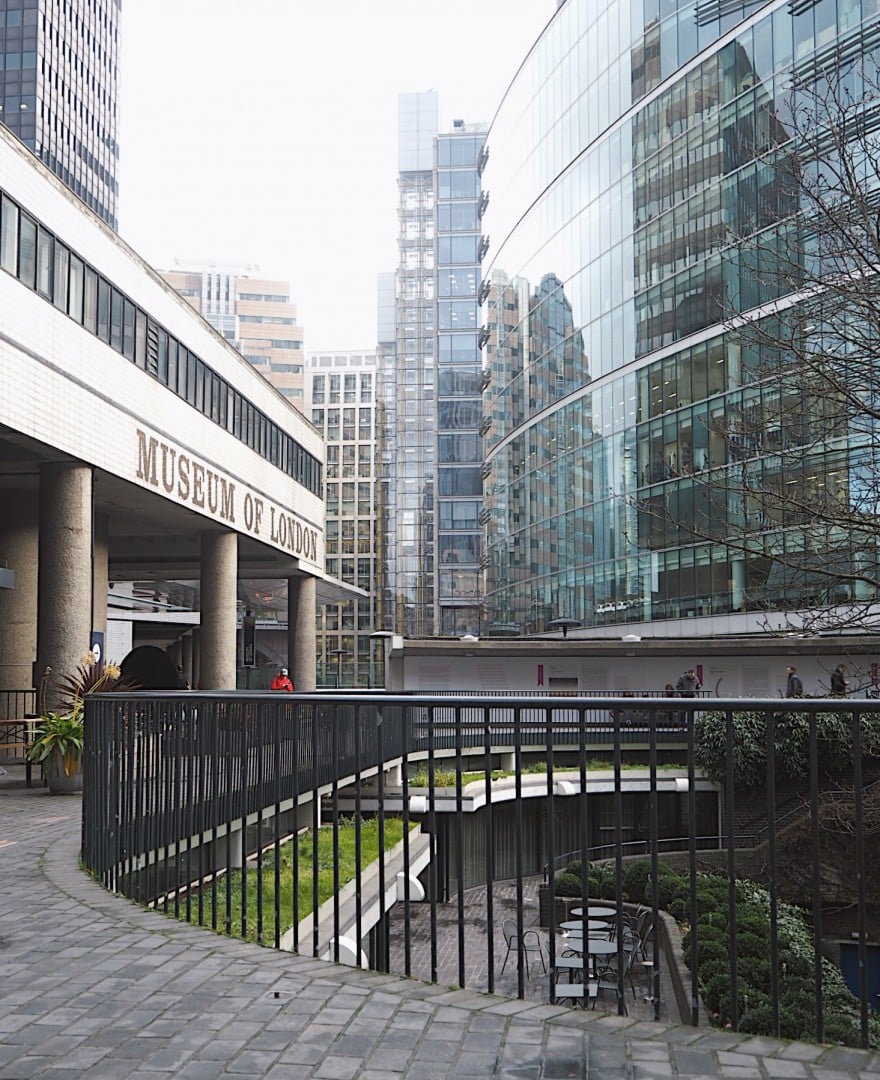 I’ve visited the fabulous Museum of London many times, but it wasn’t until recently that I spotted this bit of masonry in their sunken garden.

But look closer and you’ll spot this magnificent reminder;

It’s the last surviving piece of the Bull and Mouth Coaching Inn, one of around 20 inns in the City alongside a whopping 700 underground horse stables.

There’s a cryptic inscription along the base;

Milo the Cretonian an ox slew with his fist and ate it up at one meal. Ye gods what a glorious twist.

Which – as London Remembers points out – probably refers to Milo of Croton, a 6th Century Greek wrestler. Why? I’m not entirely sure, but perhaps it’s just a convenient classical reference to a bull/ox.

But more obvious is the clever graphic design of the name; Bull and Mouth. A full bull, standing within a gaping mouth! 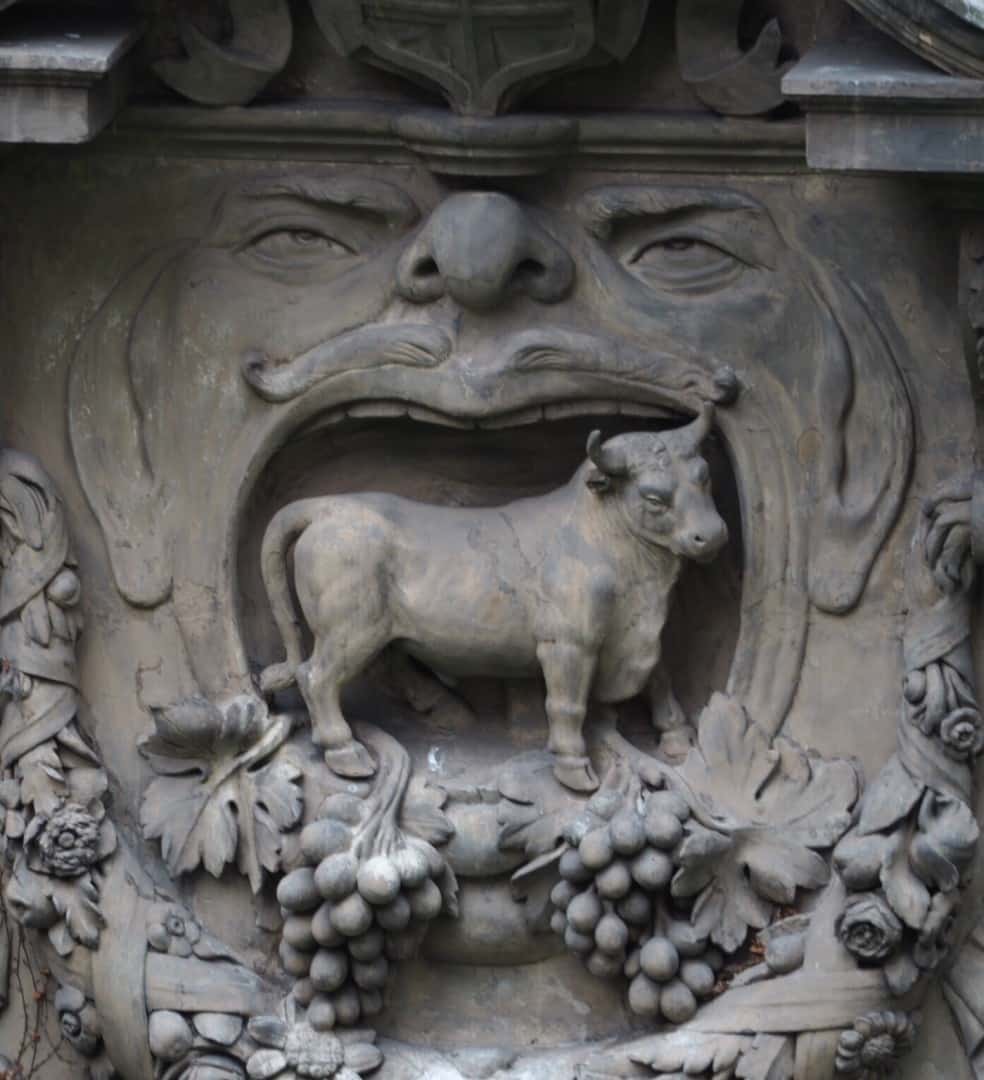 This name; Bull in Mouth, is actually nothing to do with a mouth or an animal. It comes from the fine English tradition to completely Bastardised a word. Sure enough, Bull and Mouth started out as the more elegant Boulogne Mouth, a nod to the French town and harbour besieged by Henry VIII in 1544, suggesting it was founded in the 16th century.

The Bull and Mouth Inn predated the Great Fire of London and once stood on Bull and Mouth Street, today the site of Postman’s Park. The street can be clearly seen on the 1676 J Ogilby and W Morgan map;

There’s a surviving image of its inner, galleried yard painted by George Shepherd in 1817.

The Inn was demolished and replaced by the Queen Hotel around 1830 but there’s an engraving showing the new building which is dated 1829 and it looks like this ornamental sculpture was affixed to the new site.

That, in turn was bulldozed (sorry) in 1888 to make way for General Post Office buildings, but you can still see a City of London Corporation blue plaque. 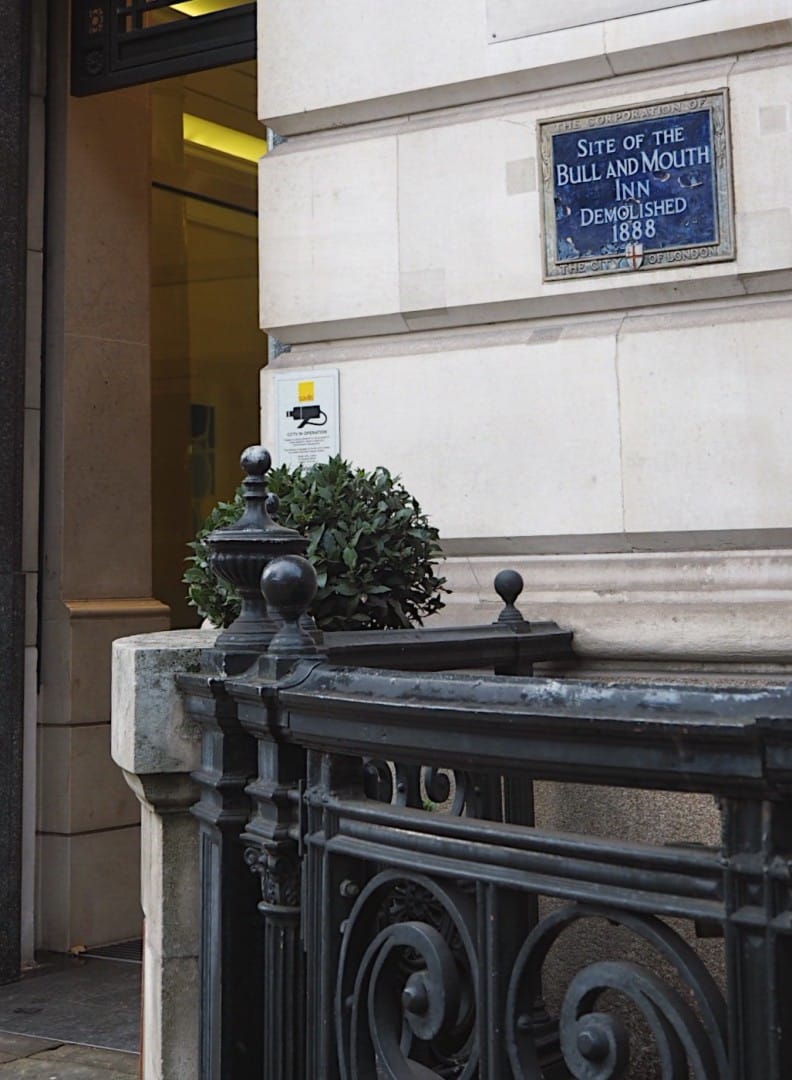 You can read more about how the Post Office quarter developed in the 19th century (and why there’s a last fragment 7 miles away!) in my blog post here. 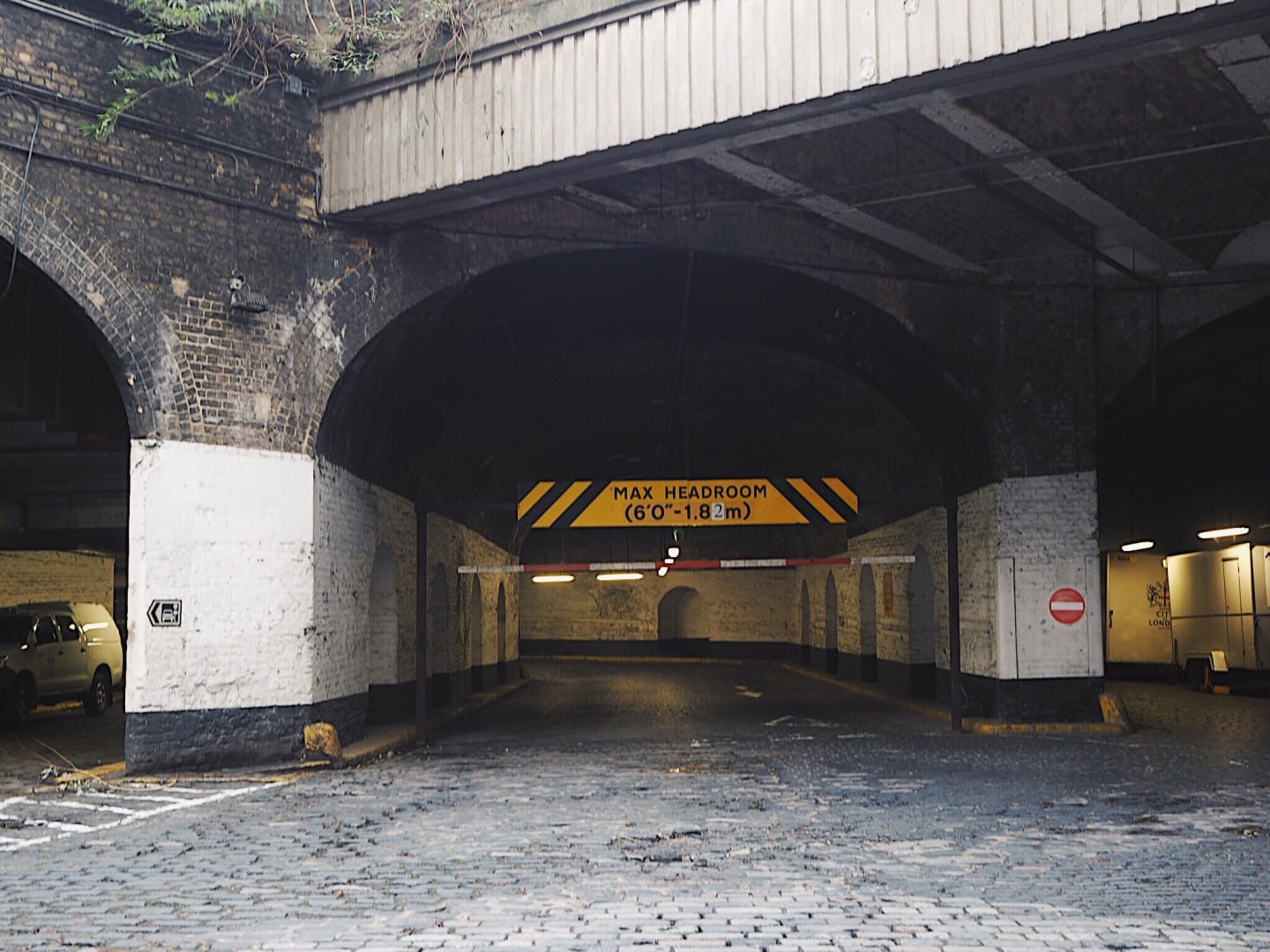 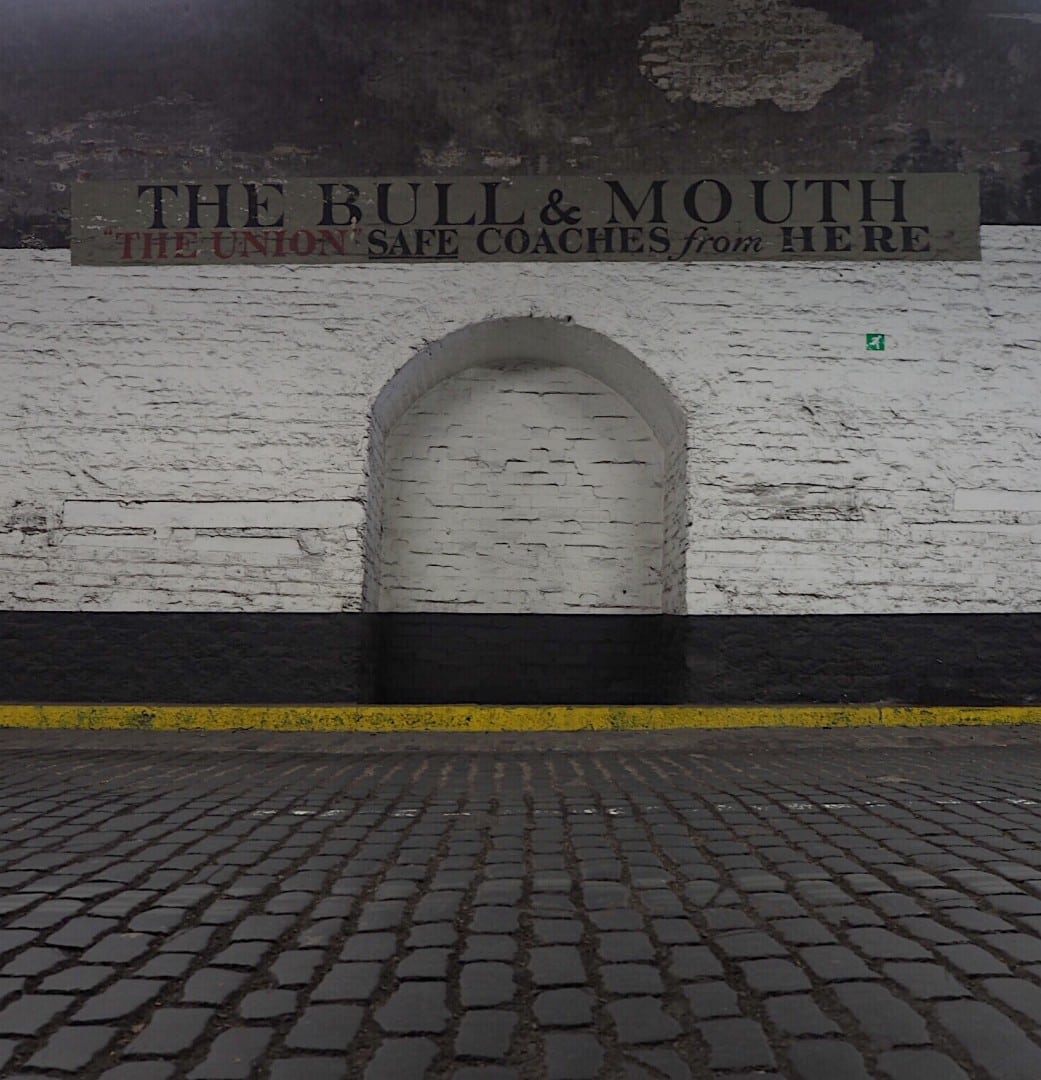 As tempting as it would be to imagine this was somehow part of the inn’s underground stables, sadly, I think that’s a bit far-fetched. It’s about half a mile from where the inn used to stand and (though it is covered) the paintwork looks pretty new to have been there since the 19th century.

Given how popular Smithfield is as a film location, it seems more likely that it’s simply a leftover film set that’s remained behind to puzzle us curious Londoners. I haven’t been able to determine which film it might have related to, so if you have an idea let me know!

As for the remaining sculpture, given that the Museum of London is moving out at the end of 2022 (read about their progress in Smithfield here) it remains to be seen what will happen to it, perhaps it will be moved inside their new galleries?

This blog was originally published 9 January 2018 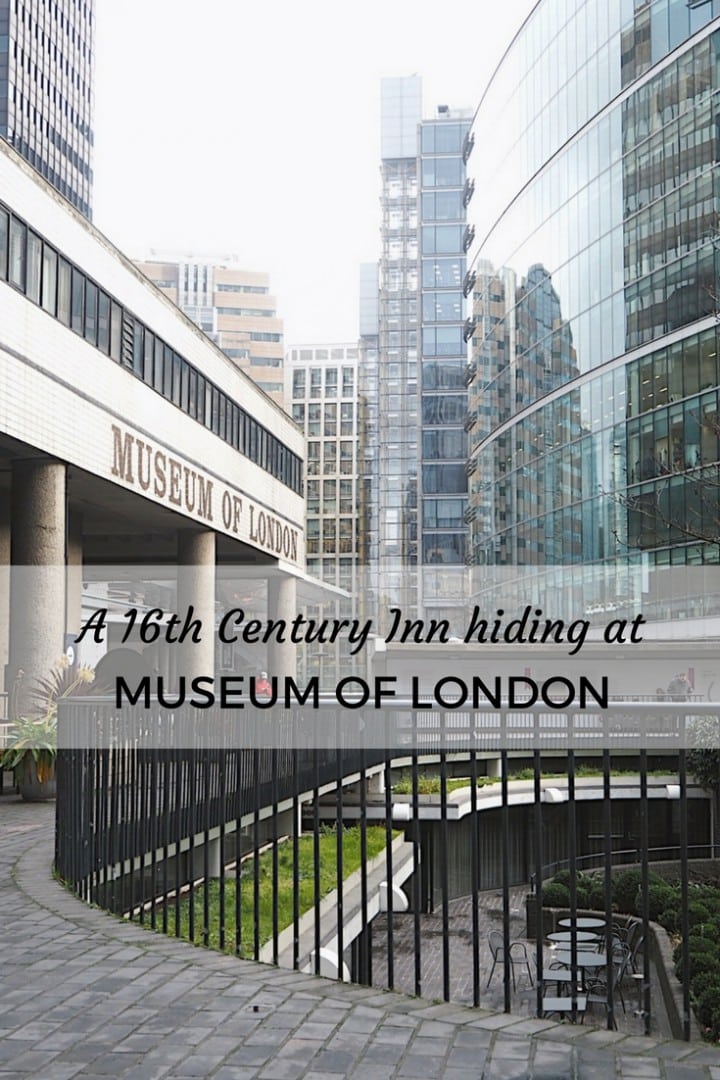