On the last part of Hampstead Road before it morphs into Camden High Street is one of London’s most unusual architectural gems; the former Carreras Cigarette Factory, sometimes called simply the ‘Black Cat Factory’.

Mornington Crescent was once a green semicircle, a lovely space for the residents in white stucco terraces. However, in the 1920s a huge factory arrived, causing outrage from local residents.

Today this has been converted into offices, but stands as one of the most eye-catching and unusual of all London buildings.

The Carreras Tobacco Company began in 19th century London. Don José Joaquin Carreras Ferrer had a shop at 61 Prince’s Street near Leicester Square, but supposedly came from a line of Spanish apothecaries and so used ‘Established 1788’ on much of his branding.

Today that building survives as 7 Wardour Street, just opposite the W Hotel. The Black Cat image adopted by Don José supposedly came from a domestic cat that loved to sit in his Wardour Street shop.

In 1886 it was used as a trademark by Carrera, the JJC below standing for José Joaquin Carreras. 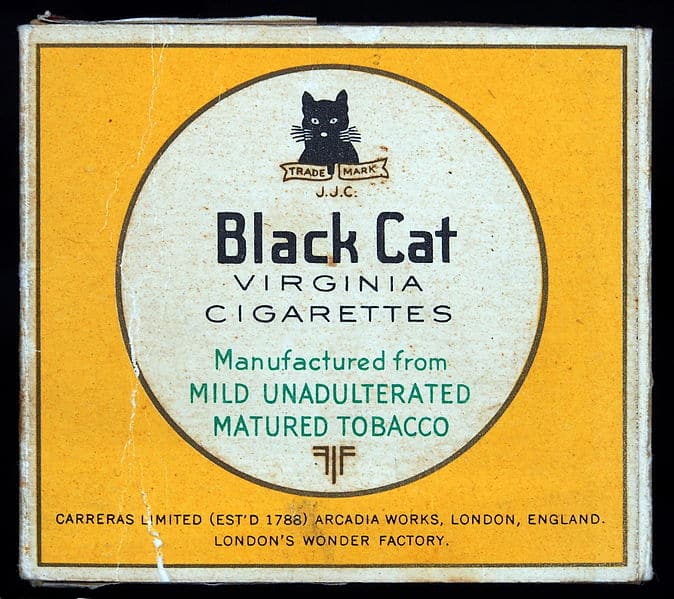 By 1904, Carreras was run by a Mr W J Yapp and Bernhard Baron. Baron, a Belarus-born US immigrant had invented a cigarette-making machine and arrived in England to sell his patent.

Instead of merely selling his idea, Baron set up a large factory in Aldgate producing machine-made cigarettes; Baron Cigarette Machine Company Limited. It was towards the end of that year that a stand alone Black Cat Cigarette brand was launched.

Story of the Black Cat Factory

In 1928, having outgrown previous sites, the Arcadia Works opened in Mornington Crescent. It was designed by Marcus Evelyn Collins and Owen Hyman Collins.

As well as its striking design (we’ll have a closer look shortly) the building was somewhat revolutionary. It was the first to use pre-stressed concrete and at the time was the largest reinforced concrete factory in the country.

It was also the first to install air-conditioning and have a system for dust extraction. The brand were quick to emblazon this on marketing, extolling the virtues of their ‘Hygienic Wonder Factory’. Some posters went further, celebrating ‘a pure product from a clean factory’.

Through modern eyes it seems pretty audacious to associate smoking with clean air. It’s worth also remembering the further irony that the factory was plonked directly on Mornington Crescent, a lovely bit of green space. 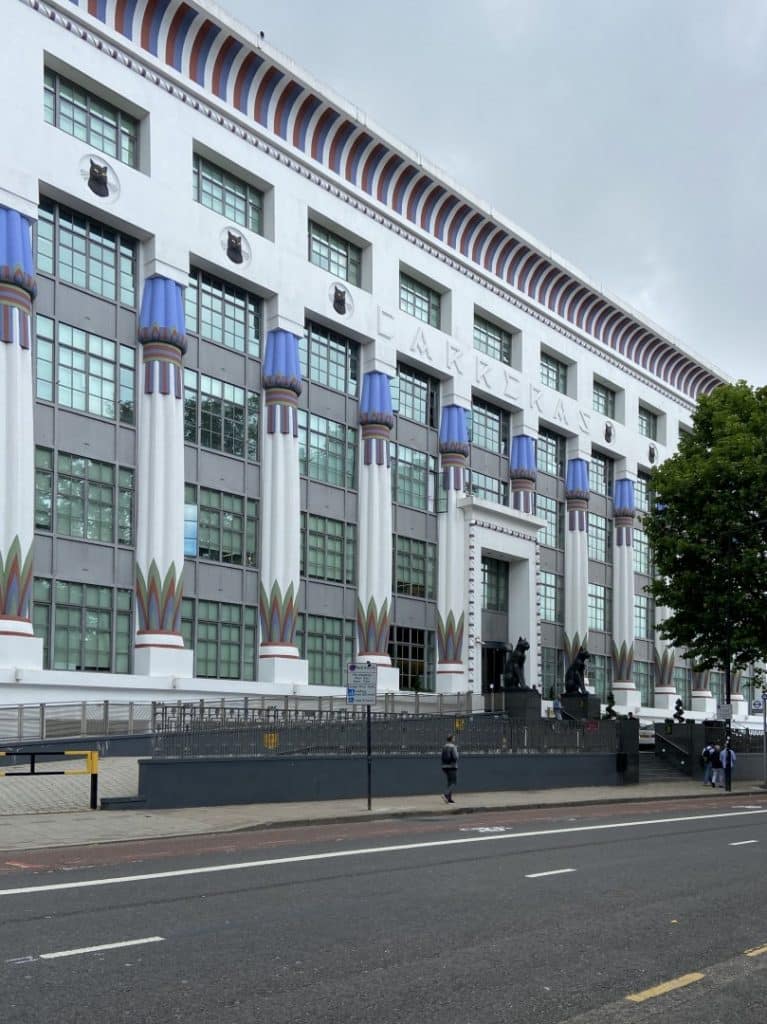 However, to its credit, the Black Cat Factory seems a good place to work. Offering a full welfare service to its employees. There’s a local history blog here where you can read more.

The extraordinary design was fuelled by one of the most exciting archaeological discoveries ever seen; Tutankhamun’s tomb in 1922.

The discovery prompted a wave of Egypt-mania in fashion, architecture and design. Other examples include the famous Hoover building along the A40 as well as the former cinema on Essex Road (image below).

The more you look at the building, the more of these stylised features jump out at you. For example, the lettering of Carrera is designed to look like it’s been carved into stone. 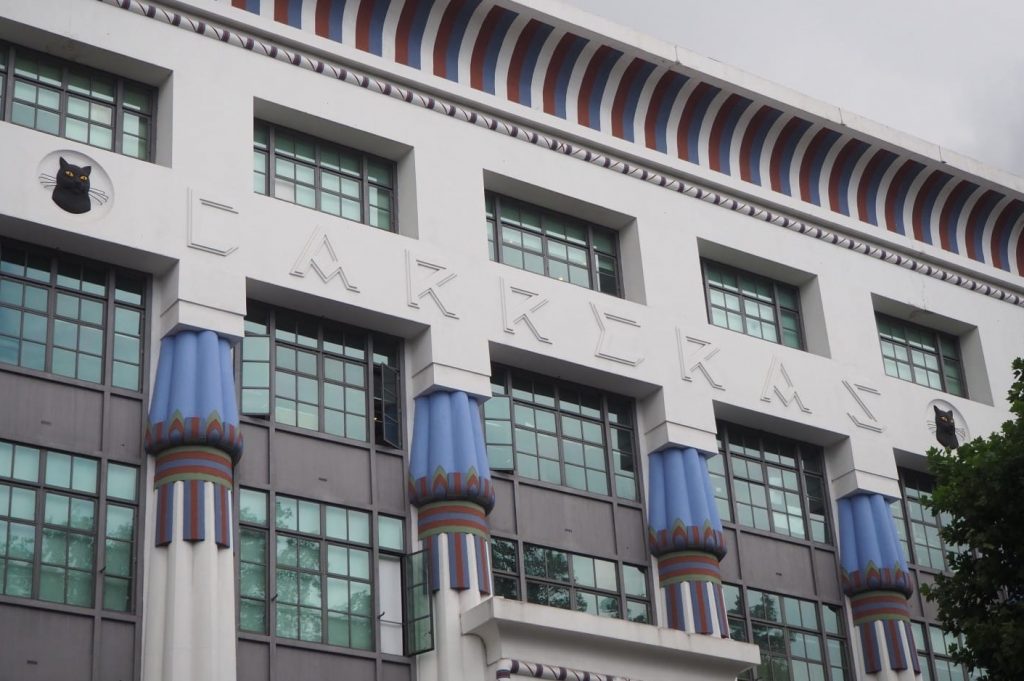 And the columns with red, green and blue details are thought to have been inspired by the Tomb of Panhesy (also spelled Panehsy or Panehesy, c.1549-1292 BC) 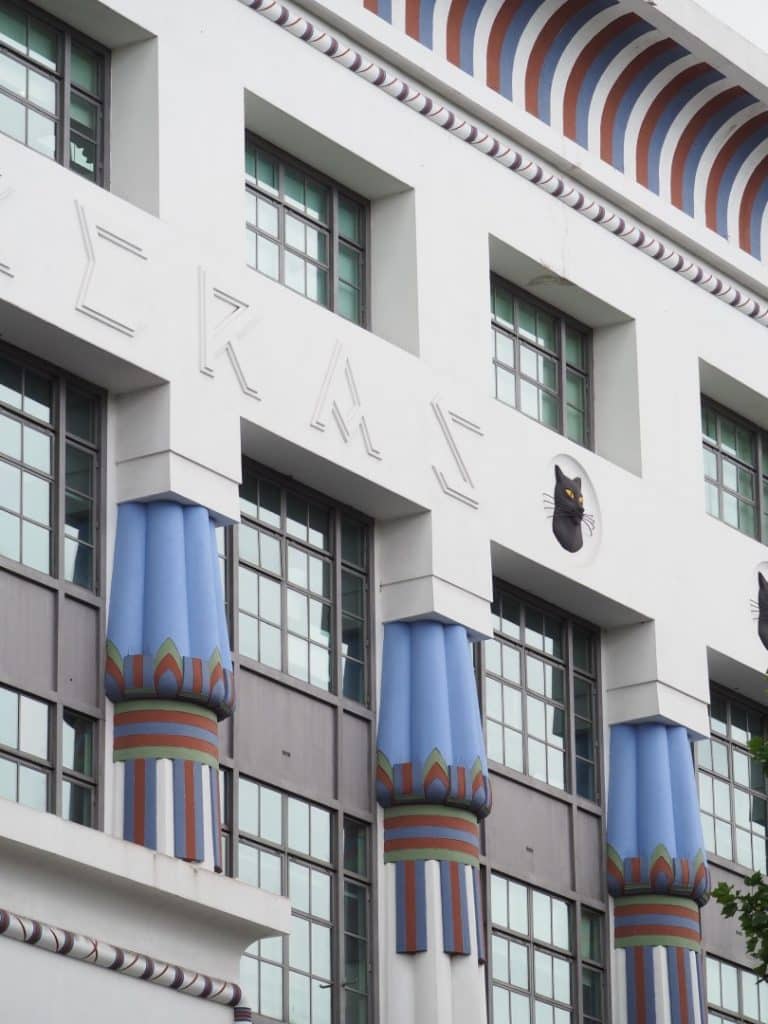 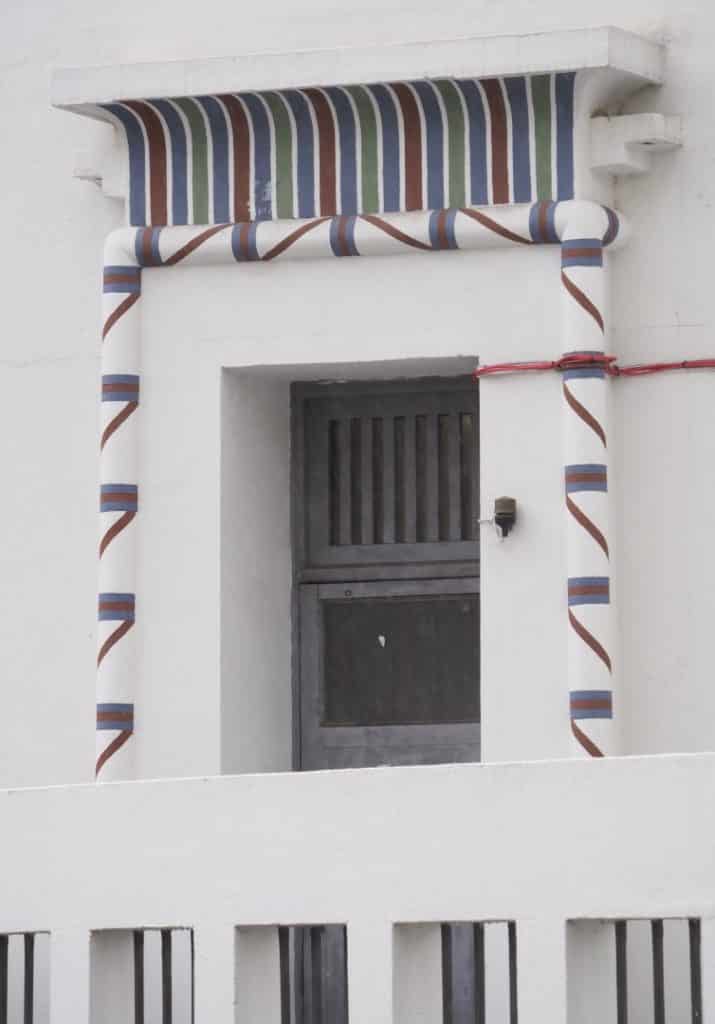 Flanking the main entrance are a pair of huge black cats, cast at the Haskins Factory, London. 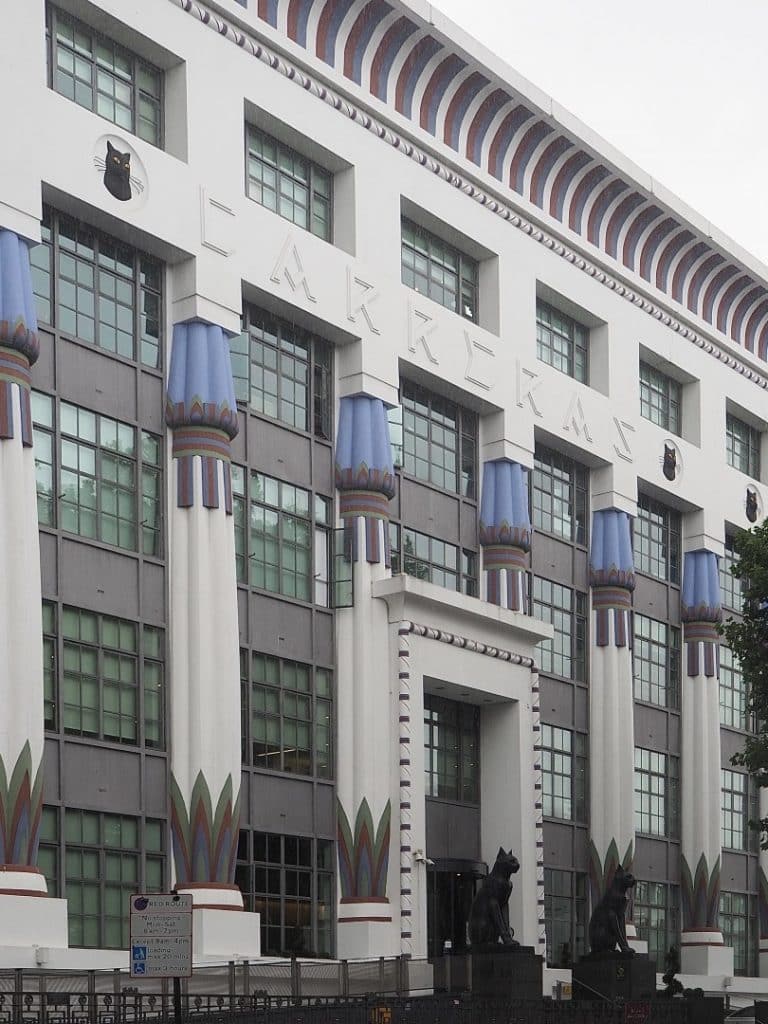 As we’ve heard, the black cat was already part of the brand’s story, so using the Egyptian Goddess; Bastet seems a logical choice.

The ones seen today aren’t the originals. One was moved to the new factory in Basildon and the other to Jamaica in the 1950s. In fact the majority of the Egyptian Art Deco details were destroyed in the 1960s as it was remodelled for office space. 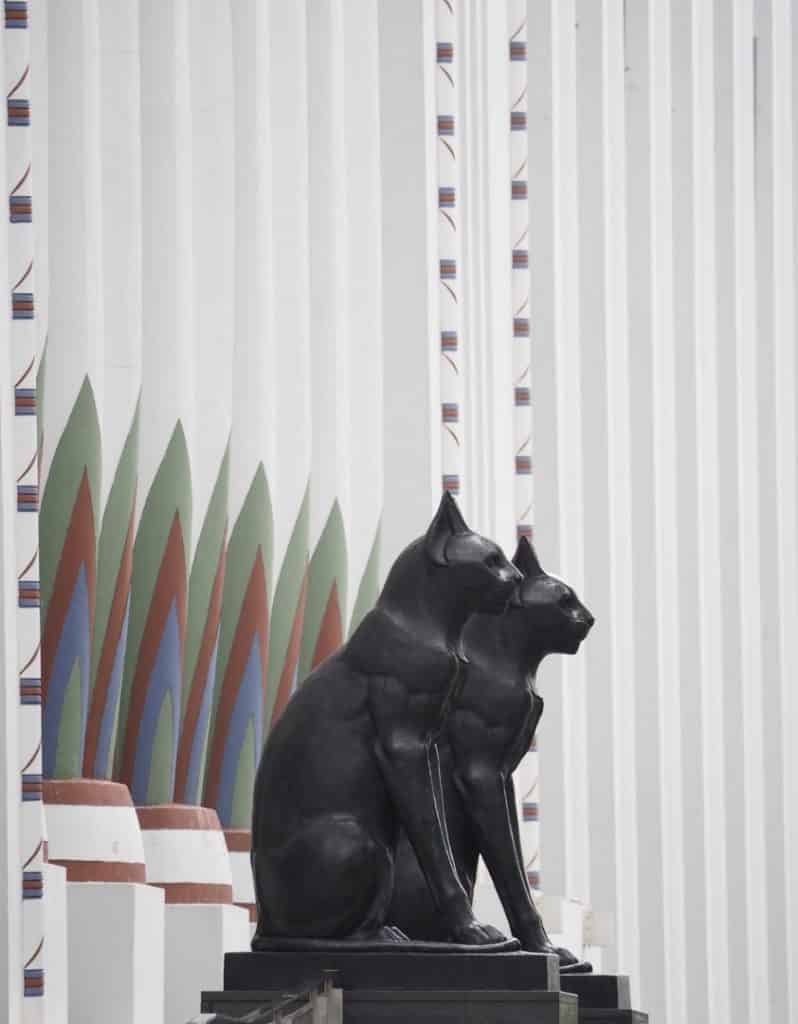 The current flourishes and sculptural details are part of the restoration works from the 1990s. The replica casts were by Munkenbeck and Marshall, together with Finch Forman

Further black cats stare down at you from above… 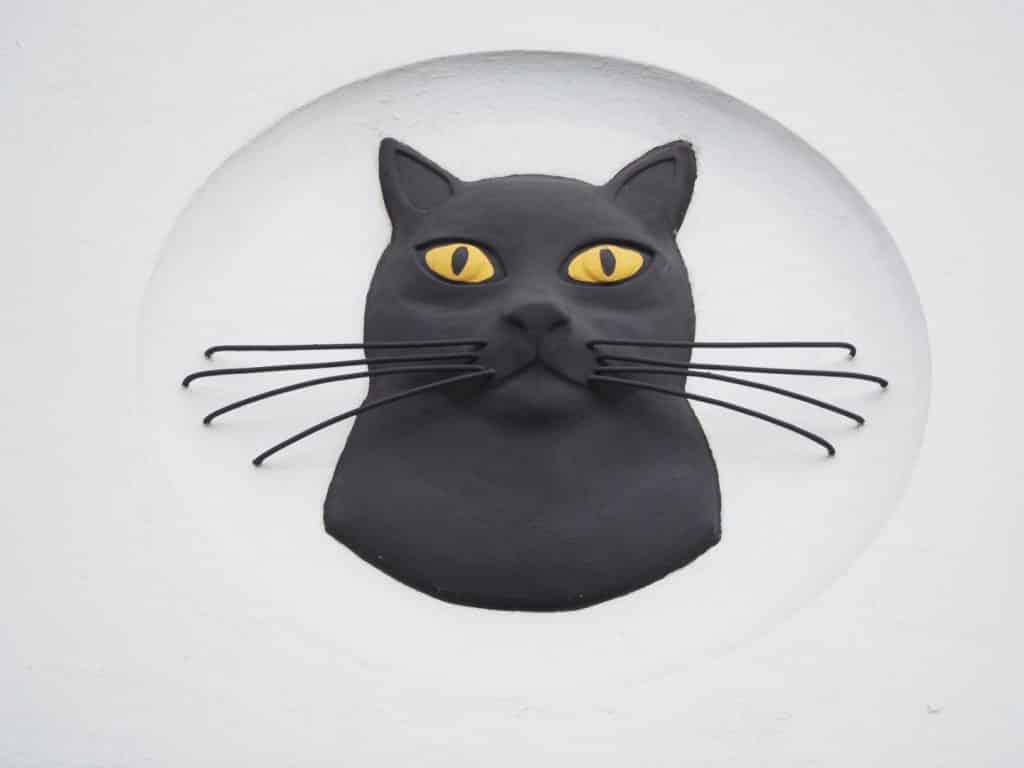 Today the converted office spaced is still used and is home to ASOS fashion brand along with the British Heart Foundation (a further irony!) 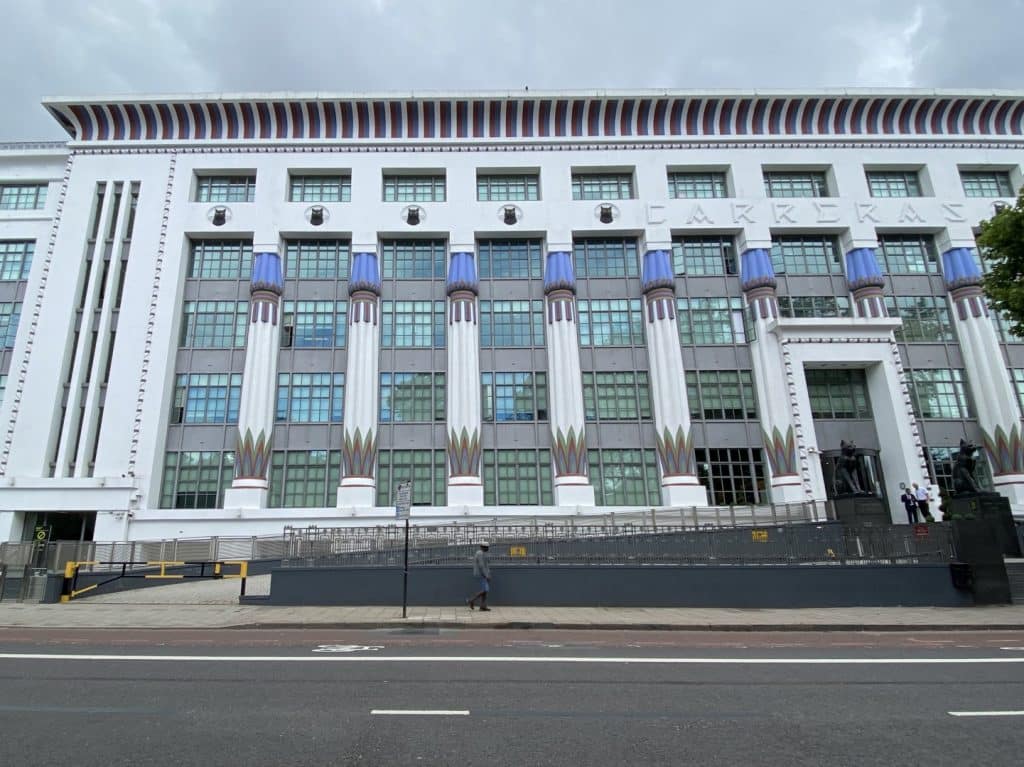 Have you walked past this impressive bit of architecture? Maybe take a closer look when you next stroll past!