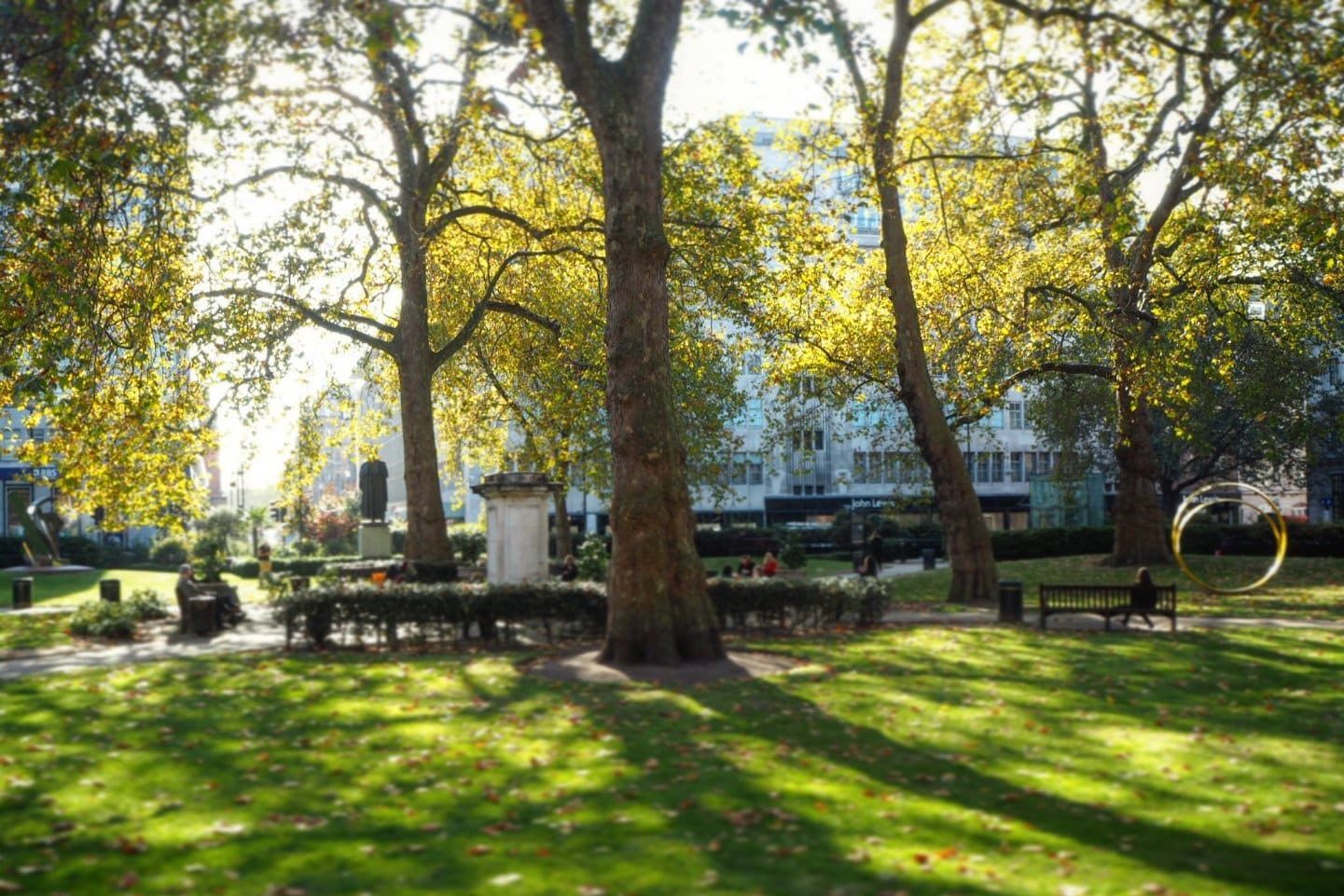 You wouldn’t guess, looking at peaceful Cavendish Square today, that it’s been the site of several historic controversies.

But first, a bit of background…

Like many of the West End’s squares, Cavendish Square was a piece of speculative town planning for residents. In this case it was the idea of Edward Harley (named in nearby Harley Street) who was the 2nd Earl of Oxford and Mortimer.

The name Cavendish comes from his wife Henrietta Cavendish-Holles. The pair were married at Wimpole Hall, Cambridgeshire so if you know the surrounding street names, between them they have them all fairly covered!

In 1717 he set out this square as a centrepiece for a Marylebone Estate, aiming to replicate the success of nearby Hanover Square and similar residential developments in St James’s. However, the square wouldn’t be complete for another 50 years following economic recession (the South Sea Bubble).

A major loss was the fact the Duke of Chandos never built his vast mansion on the North side of the Square. Instead two townhouses survive in the Palladian style.

That’s not to say it was a total failure though, it still attracted wealthy aristocrats, artists, politicians and the odd Royal as residents.

But what of the controversies in Cavendish Square?

At the centre of Cavendish Square is a sculpture conspicuous by its absence.

It once housed an equestrian statue of the Duke of Cumberland, third son of George II, erected in 1770.

The Duke was famous for his brutal victory at the Battle of Culloden in 1746 (where thousands of outnumbered Scottish Jacobites were slaughtered) which earned him the nickname; ‘Butcher’. The statue – like the man – was never that popular and was removed in 1868, never to be replaced.

Well, not in bronze in any case.

In 2012 you may remember that a version of the statue appeared in soap form by the Korean sculptor Meekyoung Shin. The eerie work took 4 years to slowly dissolve and the mutated fragments were only fully removed in 2016.

As mentioned above, No.20 Cavendish Square was the private home of Henry Herbert Asquith who would become Prime Minister from 1908-1916.

During the early 1900s, when serving as Chancellor of the Exchequer, he was a strong opponent of the votes for women. Given one tactic of the Suffragettes was to refuse to pay taxes until they received a vote, they saw their aims as linked with his office and wrote to him to request a meeting.

This was refused and so after two more ignored letters they wrote again informing him that they would arrive at his home on 19 July 1906. When they arrived at 10am they were told he’d left for the Treasury (he hadn’t. But rather had slipped out the back door as they waited patiently at the front). They returned two days later.

On 21 July 1906 between 30-40 women congregated on Cavendish Square, they were met with a robust Metropolitan Police force attempting to block their way.

Theresa Billington, one of the leaders of the group, was struck in the face and pined against some railings, held by her throat until she was blue in the face.*

There was further violence against women that day (despite the protest being “peaceful and ladylike” according to Sylvia Pankhurst). Many were arrested including Billington who was sentenced to two months in Holloway Prison but an anonymous reader from the Daily Mirror paid her fine and she was released.

Since 1920 No.20 has – somewhat fittingly – been the headquarters of the Royal College of Nursing.

The North side of the square was intended to be filled with a palatial house for the Duke of Chandos. But following the South Sea Bubble Crash of 1720 nothing progressed until 1769 with the MP George Foster Tufnall built houses here with a row of mews behind.

From 1889 the building were occupied by the Convent of the Holy Child of Jesus and that’s who commissioned this striking statue on the archway in 1953.

Using lead from the bomb-damaged roof Jacob Epstein had been commissioned to create a Madonna and Child scene by Louis Osman (the architect who had created the arched bridge across the road).

It may not seem provocative today, but this highly Catholic iconography in a very public place was deemed bold to say the least.

There is another side to the story that the nuns were supposedly surprised that such an integral Christian scene had been undertaken by a Jewish artist without their prior knowledge.

While we cannot read the minds of the Nuns at the time, Epstein himself reported that “they showed the warmest interest in the work and asked to be allowed to contemplate it quietly and alone some time.”

What was discussed between them over the sculpture I suppose we will never know!

*As described in Sylvia Pankhurst’s account of the the history of the suffrage movement.