You might not give this retail park much thought, but it’s a clue to the former brewery along Mile End Road. Thankfully, if you know where to look, there are far more attractive historic reminders to be found!

It started with a man called Robert Westfield, member of the Worshipful Company of Brewers’ who partnered with Joseph Moss in 1757 and moved into the new Anchor Brewery in Mile End. He later joined with John Charrington, the company becoming “Westfield, Moss & Charrington”.

Below is a section of the Charles Booth Poverty Map (1886-1903). The Red Dot is the rough site of the Anchor Retail Park today. Above it and to the right you can see the word ‘Brewery’

Eventually Moss and Westfield retired, with John and his brother Henry Charrington taking full ownership. From 1794-1833 Henry (known as Harry) lived along Mile End Road in Malplaquet House, more on that shortly.

By 1807 they were the second largest brewers in London and when John died, Harry’s son Nicholas joined the team.

You can see older photos of the brewery site on the Spitalfields Life website here.

In the 19th century they expanded out of London, acquiring smaller breweries until in 1962 they merged with United breweries. In 1975 the Anchor Brewery closed but offices were still in use. Piece by piece it was demolished apart from the remnants left today.

Remains of the Anchor Brewery

As mentioned before, the main brewery site is now occupied by Anchor Retail Park. However, the Brewery Offices – built 1872 – survive on the corner of Mile End Road and Cephas Avenue.

Around the corner on Cephas Avenue you will also find the 1927 extension. Like the earlier offices, these have all been converted into flats.

As well as the huge industrial site of the brewery itself, the company also purchased land for housing. This included grand homes for the owners and more modest accommodation for the employees.

And this is where we get the aesthetic stuff. Starting with the grandest house, Harry Charrington lived in Malplaquet House.

It looks intriguing from the street but have a look inside here – trust me, you won’t be disappointed!

Also once owned by the brewery is this charming terrace of Georgian houses at 107-113.

A fantastic example of early London terraces, it was known as Ireland’s Row after the builder; Antony Ireland. However, looks can be deceiving and only 113 is entirely authentic.

Aside from 113 (far right in the image below) all of the block had shopfronts added in the 19th century. They were then substantially – but sensitively – restored by the Spitalfields Trust in the early 1990s.

I think you’ll agree with me that Spitalfields Trust did a fantastic job. You can read more and see incredible photos of their prior state here.

But the grand houses aren’t the only survivors. Behind an unassuming green door on Cleveland Way is a most unexpected surprise.

The Belle Vue Place street name is a bit of a clue, but there’s a very slim chance that you’d accidentally stumble along here. I say this with some confidence given that I actually lived on this street in 2014 and had no idea it existed!

If we return to the Charles Booth map, where the red dot is now you can see a curving street called “Belle vue P”.

Built 1825-1830 and originally in a horseshoe shape, this terrace was built as housing on land owned by the brewery.

This is what you can find behind the door…

It’s closed off at one end, the far section of the terrace was replaced by brewery sheds, so is its own private street!

So there you go, a hidden street I’ve only found now – despite previously living around the corner for a year! Just proves that discovering London’s history is a never-ending journey. 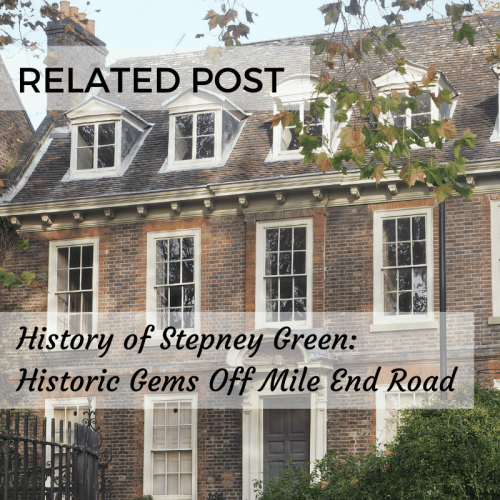