in City of London, London, Look Up London, Things to do in London
4 Comments

Right on the edge of the City of London, just a short walk from noisy Aldersgate Street you can walk through Charterhouse Square and encounter an extraordinarily historic place. 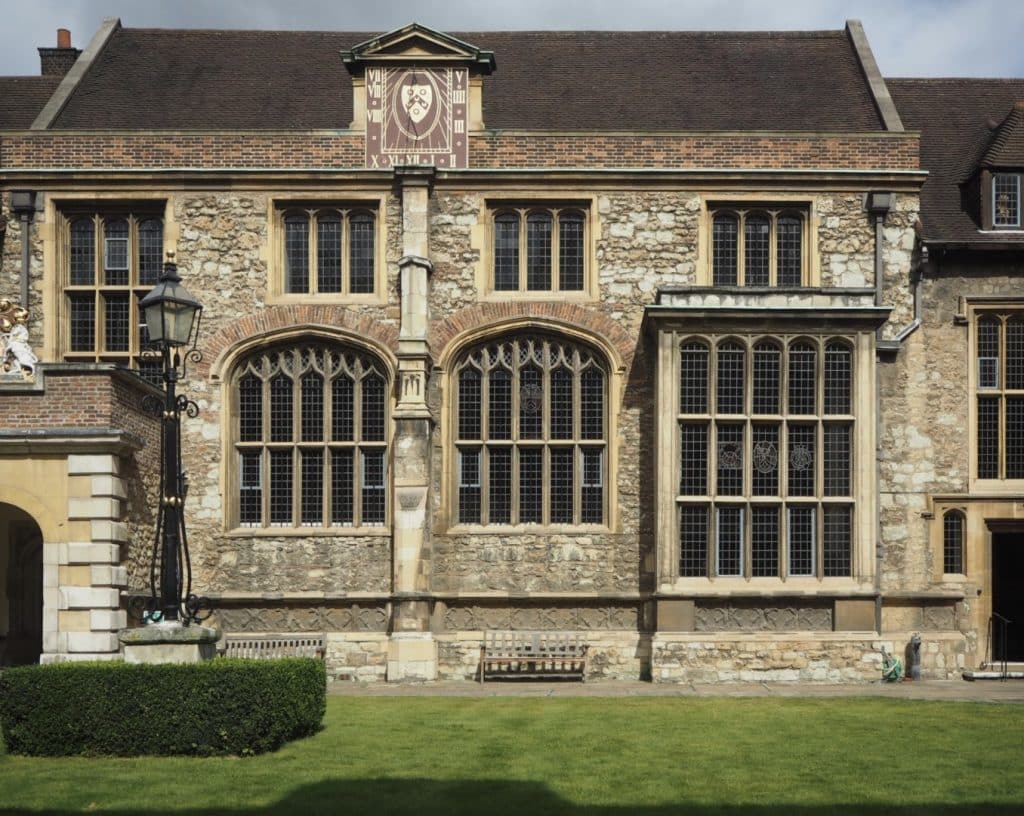 “In the nation’s history since 1348”, Charterhouse opened to visitors last year and allows Londoners the chance to explore over 600 years of history. You can visit the chapel and museum for free but I was recently invited to join one of their tours.

The Charterhouse has taken on many identities through the years and so it’s easiest to talk about its history through the 4 stages of its evolution; plague pit, monastery, Tudor manor, school and almshouse.

Charterhouse Square seems peaceful enough, but the large green space is hiding a gruesome secret. It became the final resting place for thousands of people who died from The Black Death, a ‘Great Pestilence’ which swept through Europe between 1347 and 1351.

With the existing London cemeteries unable to cope with the dead, Sir Walter Manny, knight and friend of King Edward III, rented a section of land – outside the City of London – as a burial site for plague deaths. Our guide said there could be as many as 10,000 bodies under the square.

During excavations in 2013, the Crossrail team found 25 skeletons in a small corner of Charterhouse Square. They were surrounded by 14th century pottery and reports confirmed the presence of the bacteria Yersina Pestis, associated with plague.

Inside the Charterhouse Museum there’s a skeleton of a Black Death victim. 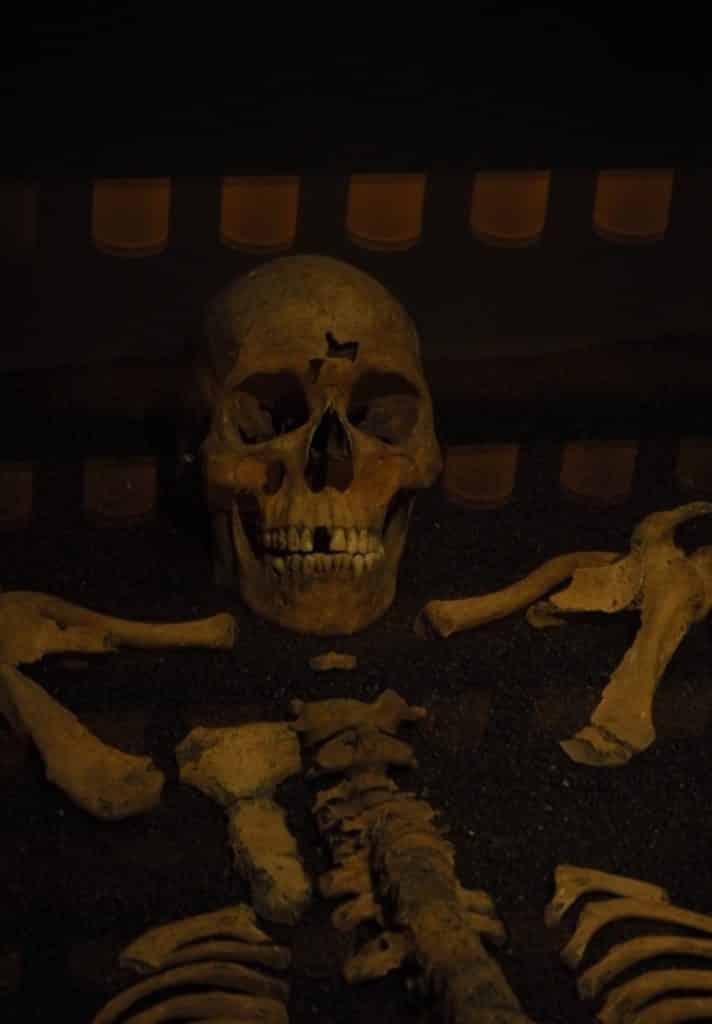 Aged between 18 and 25, the unknown man is thought to have moved to London from central or eastern England at the age of 5. Although they look well-preserved, his teeth suggest severe dental diseases and his bones contained the Black Death bacteria.

In 1371 as a final act of piety, Sir Walter Manny left a portion of his land for the founding of a monastery. He instructed that ‘my body is to be buried in the Charterhouse…which house I founded.’

The white marble tomb in the garden shows the burial place of Walter Manny. It was lost for a few hundred years as the chapel had been rebuilt. They finally found the grave in the 1950s and the marble slab is a modern addition.

Between 1371 and 1538, Charterhouse was a Carthusian monastery. Founded 1084 by Saint Bruno in the Chartreuse Mountains, the name Charterhouse is derived from that location. 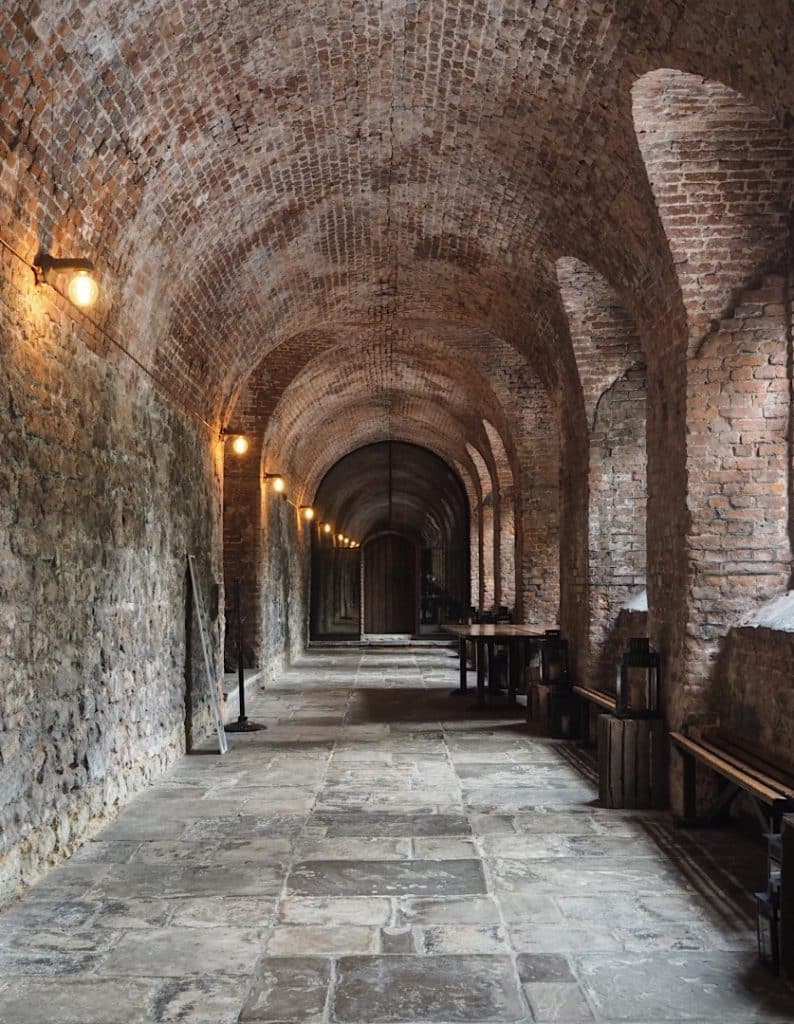 Carthusian monks were seriously disciplined and austere. They lived in silence and solitude except on Sundays where they could talk (about prayers) with their fellow brothers.

They slept in cells like the one below and weren’t meant to be disturbed. There’s a small hatch on the outside for food deliveries, kind of like room service but with a far less comfy bed! 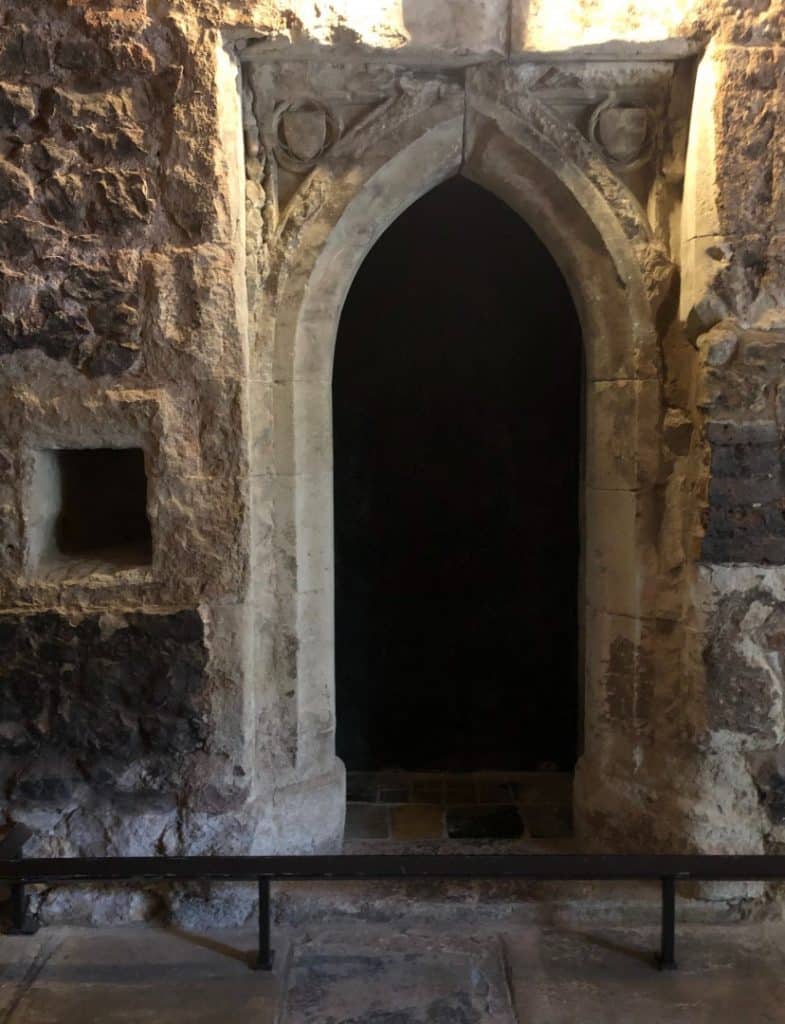 The Carthusian monks were highly respected, principled and influential. For those reasons they were in very deep trouble in the 1530s.

It all goes wrong…

King Henry VIII was desperate for a male heir, under the impression his current wife Catherine of Aragon couldn’t provide one, he set about divorcing her and marrying Anne Boleyn. One issue though. The Pope refused to grant him a divorce.

Furious that his authority as King was being questioned, Henry set about sorting things out himself, first with the Act of Succession (ensuring his daughter with Catherine of Aragon was disinherited) then with the Act of Supremacy (declaring Henry, not the Pope, was head of the church in England).

Seeking to quash any resistance, royal agents visited the Charterhouse on two occasions. The head prior John Haughton agreed that the monks could live with the first act, but the second was too big an ask. They refused to sign Henry’s Oath of Supremacy.

This decision by Houghton as a death sentence. He and two other Carthusians were taken to the Tower of London, then to Tyburn execution site (today’s Marble Arch) as were hanged, drawn and quartered. 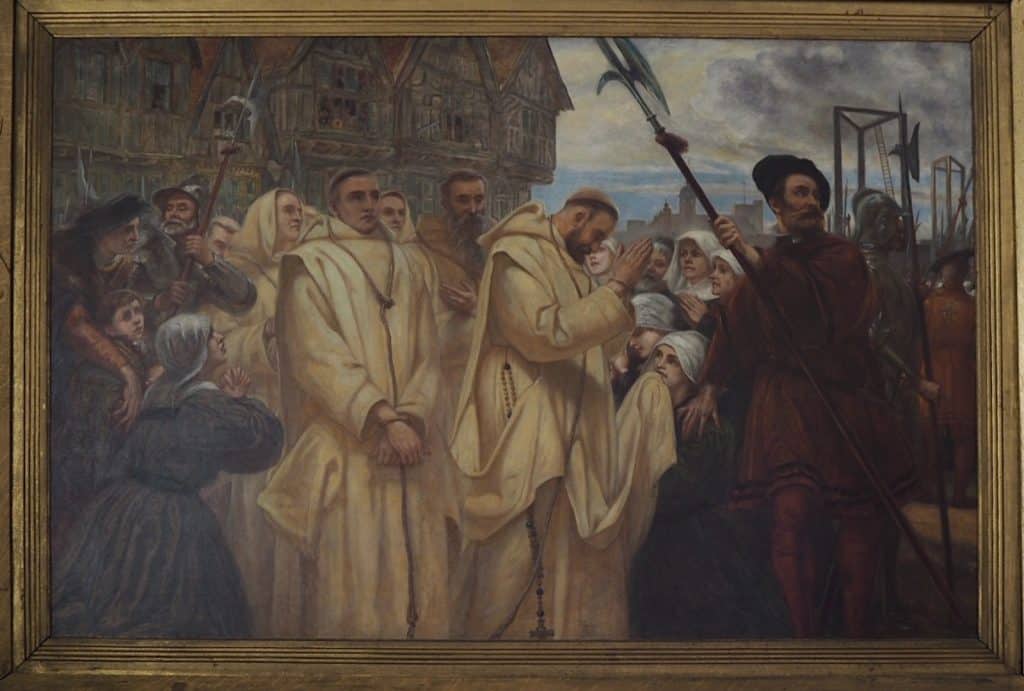 As a final gruesome message to the rest of the monks John Houghton severed hand was sent back to Charterhouse, nailed to this door (below) as a warning to comply. 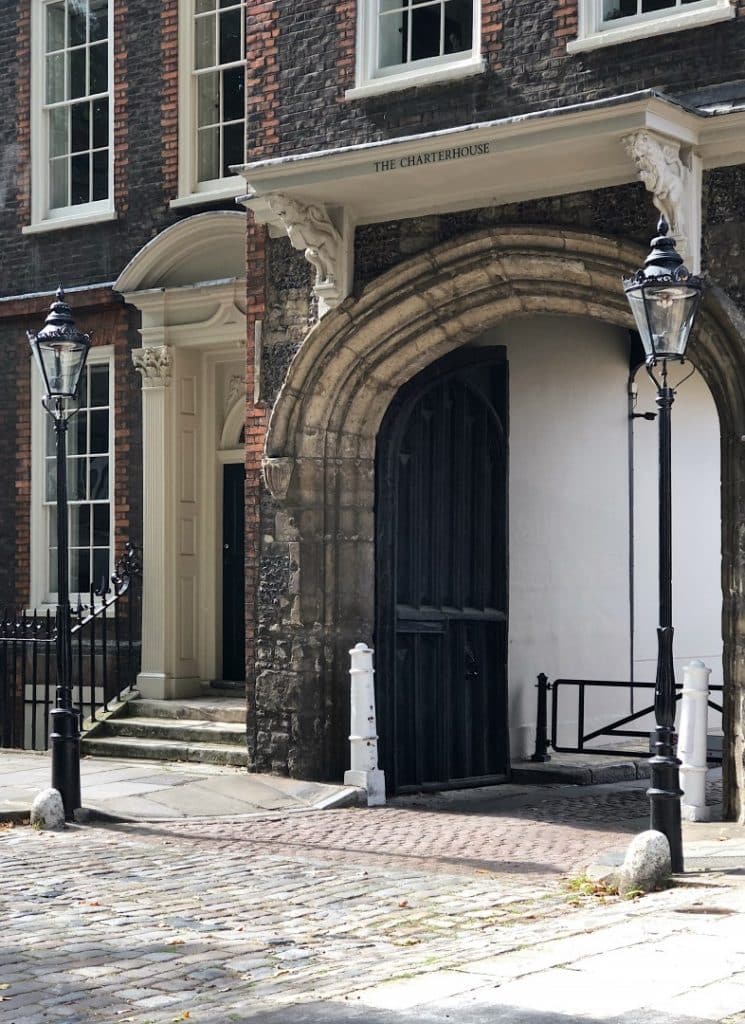 Incredibly, the majority of monks still refused to sign Henry’s oath and in three successive waves all that did not sign were executed, the last group were sent to Newgate Prison on 29 May 1537 and starved to death.

If you’re still with me, you’ll probably be relieved to know that the story gets a bit more happy and far less gruesome from here…

In the politically tumultuous times following the dissolution of Catholic monasteries across England, Charterhouse was passed around various powerful Tudors.

The former religious house was made into a comfortable mansion, fancy enough even for Queen Elizabeth I who owned Charterhouse between 1589-1601.

And every grand Tudor building had to have minstrel gallery. This was for musicians to entertain guests during dinner. 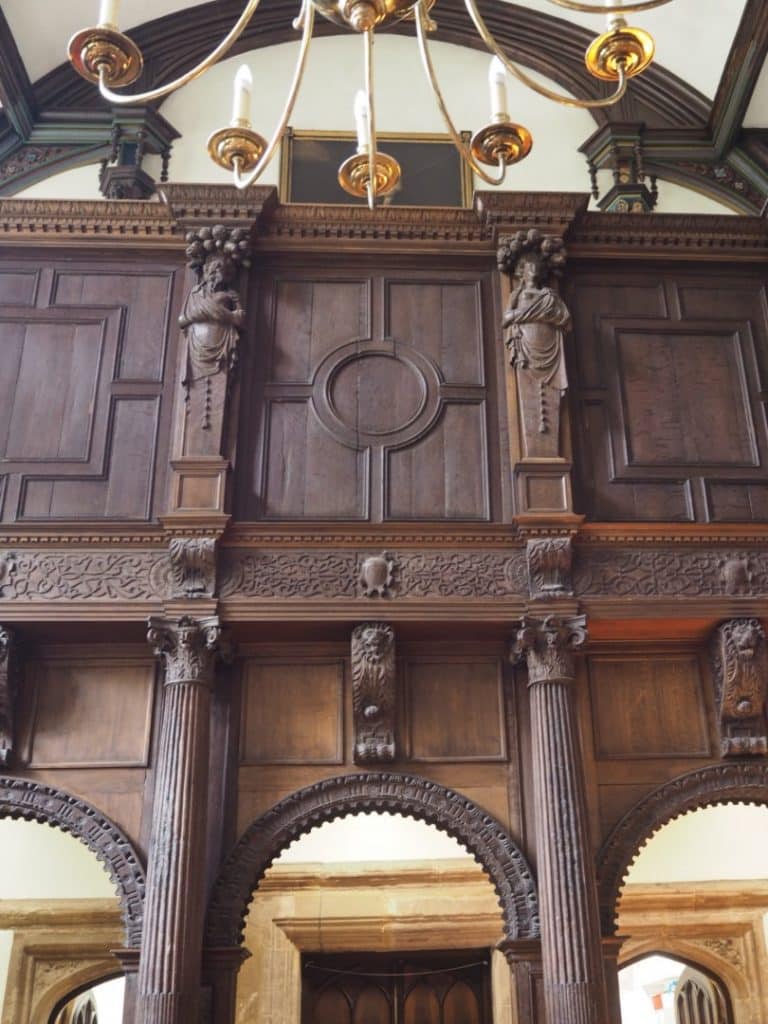 Another stunning Tudor room is the Great Chamber. 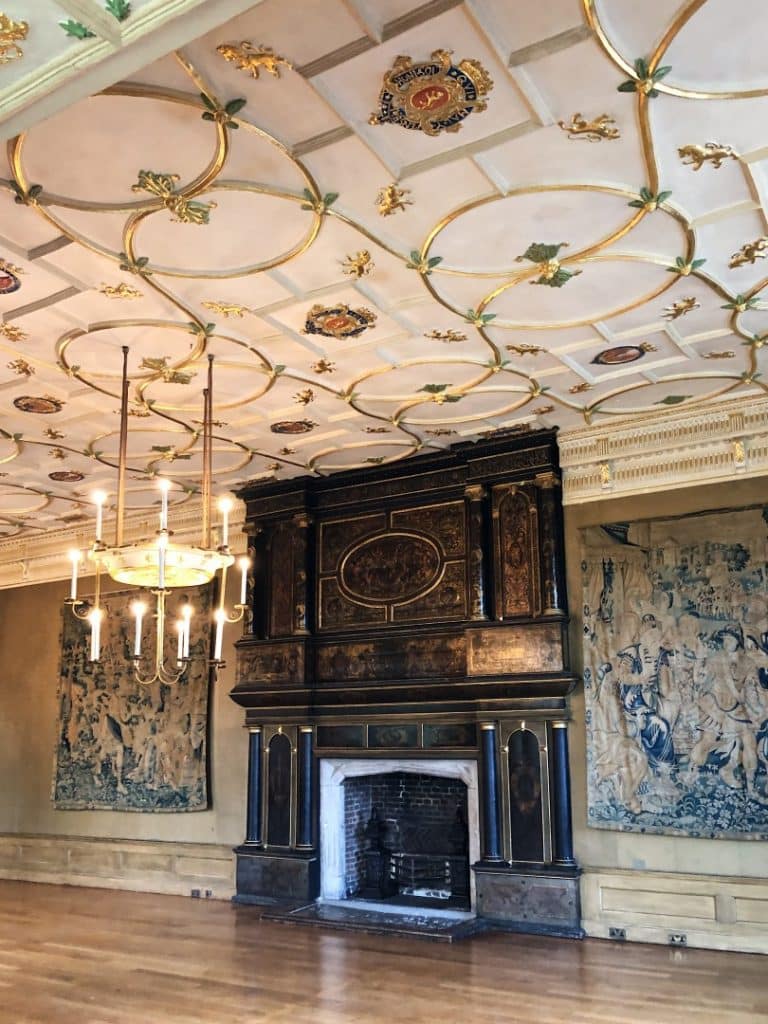 It was here that the young Queen Elizabeth I prepared for her coronation ceremony and later was where King James I knighted some of his favourites. 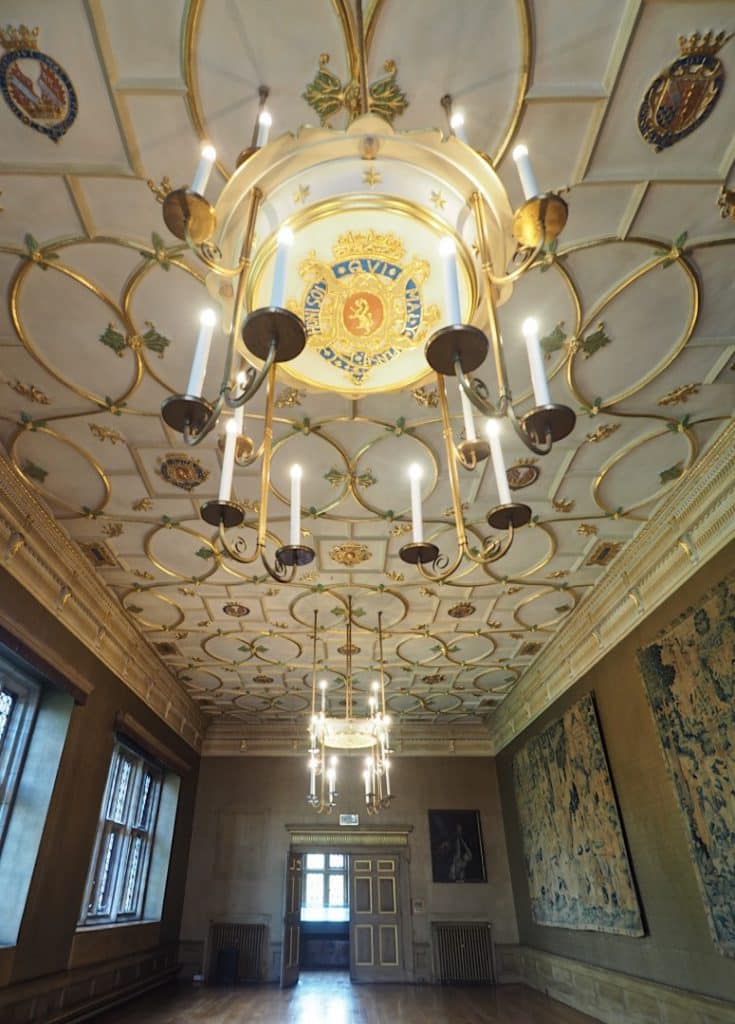 The last private owner of Charterhouse was Thomas Sutton, a well-connected businessman who was appointed as Master of the Ordinances in the North. Sounds very Game of Thrones, but this just meant he was in charge of military supplies and fortifications of Northern England. Later in life he became a fabulously wealthy moneylender. 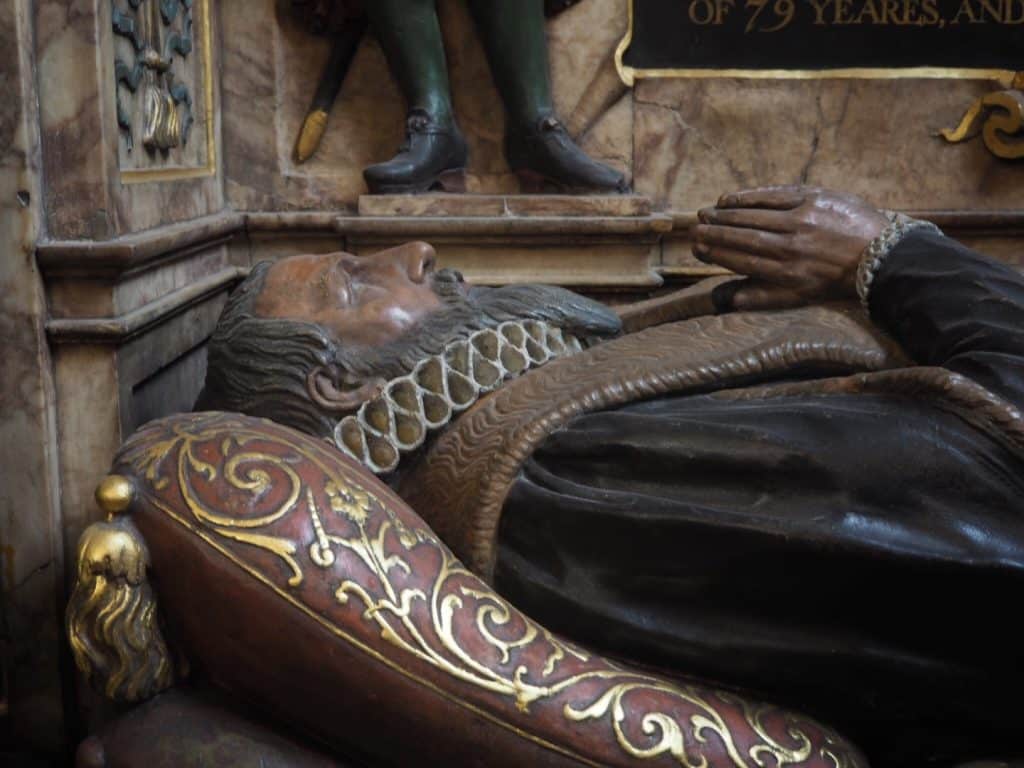 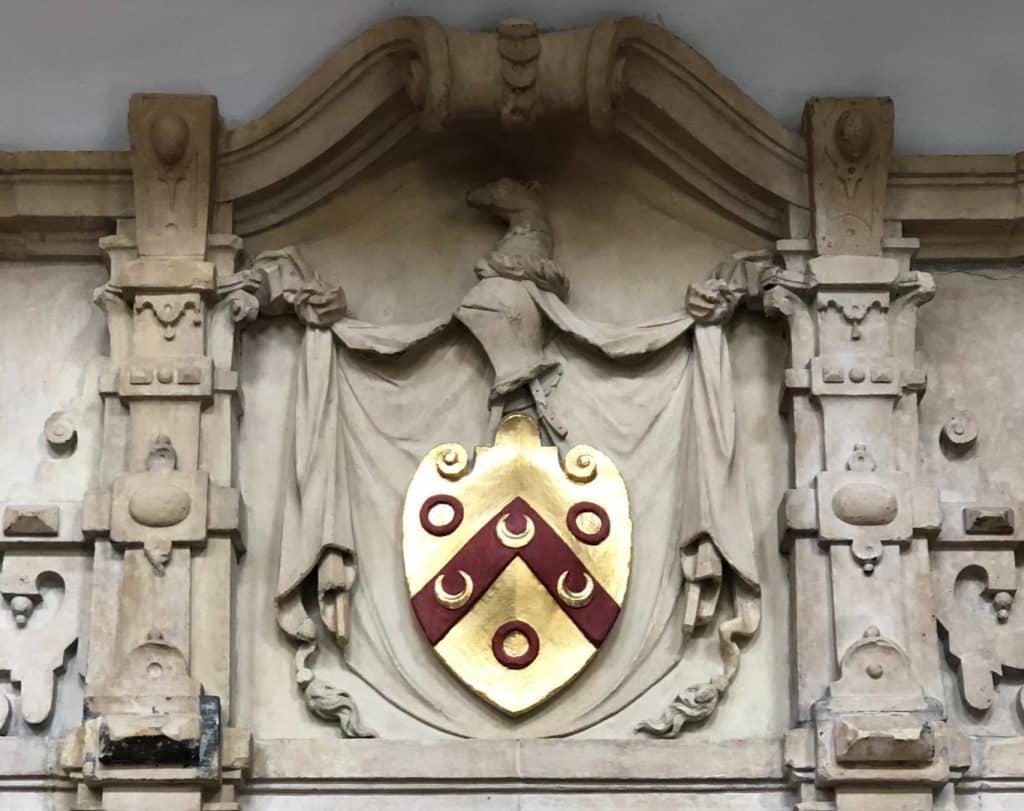 His heraldic symbols (the hunting dog and shield) can be spotted all over Charterhouse.

There’s also a nod to his arms dealing past on the Great Hall fireplace. 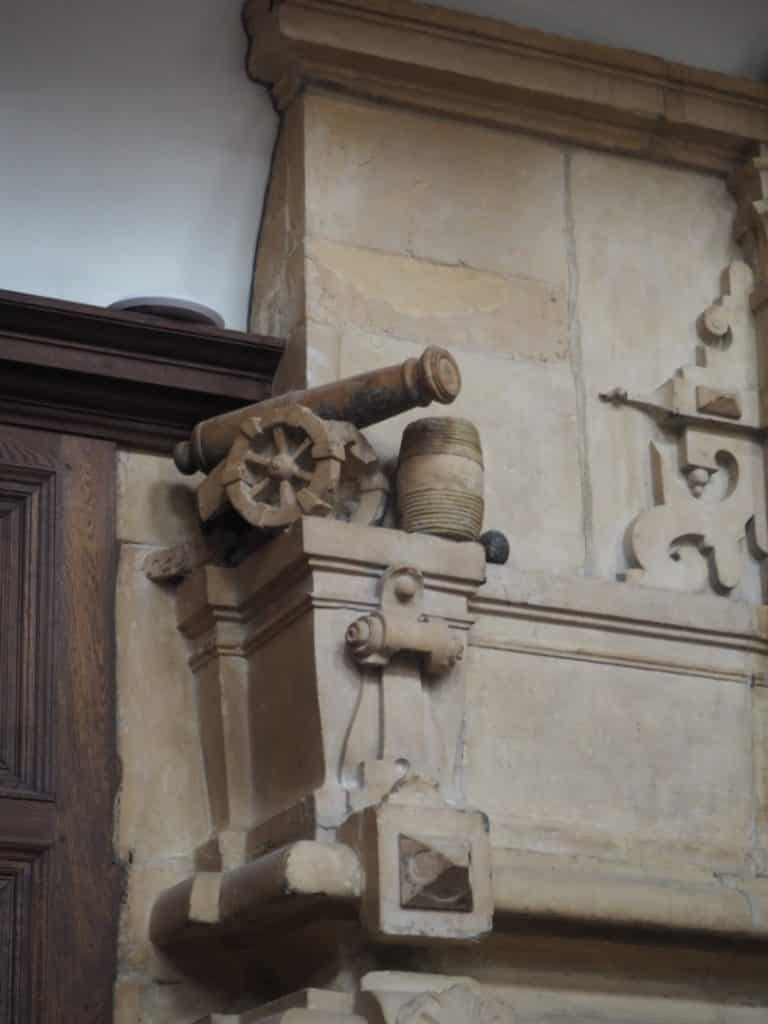 He’s buried in the chapel, with a splendid 1614 monument by the leading craftsmen of the time; Nicholas Jensen and Edmund Kingsman as well as sculptural work by Nicholas Stone. 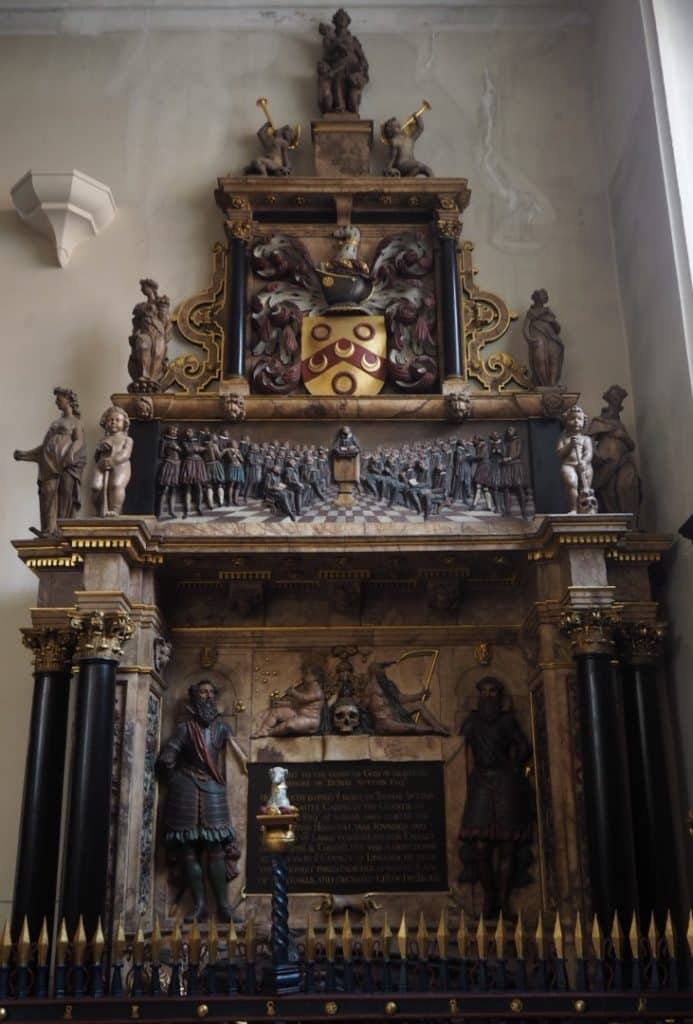 When Thomas Sutton died in 1611 his will left enough money for the founding of Charterhouse Almshouse and School. The school, still called Charterhouse, moved from its central London site to Godalming in Surrey in 1872.

With the almshouse, Sutton instructed that 80 men (known as brothers from its monastic heritage) should be cared for at the Charterhouse. He intended they should be  ‘either decrepit or old captaynes either at sea or at land, maimed or disabled soldiers, merchants fallen on hard times, those ruined by shipwreck of other calamity’.

Today to be a brother you need to be over 60, single, in financial need but in good health and deemed of good character. You may have spotted that being a man isn’t a pre-requisite. Among the 43 occupants there are 3 female brothers.

They dine in the (refurbished) Tudor Great Hall; 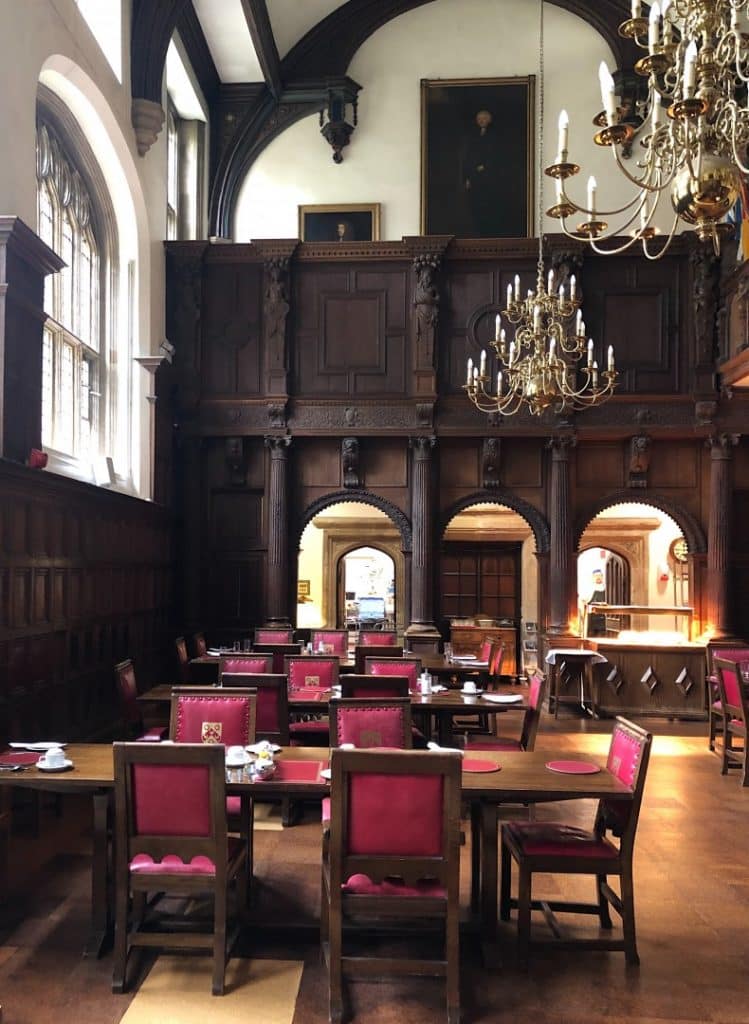 …and live in the historic surroundings of the Charterhouse. 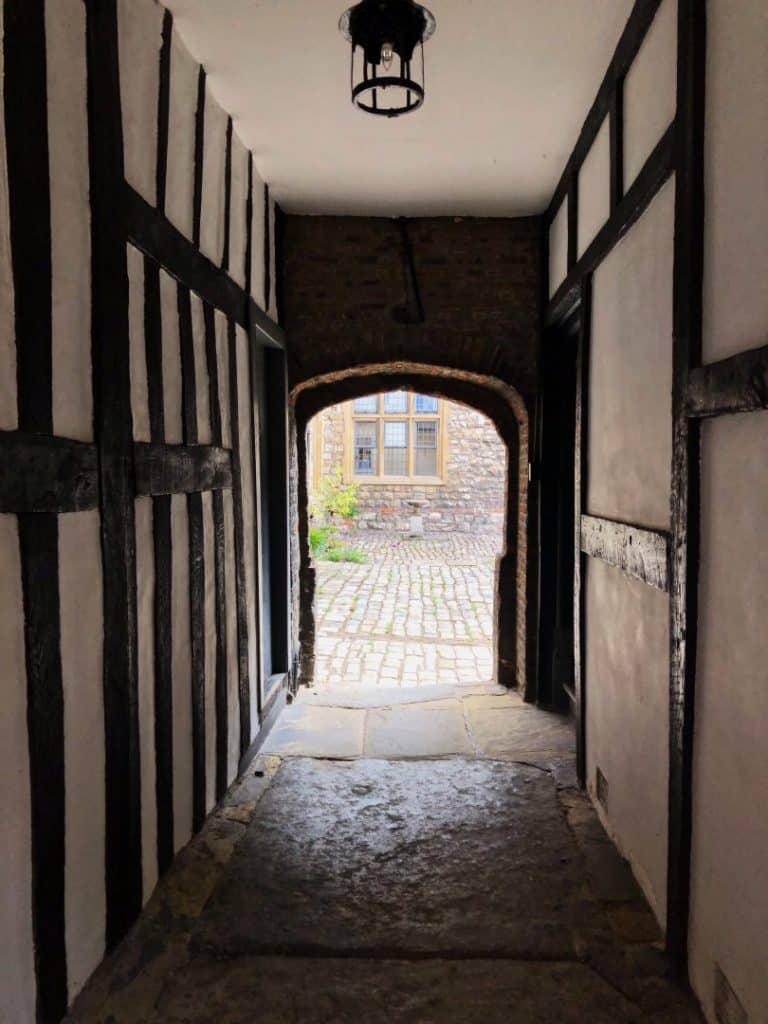 Since 1611 the Charterhouse has been refurbished, damaged and rebuilt in parts and one last little detail I wanted to share was a door.

The building suffered bad bomb damage during WWII (as a reminder, it’s right by the Barbican!) but thankfully the 16th century chapel was saved.

Connecting the chapel to the main building is the chapel cloister, a gorgeous, light-filled corridor with a curious relic at the end. 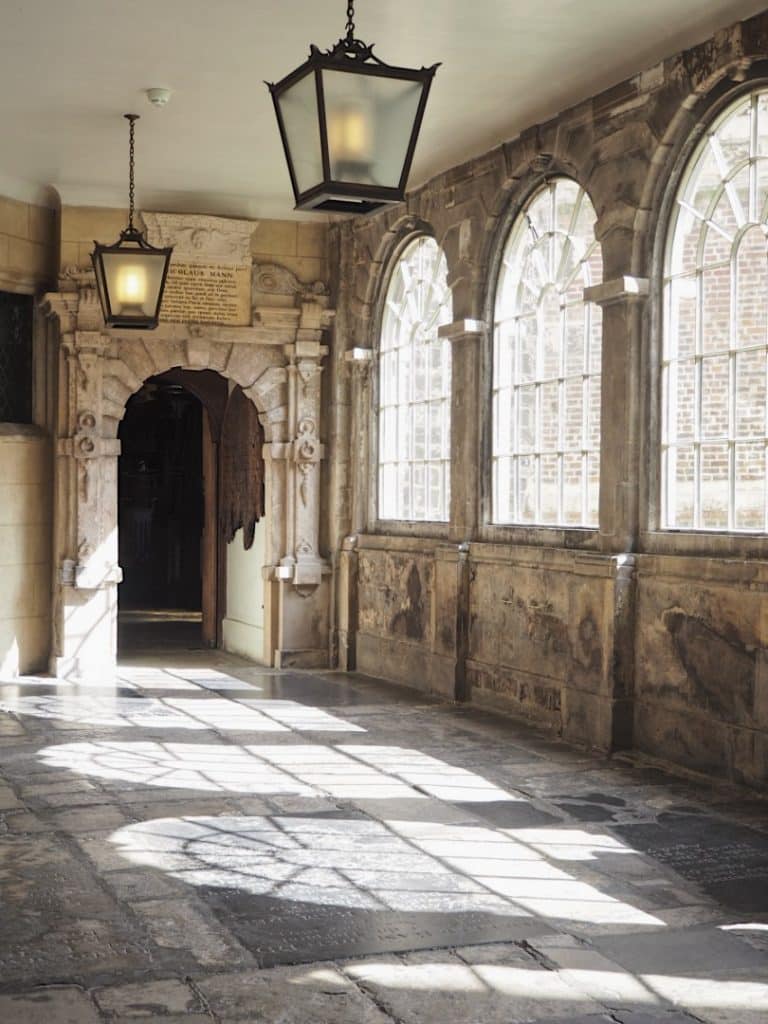 Before entering the chapel on your right is the charred remains of the chapel door. It was burnt in a fire started by incendiary bombs during an air raid. 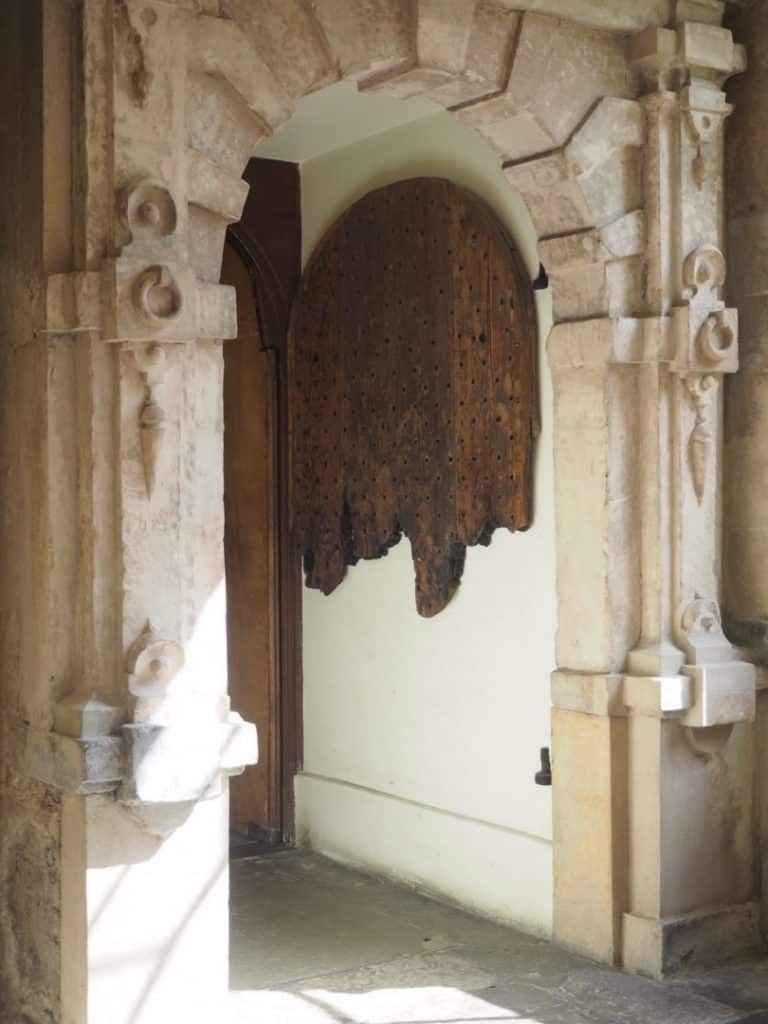 Thankfully this door stopped the fire spreading into the chapel and we can still enter and enjoy the space today! 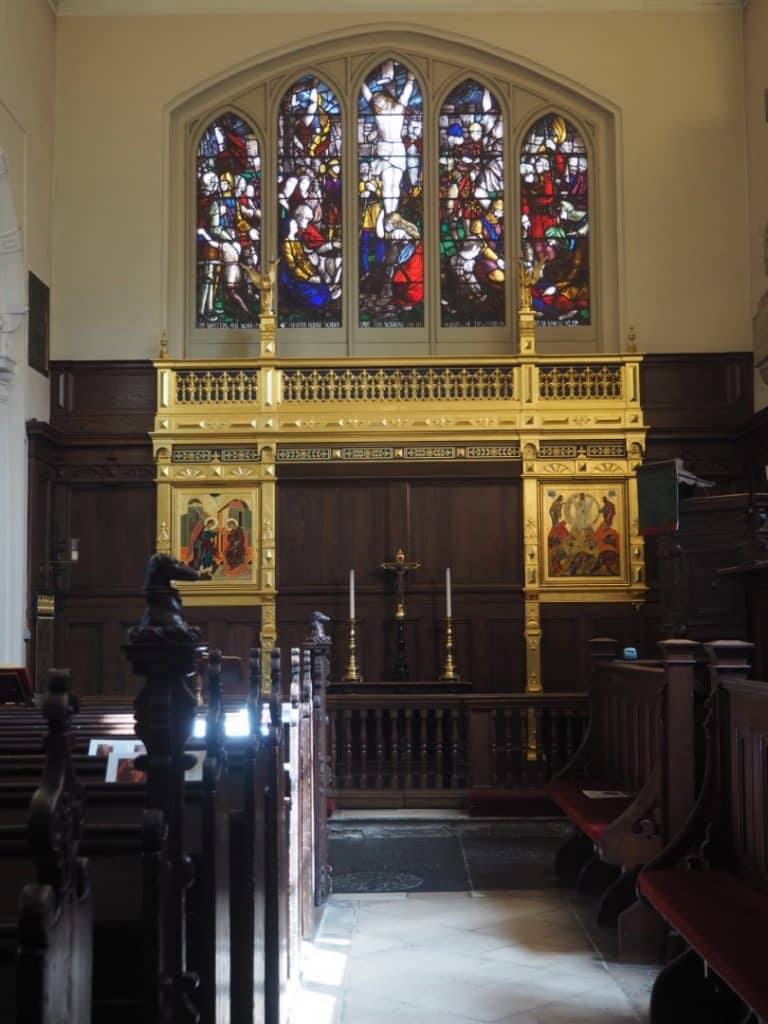 When The Charterhouse is open, you can visit the chapel and museum for free. However to get a better understanding of this epic building there are tours available, priced around £15. You can also choose specific architecture or garden tours as well as tours with the resident brothers too. Find out more about them here.

The Charterhouse is one of the places we encounter on the ‘Guts and Glory’ Smithfield and Clerkenwell walking tour. Find out more here.