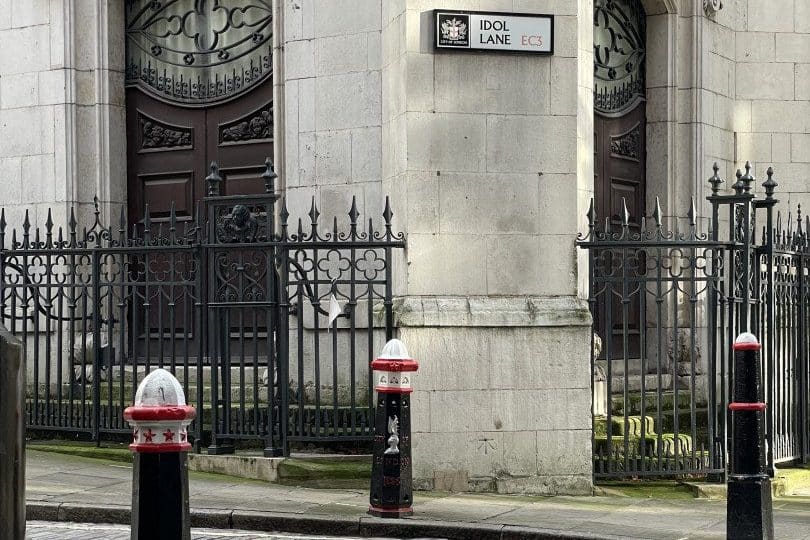 in City of London, Hidden Gems, Look Up London
5 Comments

Along Idol Lane – right by the gorgeous St Dunstan-in-the-East Garden – you can find an extravagant bollard.

Not only is it decorated with the City of London crest and painted red, black, white.

But if you look closely, it’s hollow.

There is a date at the bottom declaring it was erected 1886 but it’s not a lot to go on.

Given these holes, I had assumed it connected to an underground sewer. Or maybe was linked to some other ventilation for the nearby Billingsgate Fish Market.

However, I found the true answer in the brilliant book, Bollardology by Cathy Ross.

Her sleuthing revealed that in October 1886 the City of London Corporation unveiled a new public urinal at the corner of Gracechurch Street and Eastcheap.

Here’s a view of the light blue railings surrounding the former public toilets today, looking up towards Gracechurch Street.

It was hard to find any 19th century images of the public toilet, but you can see the urinal (circled in yellow) on the 1893-96 OS map below.

To further visualise it, there’s a description detailed in Bollardology. It comes from William Haywood, an Engineer and Surveyor who was the City of London’s Commissioner of Sewers (think of him as the Joseph Bazalgette, specifically for the City).

In his report in 1887 he notes there is a ‘large five light lamp standard placed at the centre of the refuge, the base of which forms a ventilating shaft.. The other lamp standards and dwarf posts [bollards] placed hear the footway curbs are so designed to assist the ventilation.’

As mentioned, although I couldn’t find any 19th century images of the five light lamp standard, I imagine it was similar to the remaining one by the public toilets outside the Royal Courts of Justice.

Happily, you can see an image of the Gracechurch Street toilets from 1969 where (if you zoom in) you can spot the identical bollards to our Idol Lane one.

Today only the base of the original large lamp remains and it’s still an attractive bit of street furniture, now painted black and cream.

The public toilets are no longer in use but there’s a tell-tale miniature stink pipe which would’ve also help ventilate unpleasant smells.

The Idol Lane bollard is a 5 minute walk from the public toilets. However the date (and reason) it was moved is still a bit of a mystery. What do you think happened?

If you’re interested in Cathy Ross’ Bollardology (I highly recommend it!) You can buy a copy here.

The City: Power and Sacrifice Walk

Unique within London, walk the hidden alleyways and little corners of the Square Mile. Discover the fascinating history of the City of London, learning the meaning behind its symbols and secrets on my walking tour! See available dates below: