In Pictures: Down Street Station Tour

in London, London Underground, Quirky Museums, Things to do in London
2 Comments

It doesn’t seem that appealing an offer. To spend 90 minutes in damp, filthy and cramped tunnels which are sporadically thrown into total darkness. You may be surprised, therefore, to learn that Hidden London’s Disused Tube Station Tours sell out within minutes.

After managing to navigate London Transport Museum’s online queue and buy a ticket (for the hefty sum of £75) back in April, last week I joined a small group of 11 others to delve 22 metres below Piccadilly.

We descend the 123 steps, the original route for commuters.

We started by talking about Leslie Green, the architect who designed over 50 stations across London in the early 1900s, all of which have the uniform ox blood glazed tiles and a steel frame roof to support buildings on top, meaning railways could charge rent. Bonus. 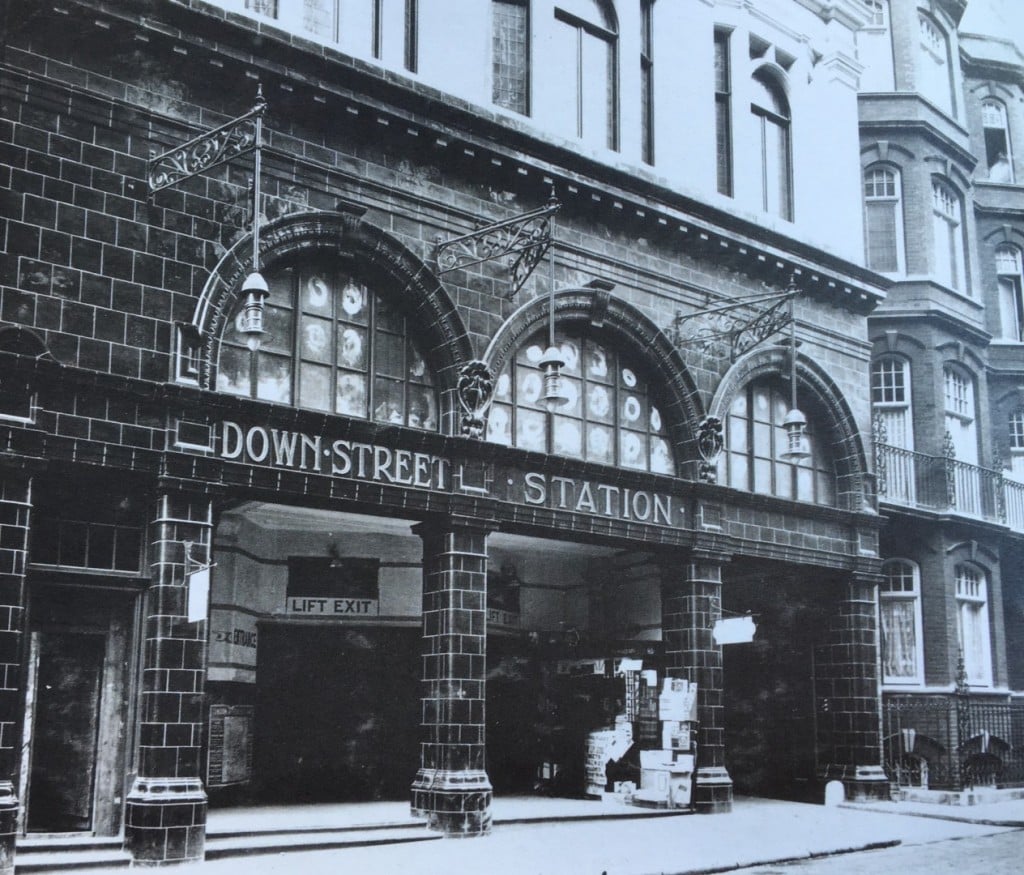 Then moved on to the specific Down Street Station design, which would end up being it’s downfall.

Looking at the station plan, you can spot two long tunnels which make their way under the buys Piccadilly to join the platforms and train lines where the current Piccadilly line runs. 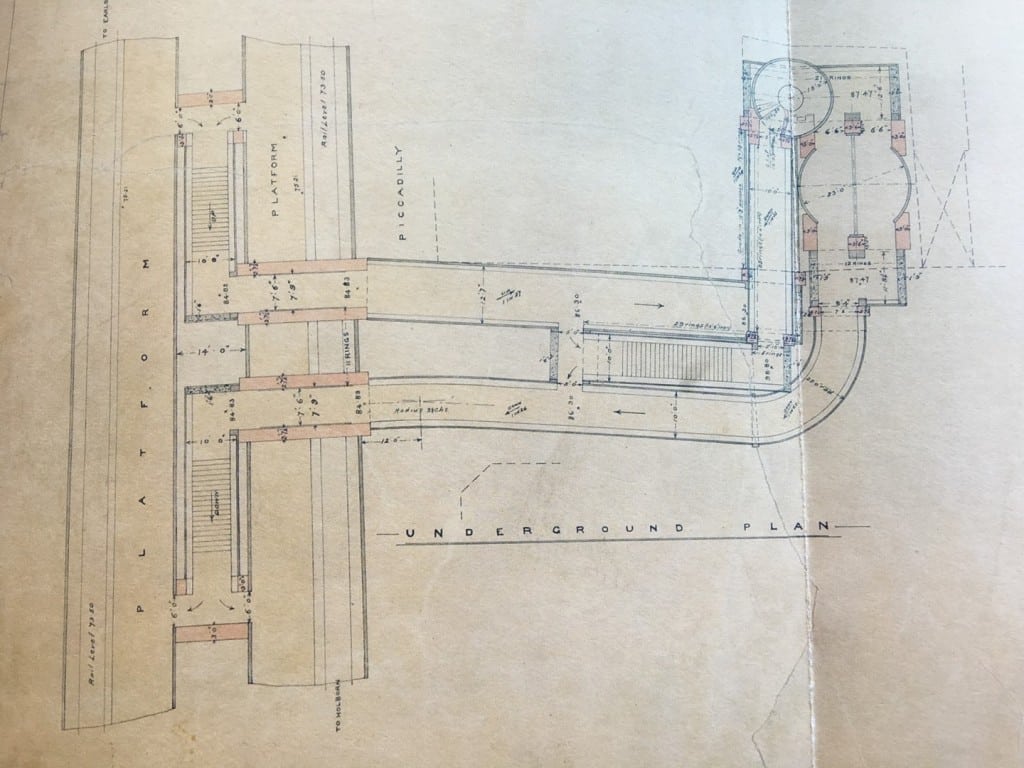 These were a safety issue; too long a walk in an emergency and a convenience issue; commuters don’t want a long walk from station to platform. Not that that’s stopped some stations… (I’m looking at you Bank).

It also suffered from lack of footfall, Mayfair residents weren’t known for their love of public transport, plus Hyde Park Corner and Green Park were nearby and had escalators.

So when it closed in 1932, no one expected it would have a vital wartime use…

Ironically it was the long tunnels that gave Down Street a renaissance. Bad for London commuters, but perfect for office space… 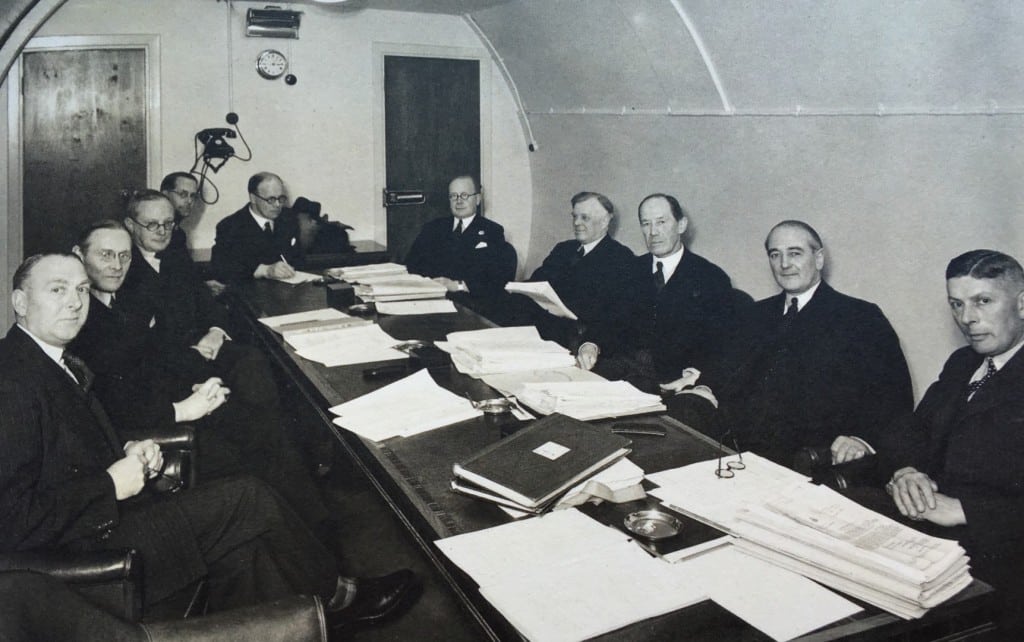 The Railway Executive Committee (REC) had taken over the various different railway companies during the Second World War, charged with the vital job of ensuring tube trains and railways kept carrying passengers (and ammunition) across London and the Nation.

With fears that their current Westminster HQ wouldn’t survive an aerial attack, it was Gerald J Cole Deacon, REC Secretary, that remembered the abandoned tunnels of Down Street and on the day WWII was declared, they moved in.

*The REC persuaded a disgruntled Churchill to use Down Street as a shelter. Winston though it was a show of weakness to be seen hiding but eventually agreed, spending his first night in Deacon’s office in 1940 and affectionately calling Down Street ‘The Burrow’. Others referred to it as ‘The Dungeon’…

The REC had an incredibly important job, scheduling all trains and reacting to up-to-the-minute information on air raids and other attacks.

Though the committee only met daily and later on weekly, the tunnels still housed 40 staff including typists, phone operators and schedulers who worked 24 hours a day,  spending up to two weeks solidly underground

Back to the tour…

Despite being gutted after the war, evidence can be seen in the tunnels of Down Street.

As we descend we spot hand painted way finding signs as well as evidence of canary yellow paint, which we’re told was installed to ‘brighten up’ the place…

Another interesting feature is the maroon tiles; each Leslie Green station had an individual colour scheme to help make it unique, even if you were illiterate.

As well as painted evidence, there were helpful images mounted on the walls;

Our (excellent) guides Glen and Gale use visuals and remaining evidence to help explain what we’re seeing.

But all that’s left of the committee rom (the black and white picture above) is the table’s outline on the floor;

My particular favourite bit of office evidence is this left over ramp;

This was where the typist’s room was. Now normally tube station tunnels slope gradually towards platform level, but this ramp was installed to level the office floor (no one wants their type writer/pens/cup of tea rolling onto the floor!)

We’re fully warned at the start how filthy certain parts of the tunnels are, and because of the proximity to live tube lines, there are moment of total darkness.

It’s hard for photos to capture the atmosphere of the place, especially the moments when you are plunged into total darkness as a Piccadilly Line tube rushes past. You catch a glimpse of other travellers, blissfully unaware of being watched from the black, abandoned tunnels.

Some of the tunnels have no light sources, we’re armed with torches to light our way

In an attempt to convey the experience you can look at the picture above and listen to the live recording I made of the trains rattling past;

As I mentioned, theses places were used 24 hours a day for 2 weeks at a time, so there’s evidence of the kitchens and bathrooms left over;

Not everyone was slumming it though…

Mr Deacon, the secretary we met before, complained of a lack of ashtrays and comfortable smoking chairs and the head chefs for C-level staff were allowed sugar, cheeses and ham – unheard of during WWII rationing – not to mention the caviar and Perrier Jouet champagne!

Today, as well as tours, the tunnels have a practical use for engineers, providing access to tunnels. Evidence of this is seen in the modern way finding signs below;

You might just be able to make out the more faded, original lettering for Hammersmith behind the ladder.

The best way to get tickets is to sign up for the London Transport Museum Newsletter here. Then you’ll be the first to know about tours going on sale.

There’s an option to sign up for priority membership too for a cost. More info here.