7 Things You’ll Learn From ‘Fire! Fire!’ at the Museum of London

in London, Quirky Museums, Things to do in London
0 Comments

350 years ago on 2 September, London was ravaged by a fire that burnt for 5 days, making 100,000 Londoners homeless and causing £10 million worth of damage. We all know that it started in a Pudding Lane bakery, but I made some startling discoveries at the Museum of London’s new exhibition; Fire! Fire! 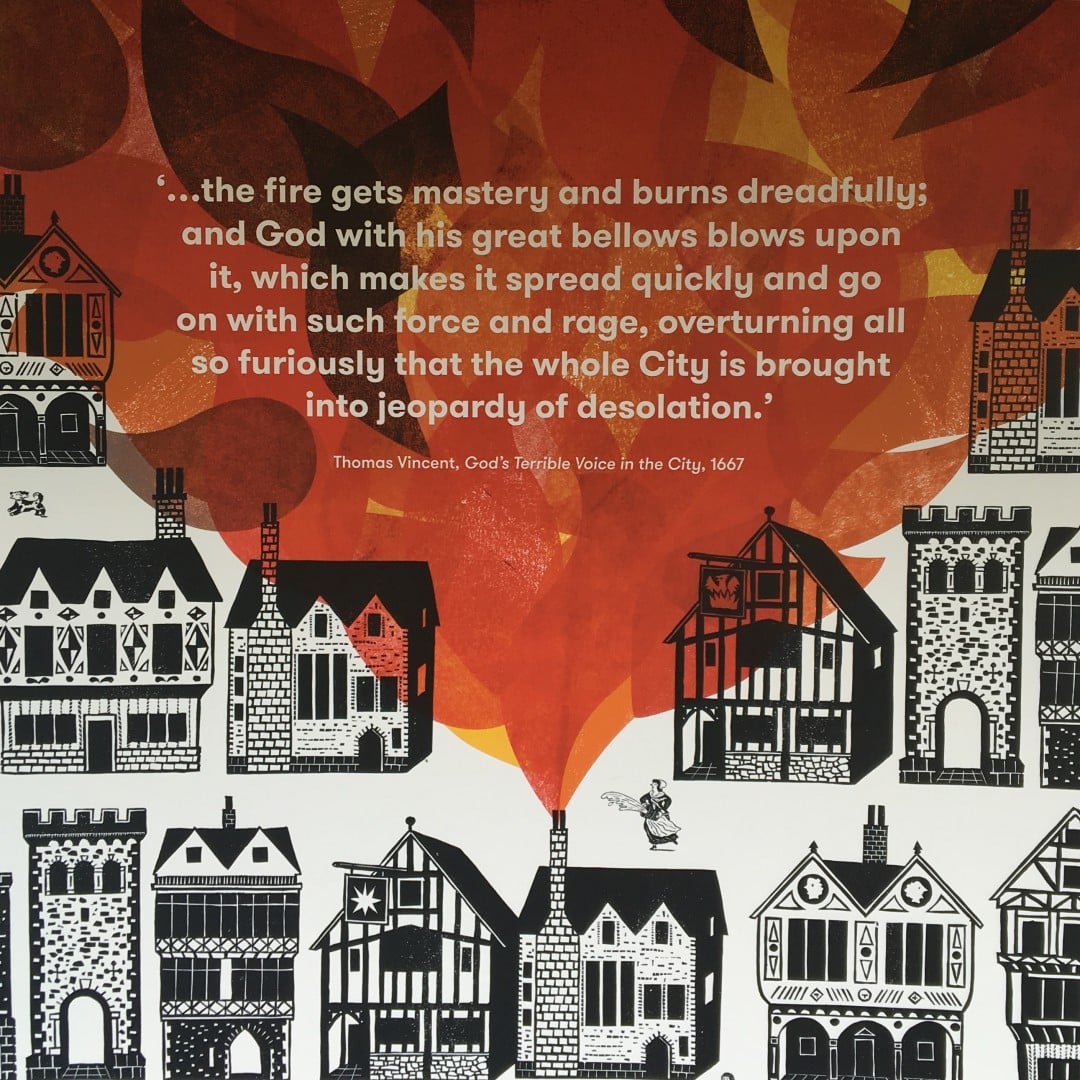 Samuel Pepys, the 17th Century diarist and London’s original man-about-town (read more about him here) seemed to always be first on the scene. After shoo-ing away fretful servants who first warned him about a fire; “I thought it far enough off; and so went to bed again and to sleep.”

When he woke up at seven the severity of the situation was apparent and Pepys scurried to the palace;

“I to White Hall … and there up to the Kings closett in the Chappell, where people come about me, and did give them an account dismayed them all, … and did tell the King and Duke of Yorke what I saw, and that unless his Majesty did command houses to be pulled down nothing could stop the fire.”

You can imagine how smug and important Pepys must’ve felt being, not only the first to inform the King, but to also give him advice on how to proceed! 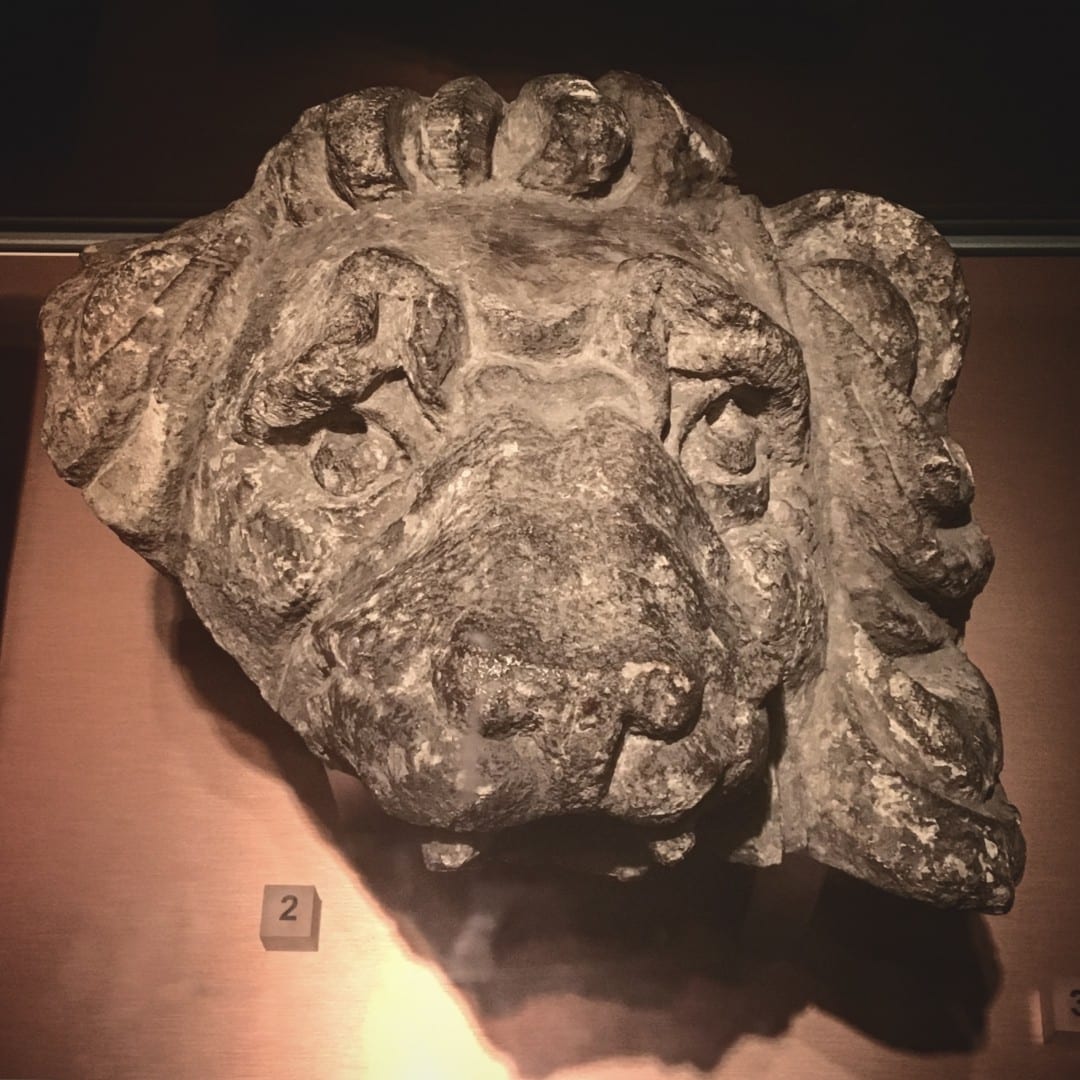 It was a tragic irony that St Paul’s Cathedral was in a state of disrepair at the time of the fire and therefore covered in wooden scaffolding. This meant that it suffered the same fate as other wooden buildings and Londoners watch in horror as their great symbol of the city burned.

“The stones of St Paul’s flew like grenados, the melting lead running down the streets in a  stream, and the very pavement glowing with fiery redness.”

Thatched roofs did not make the fire worse, in fact thatched roofs have been banned in the City of London for over 450 years after another terrible fire in 1212. 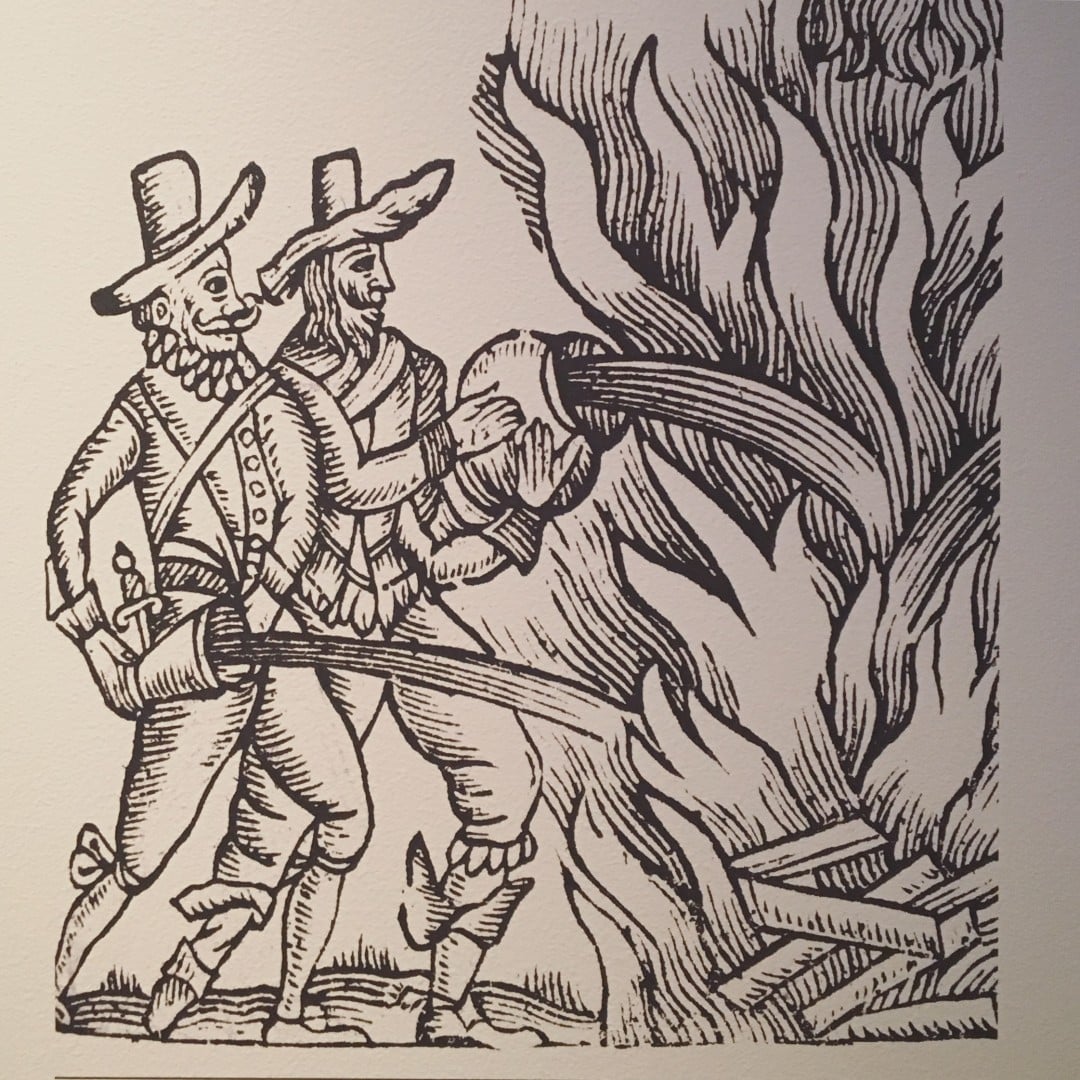 Detail of firefighters from Monarchy or no monarchy in England by William Lilly, 1651

Charles II and his brother James organised much of the firefighting (probably in an attempt to save public face after being branded cowards for fleeing London after the 1665 plague). They set up eight bases, each with 30 soldiers and 100 volunteers and began pouring water over fires and pulling down houses to prevent the fire from spreading.

The fire did not ‘stop’ the great plague, it was mainly over by the Autumn of 1666. The map below also shows that many of the places devastated by the plague were left untouched.

London, accustomed to rumours of religious terrorist plots at the time, were quick to blame the Catholics for starting the fire.

Book were published stoking these false – ahem, fires – including one blaming Jesuits below, where the Pope can be seen pumping the bellows to increase the flames across London. 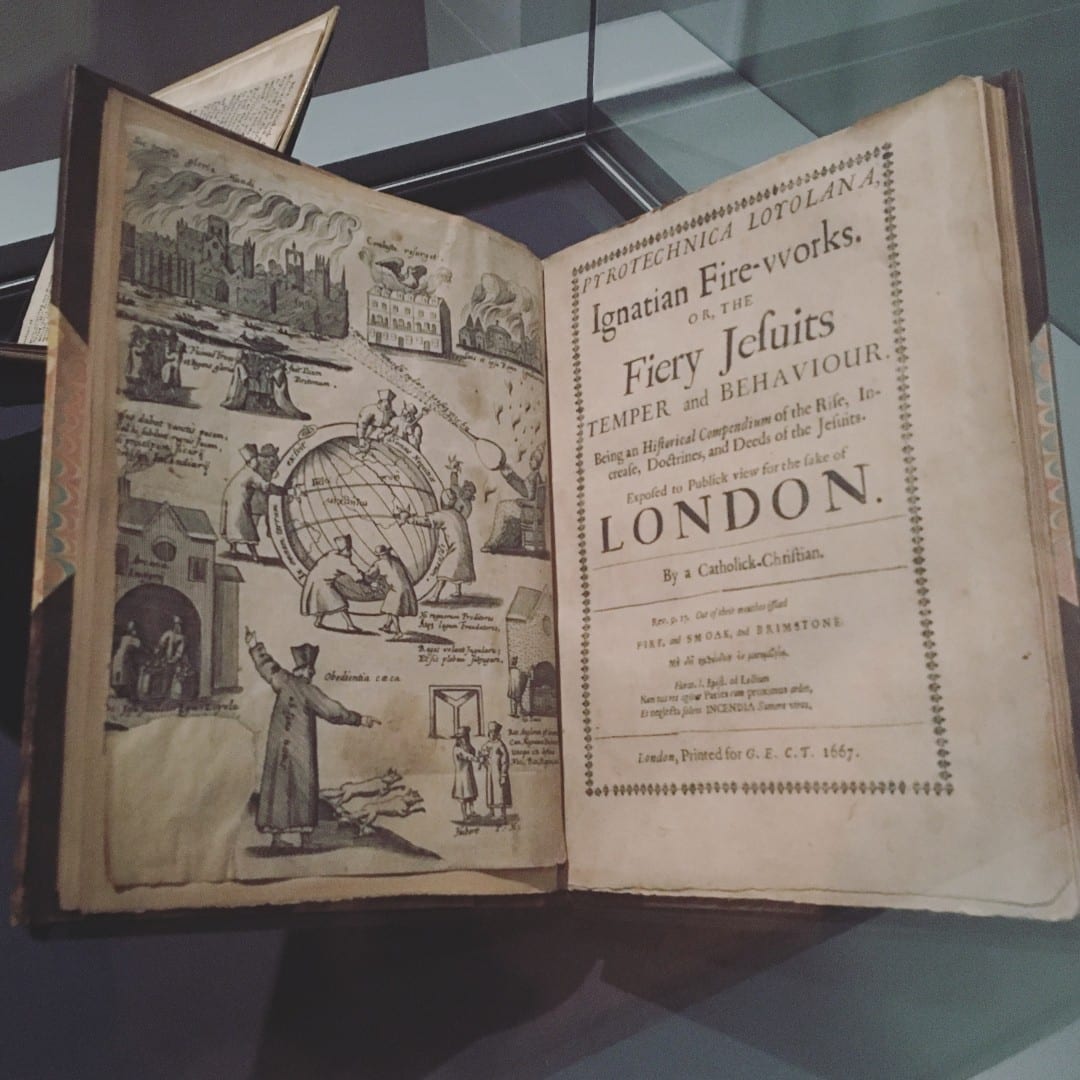 Curiously a man called Robert Hubert, a French Watchmaker, claimed to have started the fire in Whitehall then changed his story to Pudding Lane. Judges at his trial doubted his sanity and whether there was any truth to his story, but he was still hanged on 27 October 1666.

The plaque below shows Hubert as well as Catholic plotters to be responsible for the fire. 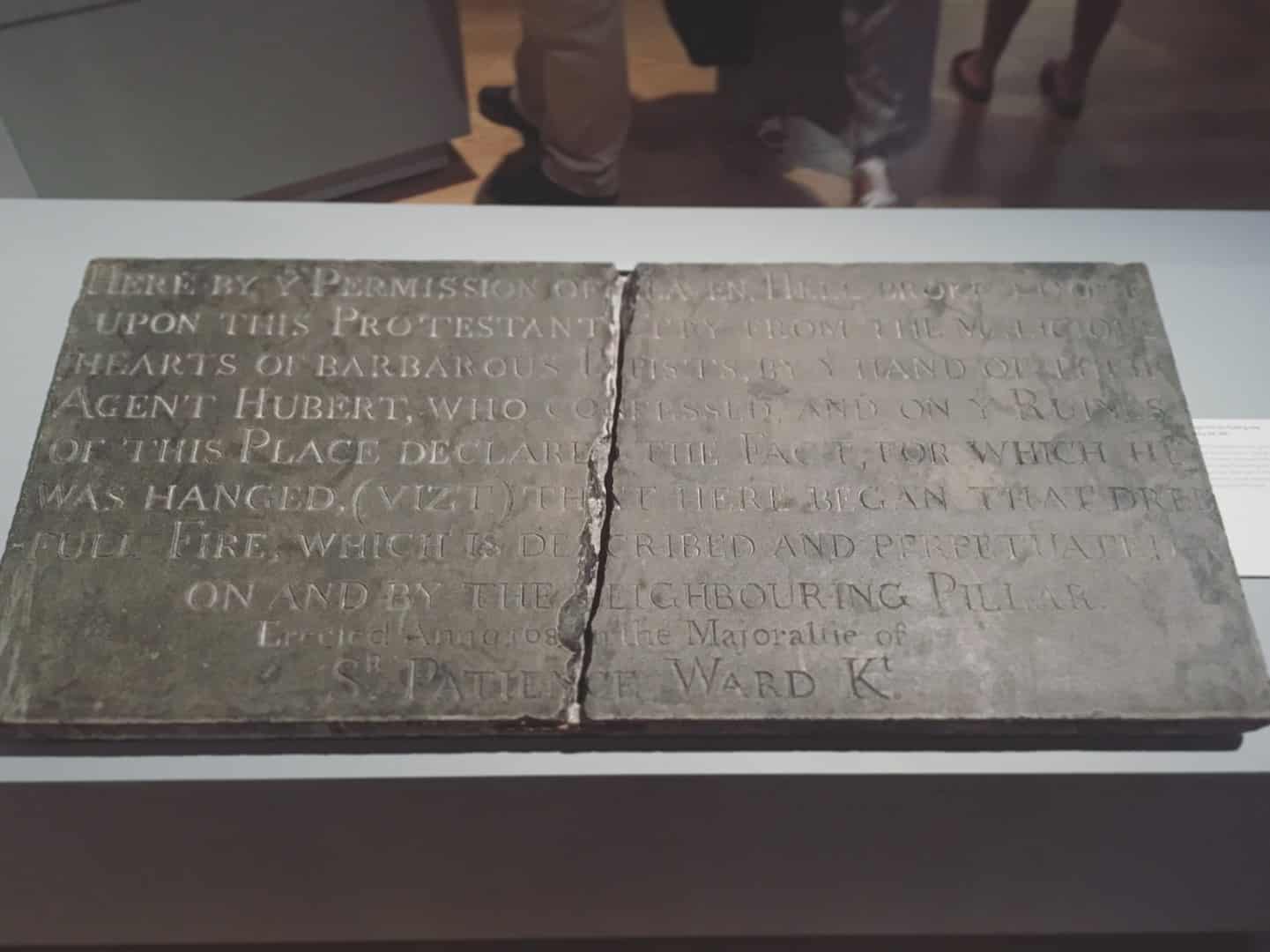 Thousands of Londoners camped in the fields outside the city after being made homeless. For most this was temporary fix before being re-homed, but some stayed here for up to 8 years while the King organised a fundraising scheme.

As well as ordering a market stall to be assembled for the crowds, the navy sent ships’ biscuits to poor people camping at Moorfields. Londoners turned their noses up at the salty, hard snacks and, proving that sometimes beggars can be choosers, sent them back untouched.

It’s one of London’s mysteries that only 6 official deaths are reported, however we cannot be sure how many more died as a result of bureaucratic negligence (simply numbers of the poor, beggars or those incarcerated.) As Peter Ackroyd points out in his book, London: A Biography, many jails were below the surface of the city. Can we assume that all prisoners escaped when their cell bars melted? Or would they have suffocated before being granted that chance?

6. There’s more to Monument than meets the eye

Most of the City had been rebuilt by 1682, including the great monument which commemorated the disaster. Built by Robert Hooke and Sir Christopher Wren, the tall column is actually a giant telescope, with a laboratory in the basement. 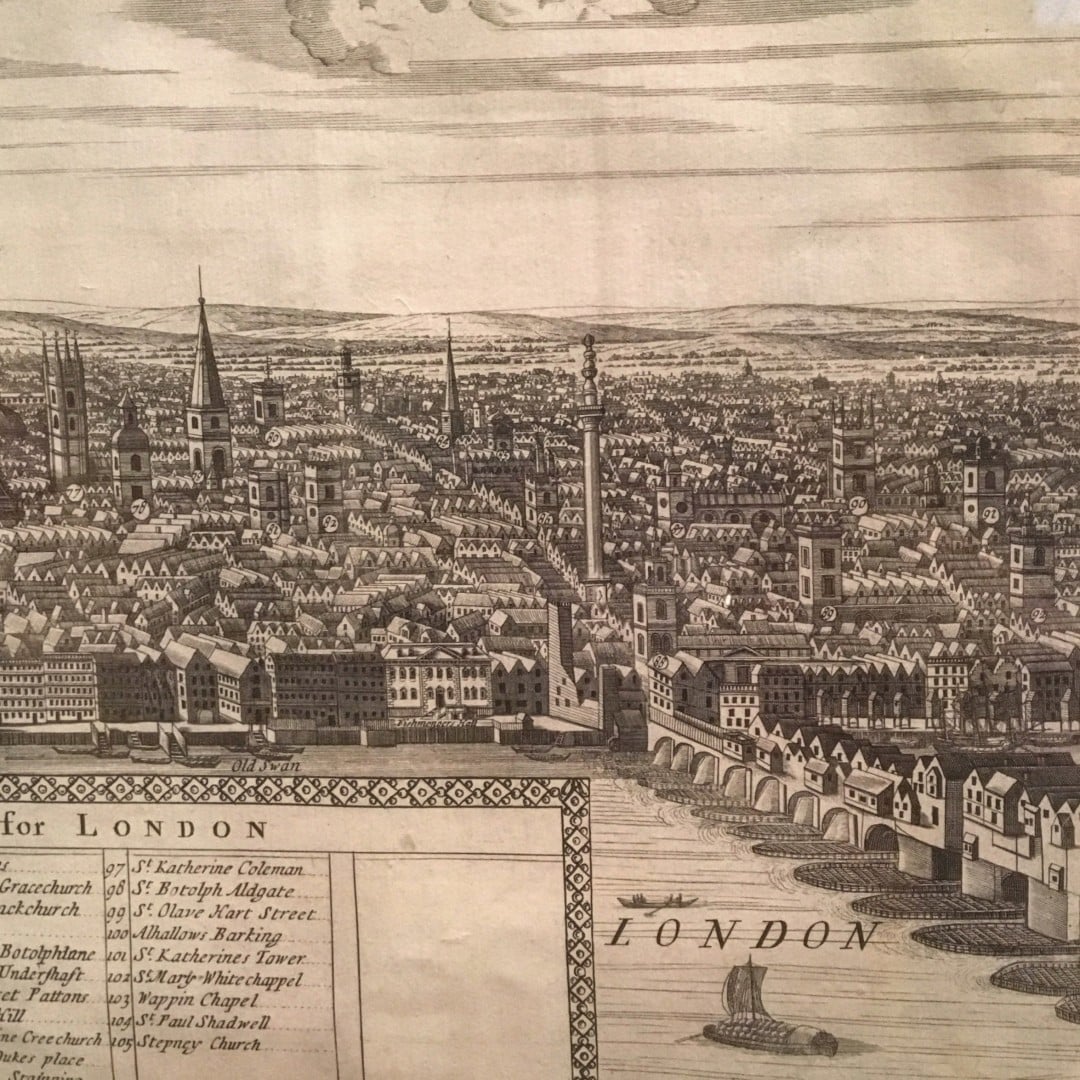 A prospect of London and Westminster, 1681-82 by William Morgan

The body of Robert Braybrooke, Bishop of London fell out of its coffin in St Paul’s Cathedral during the fire and was discovered in the ruins and – having died in 1404 – he was perfectly preserved like a mummy and Londoners flocked to take in the sight. Pepys described the poor Bishop’s skin as like a “spongy dry leather”.

John Colet, who died in 1519 and was previously Dean of St Paul’s, suffered the indignity of having his tomb broken opened during the fire’s chaos. When it was discovered it was apparently full of liquid which two men tasted. They reported that it was “ironish, insipid” and the body (which they naturally poked with a stick) felt like brawn (meat jelly).

Fire! Fire is on until 17 April 2017
Tickets are £8 (£4 for children and there’s plenty of great interactive things for them – and adults too!)
Find out more here.