in architecture, Churches and Graveyards, London, Look Up London, Things to do in London, West London
0 Comments

5 minutes from Oxford Street and nestled between some new-build flats, is Fitzrovia Chapel. From the outside you’d hardly take a second glance, except to consider this might be a church of some sort.

Inside however, it’s a literal gem. A small and very sparkly bit of London history.

The Chapel was designed by John Loughborough Pearson* and completed by his son Frank. Covered in glittering mosaics, the chapel proved a costly and time-consuming project.

*Today the chapel sits in a new street named ‘Pearson Square’ presumably after this Father-Son team.

It was started in 1891 by Pearson senior and the first service took place on 19 September 1915. Back then it had a timber roof, but by 1929 Pearson Junior had added a vaulted ceiling covered in mosaics.

So it’s Frank, the son, we have to thank for the bling. Pearson Senior died in 1897 and between then and 1901 Frank worked on the magnificent ceiling.

Inspired by San Marco in Venice, he employed Italian craftsmen and imported the finest materials (including seventeen different kinds of marble!)

What Happened to Middlesex Hospital?

The hospital moved to this location (Mortimer Street) in 1757 and lasted until 2005. It was demolished 3 years later but until 2013 the chapel was in limbo.

Originally the site was going to be developed by the Candy Brothers. They pulled out because of the financial crash in 2008 and thankfully Robert McAlpine took over. Work began on restoration in 2013 and (after £3million of work) the chapel was ready to open for Open House London 2015, a full century after its first service.

The restoration work was carried out by Caroe & Partners, so it’s them we can thank for this astonishing little London marvel. 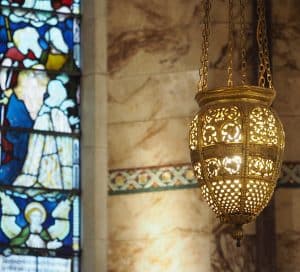 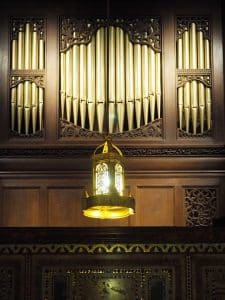 Today – though it looks fabulously historic – the organ is an Allen electric organ, but the original 2 manual, 13 stop organ was made in 1870 by the London firm Lewis & Co. 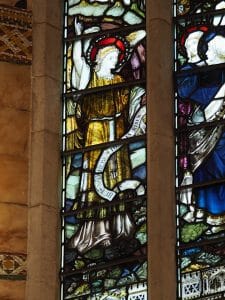 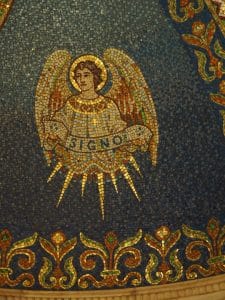 The Chancel ceiling was finally finished in 1939. 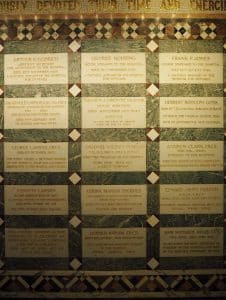 At the entrance of the Chapel are marble panels with names of Middlesex Hospital doctors and surgeons who contributed to the Chapel.

The Chapel is open every Wednesday between 11:00 and 16:00 to visit for free. It’s also open for a wide range of events listed here.