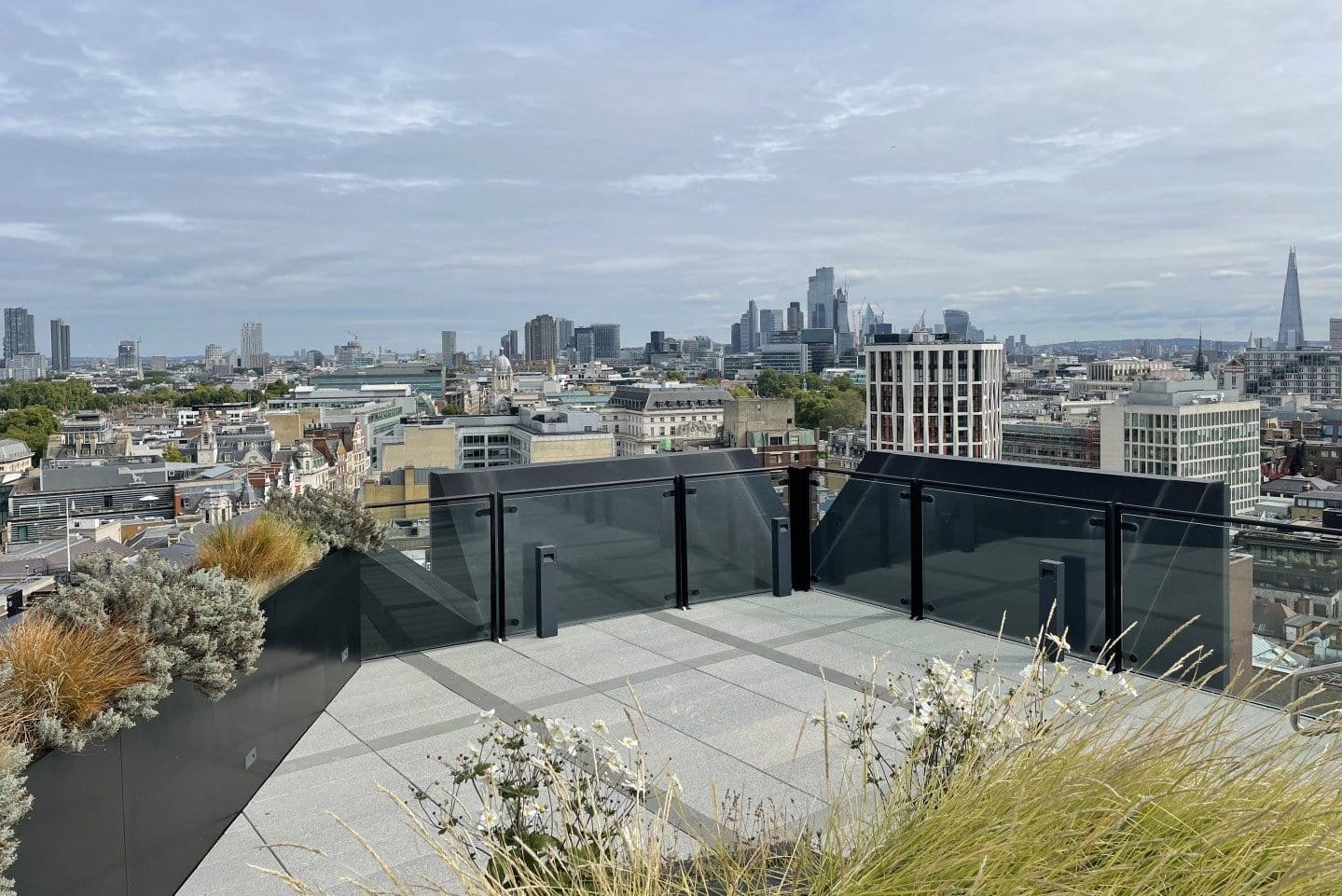 Thanks to the tip off from Londonist for a new free rooftop in Holborn. I popped in to visit yesterday and not only is it spectacular but there’s some fun geeky history to find too!

The rooftop can be found on top of the Post Building in Holborn. The building – as the name suggests – was once a Royal Mail sorting office and you’ll find the rooftop entrance on New Oxford Street. A small sign for ‘public roof garden’ is on the large glass double doors (I’ve added a yellow arrow for clarity)

It’s completely free and open Monday-Sunday 10am-7pm. You’ll need to sign in and go through security then head up in the lift.

As you exit the lift, the view over to Bloomsbury and Fitzrovia opens up ahead of you.

Directly ahead is the very odd steeple of St George’s Bloomsbury, made famous in Hogarth’s etching of Gin Lane.

Behind it is the green dome of the British museum, surrounded by the glass cushion of its Great Court which looks like this from the inside.

The 7,500sq ft roof is stepped to allow a full panoramic view across London and its seriously impressive.

You can see all the way over towards The City and Canary Wharf in the East.

As well as the London Eye and House of Parliament in the West.

The former sorting office for the General Post Office was completed in the 1960s. But intriguingly the Western Central District Office wasn’t just a sorting office, but also a stop on the underground Mail Rail.

Built in 1911 and covering over 6miles under London, the Mail Rail worked 22 hours a day shuttling letters and parcels 70ft below the city. You can read more about it here and walk through the former tunnels here.

In the entrance for the rooftop there’s a map of the Mail Rail, I’ve circled the former station below.

But there’s an even cooler addition in the entrance lobby. A surviving spiral chute which eased the heavy lifting on staff and made the process more efficient!

On the wall is an infographic explaining the process of sorting letters and parcels.

You can read more about the history of the General Post Office (and a strange survivor in Walthamstow) in my blog post here.

The public rooftop garden is open Monday-Sunday, 10am-7pm and completely free with no pre-bookng required. You’ll have to go through airport-style security and sign in with a name and email. Large bags might have to be left in lockers at the front desk. There are toilets (including disabled toilets at the top).

Let me know if you’re planning to visit in the comments!