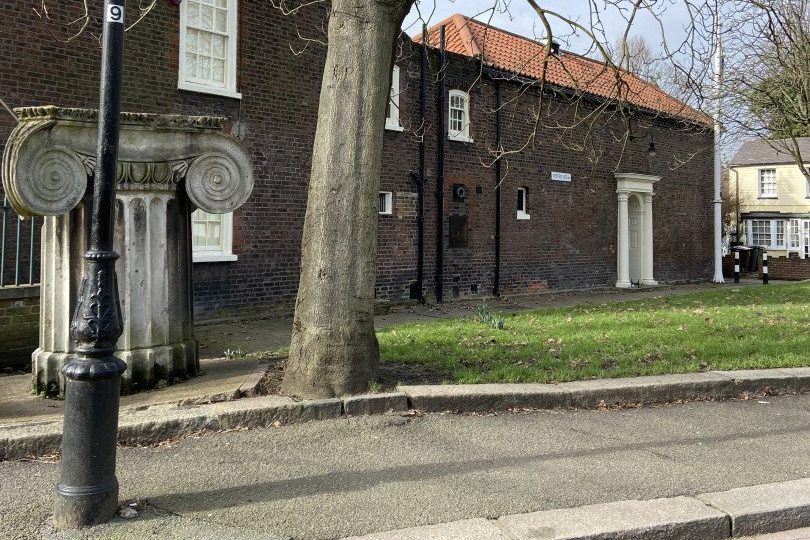 Along Vestry Road in Walthamstow there’s a huge Ionic Capital which looks very out of place.

It’s the last piece of the General Post Office Building and once stood 7 miles away in the City of London.

Although the history of a national postal service goes back to the 16th century, it was in the 19th century that a new General Post Office headquarters was planned for the City of London, in the shadow of St Paul’s Cathedral.

Designed by Robert Smirke and built between 1825-29, it stood on St Martin Le Grand.

To get a sense of how impressive the building was, we can look to the late 1820s engraving by Thomas Shepherd.

You can also clearly see the huge ionic capitals at the top of the columns.

And here is the present view along St Martin Le Grand from 2021.

Further buildings were added from the 1870s onwards and eventually this first building was known as GPO East.

There was the Central Telegraph Office (GPO West) now part of the BT Centre, GPO North (now Nomura House) and the King Edward Building whose facade is still the same but now contains the Bank of America Merrill Lynch.

So, perhaps unsurprisingly, this whole area was known as London’s ‘Post Office Quarter’ and cementing that locale was the Post Office Tube Station (today known as St Paul’s Station) which was built by the Central London Railway in 1900.

The name changed to St Paul’s in 1937 after the other St Paul’s Station changed its name to Blackfriars, confusing isn’t it?!

Controversially it was demolished in 1912 and there’s a rather heartbreaking photo of it mid-destruction on the postal museum website here.

So why is a piece of it in Walthamstow?

Well, this is thanks to Frank Mortimer, a stone mason who had apparently purchased this section of the building and later presented it to the Borough of Walthamstow.

Firstly it was in Lloyd Park but it’s been on Vestry Road since 1954, delighting and puzzling passersby ever since!

I haven’t been able to find out much more but I suppose it’s a similar story to the parts of Old London Bridge that turn up across London.