in East London, London, Look Up London, Things to do in London
0 Comments

A lone tower stands just outside Hackney Central Station. Sure, it looks old and possibly historic, but not many people realise that it’s the oldest building in the borough! Time to have a closer look at Hackney’s church tower; St Augustine’s.

Formerly part of the church of St Augustine, that church was built in the late 13th Century. At this point Hackney was surrounded by fields, a welcome retreat from the noise and dirt of The City of London.

During the 16th and 17th centuries, the church was extended. As well as architectural additions, seating was also increased so the church could cater for 1,000 by 1789. However, even this wasn’t enough for the swelling congregation.

In 1790 the Vestry got permission to demolish St Augustine rebuild a bigger church. St John-at-Hackney was finished in 1797. It stands a few minutes from St Augustine’s Tower and was designed by James Spiller. 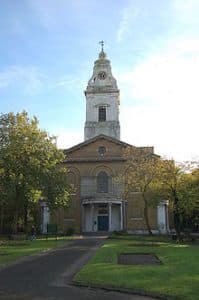 With a new church built, the former was unnecessary and destroyed. But, thankfully, not all of it…

The main reason for keeping the tower was that the original St John-at-Hackney didn’t have a one. One was only built in 1814 but it wasn’t strong enough to hold the bells. These were kept in  St Augustine’s tower until at the 1840s.

Clearly, they don’t make church towers like they used to. Cheerfully, this meant the survival of St Augustine’s Tower. Practically speaking it should’ve been destroyed with the rest of the building in the late 1790s.

In 1854 St John-at-Hackney was underpinned and the bells were moved. Happily though, the contractor now said that demolishing the old St Augustine’s Tower was too much like hard work. Literature from The Hackney Historic Buildings Trust says; “happily no one pressed him to fulfil his contract”.

But it gets even better…

If you’re happy squeezing up a cramped spiral staircase, Hackney’s Church Tower has plenty other wonders to unveil. 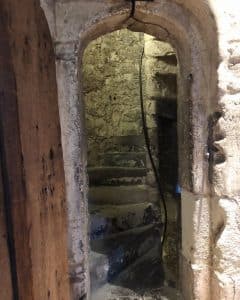 Including the clock room with an intact 16th or 17th century mechanism. The Curator of Horology from the Royal Observatory in Greenwich called it;

“an example of a relatively small group of English clocks, considered to date from the 1580s but continuing to be made in traditional design until the end of the 17th century.” 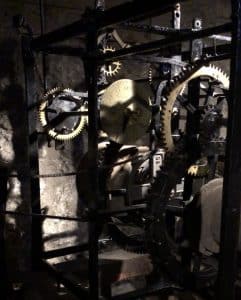 And then – after manoeuvring yourself through a small window of an entrance – you emerge blinking on the roof.

The lone tower affords some great views back across The City of London. 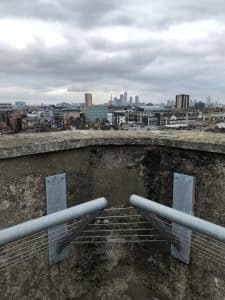 It was pretty extraordinary to stand on these centuries-old stones and know that pretty much everything you see before you is newer than what’s beneath you!

St Augustine’s Tower is open for visiting every last Sunday of the month, typically in the afternoon (around 2pm-4.30pm).