Hidden History of the Barbican

in architecture, Churches and Graveyards, City of London, London, Look Up London
14 Comments

Love it or hate it, most people know the Barbican simply as a post-war housing estate. But there’s actually a lot of hidden history waiting to be found.

I asked my friend Erin, fellow Blue Badge Guide and founder of Heard in London, to share the history of the Barbican that often gets overlooked. 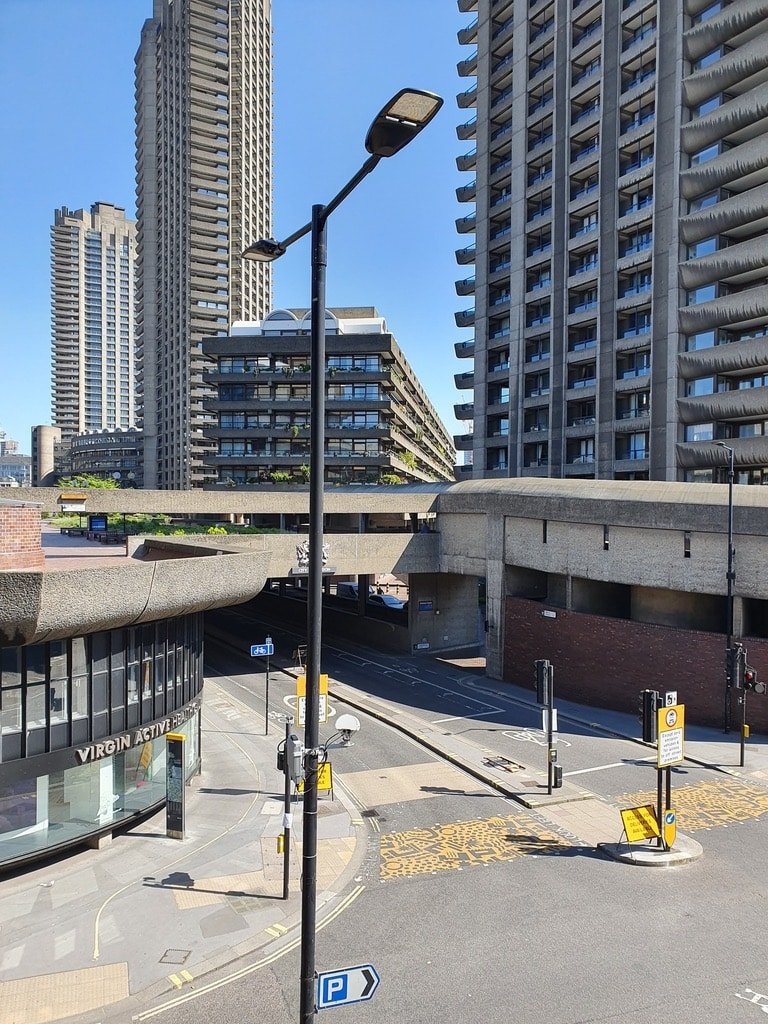 I’m sure many of you know of the Barbican. The intimidating complex which seems to rise out of nowhere in quite a abrupt manner. You may have even ventured inside it, perhaps got lost whilst trying to navigate the walkways and it’s quite possible that some of you were even lucky enough to find the Arts Centre within. But even if you haven’t, I am sure most of you will have quite a strong opinion of it, it’s very much a marmite piece of architecture.

I am one of the lucky six thousand residents to call it home, which always makes a nice topic of conversation, and of course I am completely in love with it.

It’s pretty common knowledge that it was built after the Second World War on an area completely devastated by bomb damage, but there’s actually a lot of history to it as well. You’ve just got to delve a little deeper to discover it.

Early History of the Barbican

The Barbican takes its name from a fortified outpost or gateway built for protective purposes which was situated in the area from the time of Roman occupation.

Some parts of the Roman wall can still be seen today, the section in the Barbican was actually rebuilt in the Medieval times. It seems the name Barbican followed the area throughout history too, first the area took the name, and later one of the main roads passing through it.

Although it is firmly set in the City of London boundaries today, in Medieval times it was actually outside the city walls. If you are one of those brave souls that have actually been into the Barbican complex, you may have spotted the beautiful church of St Giles-without-Cripplegate. 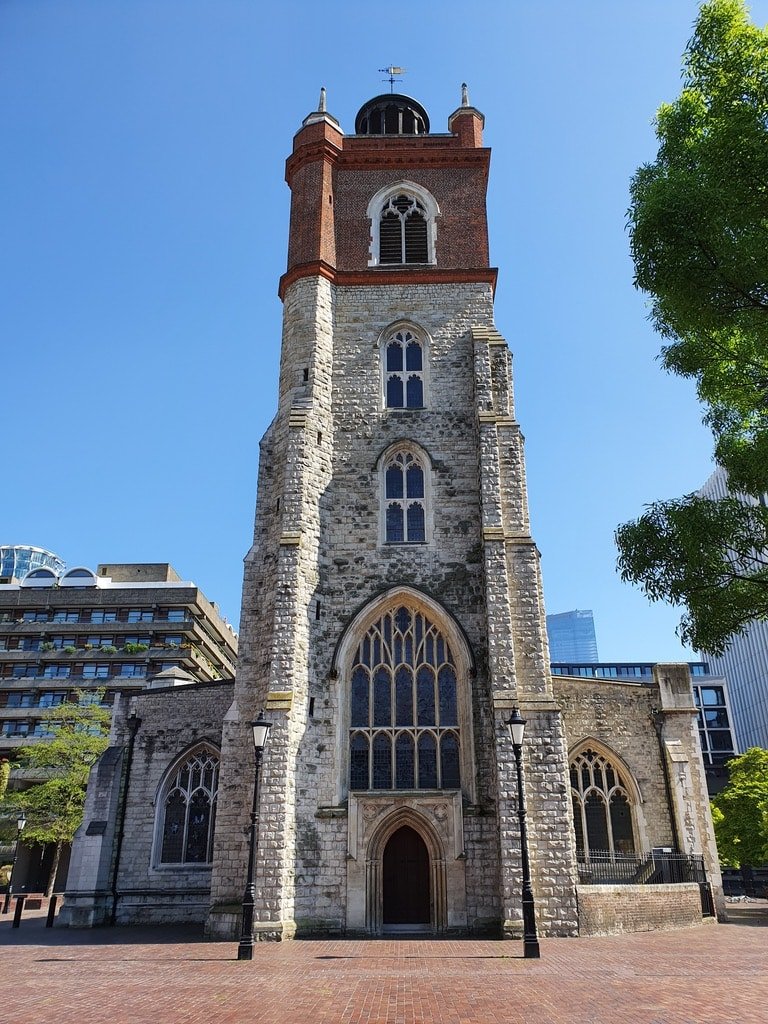 The “without” part gives us a clue that it was situated outside the City.  Some of the other churches in London have a “within” part in their name to differentiate themselves. Cripplegate on the other hand was the name of one of the gates which provided regulated access in and out of London.

Remnants of the Medieval wall can still be seen today. 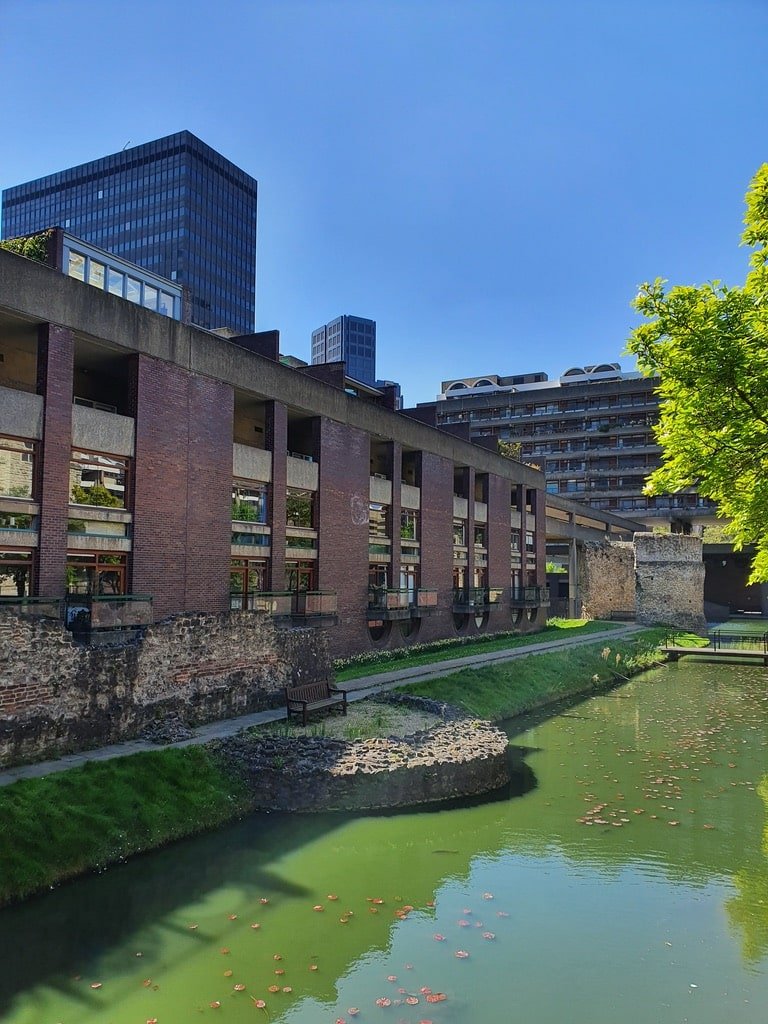 On the Site of a Cemetery

So despite being outside of the City back then, the Barbican actually sits upon the site of the “Jew’s Cemetery”. In fact the communal garden (as seen from my balcony) seems to be the exact spot. 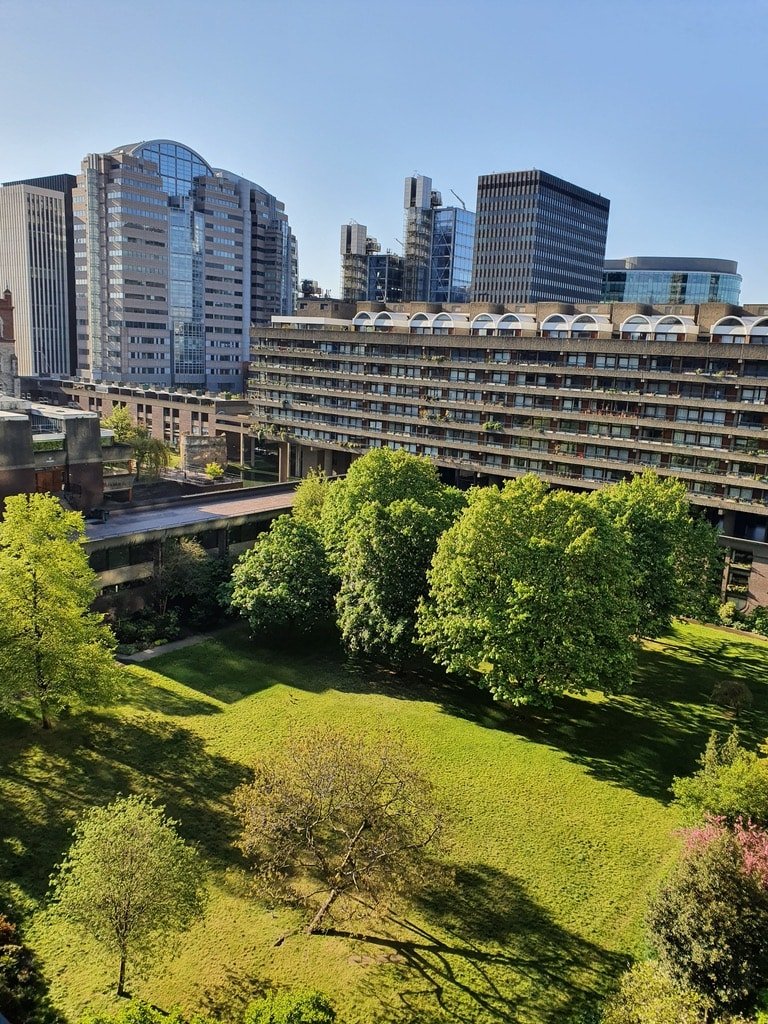 The Jewish Cemetery or the Jew’s Garden as it became to be known, was the first in the country, and was the only place Jewish people in England could be buried up until 1177. It was situated just outside the City walls, and not too far away from one of the earliest areas of London where the Jewish population was situated.

The English historian John Stow tells us that by 1603 it had kept its name as the Jew’s Garden, but was by then being used as gardens with summer houses. Shortly after it seems that it was built over with narrow alleyways with claustrophobic houses, that was the custom in London.

By then, the road which today is Beech Street (pictured below), had taken Barbican as its name. 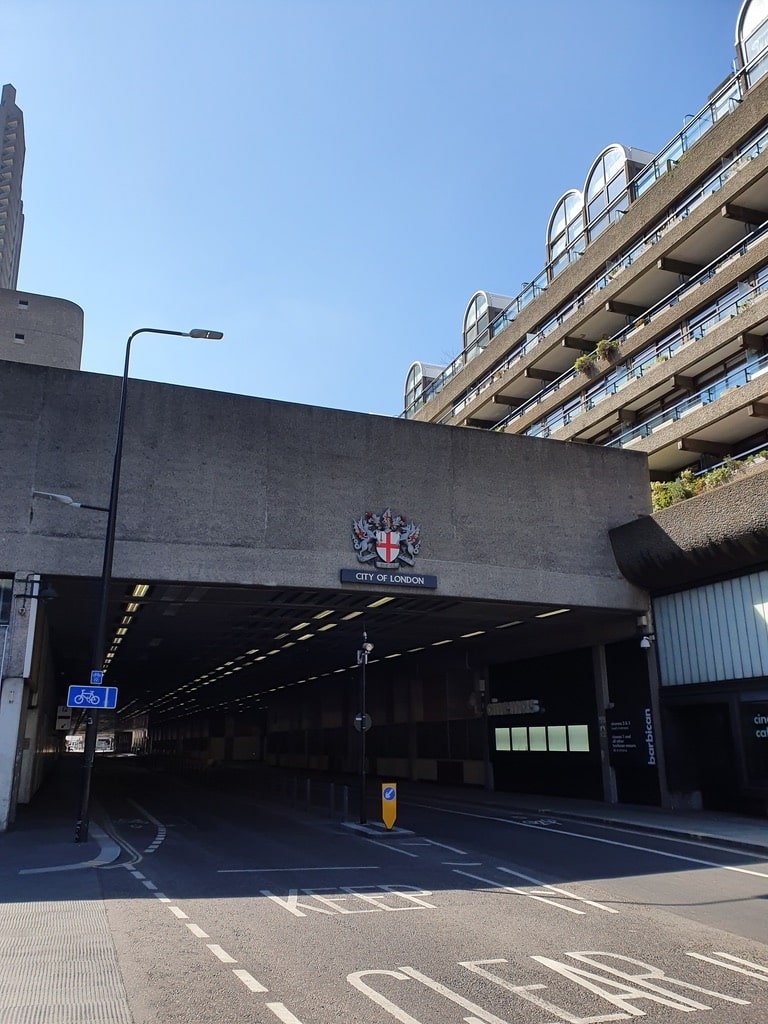 The Story of Beech Street

Why Beech Street you may ask? Well to explain that, you need to head into the Barbican and find this rather gnarly looking piece of wood. 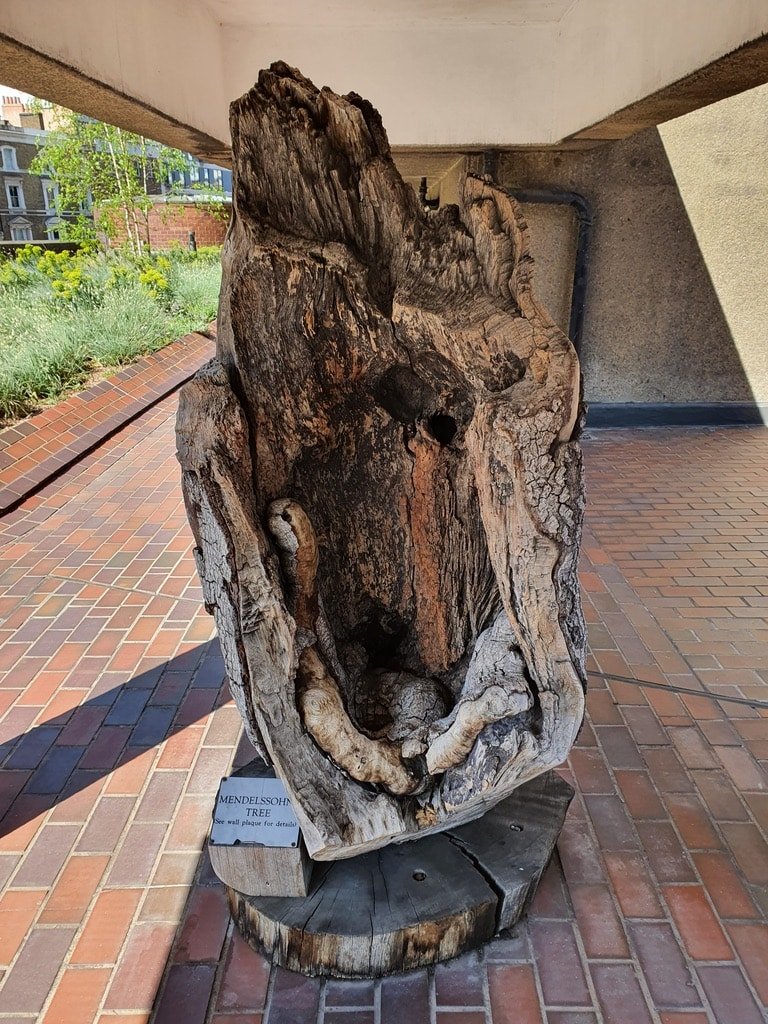 This is the Mendelssohn tree, the remains of a 500 year old beech tree from the forest of Burnham Beeches in Buckinghamshire. The area was purchased by the Corporation of London in 1880, hence why it’s here I guess. The forest was apparently where the famous composer Felix Mendelssohn used to visit for inspiration for his music! 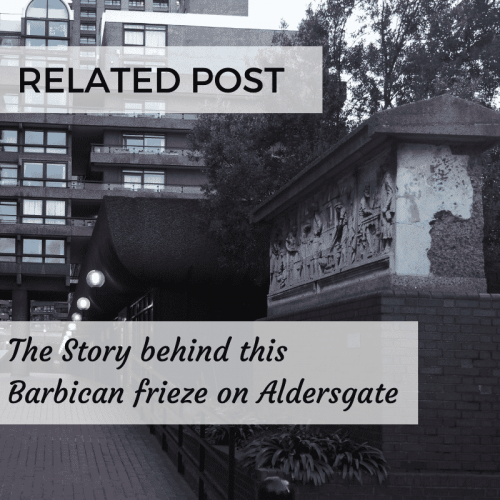 By this point, you may have gathered that I have a slight obsession with maps, and you would be correct. My all time favourite map of London is the Charles Booth’s Poverty Map.

These colour coded maps essentially give us an idea of who lived where in the late 19th and early 20th century.  From yellow indicating “Upper-middle and Upper classes – Wealthy.” to black  for those considered the “Lowest class -Vicious, semi-criminal.”

Looking at the area there’s a few more bits of interest. 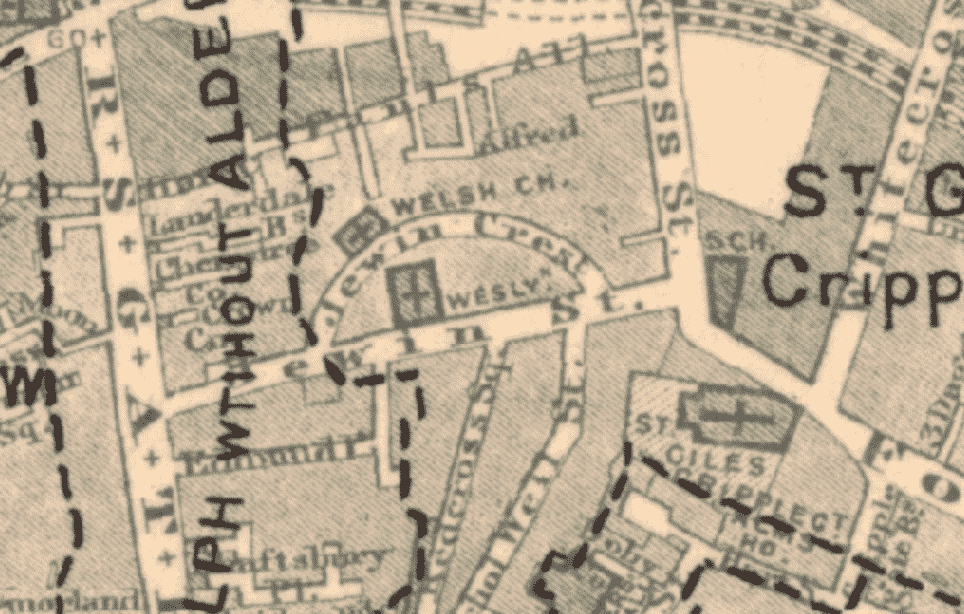 You can see a Welsh Chapel marked, as well as a “Welsey Chapel”. Also note that the road it’s on is still known as Jewin Street, remembering the Jewish Cemetery. In fact the road was still there until the Second World War. The Wesleyan Chapel was established in the 18th century by John Wesley, but he soon relocated to City Road just around the corner and even today you can still visit his home and the chapel he re-founded there too.

The Stark Reality of the Damage

As mentioned previously, the Barbican came into being because of the complete destruction of the area in the Second World War. In fact the very first bomb to fall in the City of London was just on the eastern edge of the Estate, and today you’ll find a plaque on Fore Street to mark the spot. 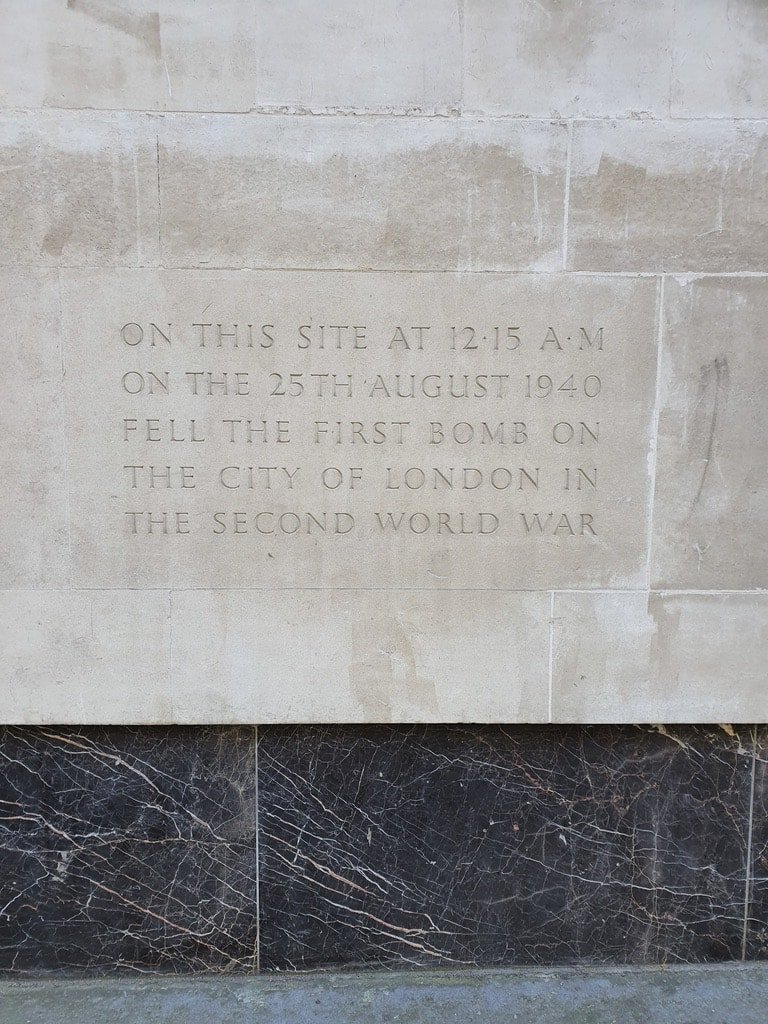 If you’ve never come across the Bomb Damage Maps from the Second World War, then you really need to set aside a few hours and do so. This incredible resource is now online, and it means you can literally find the street you live on and find out more about bomb damage there. I’m sure it will come as no surprise that the whole area of the Barbican is shaded in purple, signifying “damaged beyond repair”. In fact zooming out and looking at the City of London is quite a chilling realisation of the scale of destruction.

As we walk around the area today, underneath the towering sky scrapers and of course the Barbican itself, we often need reminding that the whole of this area was almost completely wiped out, and what we see today is just the modern reincarnation of the City which has risen up from the ashes time and time again.