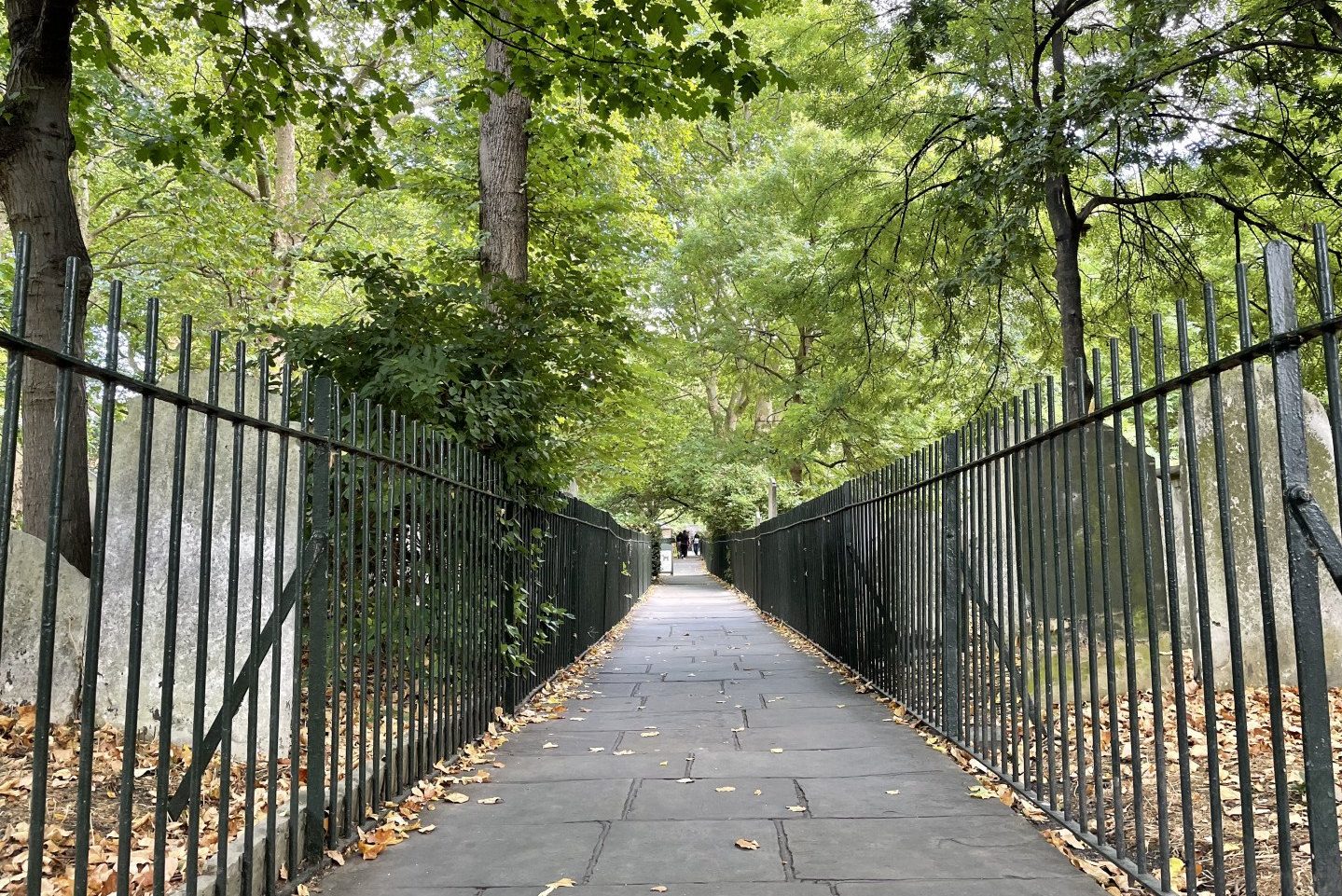 The History of Bunhill Fields

Today Bunhill Fields is a wonderful slice of calm alongside the busy Old Street roundabout. But its history is macabre, curious and full of surprises.

Its name is a derivation of bone hill, literally where cartloads of bones from St Paul’s Cathedral’s Charnel House were dumped rather unceremoniously. Once covered with a thin layer of soil it formed a hill outside the City of London walls in the 1550s.

As a well as being physically distanced from the City, this was a burial space for those on the outskirts of the accepted church; heretics and non-conformists.

This tradition carried on throughout the centuries, right up until Bunhill Fields closed for burials in 1854.

In terms of an official opening, we have the year 1665. This might ring a bell? It’s the year of one of the worst plagues to hit London. The Wellcome Collection has “Scenes in London during the plague of 1665” in its archives. It’s a facsimile reproduction from a pictorial broadside of 1665-6.

So the haphazard ‘Bone Hill’ was planned as an emergency burial ground for the City, enclosed and a little bit more organised. Whether it was actually used as a plague pit however remains unclear.

Below shows Bunhill Fields, literally on the edge of the map! from J. Ogilby and Morgan’s map of London from 1676.

Following the upheaval of plague and then the Great Fire in 1666, Bunhill Fields was never consecrated. Now in the private hands of a Mr Tindal it was used almost exclusively for the burials of Nonconformists.

It’s estimated to be the final resting place for 120,000 bodies.

Below you can see Bunhill Fields (circled in yellow) and just called the “City Burying Ground” on the John Rocque map of 1746.

Since 1867 the City of London Corporation have managed Bunhill Fields as a public open space (one of over 350 in the Square Mile!) and in 2010 Dunhill Fields was given Grade I listed status as part of the English Heritage Register of Parks and Gardens.

Born in 1669 and famous as the Mother of John Wesley, the ‘Father of Methodism’. Susanna was born in Spitalfields, raising and educating her 11 surviving children while also finding the time to write her own thought and commentaries on theological matters. I’ve written more about her and Spital Yard here.

Her grave stone isn’t usually this easy to see as it’s beyond the public railings, however one fo the friendly volunteer gardeners let me in and informed me that if you’re interested in a particular grave off the public paths the porter has a key show you around.

Born in 1660 in the parish of St Giles Cripplegate, a short walk from Dunhill Fields, Defoe was a writer and is most famous for his novel Robinson Crusoe (1719). However one of his most evocative works is Journal of the Plague Year. While Defoe himself was only 6 at the time, he draws on his Uncle’s memories and while it’s now treated as a fictional work is still gives us vivid, horrifying scenes that help us create a picture of 1665.

“This is a world of corpses strewn in streets and pits,
yet in the deadcart itself a drunken piper wakes up to cry, ‘But I an’t dead tho’, am I?’

Defoe died penniless in 1731 and his wife joined him the following year. The grave was marked with a simple headstone until rather dramatically it was struck by lighting and cracked. In 1870 an impressive obelisk, raised from public donations, was unveiled in the presence of 3 of his great-granddaughters.

John Bunyan was a Puritan preacher and is best known as the author of the Pilgrim’s Progress. A non-conformist who refused to curtail his preaching after the restoration of the monarchy in 1660, Bunyan wrote his seminal work while in prison and it was published later in 1678.

Bunyan died after falling ill in 1688. Curiously, the monument of Bunyan is on top of the family vault of John Strudwick. Strudwick was a friend of Bunyan’s and when he died in 1695 Bunyan’s remains were moved from Bunhill Field’s ’Baptist’s Corner’ into this far more grander resting place.

The stone effigy of Bunyan was a later addition from 1862 and the memorial was further restored in 1928 and after the Second World War.

Poet, writer, artist and often described as a visionary, William Blake has not one, but two memorial stones in Bunhill Fields. Until 2018 you would only find this tombstone, saying that Blake and his wife Catherine Sophia were “near by”.

That was until Carol and Luis Garrido embarked on two years of research to find the exact location of Blake’s final resting place.

Shedding light on the overcrowded nature of the cemetery, they found that Blake (largely unrecognised when he died in 1827) was the 5th of 8 coffins buried in this plot.

His new gravestone was carved by Lisa Cardozo and includes a verse from his poem, Jerusalem (published 1808)

I give you the end of a golden string
Only wind it into a ball
It will lead you in at Heavens gate
Built in Jerusalems wall.

I hadn’t heard of this musician and composer before, but the curious addition of a musical score on his tombstone caught my eye!

Born in 1760 and the son of a farrier, William became a chorister in Canterbury Cathedral the later an organist in Clerkenwell.

The music on his tombstone is Miles Lane / All Hail the Power of Jesus and you can listen to the full version here. Sadly for William, it was a bit of a one hit wonder.

As we’ve seen, Bunhill Fields is a crowded place and also buried with Shrubsole is John Benjamin and Mary Tolkien, grandparents of JRR Tolkien

One of the largest gravestones remembers Mary Page who died in 1728. On the other side it has this curious inscription;

“In 67 months she was tap’d 66 times. Had taken away 240 gallons of water without ever repining at her case or ever fearing the operation”

Mary was married to Gregory Page, a wealthy merchant, Directer of the East India Company and Member of Parliament. She used her privilege to be a generous philanthropist and member of the community all while – according to her tomb – she was suffering horribly.

Tap’d meant draining excess fluid and it’s been suggested that she might’ve had Meig’s Syndrome which is still treated by draining off fluid from around the lungs. She sounds quite the stoic.

Bunhill Fields is typically open during the week from 8am and on weekends and Bank Holidays from 9.3am, closing at dusk.

See the latest opening times and up to date visiting information for Bunhill Fields on the City of London website here.