in London, Things to do in London, West London
2 Comments

I’d never heard of Gunnersbury Park, it was only after a chance photo and mention on Instagram that I made a trip to visit and boy! was it worth it.

After a £50m makeover in 2018, the 200 acres have history, beautiful gardens, quirky details and extensive sports grounds. 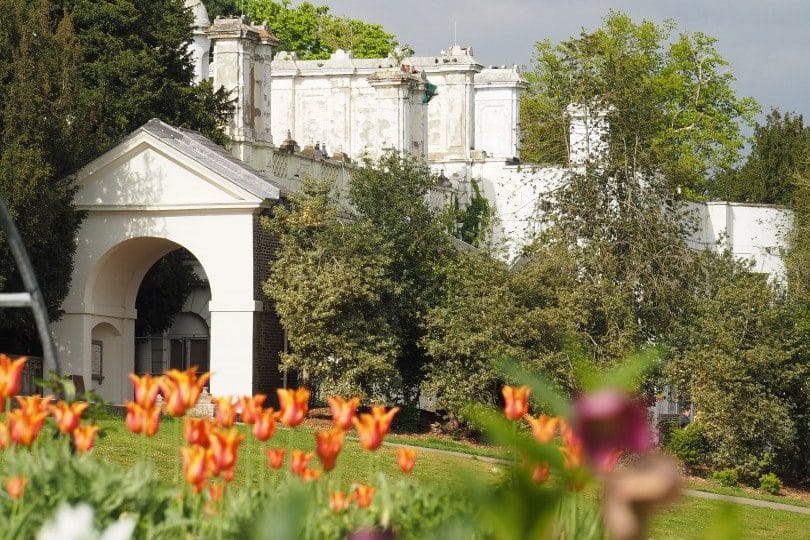 Let’s start at the beginning…

In the Middle Ages the land was owned by the Bishops of London, but post-reformation and seizure of church land, it was bought by Sir John Maynard in 1656.

John Rocque Map of 1746 from www.layersoflondon.org © Maptiler and OpenStreetMap contributors

Maynard hired the architect John Webb to build a new manor house estate. An image of the original house can bee seen in this drawing c.1750.

In 1730 the estate was bought by Henry Furness, the Art Collector and Member of Parliament. Furness in turn hired William Kent who went to town on the gardens, creating canals, pleasure grounds and expanding the estate.

It was then bought by royalty – a Princess no less! The favourite daughter of King George II; Amelia.

She used it to entertain guests and as her summer residence until she died in 1786. During her time here she had a summerhouse and grotto built, remnants of a bathhouse can also still be seen today which is thought to have been a dairy that Amelia had built so she could pretend to be a servant and make milk and cheese – what fun!

Over the next few years it changed hands a few times until in 1800 John Morley, a Chelsea manufacturer, bought it. It’s easy to imagine the shock on the Princess’ face that it was now in the hands of ‘new money’ and even more so when Morley demolished the Webb house and sold off the estate in sections.

The Large Mansion was bought by Nathan Mayer Rothschild in 1835 who planned to make extensive changes, but died before ever moving in. Big walls were built between the two estates because the owner – Thomas Farmer – didn’t want to see the stables. Looking like preserved ruins today, but these were intestinally built as Gothic ruins, the dilapidated appearance intentional.

Later, in 1889, the Rothschild family bought the Small Mansion too, uniting the estate once again!

Today the Large Mansion is home to the Gunnersbury Park Museum, celebrating the local history of Ealing and Hounslow.

The Small Mansion is still awaiting restoration. But aside from the pretty ugly fencing and hoardings looks rather dramatic in its crumbling form.

In 1925 The borough of Acton and Ealing bought lot and it opened to the public the following year with Neville Chamberlain – who later became Prime Minister – cutting the ribbon.

Other highlights within the park include the Potomac Tower, built in the late 1800s for the Rothschild family.

The Temple is an 18th century survivor, built around the time Princess Amelia owned the park. It was built by William Chambers and today hosts a ‘Victorian Classroom’ experience.

Backing onto the Temple are the Italian Gardens, inspired by 14th Century Italian gardens, laid out in the 19th century.

So if you haven’t heard of it before, why not make a trip West and pay the lovely Gunnersbury Park a visit?