As one of the most atmospheric areas of London, Princelet Street has aesthetic charm as well as a long history, but it’s not often you actually get to explore behind the Georgian doors.

I was lucky enough to join the London Historians recently and have a peak inside no. 13, now owned by Landmark Trust (basically an Airbnb for historic buildings) who renovated it and now rent it out as a holiday home.

Princelet, Wilkes and Fournier Street in Spitalfields are typical of 18th Century speculative building, which was when developers would takeover large sites to build housing in search of maximum profit. This area, just outside the City walls, was attractive to large immigrant communities fleeing persecution and arriving in London.

No.13 was built by Edward Buckingham (a stone mason) in 1718-19 and became one of the most prosperous houses in the area. It’s not surprising therefore that most of the residents were either weavers and wealthy merchants (the prevalent trade for Spitalfields at the time was silk-weaving) and most of the 1740s occupants had French names (an indication that they were Huguenots; protestants fleeing persecution from Catholic France).

For multiple reasons the silk-weaving trade went into decline and throughout the 19th Century these glorious buildings were little more than slum housing. Further clues to the decline are from the tenants’ listed occupations, which included Levy, a boot ‘clicker’ (someone who cuts leather for shoes) and Guttenberg, a Jewish jeweller.

You can learn more about the history this area in my ‘Spirit of Spitalfields’ walking tour here.

In 1984 Peter Lerwill bought No.13 and along with architect Julian Harrap they embarked on a three-year restoration plan, bringing the building back into the 18th Century. Lerwill was able to enjoy the house for around 17 years before his death in 2004, when he left it to Landmark Trust in his will.

That’s not to say that Spitalfields is entirely safe from destruction, it’s a constant battle ground with preservation societies and tenants fighting developers, something which East End Preservation Society documents well.
And from this picture you can see it’s not a new trend either, in 2009 Tracey Emin, a local resident, posted this letter under the door in a bid to gather support for a new swimming pool! Reading the letter, it’s hard to tell if it’s a joke or not. Needless to say, the pool was never completed. 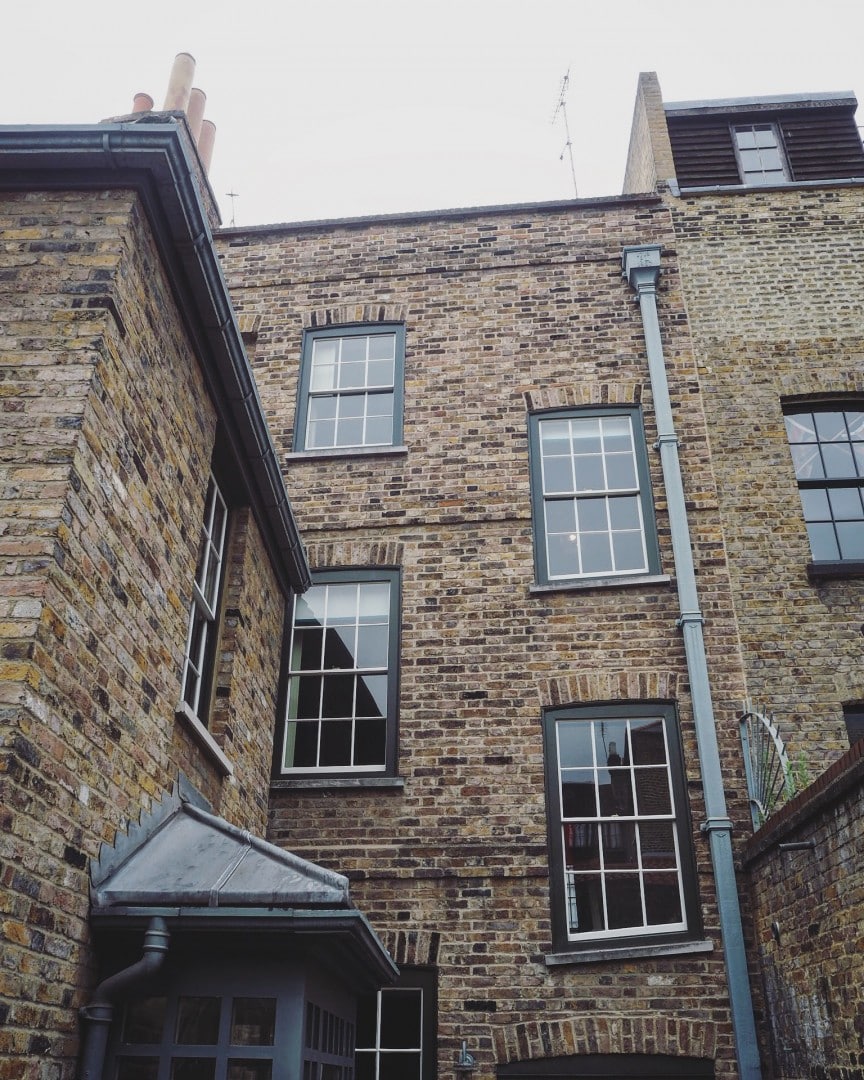 A great view of the wonky windows from the garden.

To find out more about 13 Princelet Street (and enquire about staying there yourself!) visit the Landmark Trust website.