Inside Lloyd’s of London

Known as the “Inside-Out” building, you might not like it, but Lloyd’s of London is certainly one of the most interesting buildings in the Square Mile.

Having walked past for years, I finally got a chance to see what’s behind the exterior and venture into the world’s specialist insurance market. 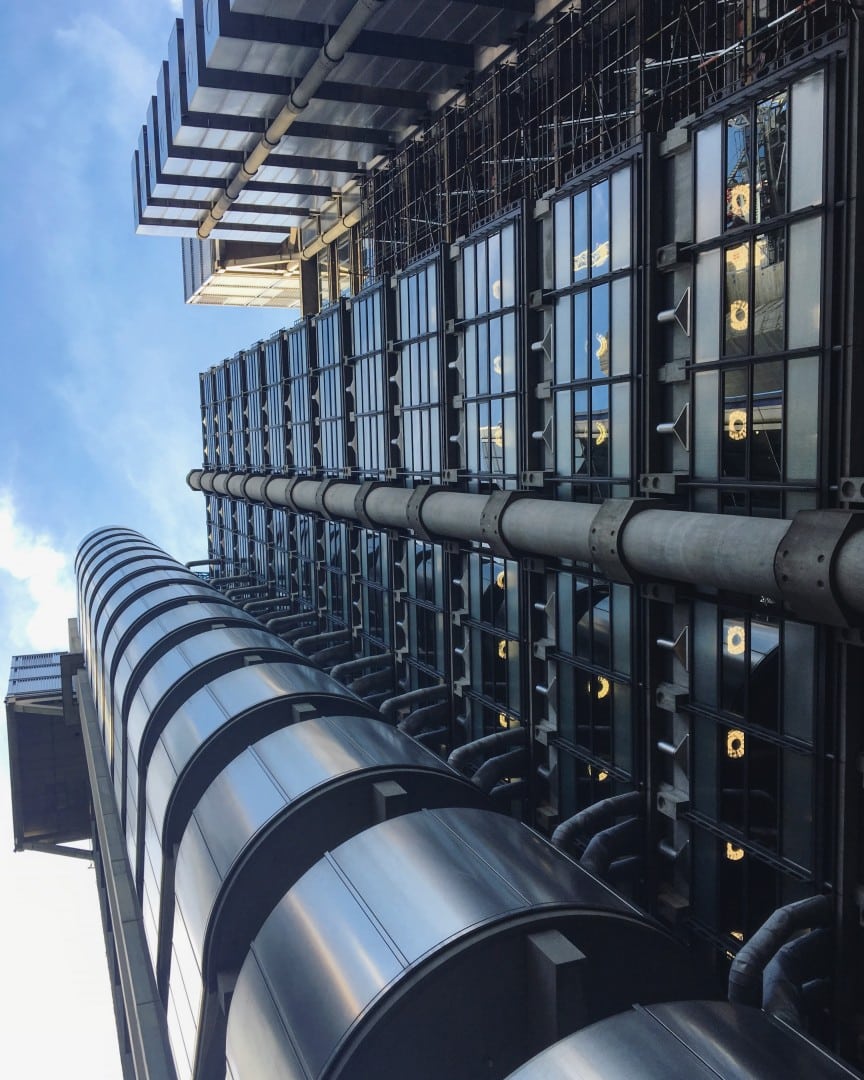 Before we do go inside, a bit of background…

Quick History of Lloyd’s of London

It began with Edward Lloyd, who in 1688 ran a coffeeshop on Tower Street in the City.

Close to The Thames, Lloyd’s Coffee House was popular with ship owners and captains returning from sea to exchange gossip and information. 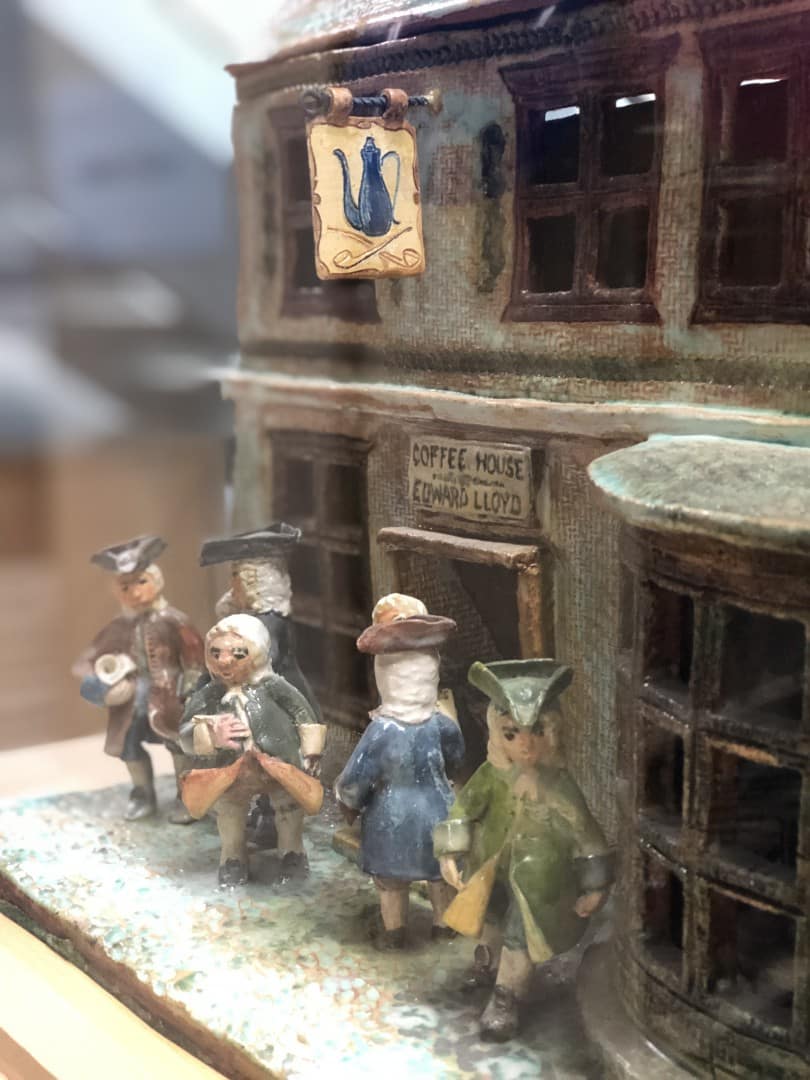 This fun little model can be found in Lloyd’s Register, today its a separate entity but it did spring from the same coffeehouse. Find out more here.

Spotting an opportunity, Edward starting renting his tables (or ‘boxes’) to entrepreneurs who would sell insurance in the event of their ship not returning. It became known as the place to get marine insurance.

Eventually businessmen grouped together, pooling funds to share the risk in the event of a ship’s loss. They would write their names under the total amount of risk they were willing to accept, hence the term ‘underwriter’. 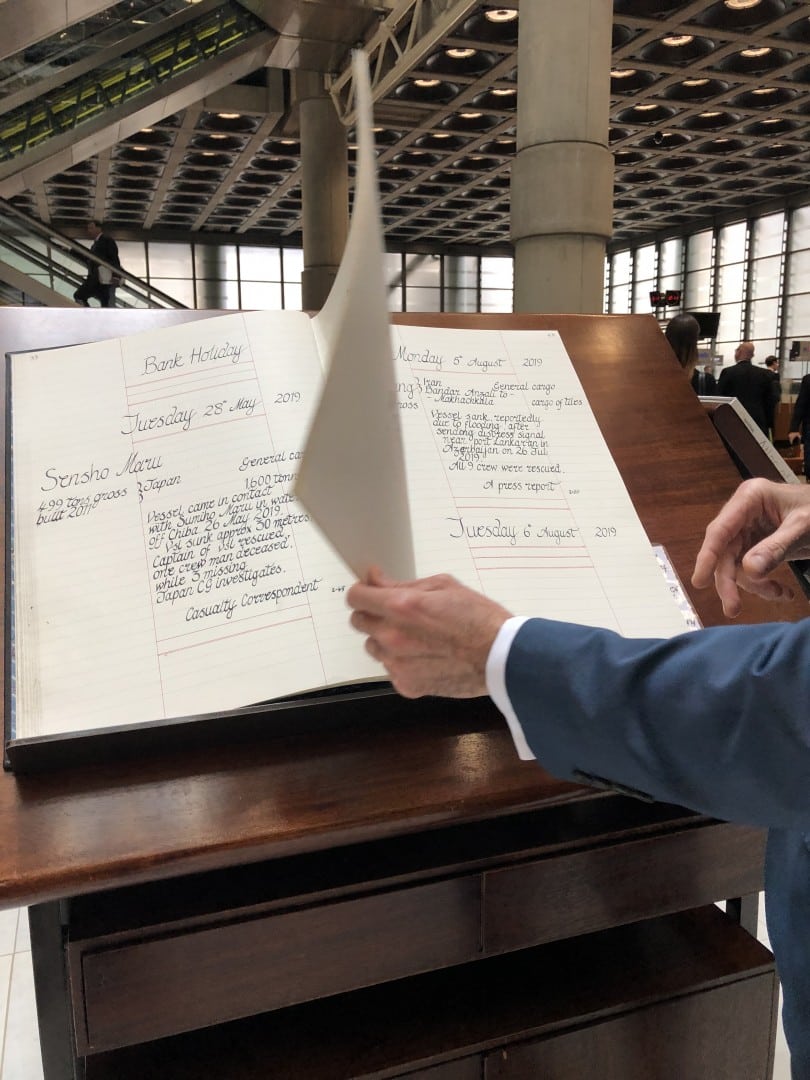 So Edward wasn’t an insurer, he was a facilitator. He provided a platform from which underwriters and brokers built the modern industry.

Despite the rise of computers, most of the business at Lloyd’s takes place face to face in the Underwriting Room. 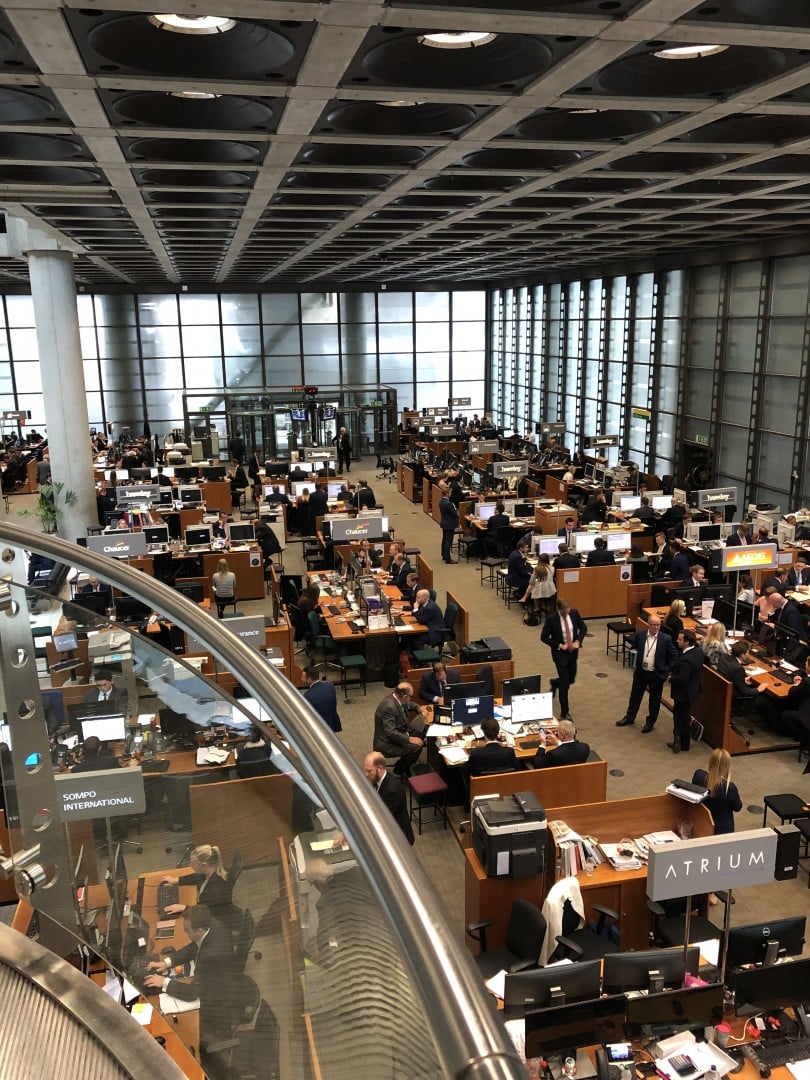 Lloyd’s is less of a company itself and more of a marketplace, Brokers place their clients risk with specialist underwriters at Lloyd’s who have evaluated, pieced and then accepted those risks.

The capital available is provided on a subscription basis and the Lloyd’s underwriters join together as a syndicates. In turn those syndicates join together to underwrite risks. The desks for each syndicate are still referred to as ‘boxes’. 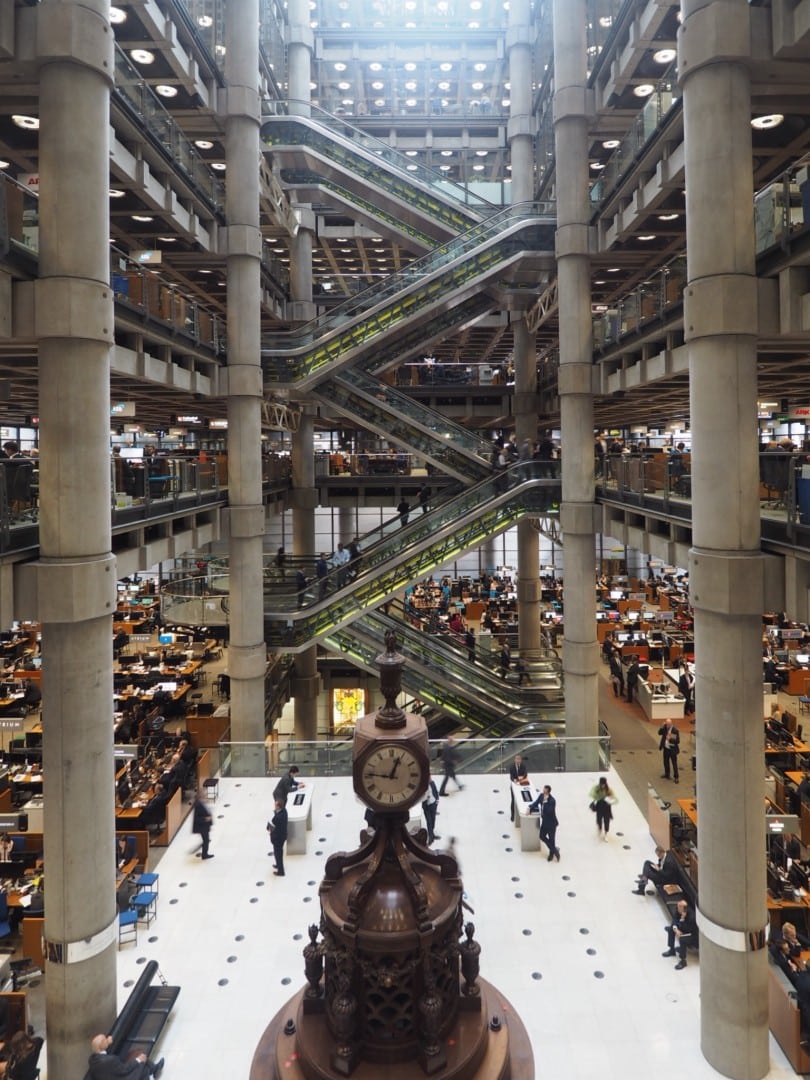 “Not a breeze can blow in any latitude, not a storm can burst, not a fog can rise, in any part of the world, without recording its history here.” Journalist describing the Underwriting room in 1859

On Leadenhall Street, look up to see two buildings in one. 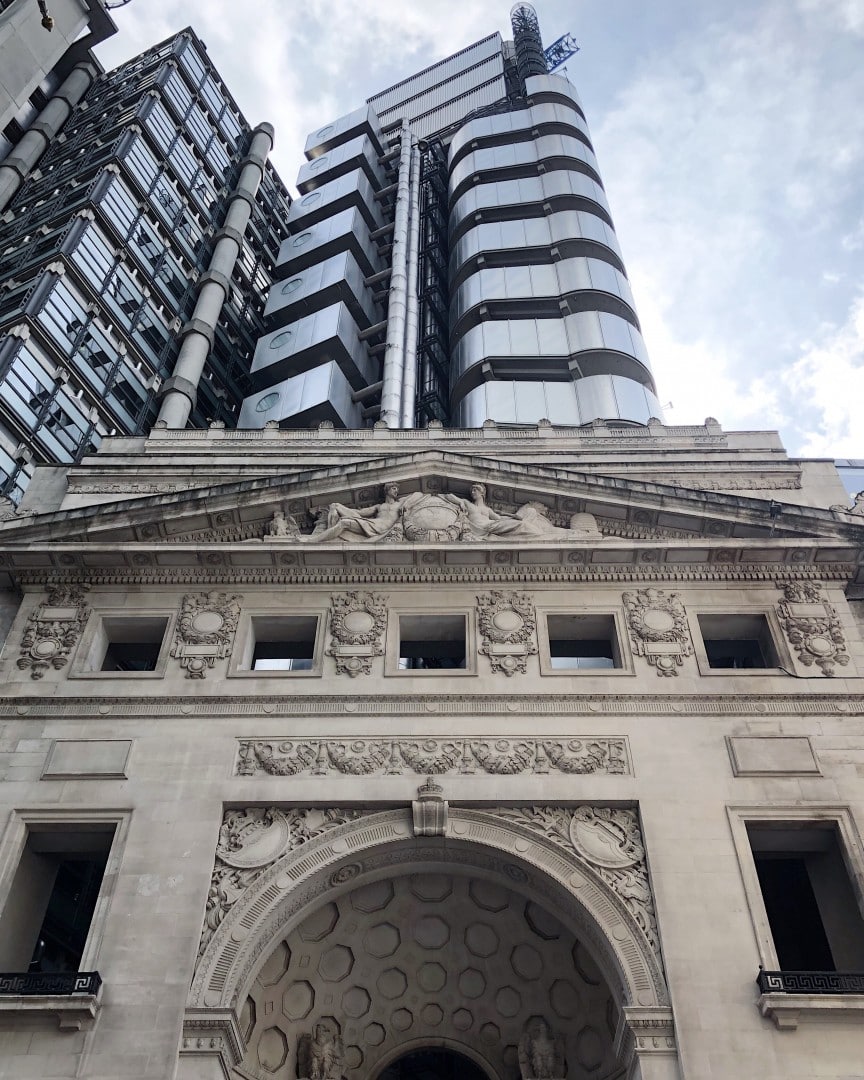 The stone arch as the main entrance to Lloyd’s 1928 HQ. Designed by Sir Edwin Cooper, the building was torn down to make room for the 1980s office building that stands there today.

Today the facade acts as a screen into the entrance of Tower 5. It also has memorials commemorating the 434 from Lloyd’s employees who died across both World Wars.

Their 1920s HQ survived The Blitz undamaged, but Lloyd’s bought a neighbouring building to accommodate its growing needs. By the late 1970s this extension was already too small, they could either purchase a 3rd building or start again.

With the plan to future-proof Lloyds underway, a competition was hosted to receive designs for an adaptable building which could grow with Lloyd’s.

The Inside Out Building

From the street, Lloyd’s is a mass of silver piping. Air ducts, security staircases and lifts cling to the sides. It’s the opposite of what you usually see; all the parts usually hidden are proudly on display outside. 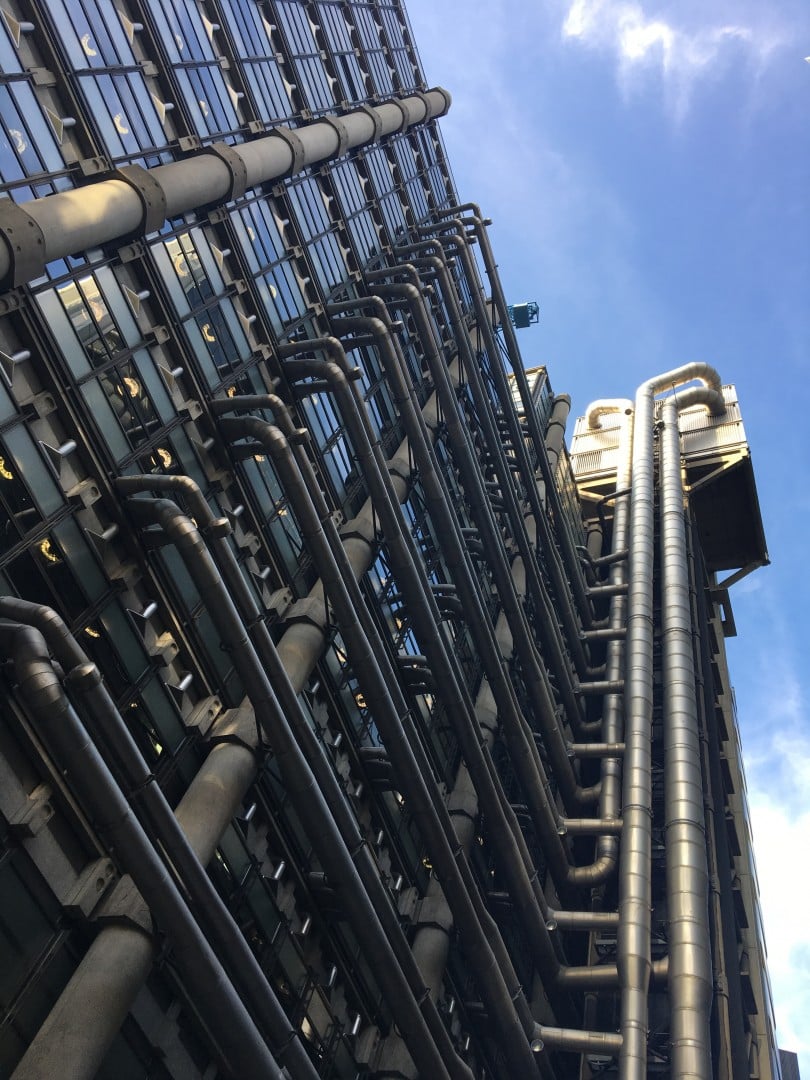 The kind of architecture (termed ‘Bowellism’ – literally your insides, out!) means that the interior can be a huge open space. 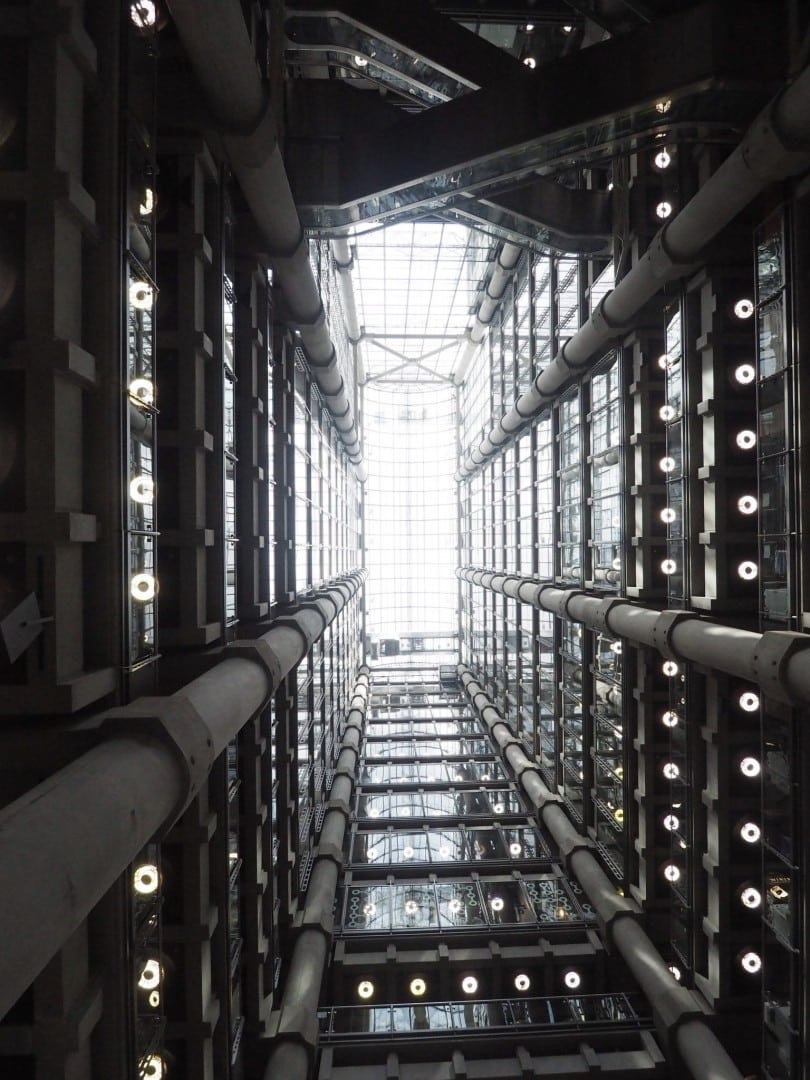 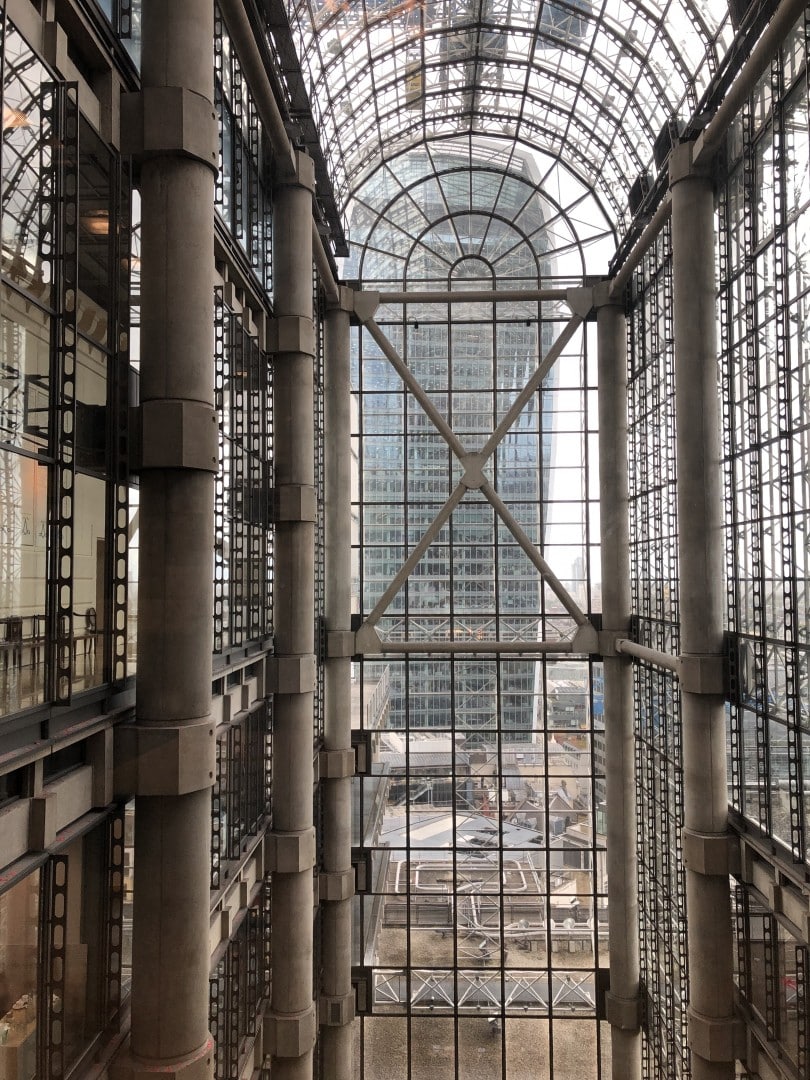 Lloyd’s is full of clever architectural tricks as well as history. Here are some of my favourite quirky details. 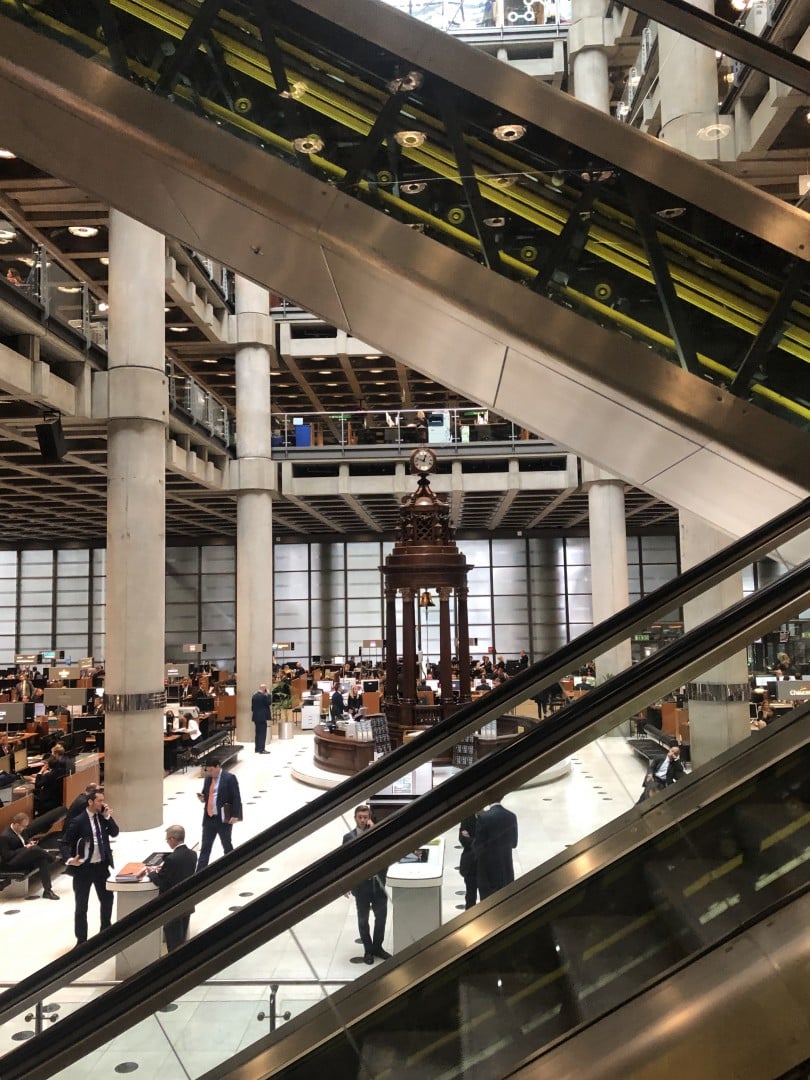 In 1799 Hamburg’s economy was in a dire situation and The City of London merchants collected a loan of £1million to be sent via ship.

Unfortunately HMS Lutine was caught in a gale in the North Sea and sunk off the Dutch coastline, the Captain, crew and all the money were lost.

Lloyd’s paid out. In full. And just two weeks after the event. It was this event that sealed their reputation as paying valid claims and having the financial might to withstand such chunky losses.

But the story doesn’t end there. In 1859, the ship’s bell was salvaged. Today it still hangs in the Rostrum in the centre of the Underwriting Room, rung on historic occasions. 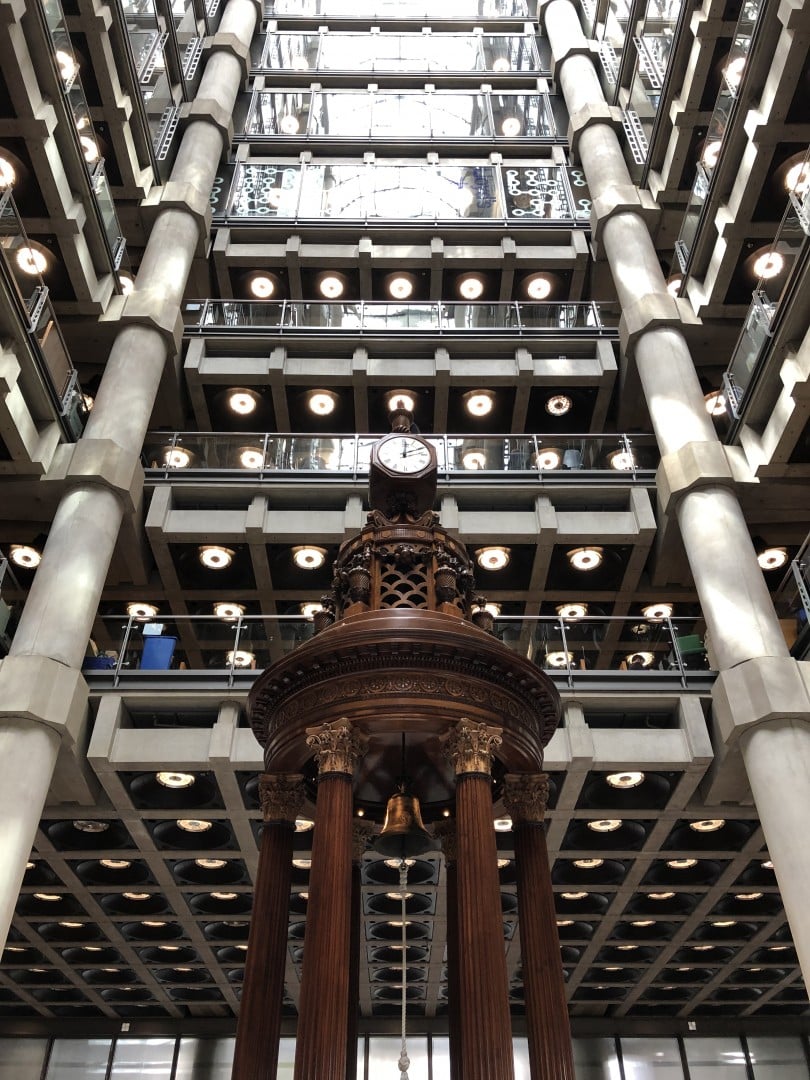 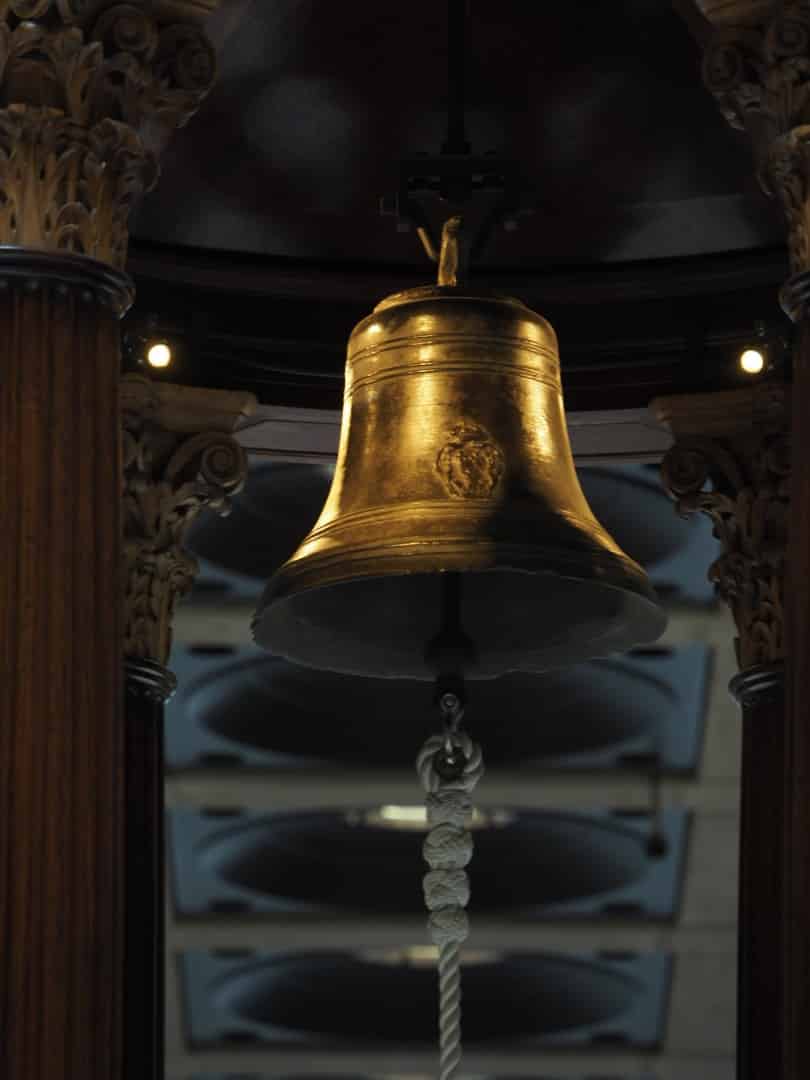 The loss book, beside the bell, details every ship lost (and therefore pay out) from Lloyd’s. The book was introduced in 1774 and entries are still written by Lloyd’s Head Waiter in quill and ink. Each day the page is turned to show what happened on any given day 100 years ago. All the loss books dating back to 1775 can be found in Guildhall Library. 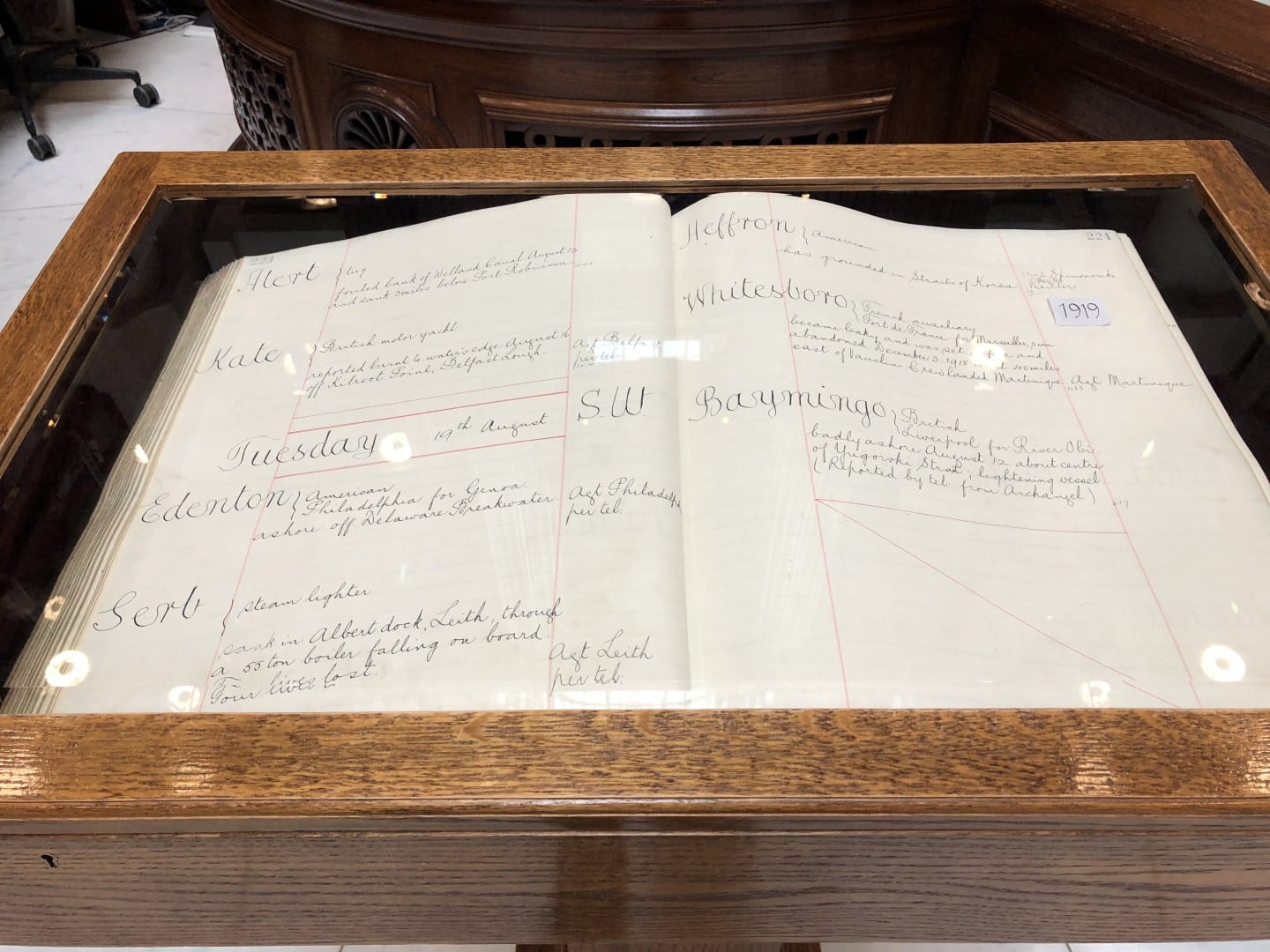 The ceiling panels deserve a second glance, their domed shape means the acoustics of a huge glass atrium are soften. It means even in the middle of the underwriting room, people can have private conversations. 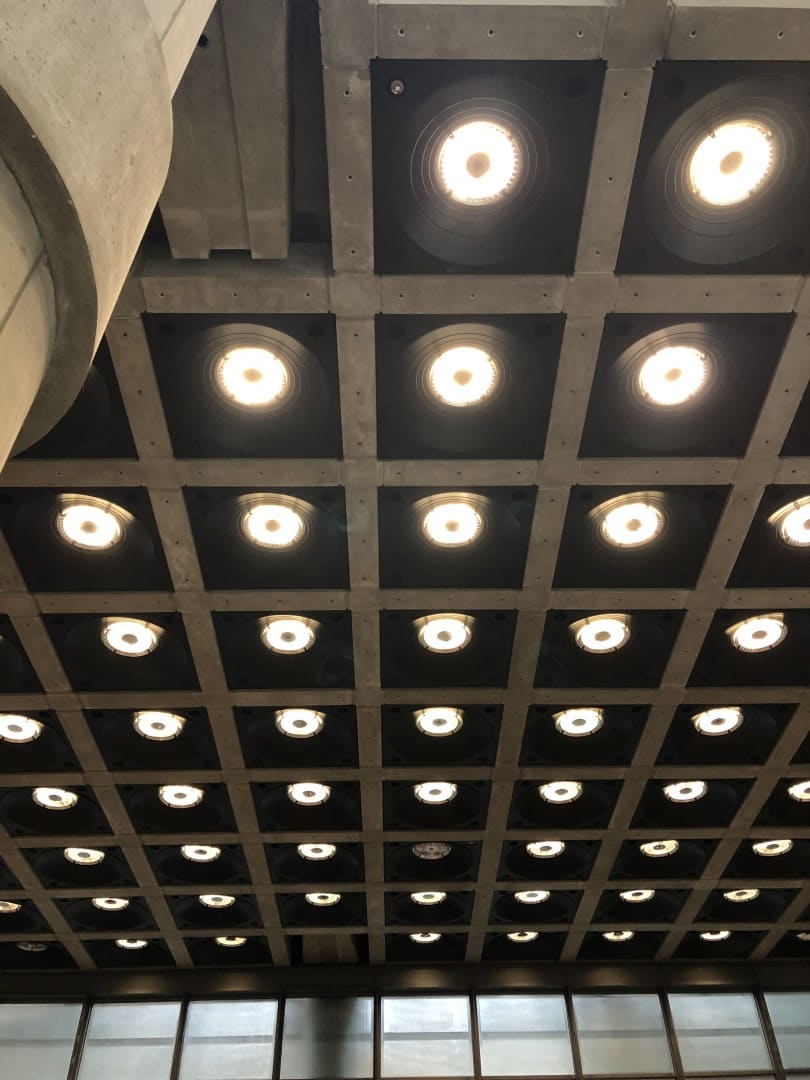 The building’s lifts don’t just offer one of the best views in the City, but were the first of their kind in the UK. They whizz up and down the the outside of the building, a joy from the inside and from street level looking up! 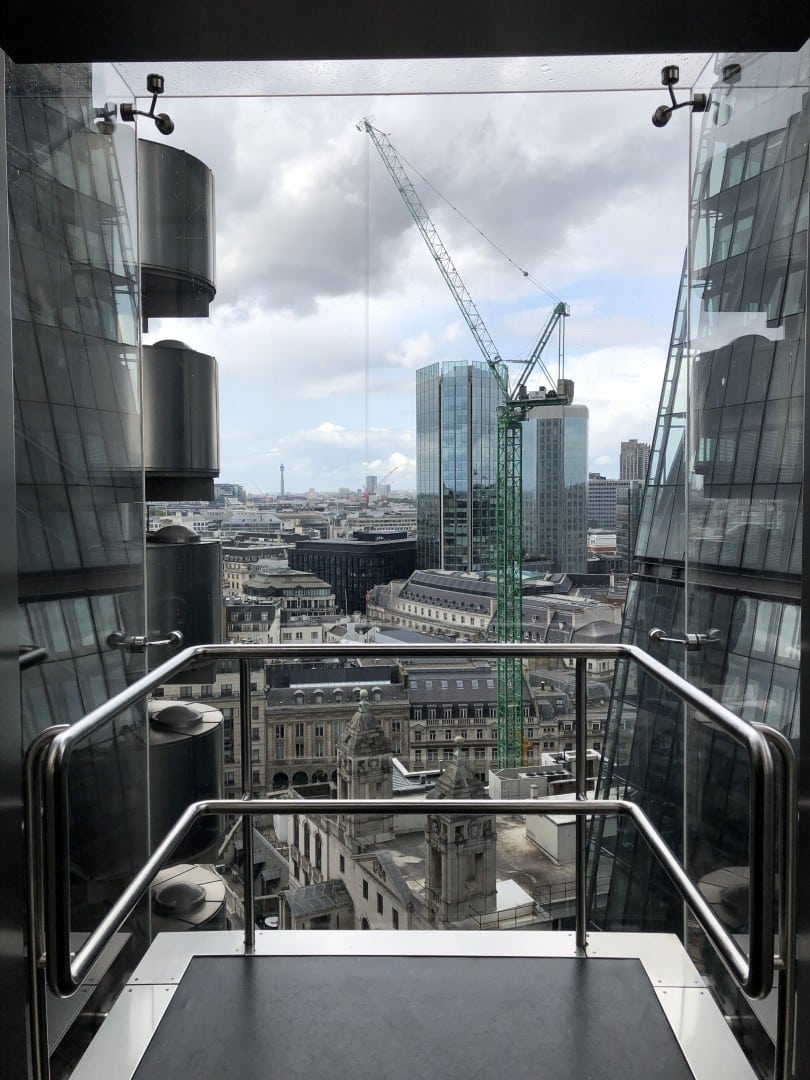 Also from the outside, these silver boxes with a porthole look odd. 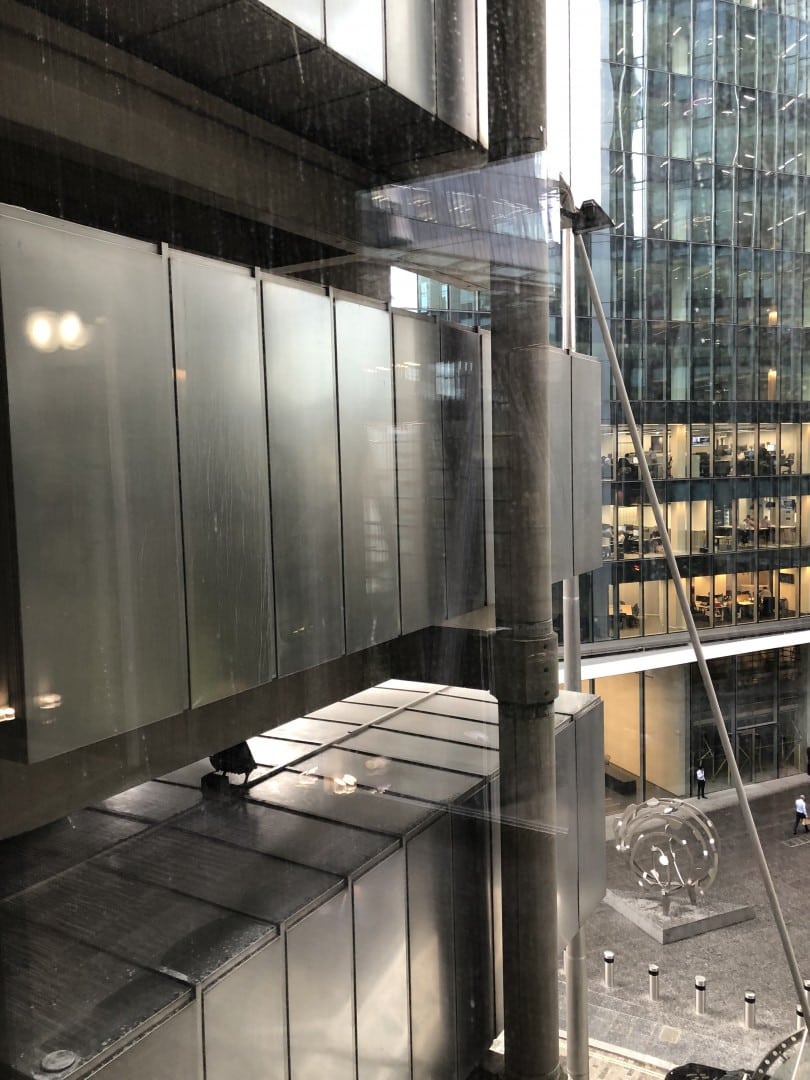 I’d always been told they were toilets, so was happy to be proved right when I got a chance to go inside… 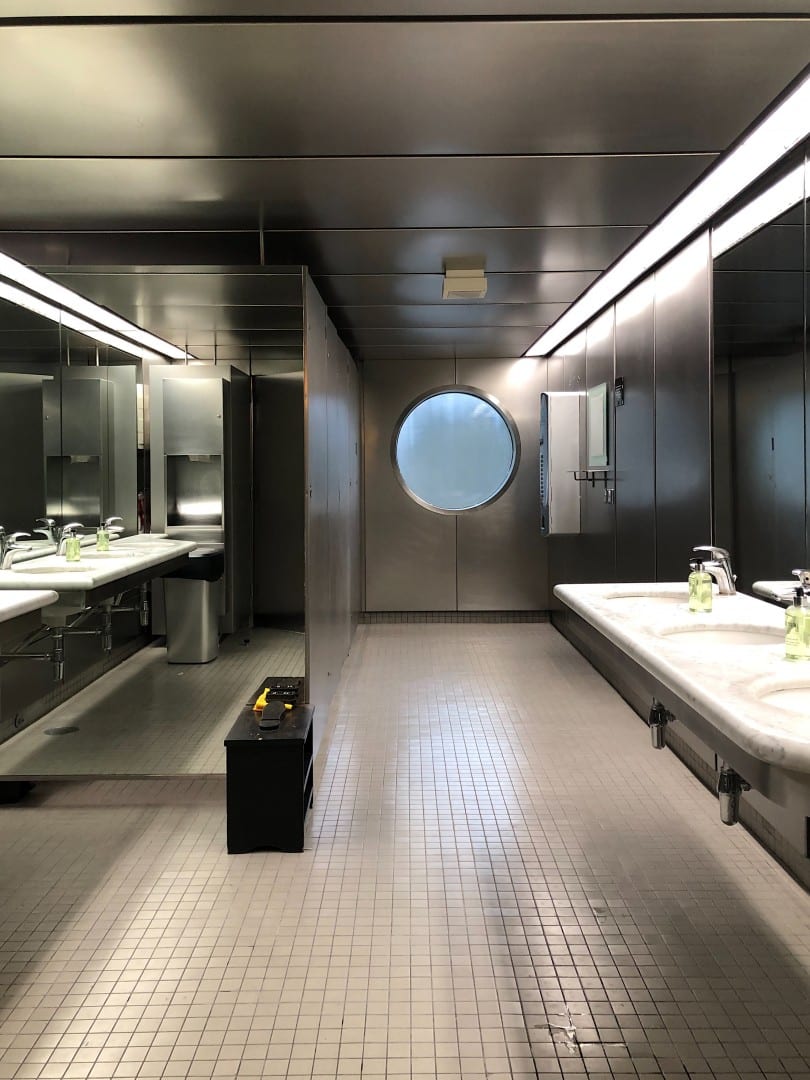 Just when you think you have a handle on the architecture, Lloyd’s throws a twist into the mix.

On the top floor is The Adam Room, originally designed by Robert Adam for Bowood House in Wiltshire c.1725. 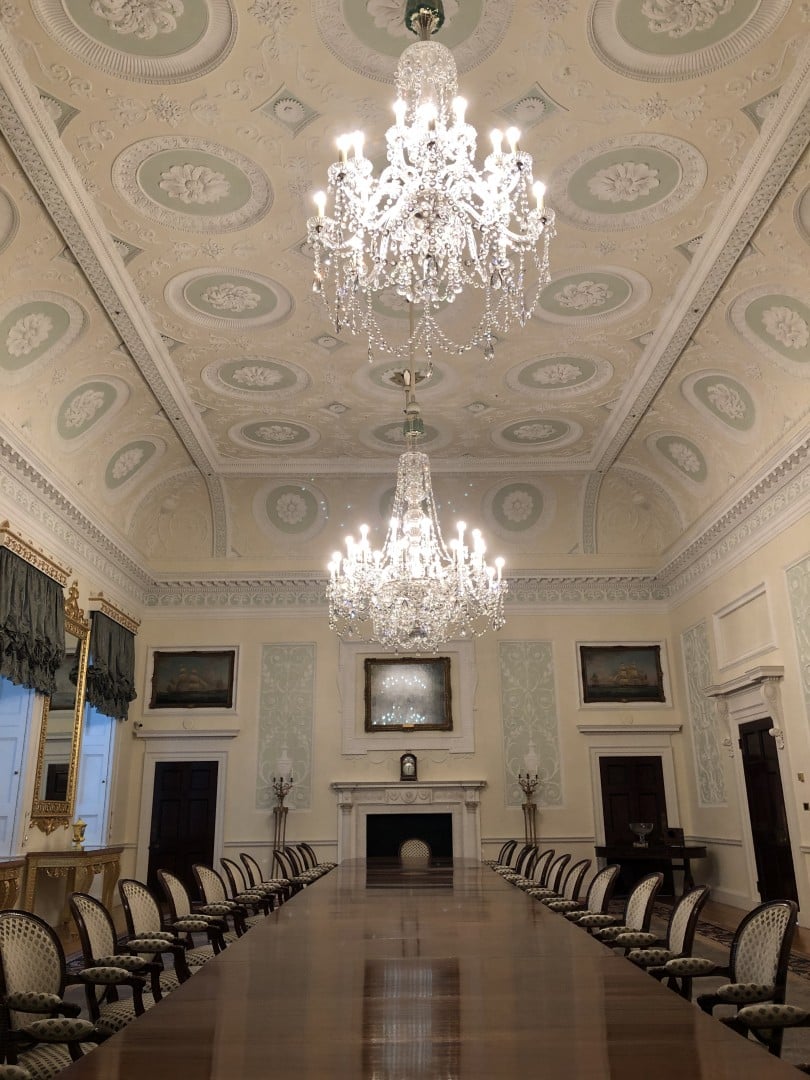 In 1956 the house was scheduled to be demolished and there was an auction to sell of the interior assets. Intending on just buying a fireplace for the Chairman’s office, Lloyd’s decided they wanted the whole room. 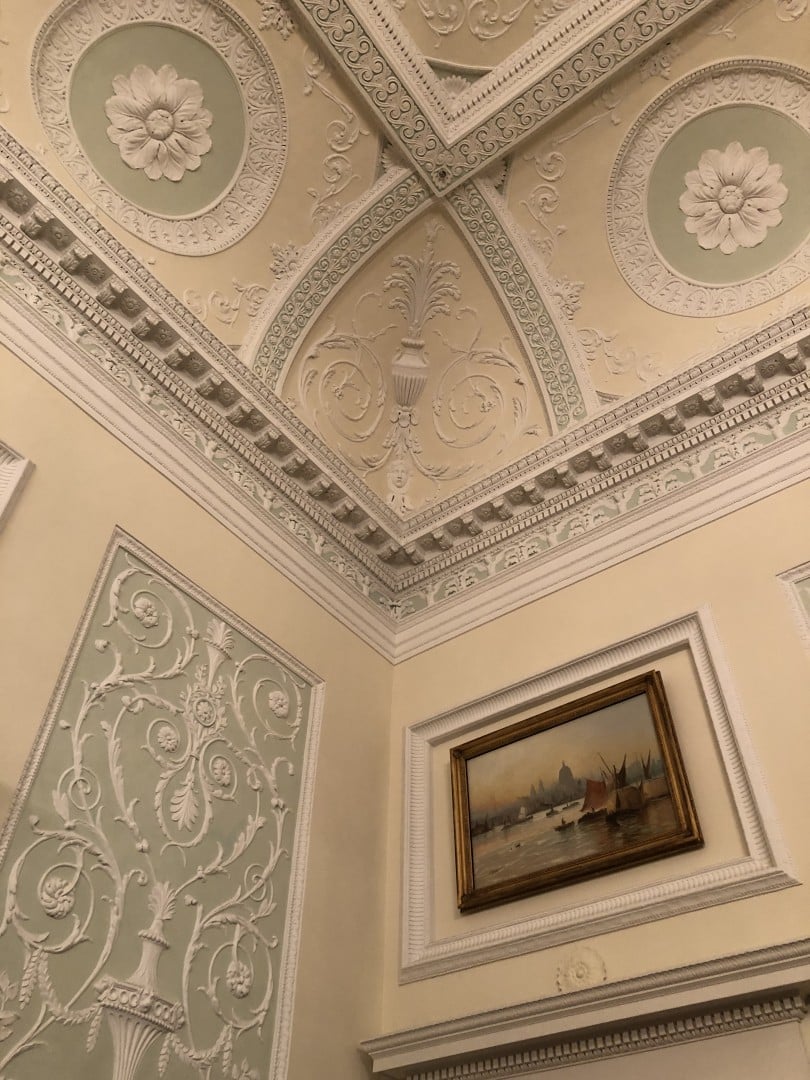 It was installed into the new Lime Street premises in 1958 then cut into 1,500 numbered pieces to be reinstalled in the new building!

I hoped you enjoyed this look inside Lloyd’s of London. Unfortunately however, Lloyd’s will not be of Open House Weekend 2019 and there were no plans to host open days when I checked with security.