The best London hotels are beautiful, historic and full of stories. So why should you only be able to enjoy the fun if you’re staying there?

Plenty have bars and restaurants where you can relax and indulge without a room key. Plus, while you’re there, it’s well worth having a look around these London hotels.

Probably the most famous of London’s hotel quirks is the delightful Kaspar whose home is The Savoy.

There are topiary depictions of the cat, but to see the real thing you have to enter the magnificently revamped entrance hall. 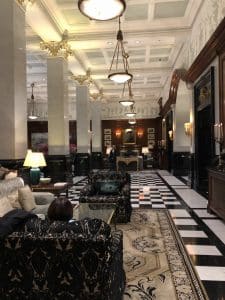 The story dates back to 1898 when diamond magnate Wolf Joel hosted a large group for dinner here. When a guest cancelled last minute the party numbered 13. For the superstitious this meant and unlucky curse ensuring the first to rise would be the first to die.

Joel shrugged off such nonsense, confidently rising first after a good meal. Upon his return to Johannesburg however, he was shot dead.

The Savoy, wanting to make sure no such thing happened again, resolved that each party of 13 would be accompanied by a staff member. When this proved awkward for dinner conversation they came up with an even better plan; 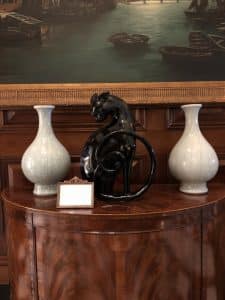 Basil Ionides (who masterminded the original Art Deco design) carved a miniature cat; Kaspar out of polished London Plane. Today it bumps up any ‘unlucky’ party up to 14. Surely the best-fed pet cat in all of London!

What would you do with £380million?

The owners of the former Government building on Whitehall Place chose to renovate a hotel, the Corinthia, which opened it’s doors in 2011.

The location is actually returning to its original purpose, it was the largest hotel in Europe when it first opened in 1885 as The Metropole. It lasted as a hotel until 1916 when it was far more useful as government offices during the First (and then Second) World War.

But the showpiece is in its entrance lobby, a huge baccarat chandelier made of 1,001 crystal pieces. 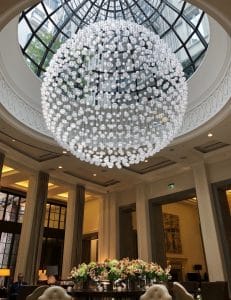 Occupying the landmark Port of London authority building on Tower Hill, the Four Seasons of Ten Trinity Square opened in 2018.

Thankfully, they kept some of the stunning original features of the 1922 building, including this stunning lift shaft which allows for the most aesthetic opportunity to look up! 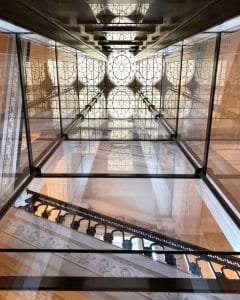 Another repurposing of a grand old London landmark is The Ned, a hotel and private members club. Based in the former Midland Bank HQ, the building was finished in the 1920s, designed by Edwin Lutyens whose nickname ‘Ned’ gives it its name. 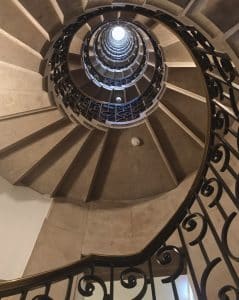 Lutyens designed this 15 floor spiral wonder for the original banker inhabitants, but today it’s part of the staff area, allowing them easy access to all floors. It’s not actually open to the public, but if you ask nicely then a member of staff just might point you in the right direction!

One of the four great railway hotels, the Great Eastern Hotel outside Liverpool Street was built in the 1890s, but with declining rail travel was closed in 1996. Today it’s part of the Hyatt brand, completely restyled to reflect their location at the gateway of The City and Shoreditch. One thing they couldn’t alter though, was the grade I listed temple. Found behind a hidden wall of the hotel in 1912. 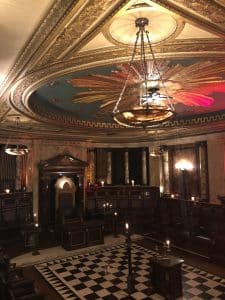 Covered original Italian marble the room still hosts lodge meetings of freemasons, including an Italian group which visit every 3 months. Sadly, as no freemason was there to give us any more information the rest was left as a mystery, reflected in the company slogan etched above the room which translates as ‘see all, hear all, tell nothing‘. 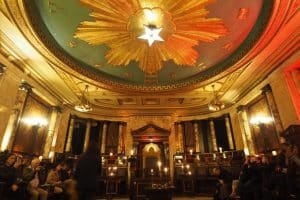 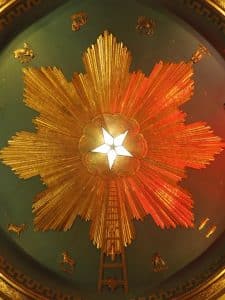 They host a variety of events here (from yoga to hot tub parties!) But if it’s not in use the staff are happy to give you a look!

The current St Pancras Renaissance reopened in 2011 and is part of The Marriot chain. The original first opened between 1868-76, designed by George Gilbert Scott in this fabulously over the top Gothic Revival style. But inside there sits something (if even possible!) More lavishly beautiful. 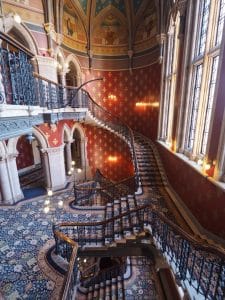 The Grand Stairs sweep guests and residents majestically up to their rooms and suites. It’s surely the best staircase in all of London? 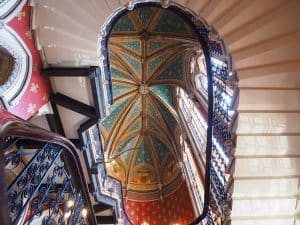 Oh and if you’re thinking it looks familiar, It is the same iconic staircase that featured in the Spice Girls 1996 ‘Wannabe’ music video.

The County Hall opposite Parliament used to house the London County Council and then Greater London Authority for 64 years until 1986. Today the Marriott hotel has retained some of the original features but the most intriguing is a fireplace from the former Lindsey House at 59-60 Lincoln’s Inn Fields. 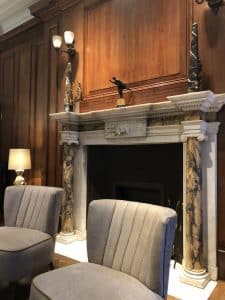 Built in the 1640s, the fireplace probably dates from the 1752 when alterations to the house were recorded. It features a marble relief of Aesop’s fables of the Bear and the Beehive, whose moral is that with great numbers the seemingly weak can be strong. 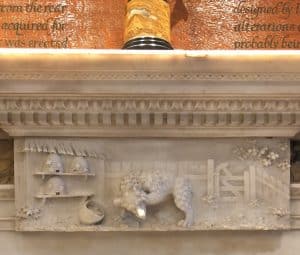 The house was demolished in the early 1900s when the area was in upheaval for the construction of Kingsway. One reason the fireplace may have been saved is a political one. A famous resident of Lindsey House was Spencer Perceval (from 1791-1808) he is famous for being the only Prime Minister ever murdered; assassinated in the House of Commons lobby on 11 May 1812. Strange to think that a part of his home now overlooks the very spot of his execution.

Formerly the Russell Hotel, the Fitzroy and Kempton opened this year and revives the fabulously OTT facade on the corner of Russell Square.

Designed by Charles Fitzroy Doll (the extravagance creating the phrase “all dolled up”) it wasn’t the only famous thing Doll designed.

The original hotel restaurant was almost an exact copy of the fateful Titanic’s first-class dining room. Today it’s the site of their ‘Neptune’ seafood restaurant, seriously.

But another curious find can be found up the stairs on the right of the entrance hall. 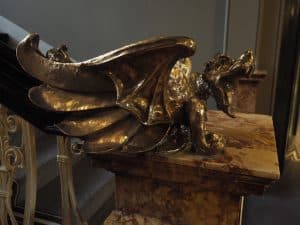 One of a pair, this is ‘lucky George’ whose twin (presumably the ‘unlucky’ one) lies at the bottom of the Atlantic Ocean.

When the building was knocked down and rebuilt in 1893 it was under the same design helm as Harrods. Harrods, you may know, boasts the oldest escalator in London. But Claridge’s was given a little eccentric technology too; a lift. 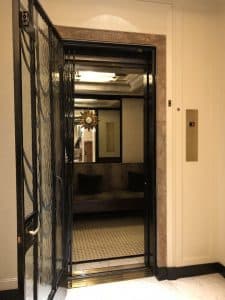 Install by OTIS in the 1890s this claims to be the oldest working lift in London, still operated by an attendant who has to slide the diamond-shaped grille across each time.