in London, Look Up London
2 Comments

Happy International Women’s Day everyone! In London, we’re lucky to be surrounded by public sculpture. But did you know that across the UK only 2.7% of statues show women who aren’t either mythical or royalty?

Public art can be contentious; like the debate surrounding whether we should erect one to Margaret Thatcher. Or how about the amount of time its taken to get a women represented in Parliament Square?

But if you keep your eyes open, there are plenty of places in London where we can spot inspiring women. 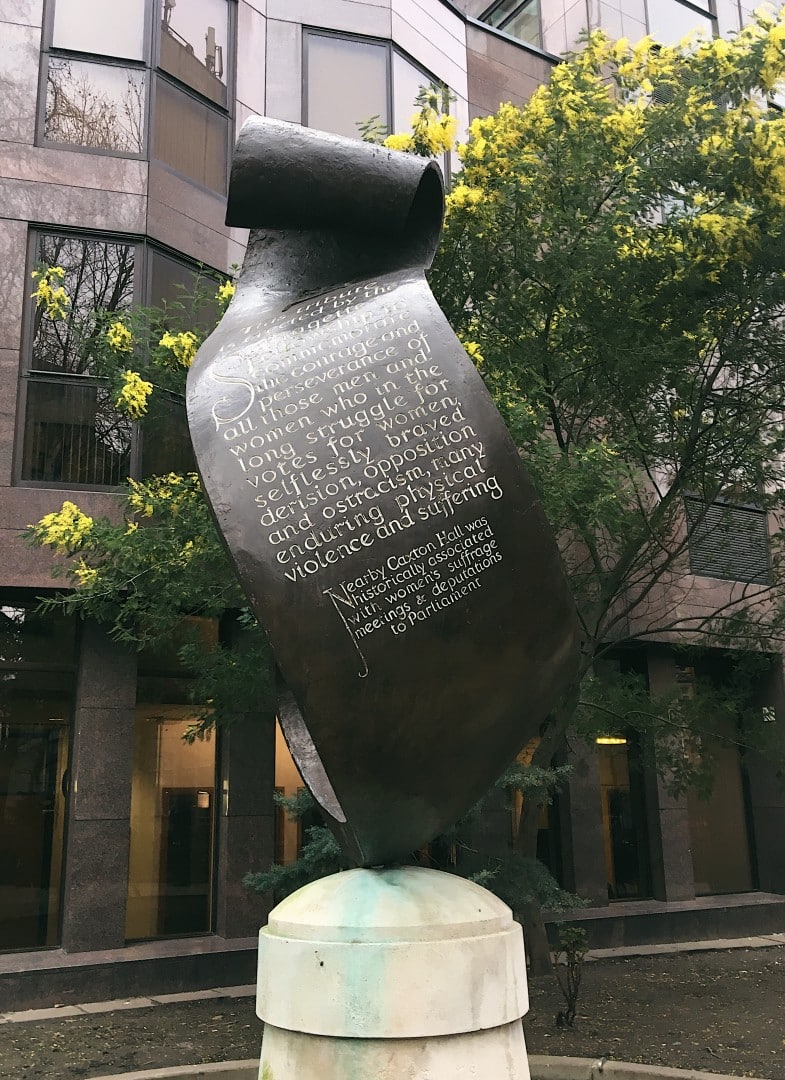 Tribute to the Suffragette Fellowship, established in 1926, to preserve the history of the fight for women’s right to vote. Unveiled in 1970 by Lilian Lenton, fellowship treasurer and former suffragette. Sculpted by Edwin Russell, find it in Christchurch Gardens.

So here are some of my favourite London women, commemorated on our streets in monument-form, celebrated for their achievements. I’ve tried to include as many as I can, but this is by no means a complete list. If I’ve missed anyone, please do let me know! 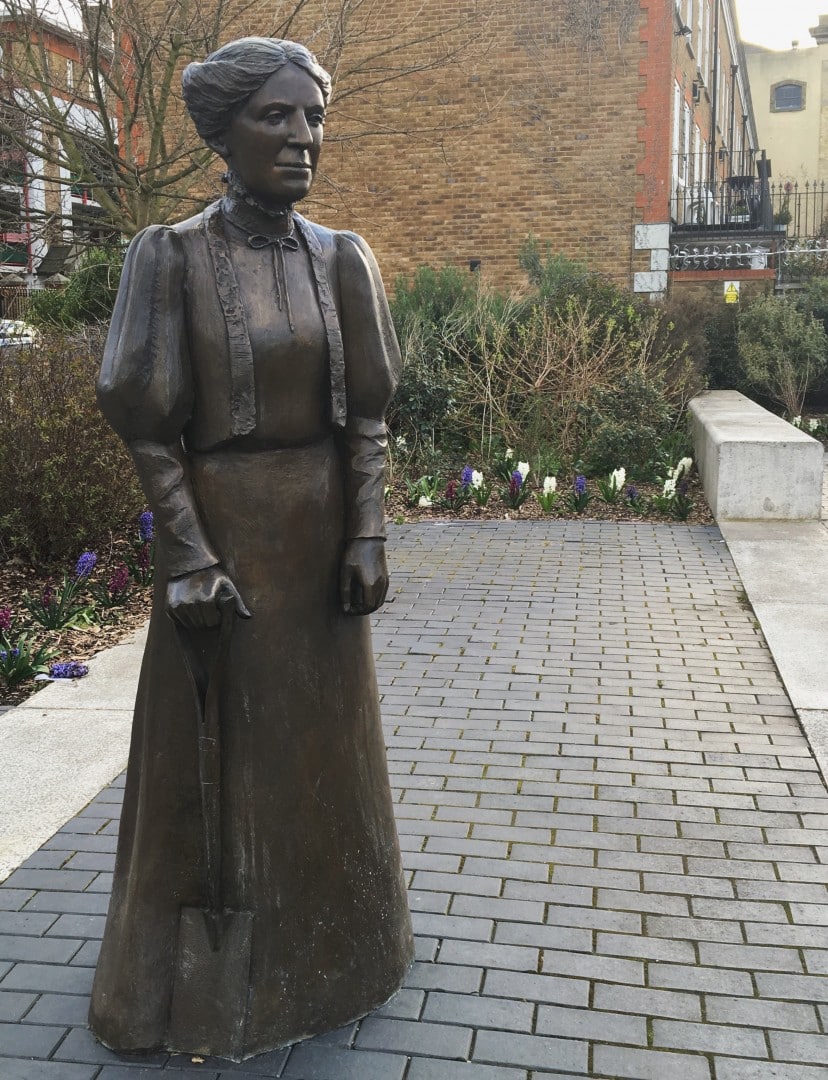 Part of a curious set of sculptures along Bermondsey Wall East, Ada Salter (1866-1942) is commemorated as a social reformer and President of the Women’s Labour League; founded 1906 to promote political representation of women. A history of firsts; she was one of the first women councillors in London, the first women mayor in London and the first Labour women mayor in the British isles! Her husband worked as a doctor in Bermondsey and she was also a social worker, running clubs for the ‘roughest and toughest’ girls in the area. 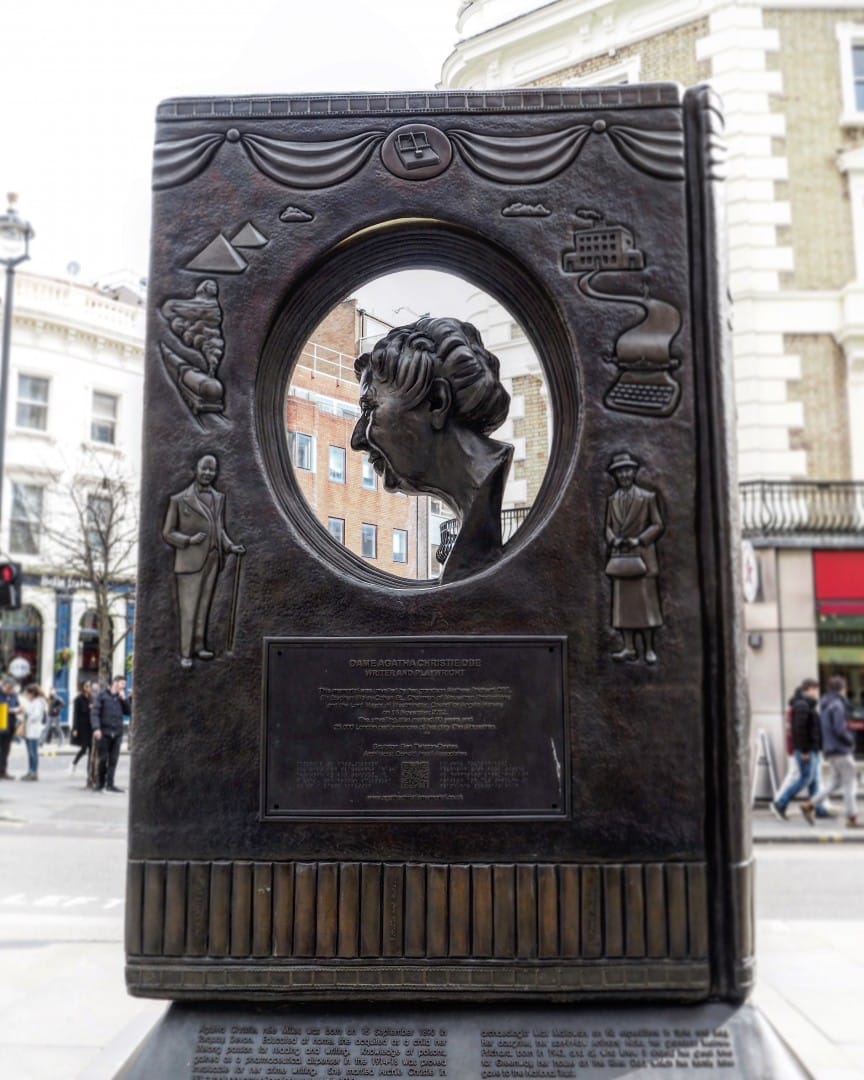 This also happens to be one of a my favourite sculptures in London, unveiled in 2012 to celebrate the 60th anniversary of The Mousetrap. All over the sculpture are little emblems representing Christie’s novels and stories which have captured the imagination of millions. She lived from 1890 -1976, writing 66 detective novels alone, and you can spot the little cheese-laden mousetrap right at the top!

Ok, not the best sculpture perhaps, but this bronze Amy, who died aged 27 in 2011, has become a site of pilgrimage for music fans. Though she was never out of the limelight because of her addictions, the Brit, Grammy, Ivor Novello and MOBO award-winning artist was undoubtedly a uniquely talented musician, songwriter and singer. 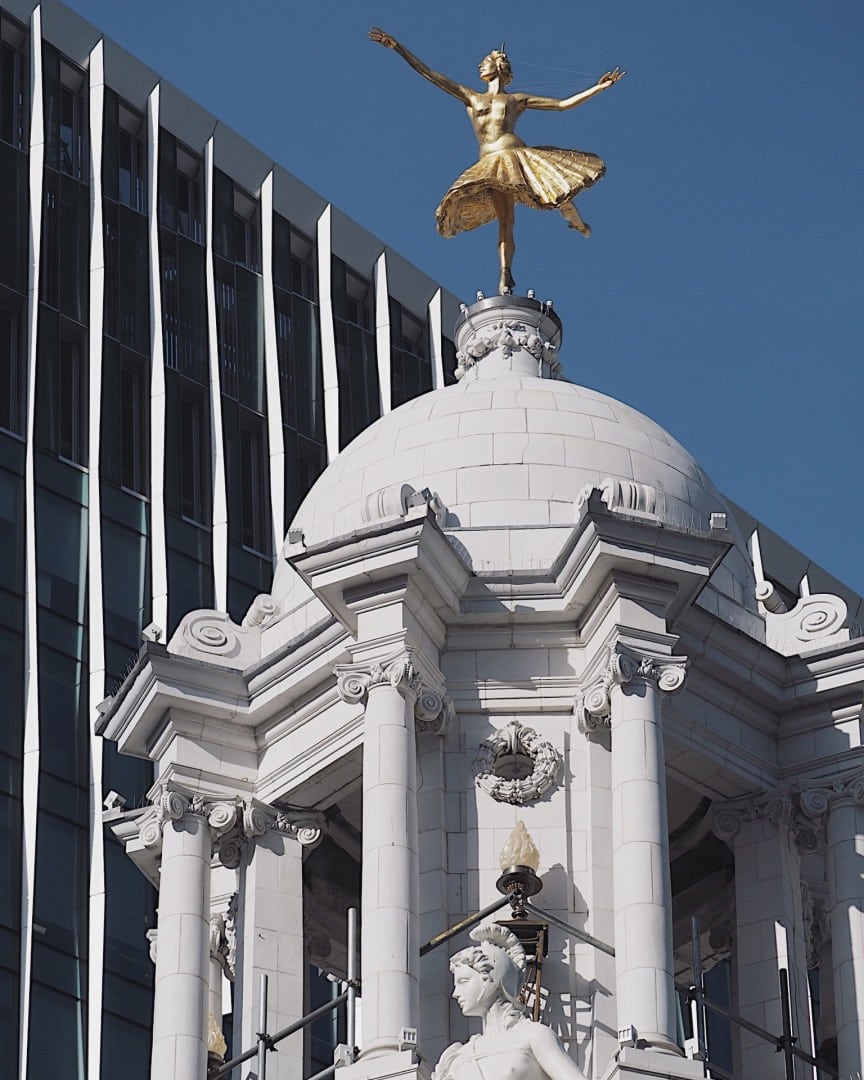 Right at the top of Victoria Palace Theatre you’ll spot a golden Anna Pavlova, the famous Russian ballerina (1881-1931). She created the role of The Dying Swan performing it over 4,000 times and was the first ballerina to tour the world. The 1911 owner – Alfred Butt – had produced her first London performance and commissioned the sculpture to adorn his cupola. Sadly for Butt, Pavlova was apparently unimpressed at the statue, refusing to ever look at it. 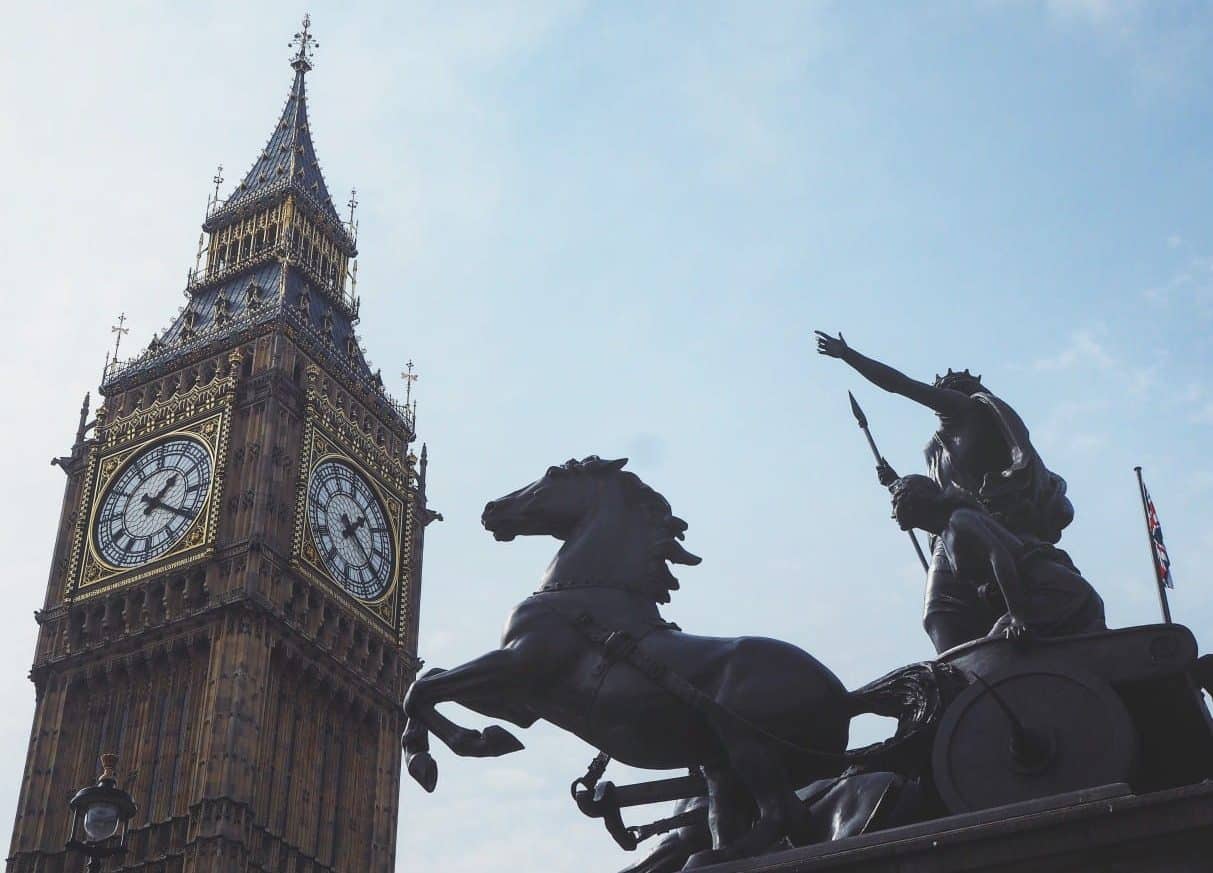 It always seems a bit strange that Londoners have erected a statue to the women famous for destroying their City c.60 AD. But given it was almost 2,000 years ago, all is forgotten. Boudicca, the warrior Queen of the Iceni tribe, commands her chariot (with no hands!) facing down the heart of London’s political power; the Houses of Parliament. 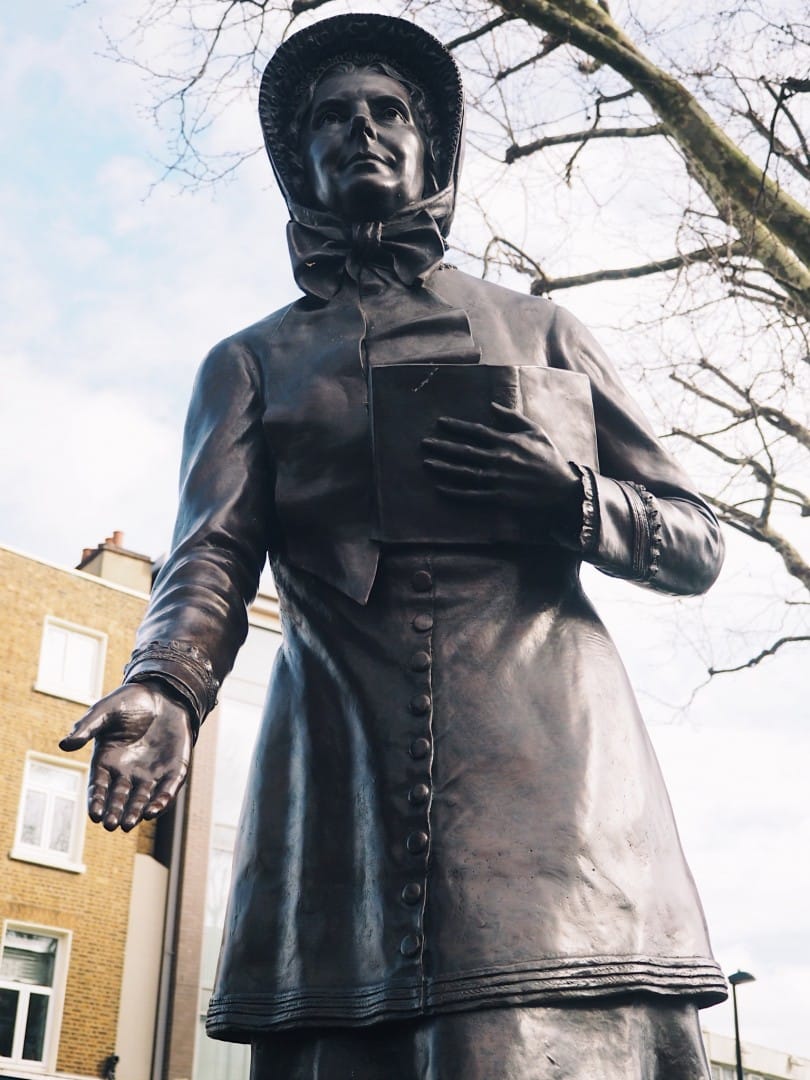 You can see two versions of this sculpture in London. The one above is in Denmark Hill while its twin can be seen on Whitechapel Road. Catherine Booth was born 1829 and was raised a devout evangelist. Determined that women should have an equal role in the Christian ministry she was an avid reader, writer and speaker. At a time when most people felt it was ‘unfeminine’ for women to preach, she wrote Women’s Right To Preach The Gospel in 1859. She converted many people and even changed her own husband’s opinions about women preachers. She was married to William Booth, founder of the Salvation Army and is therefore referred to as “The Army Mother”. 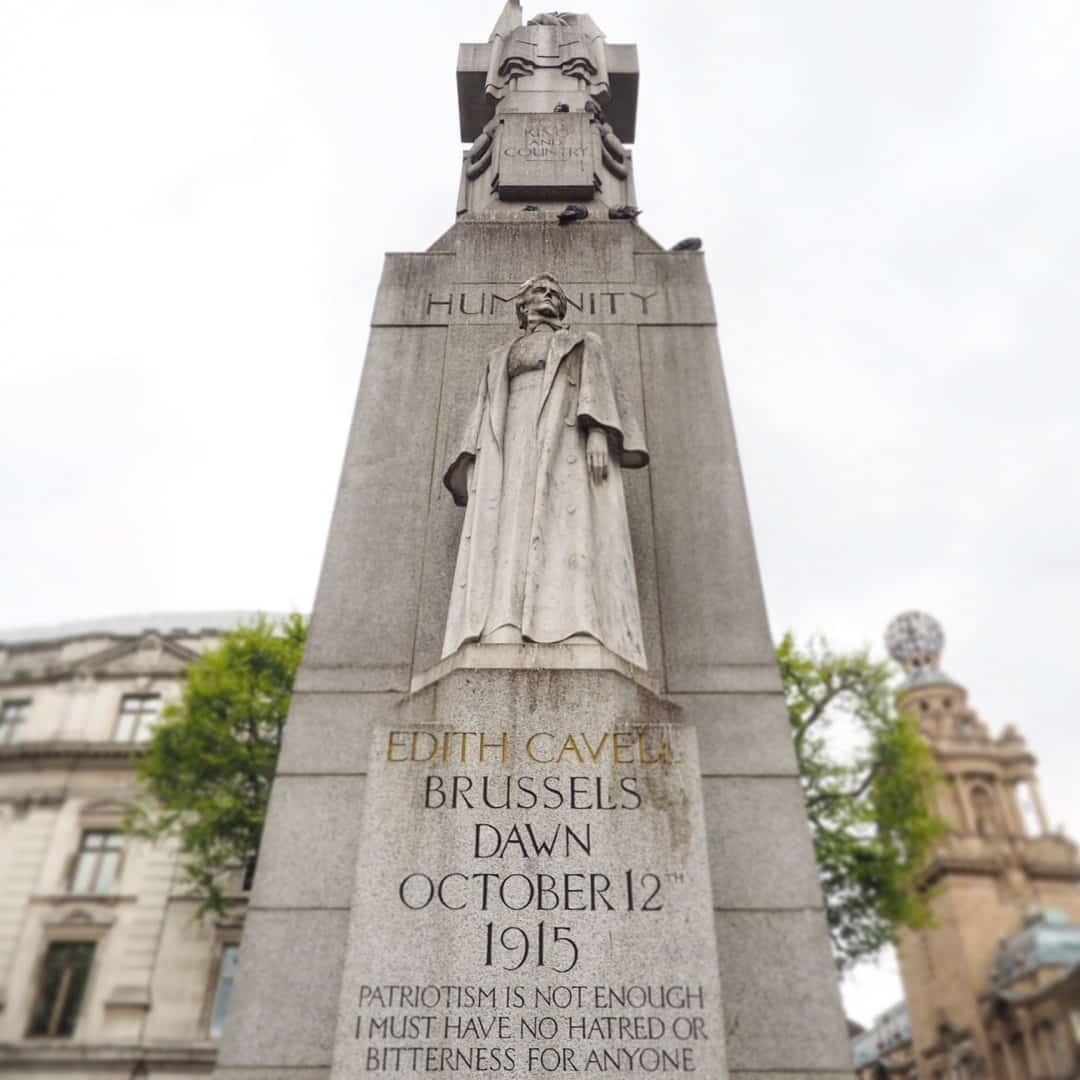 Edith Cavell was executed by German firing squad in Brussels during WWI. He monument outside the National Portrait Gallery is specific; Dawn. October 12 1915. She was a British nurse but is celebrated with healing soldiers on both sides and helping over 200 allied soldiers escape from German-occupied Belgium.

“Patriotism is not enough. I must have no hatred or bitterness for anyone.” – Edith Cavell

On 24 April 2018 a statue of Millicent Fawcett was unveiled in Parliament Square, making her the first women to stand in that historic centre of politics and power.

Designed by Gillian Wearing OBE, Millicent Fawcett holds a banner declaring “Courage calls to courage everywhere”. To read more about Millicent Fawcett, you can view my full blog on the unveiling here.

A leading figure in the fight for Women’s suffrage, Pankhurst was the founder of WSPU (Women’s Social and Political Union) whose slogan was ‘deeds not words’. Irritated by the lack of progress through traditional legislative routes she encouraged women to rise up and incited violence; paintings were slashed, bombs were planted and shop windows were smashed. This year marks 100 since some women were granted the vote in 1918. Of course violence – in theory – is never an answer. Did it make a difference? Would it have happened without Pankhurst’s call to arms? We’ll never truly know, but we can find her statue in Victoria Tower Gardens, beside the Houses of Parliament.

“The argument of the broken window pane is the most valuable argument in modern politics.” – Edith Cavell 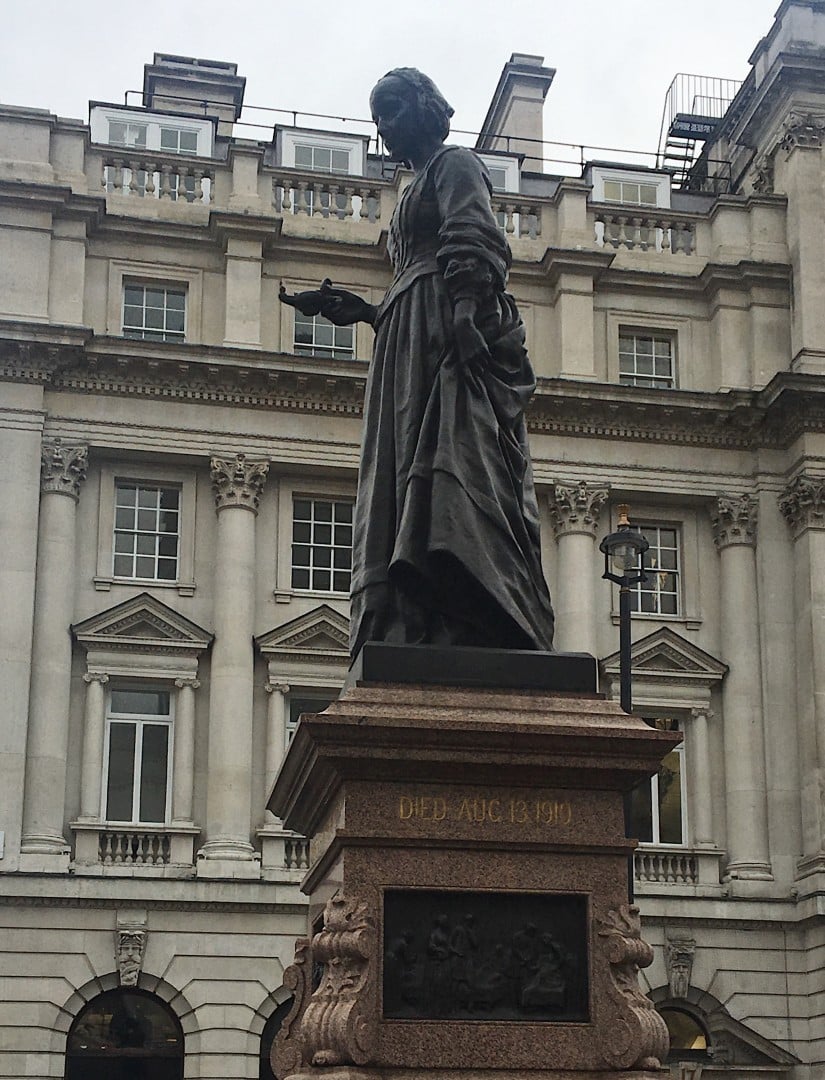 Mother of modern nursing, Florence Nightingale is the world’s most famous nurse. The Lady with the lamp can be found on Waterloo Place in front of the memorial to the Crimean War in which her principals of cleanliness and quarantine zones saved many lives.

Her genius was not actually in medicine, but in statistics. She persuaded Queen Victoria to set up an investigation into the army’s health, establishing that 16-18,000 deaths were caused by poor sanitation. Publishing a diagram for the best visual effect of this shocking find, Nightingale got the support needed to change the way the army hospitals were run, fatalities dropped by 99% in a year. 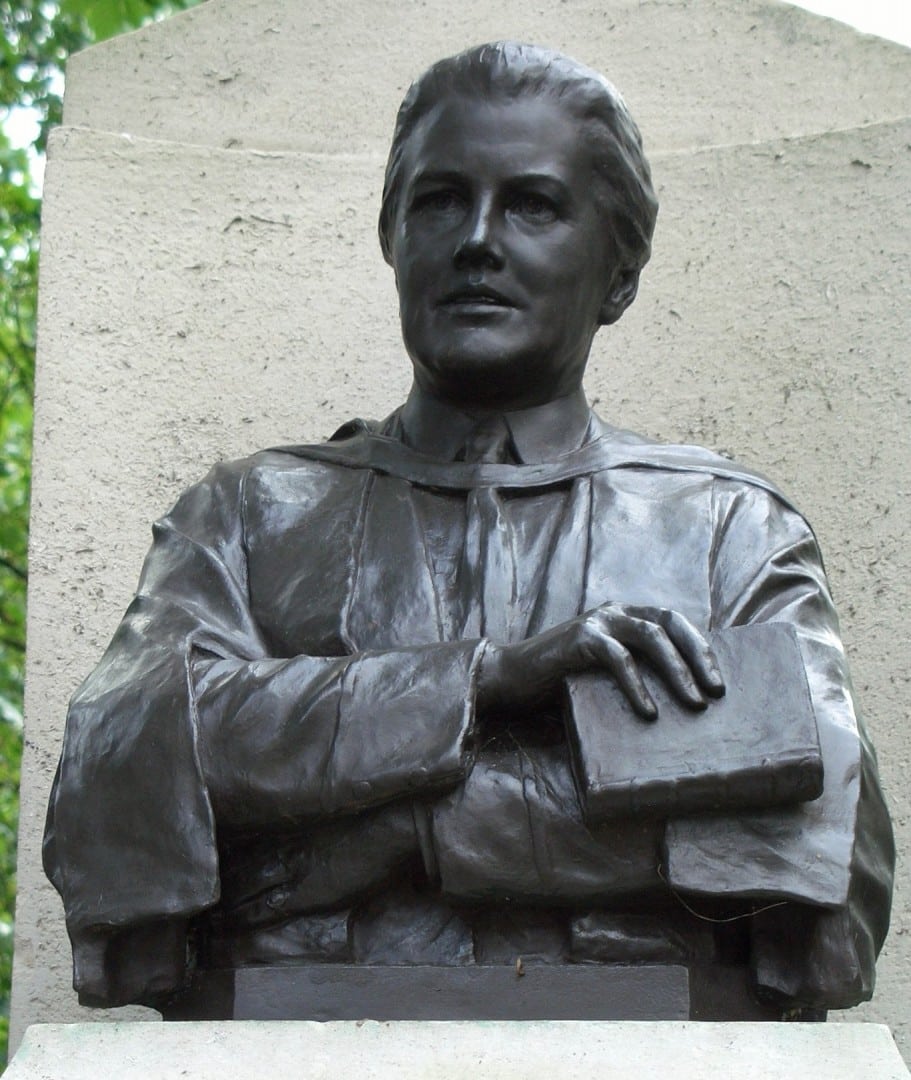 There’s no shortage of medical history in Bloomsbury, but one name that often gets forgotten is Louisa Brandeth Aldrich Blake. Born 1862 she was Britain’s first female surgeon and the first surgeon to operate on cancers affecting the cervix and rectum. As dean of the London School of Medicine For Women, she also worked tirelessly to encourage fellow women to take up the profession. Her bust can be found in Tavistock Square.

Feminist and social reformer, Macdonald established the first trade schools for girls in 1904, encouraging projects where other women could train for skilled work. Carved around the sculpture’s plinth is one of London’s loveliest epitaph’s ending with; She quickened faith and zeal in others by her life and took no rest from doing good. She’s also shown surrounded by happy children, having six of her own with husband Ramsey MacDonaled the Labour politician. 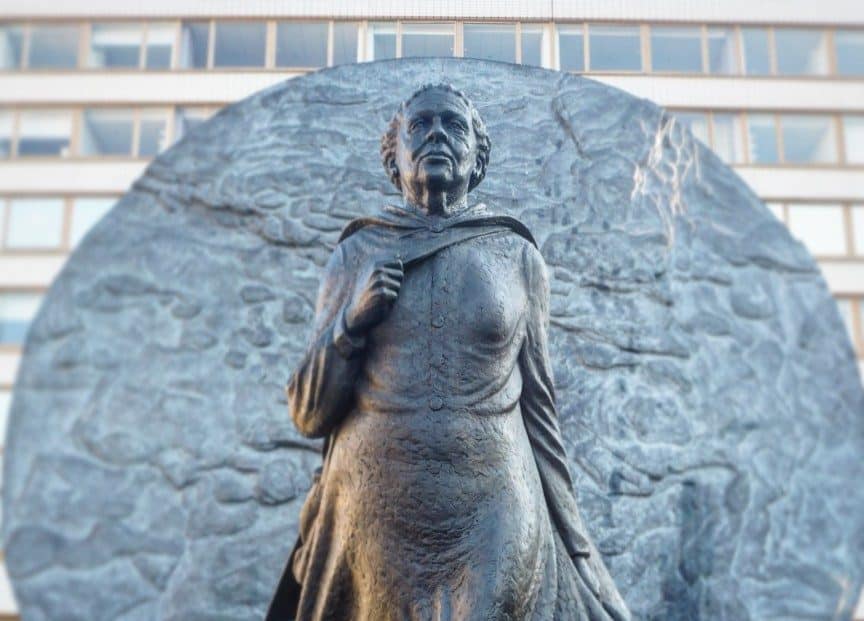 2016 marked a London first; the first statue of a named black woman was unveiled and it was Mary Seacole outside St Thomas’ Hospital, Lambeth. A contemporary of Florence Nightingale, Seacole was also a nurse but favoured more traditional methods and was adored by the soldiers she nursed. Read more about the sculpture and Seacole’s life here. 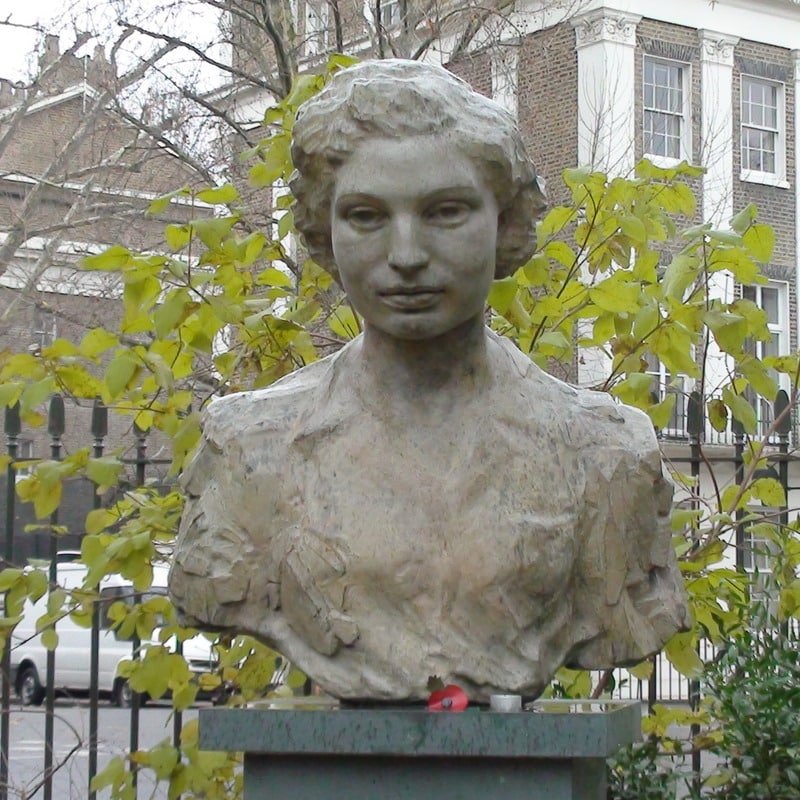 Photo from London Remembers a fantastic site dedicated to recording all London memorials.

The British secret agent was the first female radio operator sent into Nazi-occupied France in June 1943. Her job – part of the Special Operations Executive (SOE) – was to relay messages back to London while evading capture. In October she was betrayed and turned over to the Gestapo. She was kept in chains and solitary confinement, tortured, but yet refused to reveal any information. In September she and three other female SOE agents were shot at Dachau concentration camp. Her bust – the first stand-alone memorial to an Asian woman in the UK – can be found in Gordon Square, Bloomsbury.

The most renowned actress of the 18th century, Siddons was best known for her portrayal of Shakespeare’s Lady Macbeth. The contemporary essayist William Hazlitt described her as ‘tragedy personified’. Her statue, nonchalently seated in Paddington Green, is based on the famous portrait of her by Joshua Reynolds and can be found in Dulwich Picture Gallery. When the statue was installed in 1897, Sir Henry Irving – who unveiled it – pointed out that it was the first statue of an actor in London (if you didn’t count Shakespeare). 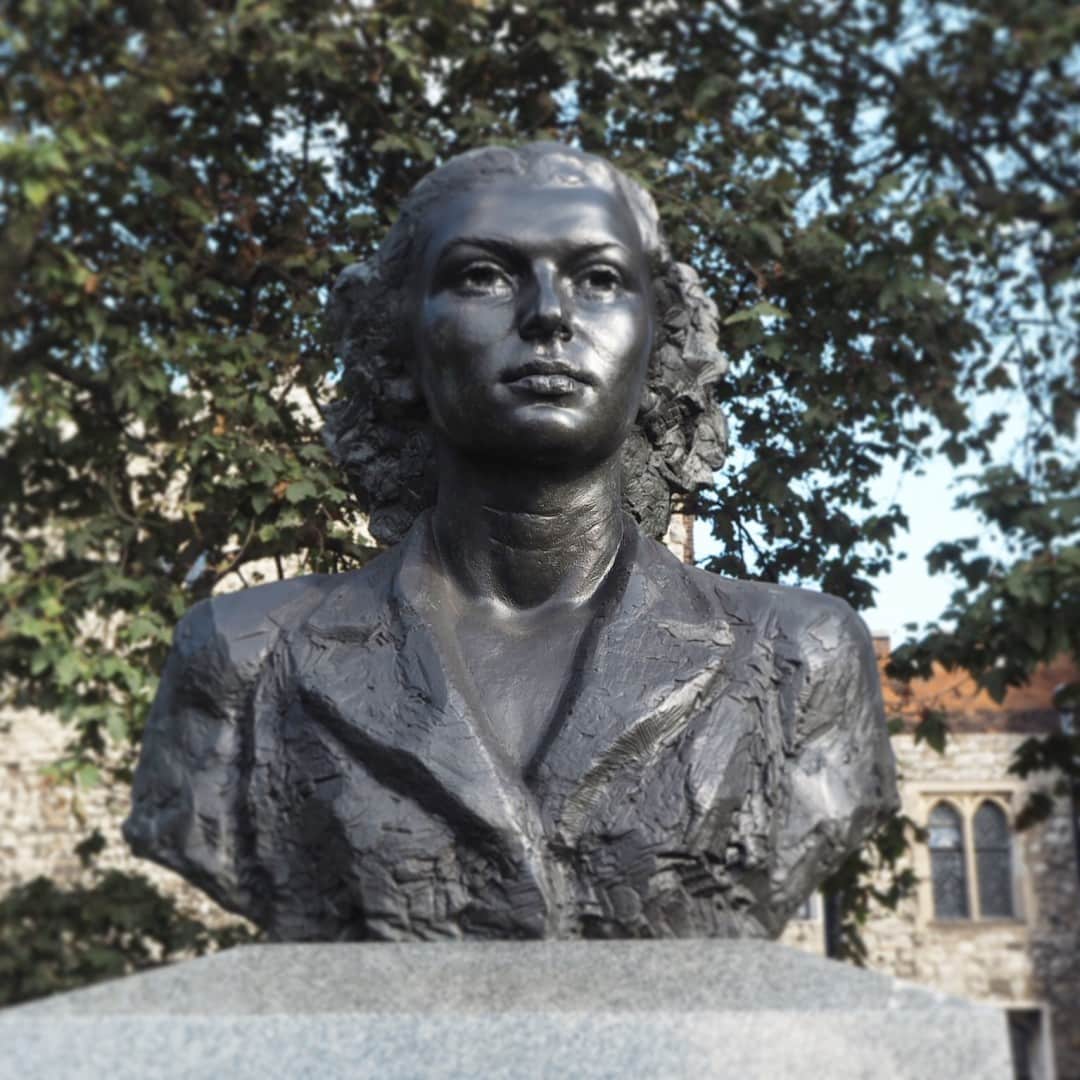 Another SOE operative remembered in London is Szabo, whose bust is overlooks the River Thames and Houses of Parliament. Born in Stockwell (there’s a plaque on Burnley Road) Szabo, like Khan, was captured an executed in Germany. On the plinth of her statue it reads; “In the pages of history their names are carved with pride.”

Considered as one of the greatest British writers, Woolf’s novels examined the anxieties of post-WWI society. A born-and-bred Londoner, she was also a member of the Bloomsbury Group, a loose collection of writers and artists who challenged the way we considered sexual relationships, politics and art itself. It’s fitting then, that her bust is in Tavistock Square, Bloomsbury.

“For most of history, Anonymous was a woman.” – Virginia Woolf 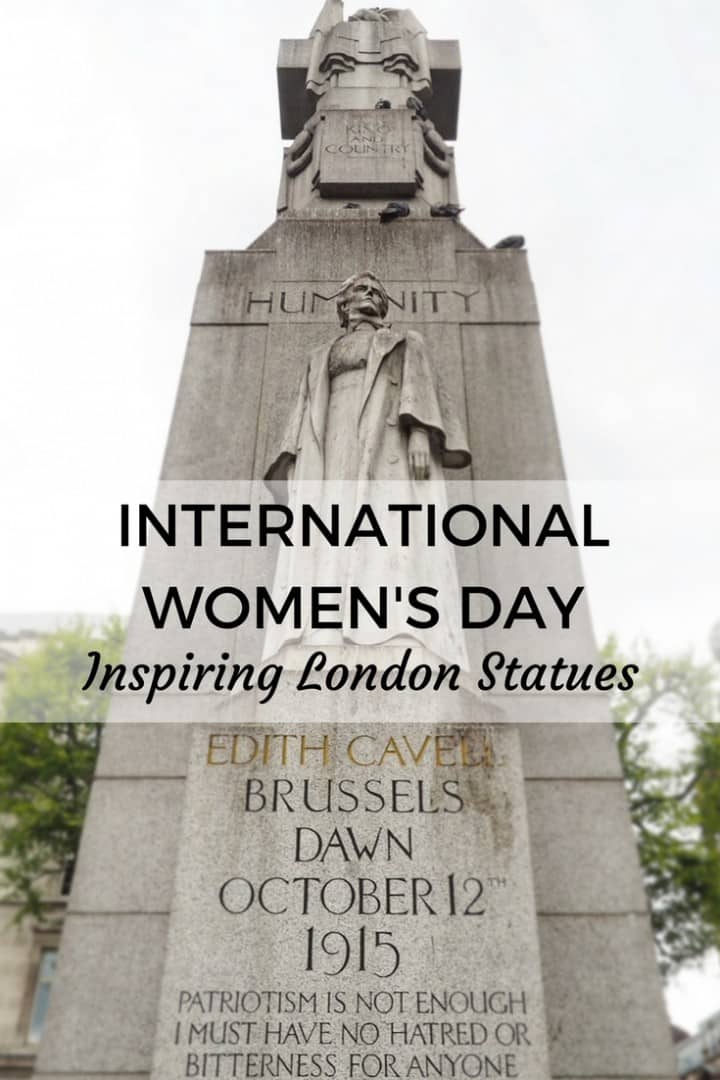