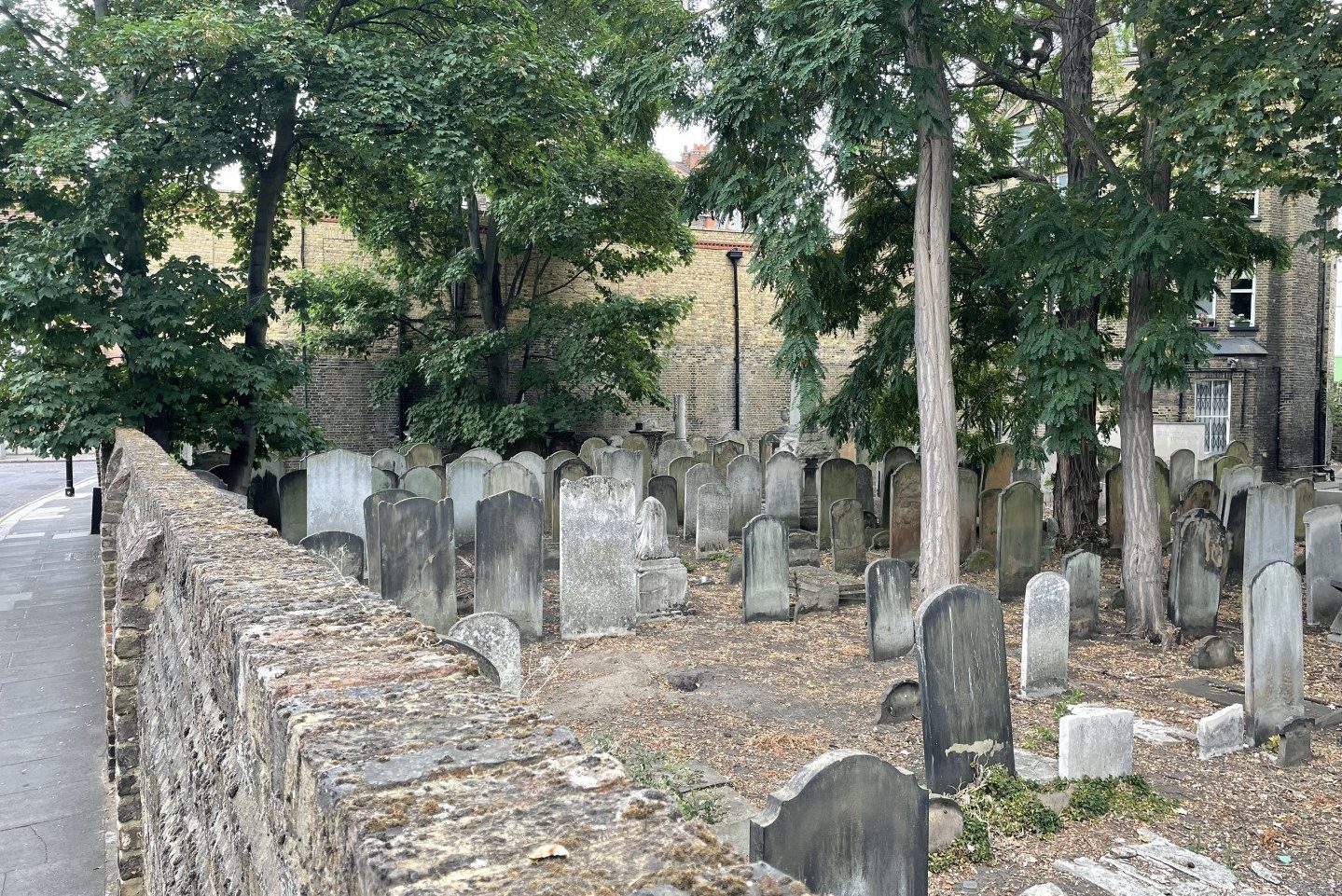 Recently I’ve been spending a bit of time researching private walks in Kensington and Chelsea. As such, one of the wonderful little historic gems I’ve stumbled across is the hidden Jewish Cemetery on Fulham Road.

While taking a picture of Sokol Books (more on that later) I saw that google maps mentioned a Jewish Cemetery. Eager to have a look, I was deflated upon discovering that it’s totally sealed off from the public behind a 6ft wall.

Now, unless you’re very tall (or have sat on the top deck of a bus down Fulham Road) you’re unlikely to ever notice that behind this wall is a cemetery.

However, as luck would have it, a friendly builder let me borrow his step ladder and voilà, I managed to get some pictures!

In 1815 this site was purchased for use as a burial ground by the Western Synagogue, now based in Marble Arch, who paid £400. The Western Synagogue was founded in 1761, making it one of the oldest Ashkenazi Synagogues in the country and the first in Westminster.

It’s only a small site, around an acre, and contains around 250 graves. The site closed to new burials in 1885 but continued to allow burials into reserved graves until 1910.

Soloman Hart was the first Jewish member of the Royal Academy. He was born in Plymouth, in 1806, to a fellow engraver and would go on to become a celebrated painter and engraver himself. One piece – which he described as “the best watercolour I’ve ever done” is in the V&A collections. You can view it here. He died in 1881.

Simon Waley Waley (it seems his middle name was a repeat of his surname) was born in Stockwell, 1827. A very talented musician, he began composing from a young age and published his first work; L’arpeggio (for piano) when he was around 19 years old and would often perform with the Amateur Musical Society. For work was a leading broker at the London Stock Exchange and a prominent figure in the community at a time when the Jewish community was campaigning for an end to civil disabilities. You can read more about him here.

Herschell Filipowski emigrated to Britain in 1839 having been born in the Russian Empire c.1817. As a child he was a gifted linguist, speaking his native Yiddish but also able to have conversations in a staggering amount of other languages; Polish, Latin, French, German, Hebrew, Russian, Arabic, Spanish, English and Mandarin! He was also a talented mathematician, eventually working as an actuary. The Science Museum hold something known as his calculating rods in their collection but I’ve struggled to fully understand how it works!

Today the land is owned by the Western Charitable Foundation and in the past decades there have been rumours circulating that they plan to sell the land (now worth millions), deconsecrate the site and transfer the remains to Israel. However, in 2018 the Foundation confirmed that’s not their plan.

Founded in 1949, Sokol are Antiquarian and rare booksellers. The specialise in pre-1640 English books, continental books printed up to the mid-1600s and medieval and renaissance manuscripts.

When I visited a lovely staff member was all too happy to show me around inside their shop and share some of the old maps and books on sale.

As you’d imagine, the tiny shop is just a dream for any history and/or book lover. Plus you get a good view into the Cemetery below!

As for the building, it’s a curious shape and size. It’s tempting to think it could have originally been built as part of the Jewish Cemetery. The Survey of London mentions “a building for the keeper was built by 1816” and Thomas Faulkner’s 1829 An Historical and Topographical Description of Chelsea and its Environs describes “A small building of two stories … the lower part called he Hall; it has folding doors opening from the road, for the purpose of receiving the corpse previous to interment.”

So next time you’re walking along Fulham Road, pay a visit to Sokol Books and try to have a peep over the wall that’s hiding the Jewish Cemetery! And if you want a hidden cemetery you can actually visit. Read more about Chelsea’s surprising Moravian Burial ground here.