Kimpton Fitzroy | The Bloomsbury Hotel With a Titanic Connection

Formerly the Russell Hotel, The Kimpton Fitzroy Hotel reopened in April 2018. The Grade II* listed facade and interiors have returned to their previous grandeur and it’s truly a wondrous site on the corner of Russell Square.

Their revamped 19th century hotel is so fussy and over the top that its designer, Charles Fitzroy Doll, gave us the phrase “all dolled up“!

Built between 1892-98, the exterior is clad in Doulton thè-au-lait terracotta, depicting four British Queens on the outside; Elizabeth I, Mary I, Mary II and Anne. 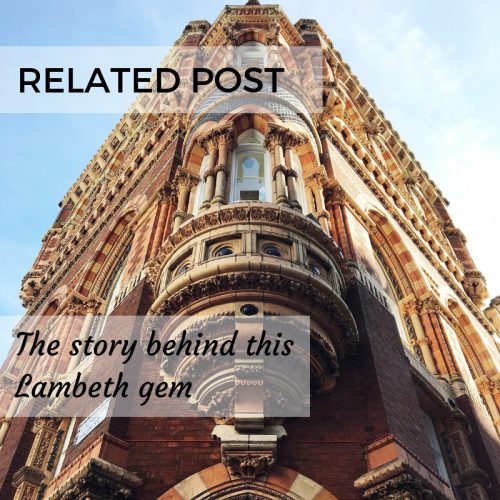 And the interiors don’t disappoint…

The entrance hall is covered in different coloured carrara marble.

And the magnificent Ballroom – used for events – has had its original modelling beautifully restored.

So its pretty clear that Doll wasn’t one to shy away from decoration and drama, but he could never have predicted that his designs would become entwined with the most dramatic tragedy in the early 20th century, the sinking of The Titanic.

The ship’s first-class dining room is a close replica of the Hotel Russell restaurant, both designed by Charles Fitzroy Doll.

But if you look up you’ll spot the original features…

Even more bizarre is that a number of guests setting sail on the Titanic even stayed here before making their way to Southampton and setting sail.

Another goosebump-inducing element is this impish sculpture; ‘Lucky George’.

George is a twin, one of a pair created by Charles Fitzroy Doll and while this one is here, the other (presumably ‘unlucky’ George) is at the bottom of the Atlantic Ocean.

If that doesn’t give you the chills I’m not sure what will! To book a room or spot at Neptune, head to Kimpton Fitzroy’s website here.

Bloomberg reported that a replica of the Titanic will be available to travellers in 2022. You can sail across the Atlantic in a journey replicating the maiden voyage. I don’t think I’ll be signing up…

The Titanic II is casting off from Dubai to New York. Would you get aboard? pic.twitter.com/sXN5gpAumN