The King’s Stone of Kingston

Little did I know, when I recently ventured to the realm of Kingston, that I was in store for an ancient quest. It wasn’t quite Arthur pulling out Excalibur, but I did encounter the King’s Stone of Kingston.

Known as The Coronation Stone, tradition and Kingston folklore say that this stone was used during the coronation of Seven Saxon Kings from 900 – 979 AD.

No one seems that certain though.

The adjacent plaque has the opener; “According to tradition, this stone was used during the ceremony of coronation…”. Historic England also describes it as “The stone on which the West Saxon Kings are traditionally said to have been crowned during the C10.”

So what’s the truth?

Firm facts are a little shaky, but the Anglo Saxon chronicle (one of our best Medieval Sources) does confirm that both Athelstan and Ethelred were crowned in Kingston, on 4 September 925 and 14th April 979 respectively.

Although he doesn’t mention the stone explicitly, the antiquary John Leland (1503-1552) refers to Kingston as a location where “a few kinges crounid there afore “the conqueste””.

As for the stone itself it is indeed and ancient Sarsen block (the same stone used for building Stone Henge) but instead of just a free-standing, public block, This was probably incorporated into an early church nearby.

Today All Saints Church stands in the centre of Kingston. The building today has been rebuilt and restored many times but does contain some parts going back to the early 12th century according to Pevsner.

It was built on the site of an earlier Saxon church of St Mary which is said to have been the site of Coronations for Saxon Kings.

After the crumbling – and dangerously unstable – St Mary’s church was pulled down in 1730 the stone was preserved and stations outside the Town Hall.

Today the stone is grade I listed and Historic England says that it was used as a horse mounting block until 1850 when it was moved to its present position and given a little more grandeur befitting a Royal relic. 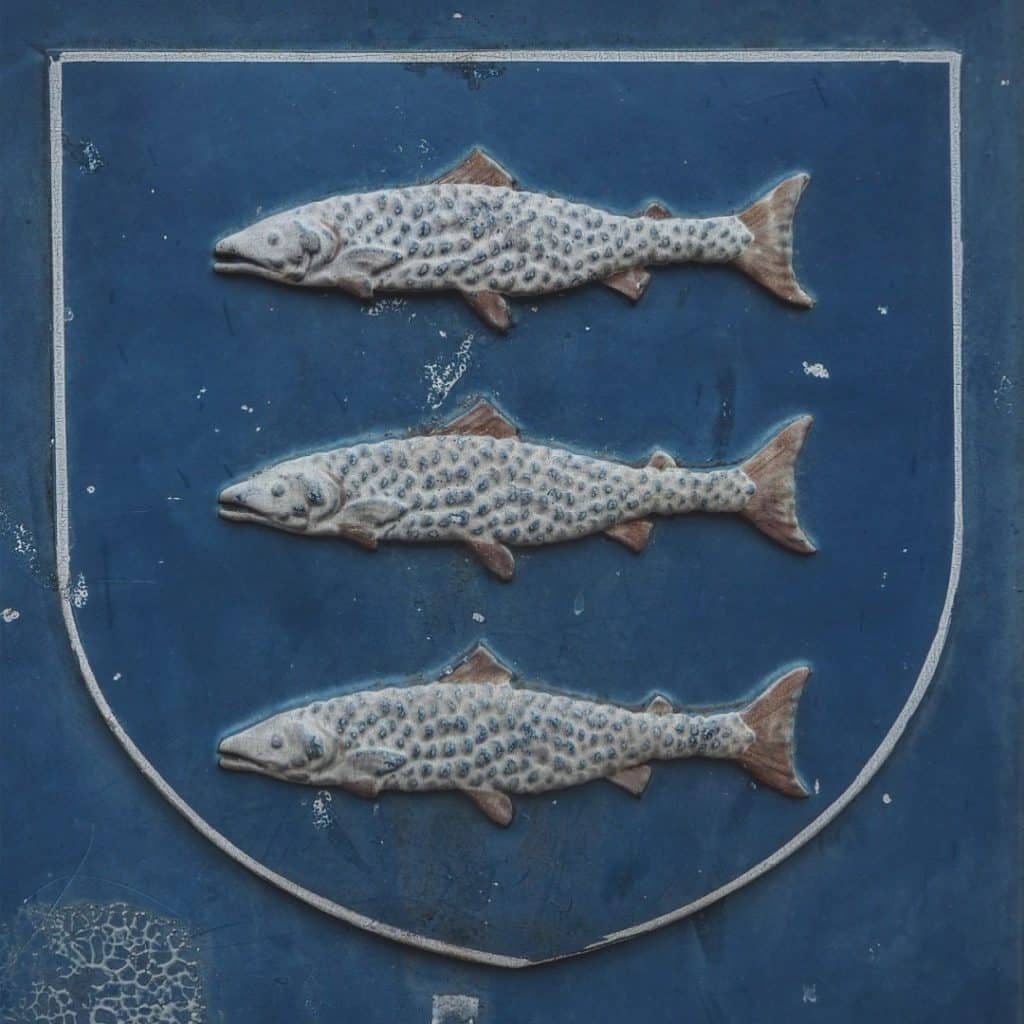 These three salmon are the ancient coat of arms of the Royal Borough of Kingston upon Thames, recorded in 1572 and 1623. The fish represent the three fisheries mentioned in the Domesday book.

Keep your eyes peeled and you’ll see them all over the town centre. 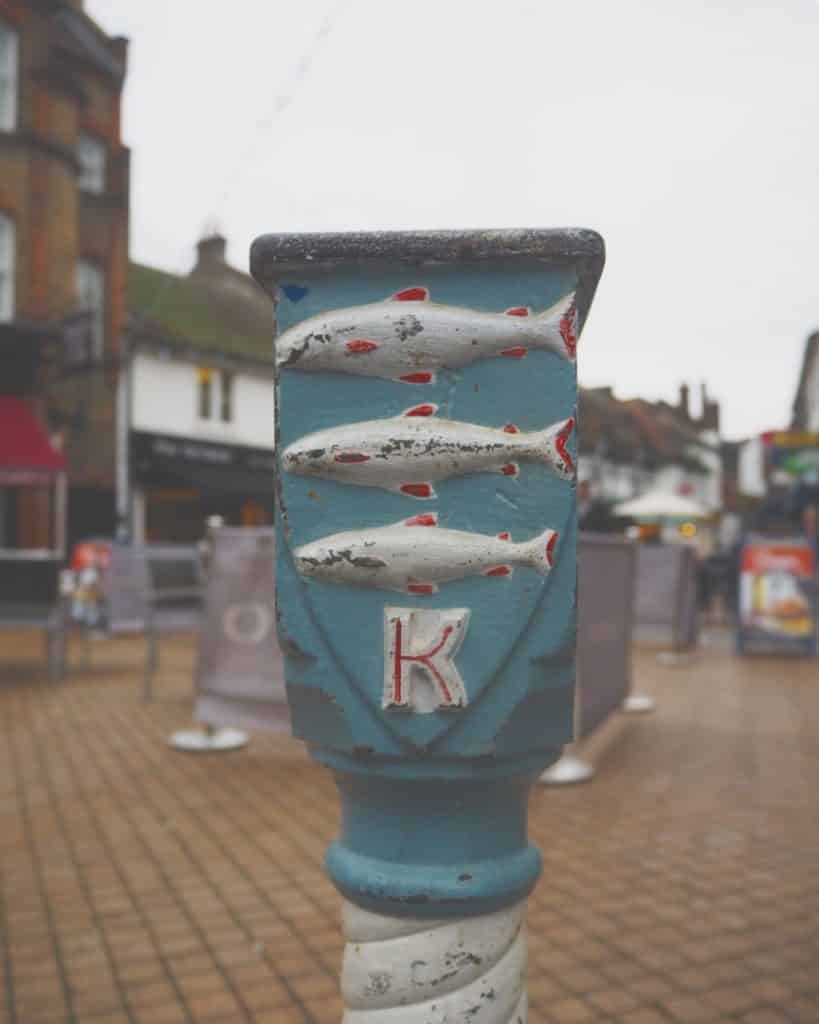 And one more ancient monument for luck… 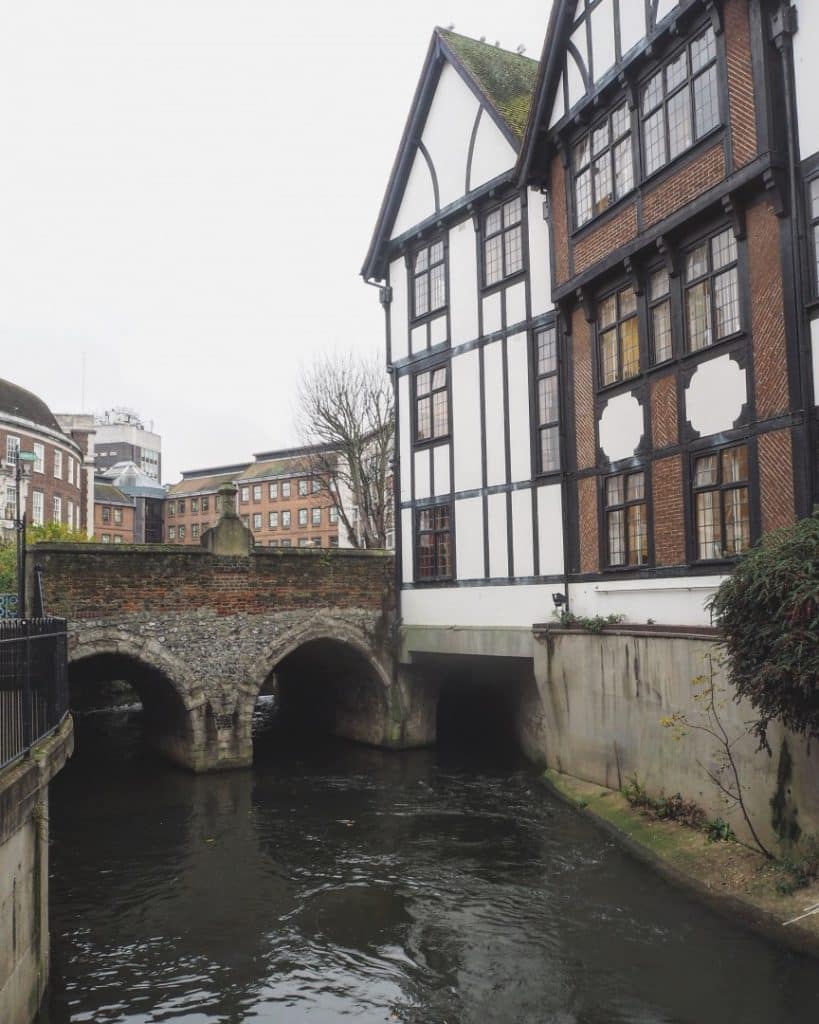 The bridge here, crossing Hogsmill River, is one of the oldest in Surrey. The oldest reference is from 1203 where it’s Medieval mouthful of a name is given as ‘Clateryngbrugge’, thought to be onomatopoeic of the horses clattering across the cobbled bridge.

Know of any more historic beauties in Kingston? Tell me in the comments!