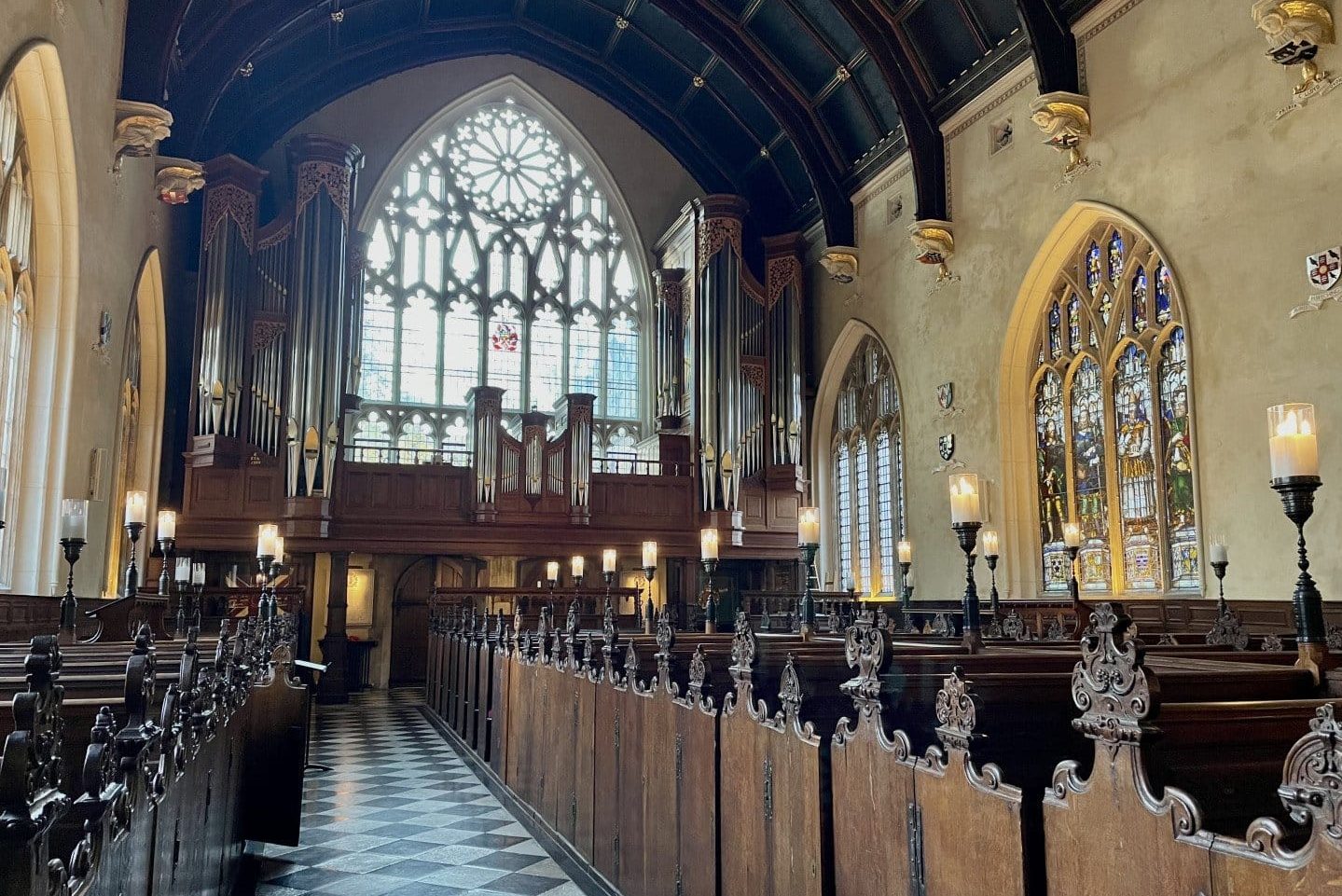 To enter Lincoln’s Inn is to walk into another world.

It’s hard to believe this quiet little enclave is right in the middle of London and best of all, during the week anyone is welcome to walk through.

The Honorable Society of Lincoln’s Inn is one of four surviving Inns of Court. Along with Inner Temple, Middle Temple and Gray’s, barristers must be a member of an Inn before they can be called to the bar.

Lincoln’s is the largest, with a site covering 11 acres and it’s history goes back to at least the 13th century however the first written records from council meetings can be found from 1422.

As you’d expect with a large site, there are many buildings and historic aspects to cover so in this blog I wanted to concentrate on Lincoln’s Inn Chapel.

Although there was an earlier chapel on site, the current one was finished by 1623. The Master Mason was John Clark and there are some claims that Inigo Jones might’ve had a hand in the design too.

It’s also closely linked with another London ‘great’ because the 1620 foundation stone was laid by John Donne, as recorded in his diary.

There’s a wonderful statue of him (that survived the Great Fire of London!) which can be seen inside the current St Paul’s Cathedral.

Like almost all old London buildings, Lincoln’s Inn Chapel hasn’t survived totally unscathed or unaltered. In the 1882-3 Stephen Salter added a fourth bay of windows and new roof but there’s plenty of original features to admire inside.

These include the intricately carved wooden pew ends.

As well as the late 17th century communion rail in front of the High Alter and the early 18th century pulpit.

Right beside the pulpit is a tiny fragment of stone from the original Lincoln’s Inn Chapel.

There are also two of original stained glass windows from the 17th century. The others were destroyed in a Zeppelin air raid on 13 October 1915. Unlike the other Inns of Court (and much of Central London) Lincoln’s Inn survived fairly intact from the The Blitz.

Historic England has a photo of the damage you can view here.

The surviving stained glass windows are worth a closer look. They are some of the most celebrated work of the early 17th century designed by the Flemish brothers, Bernard and Abraham van Linge as well as the English Richard Butler who was based nearby at Chancery Lane.

One depicts four prophets from the Christian Old Testament (from left to right) Zechariah, Amos, Ezekiel and Jeremiah.

The other shows (from left to right) Saint Peter thrusting a huge key into the foreground, Saint Andrews reading a book, St James with a pilgrim’s staff and St John the Evangelist. His attribute is a bit more niche, a tiny green snake appearing at the top of the golden cup he holds. This is a reference to when he was given a poisoned drink, but he blessed the vessel and the poison took on the form of a serpent and exited the cup.

The other windows are full of coats of arms of the Inn’s Treasurers from 1680 to the present day.

This is the undercroft of Lincoln’s Inn Chapel. A low, vaulted undercroft dating from the 18th century and where a small number of benchers (governing members) are buried.

It’s also sadly where many abandoned children were left during the 18th century, desperate mothers leaving them here in the hope they would be cared for by the Inn, or taken to the nearby Foundling Hospital. All children discovered here were given the surname Lincoln.

We cover this sad bit of London’s history and the story of the Foundling Hospital on my Quirky Bloomsbury walk.

Lincoln’s Inn is open to the public on weekdays between 8am and 7pm. There are entrances on Carey Street, Chancery Lane and from the east side of Lincoln’s Inn Fields.

You can read more about the other Inns of Court here.