in East London, London, Look Up London, nature, Things to do in London
0 Comments

A new sculpture trail for East London opened this weekend, stretching from Bow down to Greenwich and roughly following the Meridian Line, celebrating contemporary art.

Let’s start by saying 1) it’s so new it’s not even finished yet, (at the time of writing three artworks by Balmforth, Hume & Uklanski are yet to be installed) and 2) the map and direction functions of the official website are not exactly helpful.

But for the adventurers who don’t mind detours, I advise you give this a go. 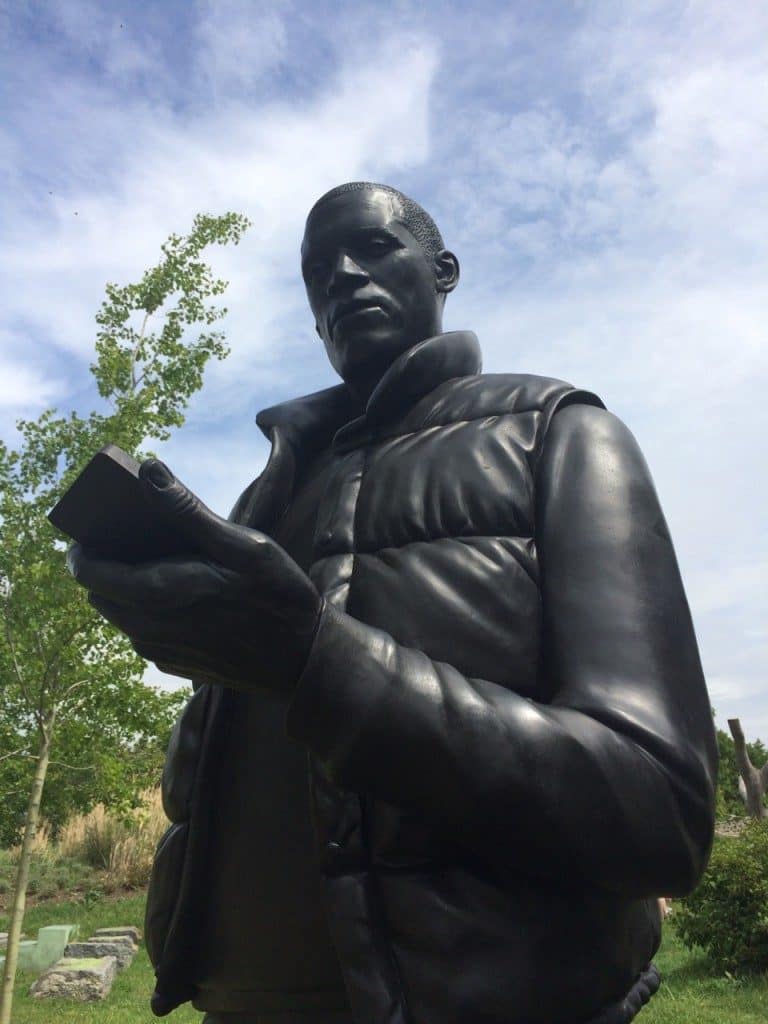 At the Northernmost sculpture, on Three Mills Island, you’re confronted with Network by Thomas J Price. Almost 9ft high, the casually dressed youth looks to his phone, his expression giving away his otherwise calm demeanour. Round the corner is a more immersive installation in the actual Mill House of Three Mills; the haunting videos set in an eerie, pitch-black room.

Following the wandering line of Bow Creek and Lea River, next up is a towering column of 22 shopping trolleys in the shape of a double helix created by Abigail Falls in 2003. It was commissioned by a supermarket chain to celebrate the 50th anniversary of the discovery of the double helix structure and before now stood in Market Square, Newcastle. 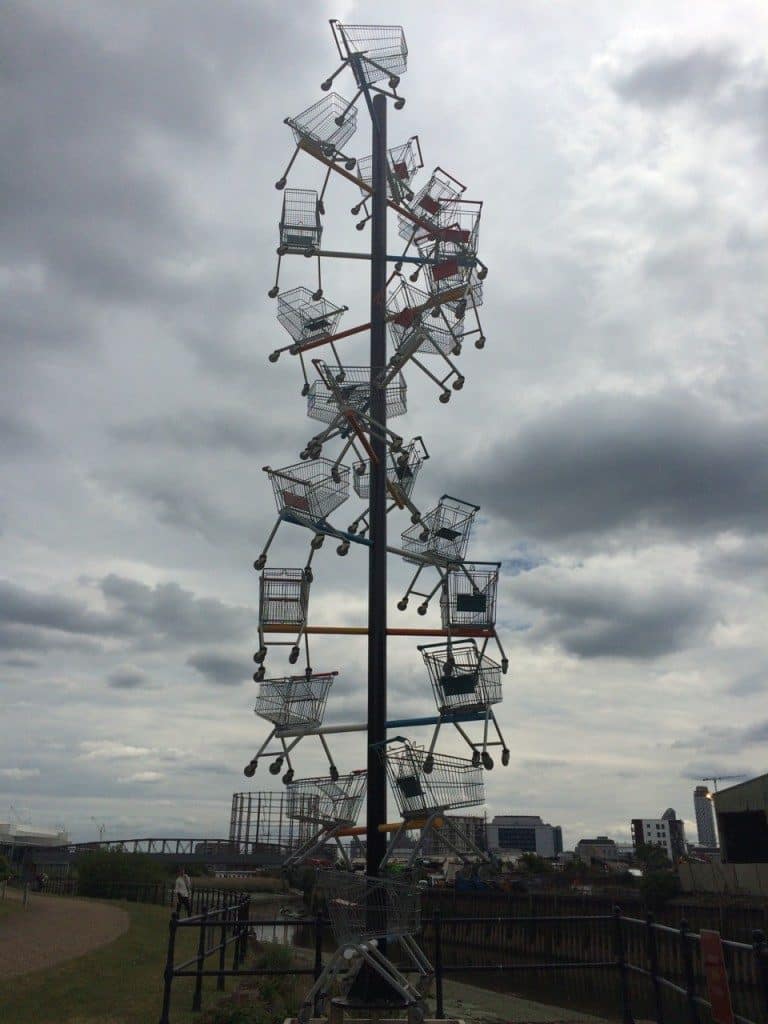 We continue to follow the river and after a bend are greeted with Damien Hirst’s Sensation (2003). Bronze but painted to look plastic and based on an anatomical model of a 3mm section of human skin. You might be reminded of Hymn, a similar biological sculpture by Hirst. 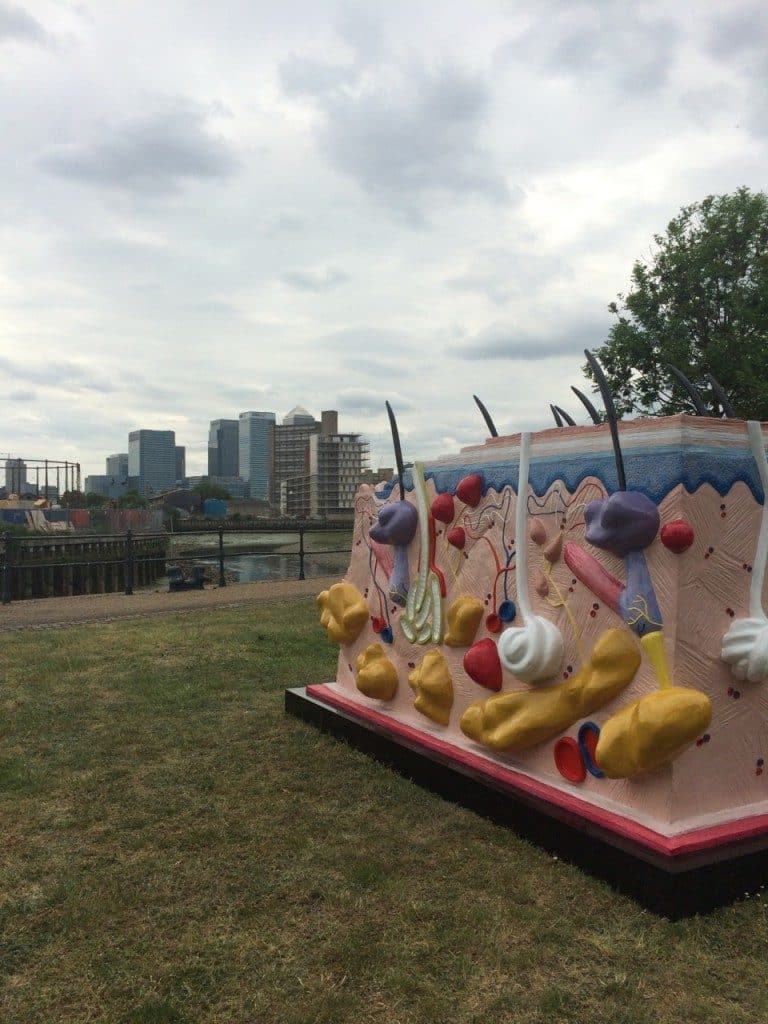 At this point we hop on the DLR from Star Lane to Royal Victoria. Around the dock we spot Vulcan by Eduardo Paolozzi (1999 Bronze). Vulcan, the Roman God of fire and metalwork, towers above The water and passers by. He’s half man, half machine which might signify the gruelling work of the sculptor. 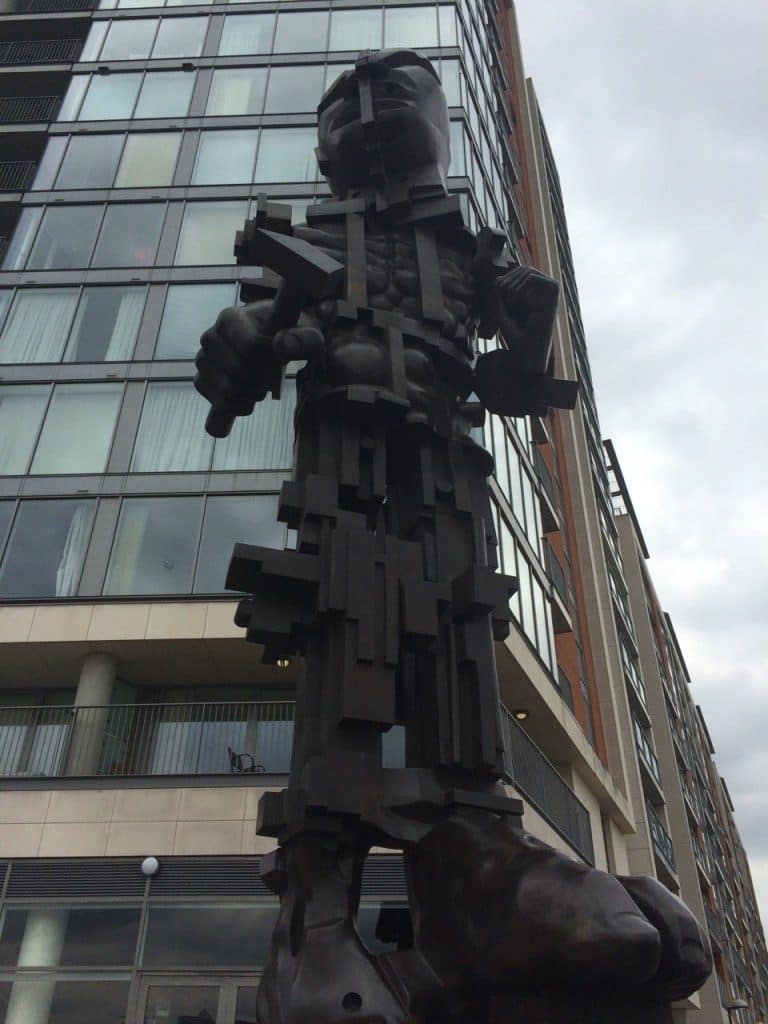 We then headed to Greenwich, taking the most logical route of the Emirates airline. The views aren’t as spectacular as some of the more central London attractions but you get a great panorama of the O2 and Canary Wharf. 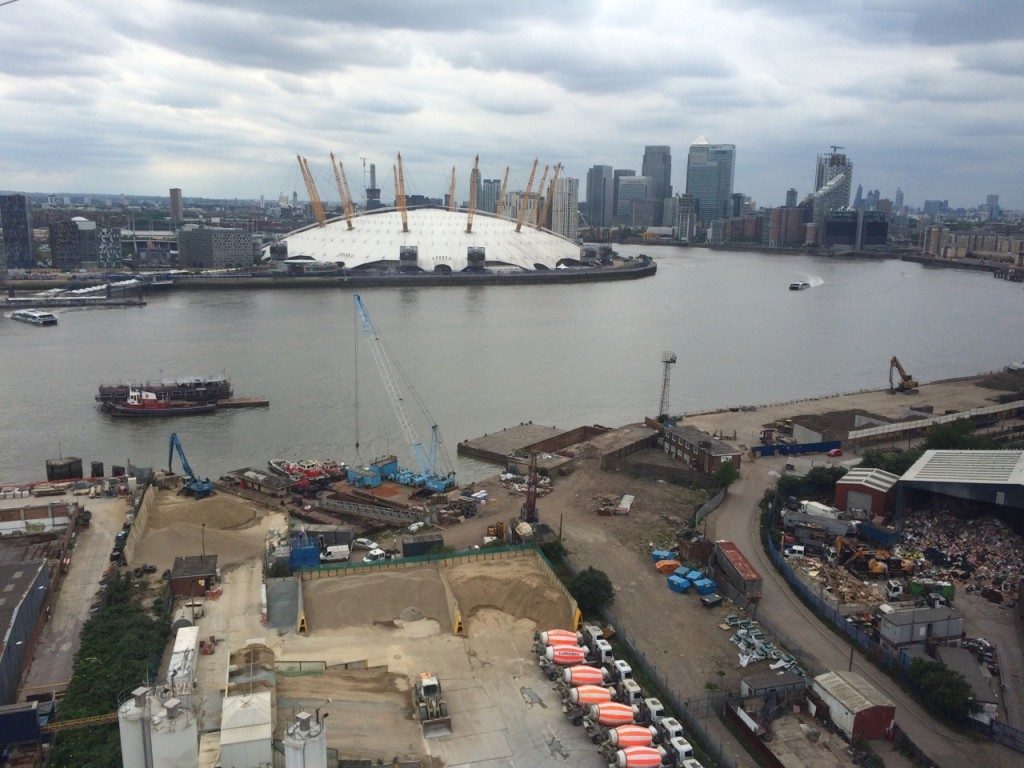 It also allows you swoop over Antony Gormley’s contribution, a bird’s nest of tangled steel with the vague figure of a man at its centre. 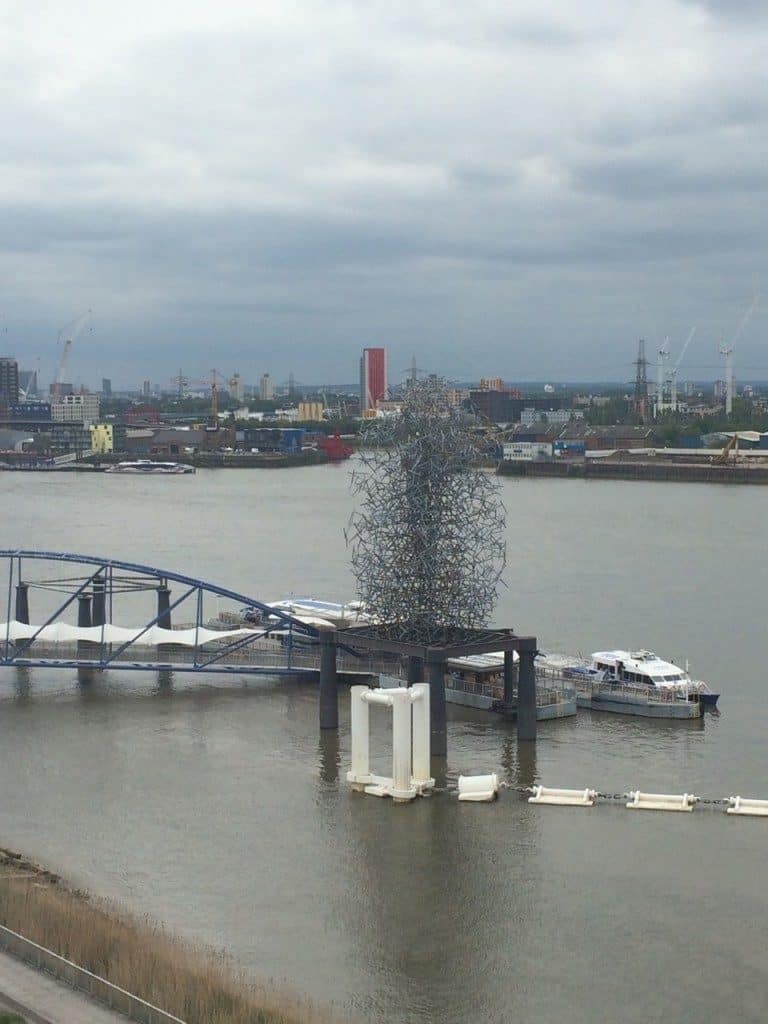 As you walk the O2’s circumference one of the most striking pieces is Richard Wilson’s Slice of Reality. A cross-section of an oil tanker floating in the Thames. 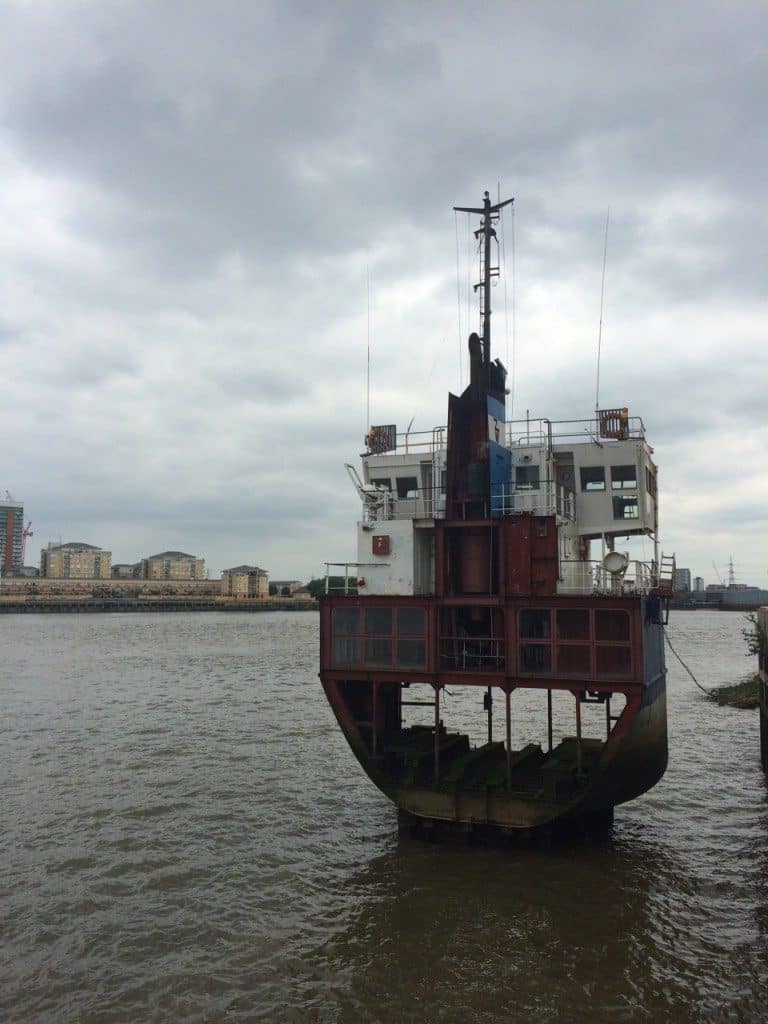 My favourite sculpture however (by Jon Thompson and Alison Craighead) was also the last. A signpost erected almost exactly on the meridian line indicating; Here 24,859. It lets you know that 24,858 miles is the amount you’d travel around the world to get back well, here. 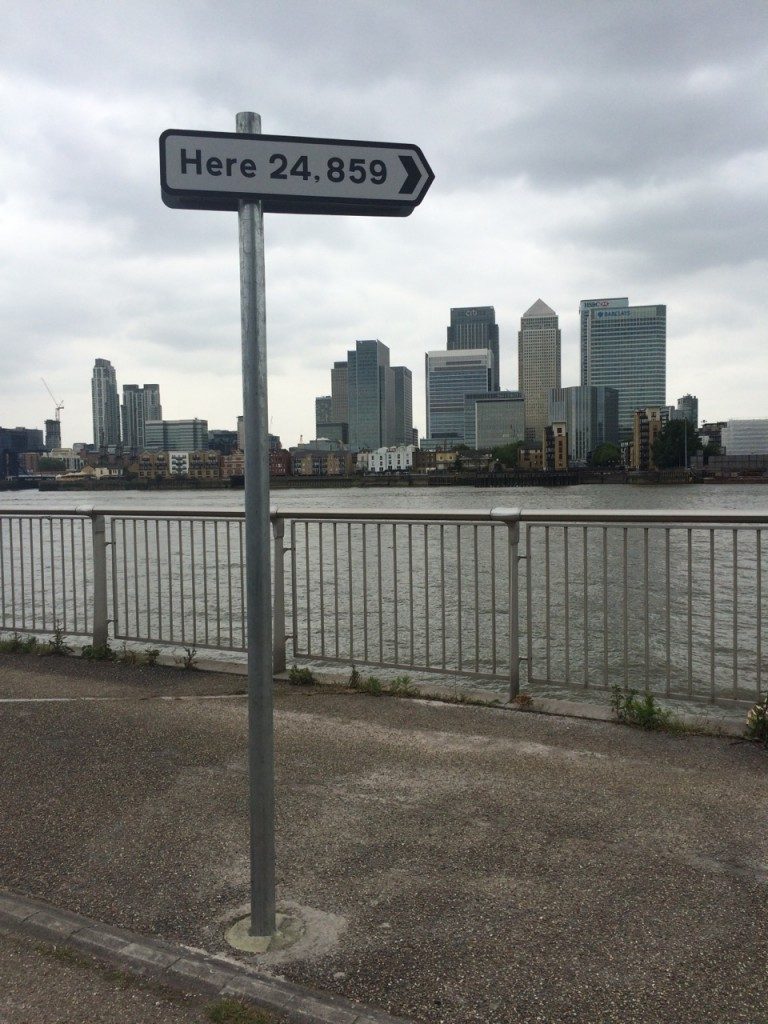