Often – literally – in the shadow of Senate House, the London School of Hygiene and Tropical Medicine can get architecturally overlooked by Charles Holden’s looming skyscraper. 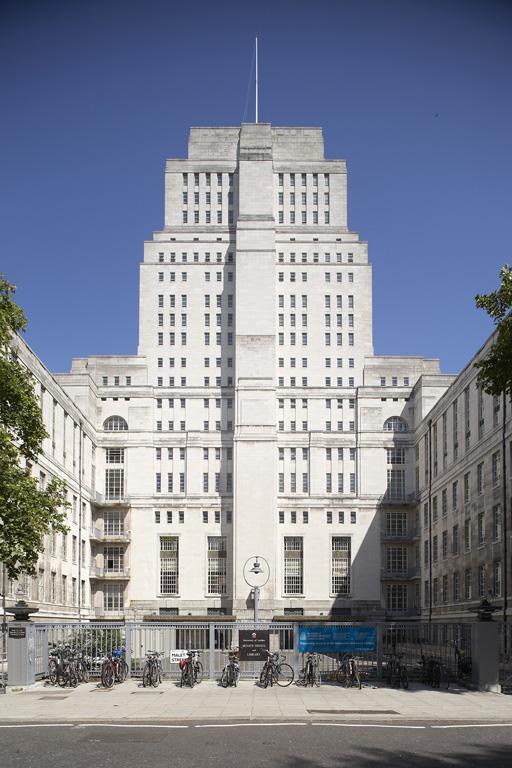 But to ignore the smaller building on Keppel Street would be a mistake, as it’s covered in interesting architectural tidbits.

The London School of Hygiene and Tropical Medicine

Founded in 1899 by Sir Patrick Manson and previously known without the ‘hygiene’ in its name, the school was based by the London Docks.

It was a sensible location as the gateway to London’s exotic imports and the first school acted like a kind of quarantine ship, where suspected cases of unknown diseases were examined.

In 1920 the school moved to Endsleigh Gardens, its aim being to develop into an institution promoting public health and understanding of tropical medicine. Renamed the London School of Hygiene and Tropical Medicine, it gained its royal charter in 1924.

Now it’s based on Keppel Street, opposite Senate House and only a 10 minute walk from Endsleigh Gardens.

Today it’s one of the highest-rated research institutions, with 4,000 students and 1,300 staff working in over 100 countries. It aims to help shape health policy and make a tangible impact by converting research into action plans, citing its collective purpose as ‘improving health worldwide’.

Initially though, the building was intended for an entirely different purpose. The National Theatre Committee having bought the plot in 1913 to build a Shakespeare Memorial Theatre coinciding with his 300th anniversary of his death in 1916.

As you might’ve guessed by the dates, World War One interrupted these plans.

In 1925 the land was bought from the National Theatre Committee and Architects Morley Horder and Verner Rees won the public design competition. The new building was planned in the shape of a giant ‘A’ with two large courtyards to give air and light to the surrounding rooms.

The architects were picky about the  furniture too, ensuring everything inside the Board Room and Library should be made by a guild of craftsmen following their plans. It might be one of the reasons that the building gained Grade II listed status in 1982.

Based on a Sicilian coin from 466BC, a horse drawn chariot pulls two Gods; Apollo (war, prophecy, music, medicine) and his sister Artemis (hunting, chastity and childbirth). It’s Artemis who holds the reins while Apollo fires arrows.

It’s Apollo’s son – Asclepius – who is the ancient Greek God of Medicine and whose attribute still acts as the symbol of the medical profession today; a staff entwined with a snake.

Behind them is a date palm with plenty of hanging fruit, a hint towards the ‘tropical’ side of the school’s activities.

One of the few bits of decoration on the stripped back classical facade is a frieze of Science ‘greats’, 23 surnames of men (and it is all men) who worked in the fields of Hygiene and – you guessed it – tropical medicine.

No one seems quite sure on the exact reasons that some made the cut and not others, but each is listed on the LSHTM website. You’d think at least Florence Nightingale might’ve appeared as a token woman.

Some have suggested that her surname was too long. But last time I checked, ‘Nightingale’ had the same number of letters as ‘Pettenkofer’…

But my favourite little details have to be the creatures depicted on the railings. Most buildings have regal lions or because mythical beasts, but we’re strictly on topic here.

The gilded wildlife are all living creatures that carrying a terrifying range of deadly and tropical diseases.