The London Stone is back on Cannon Street

in City of London, London, Look Up London, Things to do in London
0 Comments

On 4 October the London Stone was returned to a fancy new home on Cannon Street. Proclaimed as the ‘Heart of London’, what is it? And why is it so important?

Essentially it’s a block of – rather grubby – stone. Oolitic Limestone to be precise. That type of stone came to London with the Romans, who created their settlement Londinium in 43AD. The apocryphal version of the story goes that it came to London along with Brutus of Troy, there’s very little evidence suggesting he even existed, but legend says he founded Britain.

The stone has been on Cannon Street (originally called Candlewick Street) since the Medieval period and its location leads to a few theories of what it could’ve been.

1. It’s the spot where a large Roman building, the Governor’s Palace, once stood. This might mean it was the base of a monument or a kind of road marker to measure distances to and from.

2. It’s location marks the centre of a collection of new streets laid out by King Alfred the Great when he re-established The City of London in 886.

The first written references to a ‘London Stone’ date from the early 1100s, but before then we don’t know exactly how it got here or why.

The Heart of London?

Of the myths heaped onto the London Stone, the idea of it being a Druidic altar of sacrifice seems the most farfetched. The first suggesting of it being an ancient monument to ‘heathen worship’ came from an account by John Strype in 1720.

In 1450 Jack Cade led a rebellion against King Henry VI with a band of disgruntled men from Kent. When they arrived in London, Jack is said to have struck the London Stone with his sword, a gesture to show he was now in charge of the city. It didn’t work for Jack though, whose followers started looting and subsequently scattered. He was killed outside of London in a small skirmish, probably a better way out than being hanged, drawn and quartered back in London.

There’s also a rhyme attached to the stone; “So long as the stone of Brutus shall stand, so long shall London flourish”. What sounds like an archaic saying was in fact invented by an eccentric Welsh clergyman in 1862, but the myth stuck!

Locations Then and Now 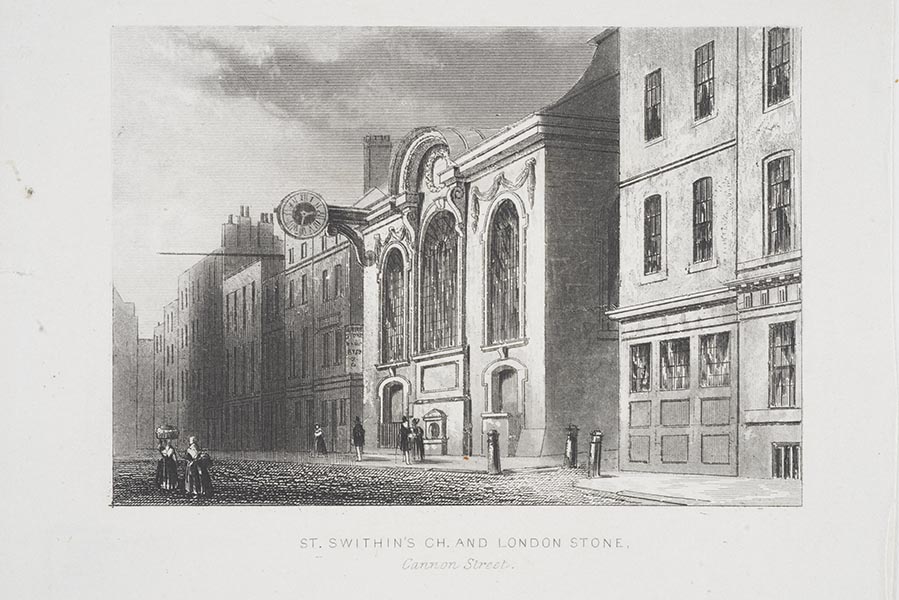 Image of an Engraving by John Tallis, 1846-47 from Museum of London.

Political upheavals aside, the stone was moved a few times across the centuries, but remained close to the Walbrook River on Cannon Street. But from the 1820s it was embedded in the wall of the Wren Church of St Swithin’s, where it stayed until the church was gutted by a bomb during The Blitz.

If you’re looking at the stone, the small alleyway immediately to the right is called St Swithin’s Lane, recalling the church.

After that it was given a fancy new grate and positioned in the wall of a 1960s office block. Still a curiosity but definitely lacking the grandeur it deserved.

After a stint in the Museum of London for safe-keeping, the stone was restored to Cannon Street. Now it’s just a bit farther West of its former location.

Although the setting is a lot smarter, it’s an absolute pain to photograph behind glass, hence yours truly in the background below!

Thankfully, it’s far better backlit, when the lights come on at dusk.

So next time you’re in Cannon Street, have a look out for number 111, just opposite the station.