London’s Most Eye-Catching Weathervanes and the Stories Behind Them

Look up. No, right up! See that glinting in the sunlight? London weathervanes can range from the standard arrow to the downright mad.

A lot – of course – can be spotted on Churches. But keep your eyes peeled and there’s plenty to find on all sorts of London buildings and usually they’re key to unravelling its history.

Sometimes friendly (and sometimes fierce!) these creatures keep a watchful eye over London. 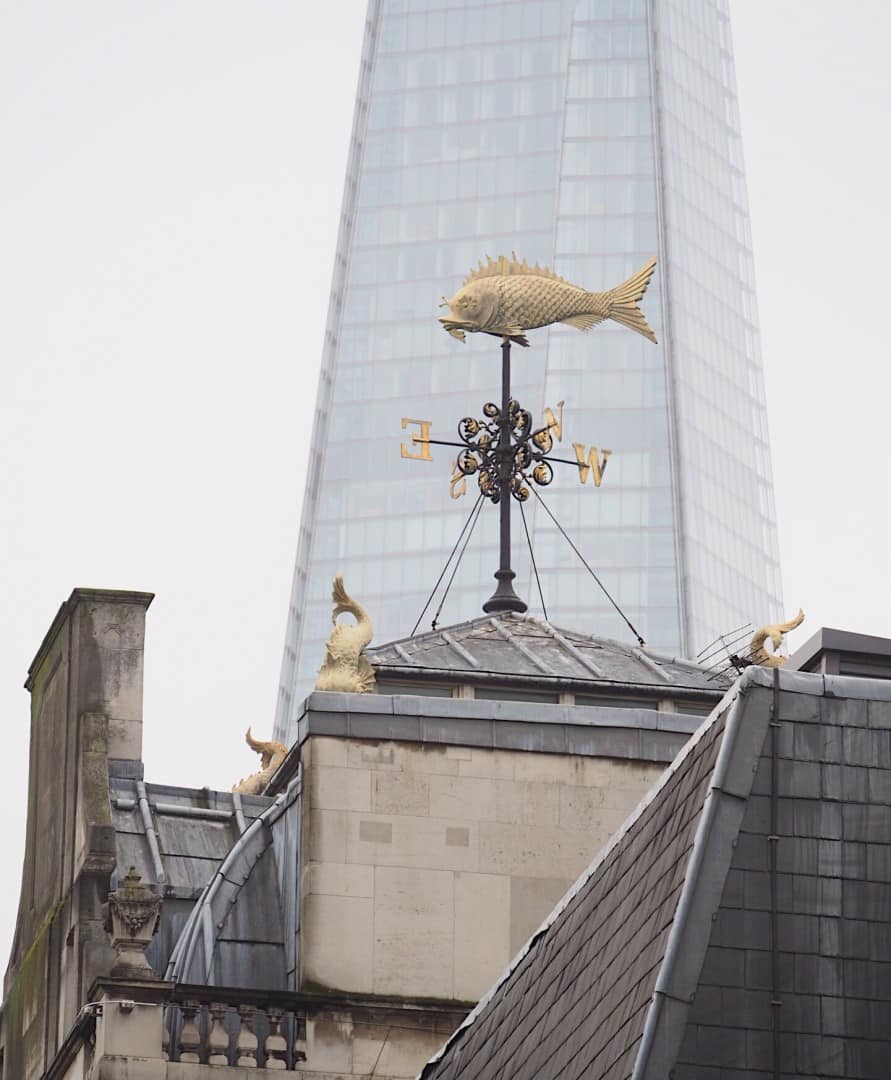 No prises for guessing this was an old fish market. The current building was purpose-built by Horace Jones in 1876, replacing the smaller one from 1850. The site has hosted market stalls since Roman times but got its fishy reputation from an 1699 act of parliament. It allowed a “free and open market for all sorts of fish whatsoever” and until the early 19th century fish and seafood were sold from stalls around the dock area. Today the listed building is an events space for the City of London and New Billingsgate is in Canary Wharf.

On a similar market theme this next one can be found a short walk from Smithfield Meat Market. 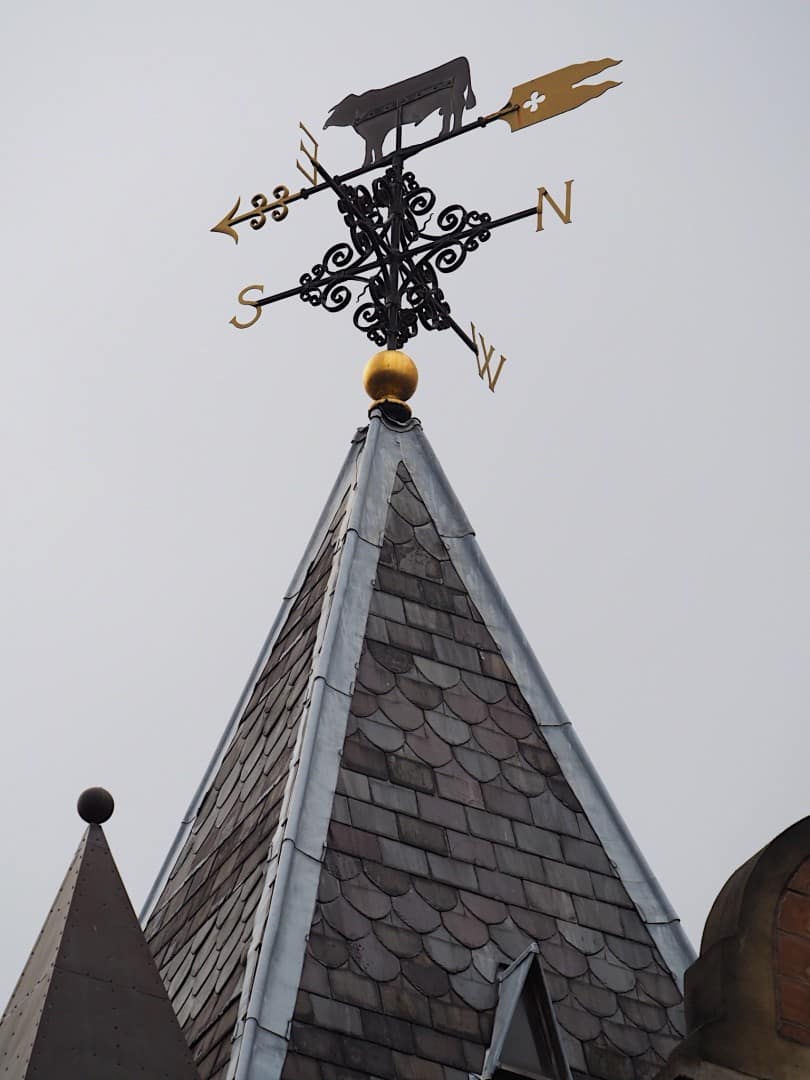 The Rookery Hotel in Clerkenwell is run by the same team as Hazlitt’s in Soho. They’ve restored the Georgian frontage on St Peter’s Lane and a wander through the streets really dow feel like time travel. 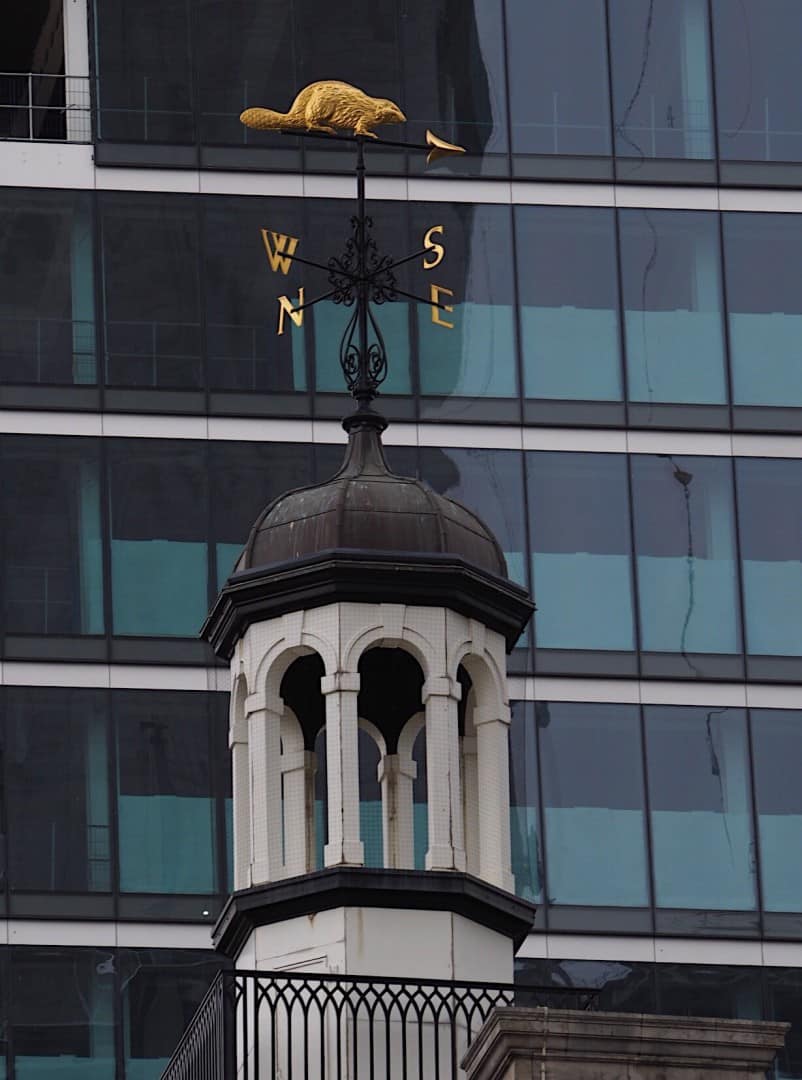 Look up along Bishopsgate and you’ll spot a golden beaver! It’s there as a reminder of Hudson’s Bay Company, who primarily dealt with fur, beaver’s being especially popular for felt top hats. They held their headquarters in London from 1668 until 1970 when they became a Canadian Corporation and moved across the pond. The building is now home to a variety of hi-spec office space inside, with the original facade of by Mewes and Davies dating from 1926.

Cockerels often feature on church weathervanes, in fact a 9th century papal edict required every church in christendom to be mounted with one. There was also a time when the terms weathervane and weathercock were interchangeable.

They remember the bible story of Peter betraying Christ; “This very night, before the rooster crows, you will disown me three times.” (Matthew 26:34).

As well as its lovely weathervane, this unique church is worth a visit to see the garden. See why it’s The City’s best kept secret here.

Is that a grasshopper? Yes. Yes it is. 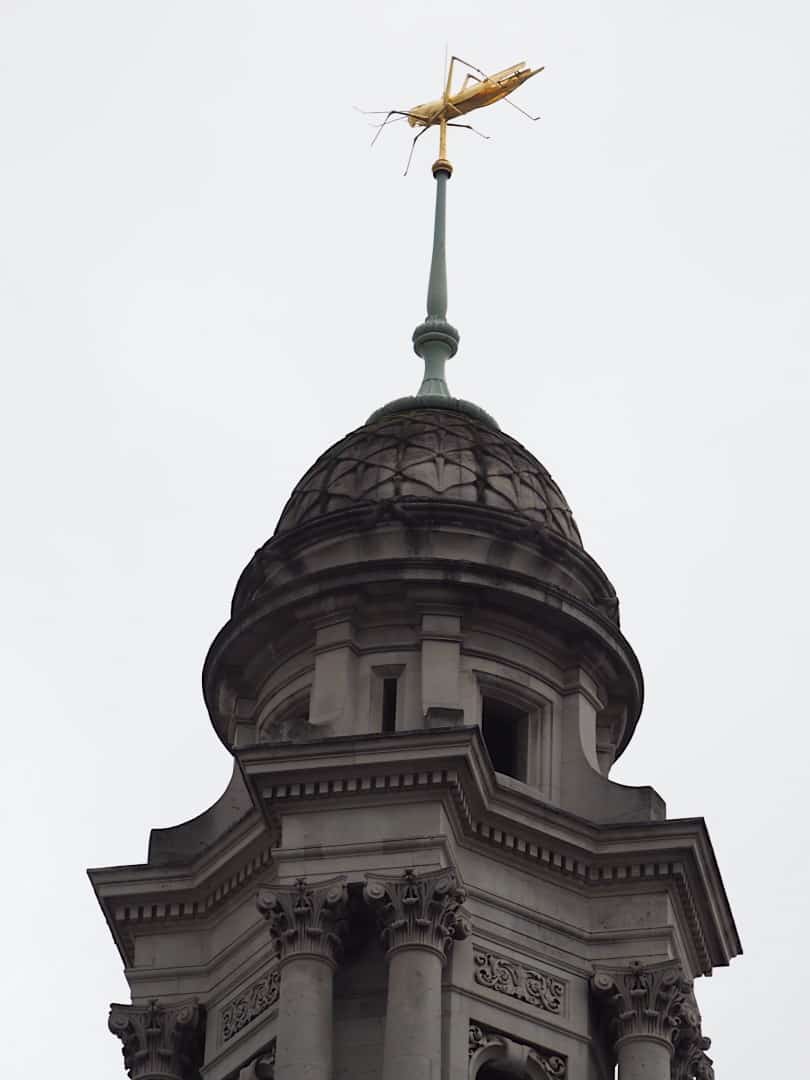 Gracing the top of the Royal Exchange – former hub of London’s trade – is a gold grasshopper. It’s there because it’s the heraldic symbol of Thomas Gresham, founder of the Royal Exchange. Today it’s an upmarket shopping mall, but you can read more about its history here.

Another Cockerel (looking a lot better than St Dunstan’s it must be said) is this one of the edge of The City. It also claims to be the oldest, founded by the Abbess of Barking in 675AD. It was from this tower that Samuel Pepy’s – who had his office nearby – watched the fire of London grow in 1666.

Another firm favourite symbol on the skyline are ships. Again, they often pop up on church steeples, symbolising the Christian journey, but they’re not exclusively ecclesiastical.

Nestled between modern buildings is the tower of St Olave Jewry on Ironmonger Lane. It was built by Wren but is now a solicitor’s office. 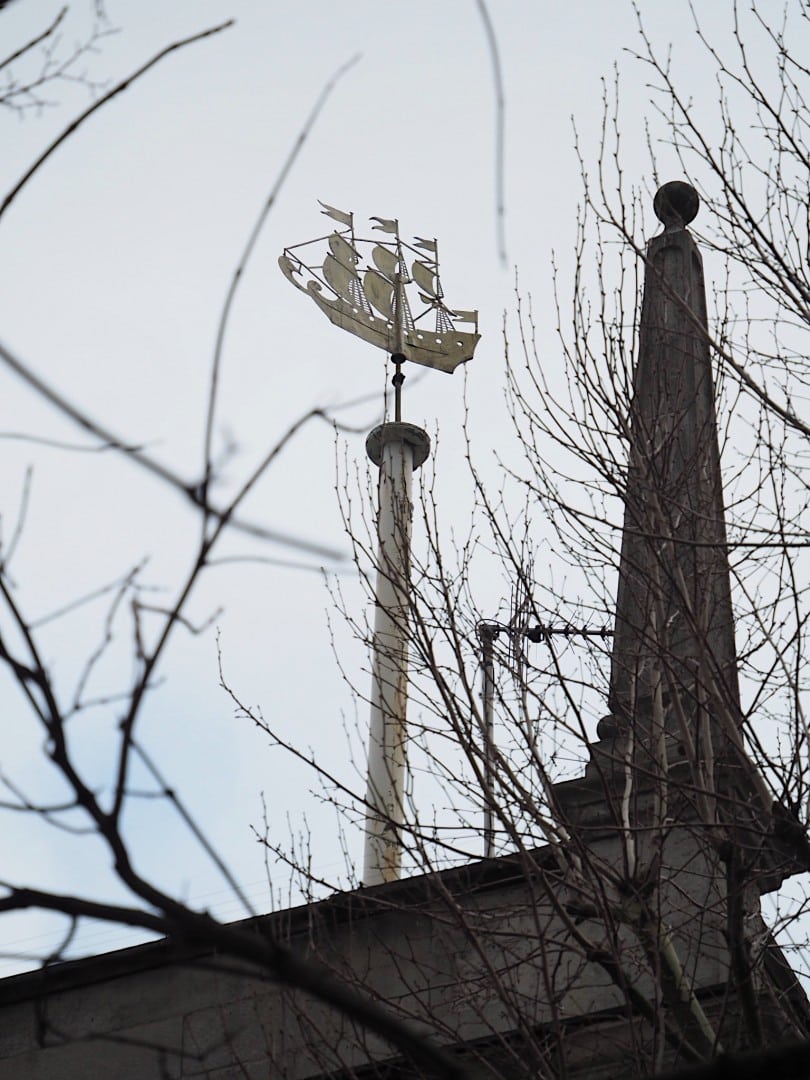 As for the weathervane, it’s actually from another church; St Mildred’s Poultry. Dating back to 1175 it was demolished in 1872 when the two church parishes merged.

Rather in the shadow of St Paul’s Cathedral, St Nick’s Church (as St Nicholas Cole Abbey has been rebranded) is a friendly City church with a lovely cafe.

St Nicholas is more commonly known by his alter ego Santa Claus, but he was also the patron saint of travellers at sea, hence the delightfully elaborate weathervane. 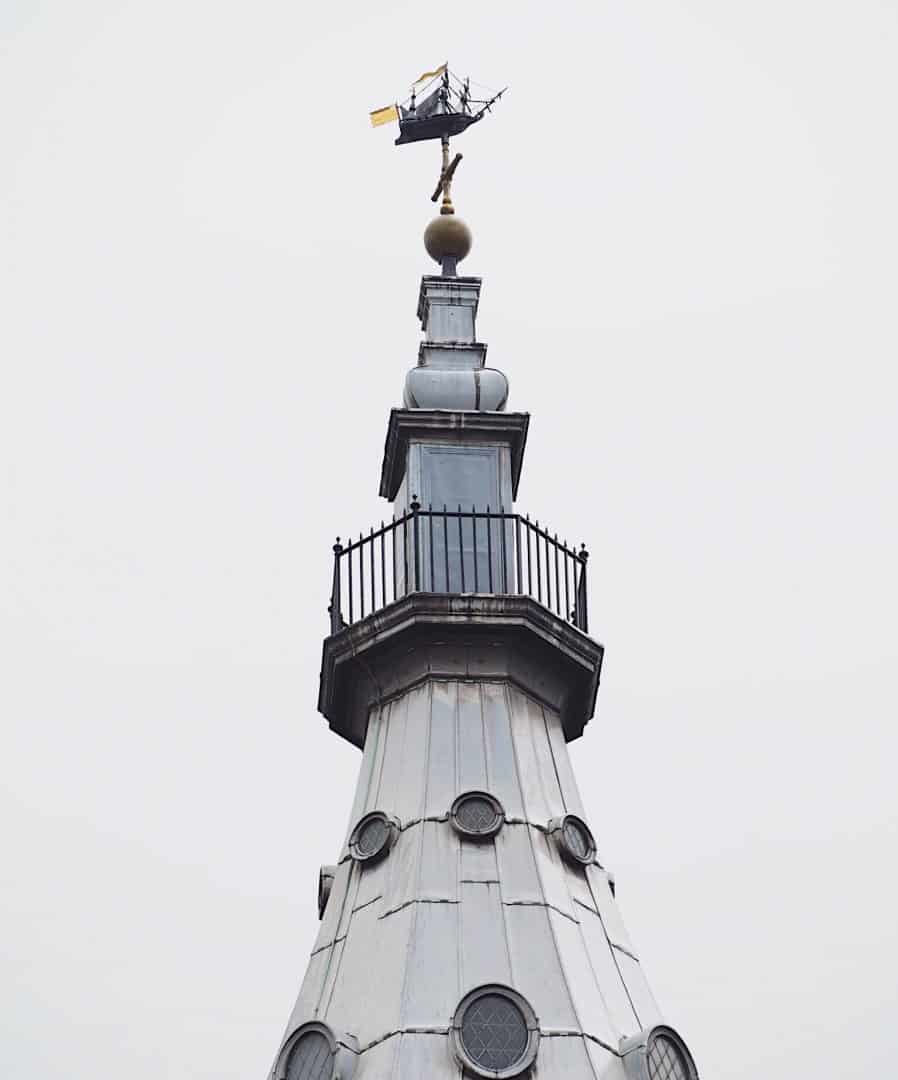 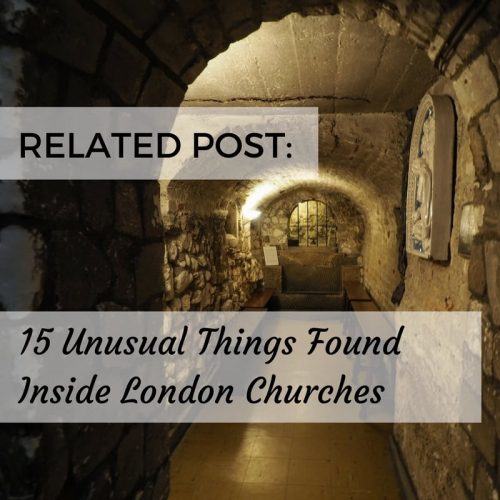 Established in a London coffeeshop in 1760, Lloyds Registry Office is a marine classification society. Their headquarters on Fenchurch Street is covered in naval symbolism and the gold ship is the cherry on top. 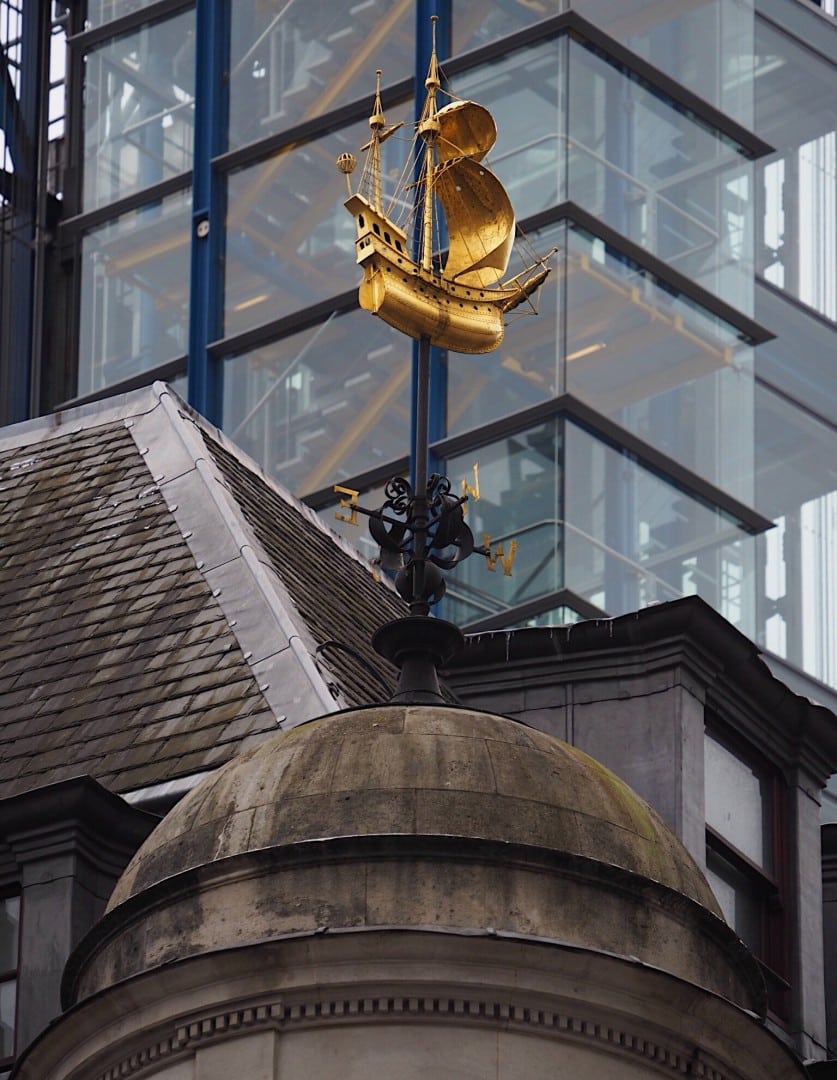 Today they works across compliance, risk and as technical consultants for those with marine assets.

Built to the designs of American millionaire William Waldorf Astor, Two Temple Place doesn’t hold back inside. But from the outside you get a feel of the opulence from the huge weathervane. 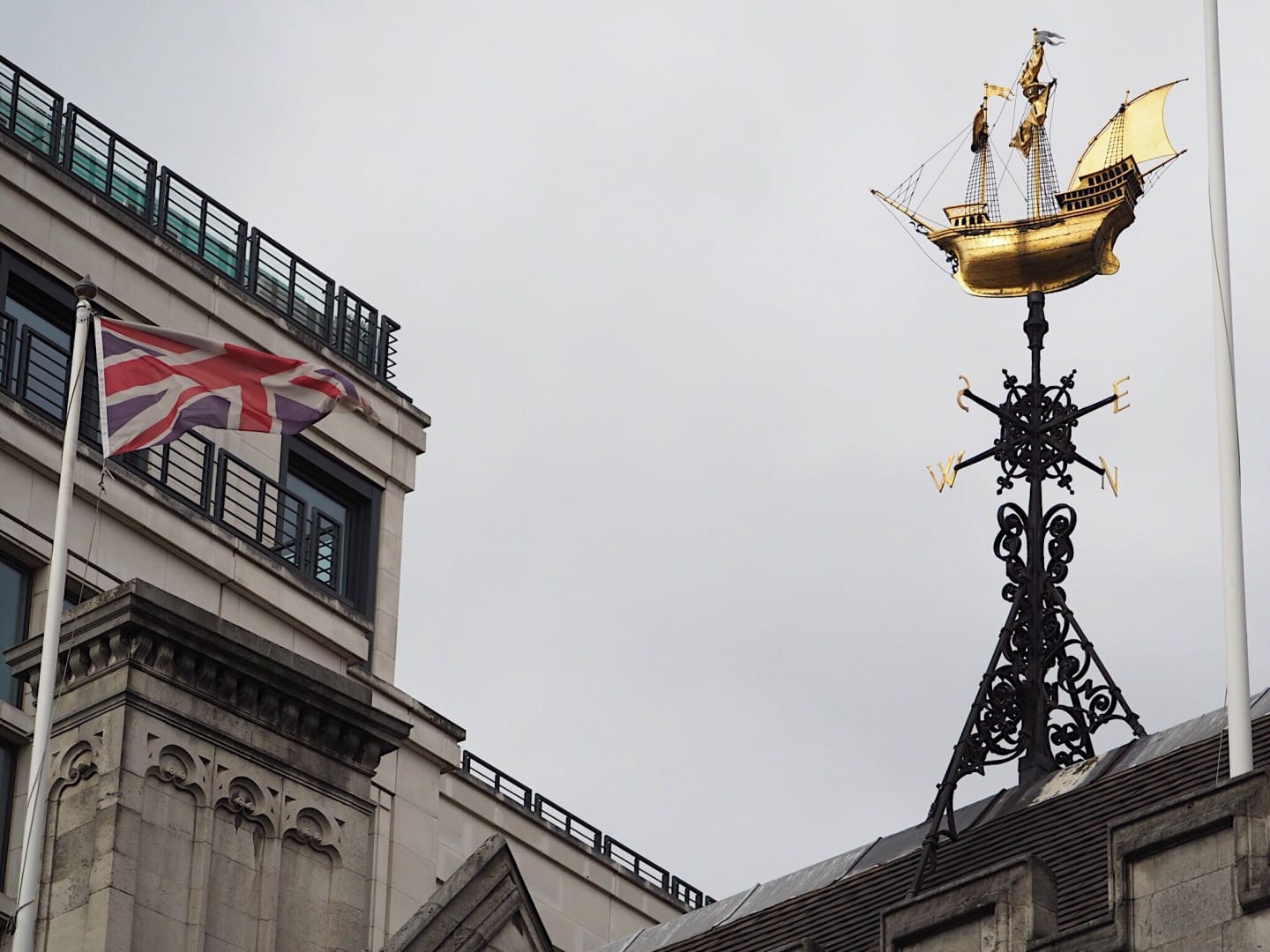 Made by J. Starkie Gardner, it represents the sailing ship Santa Maria from which Christopher Columbus ‘discovered’ America.

On entering the mock-Tudor landmark of Liberty’s, you can feel the creaking timbers of the two ships; HMS Hindustan and HMS impregnable, from which it was built.

A more obvious sea-faring connection is up top, the gleaming gold replica of The Mayflower which carried pilgrims to American in 1620. 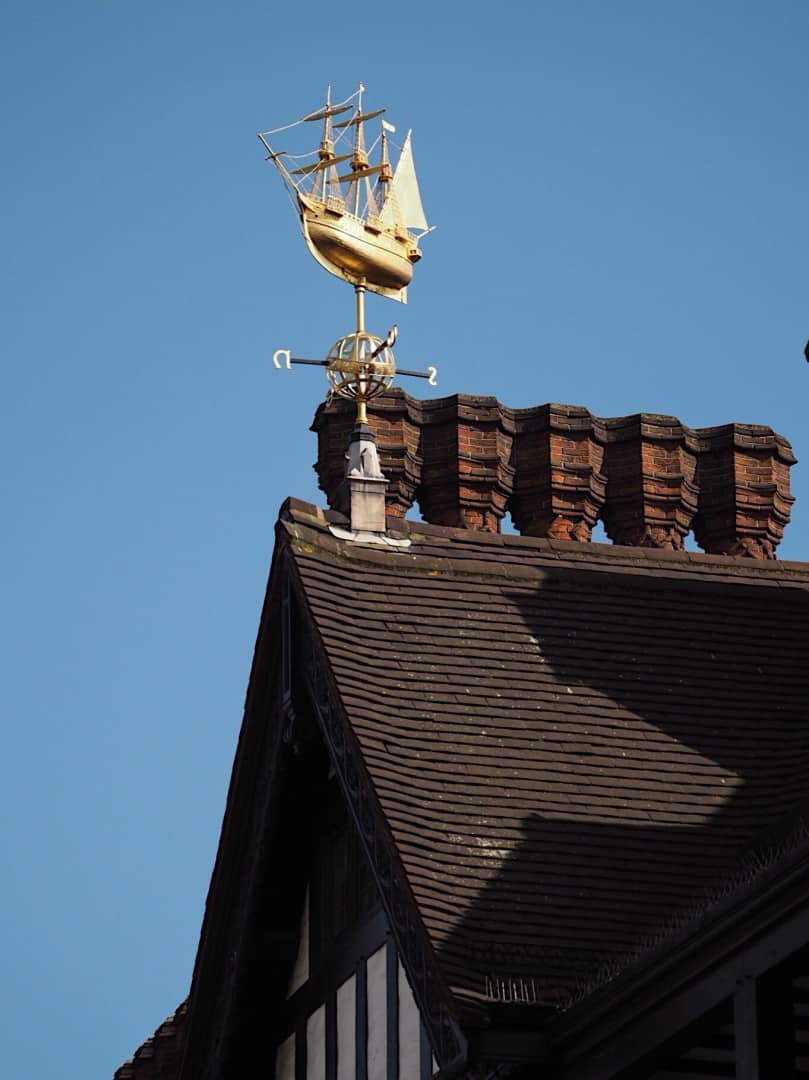 A nice additional thing to think about is the size of this weathervane. From down below it looks small. But looks at this picture below and you get a sense of the scale! 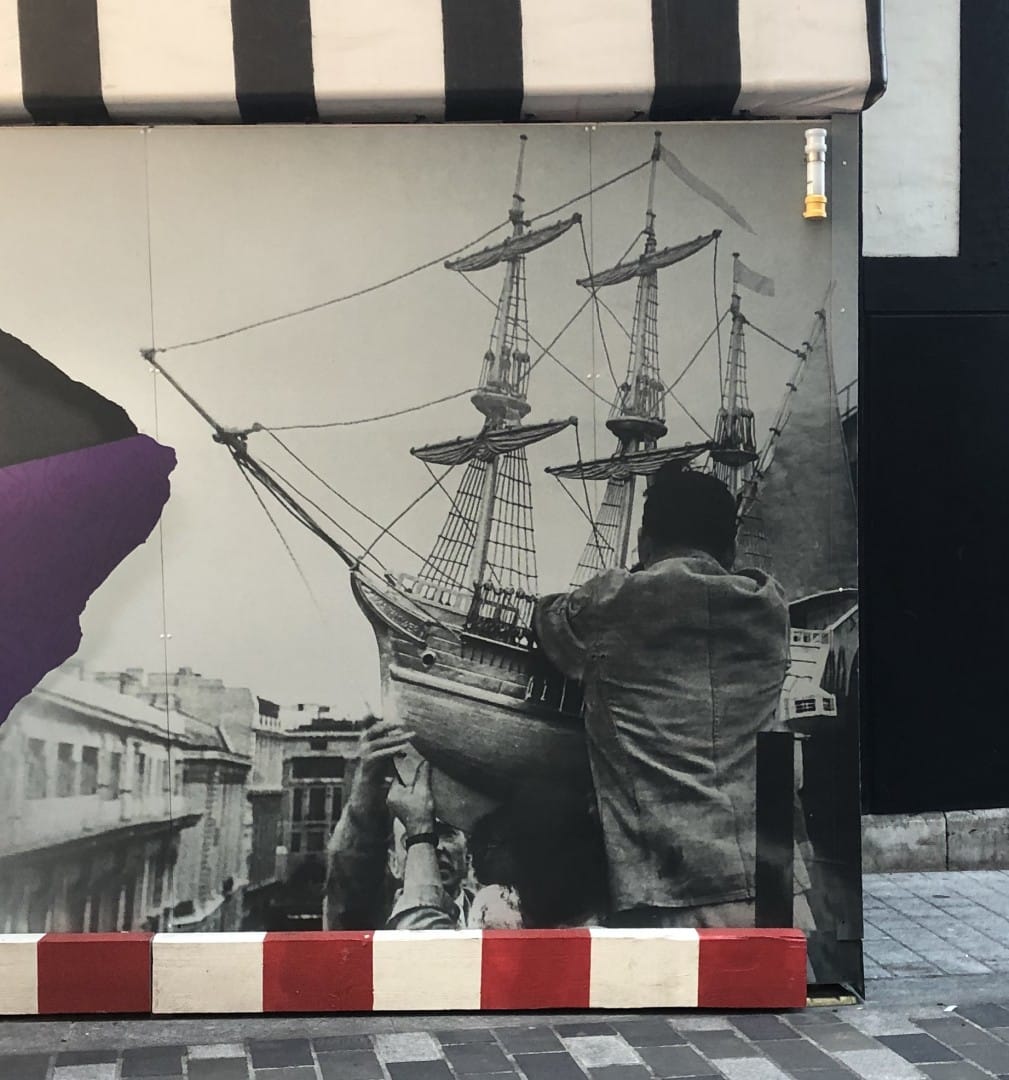 It wouldn’t be London without a few bizarre extravagances that buck the trend. How many of these have you spotted?

It’s a final cruel joke for many Christian martyrs, that they’re depicted by their murder weapon. E.g. the sword that decapitated St Paul and poor old St Catherine having to lug about that wheel.

Spare a thought then for St Lawrence, barbecued to death on a gridiron in 258 AD. Look right to the top of St Lawrence Jewry in Guildhall Yard, and you’ll spot the grisly culprit in the weathervane. 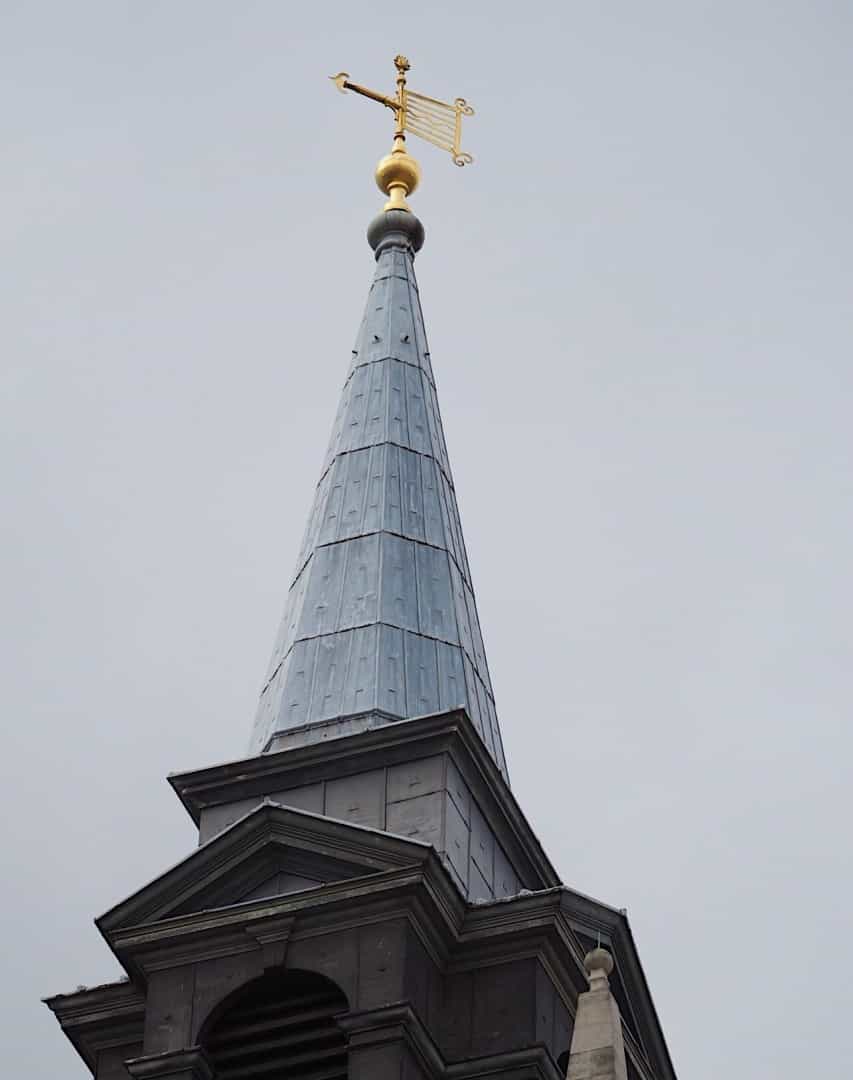 Locked in the middle of traffic below Aldwych is the fabulous St Mary Le Strand, finished in 1723 and designed by James Gibbs.

Taking a closer look at the steeple, you can make out a star or comet as the weathervane. This could be explained as just a reference to the coming of Jesus (in some translations of the Bible the ‘star’ over Bethlehem is a ‘comet’). 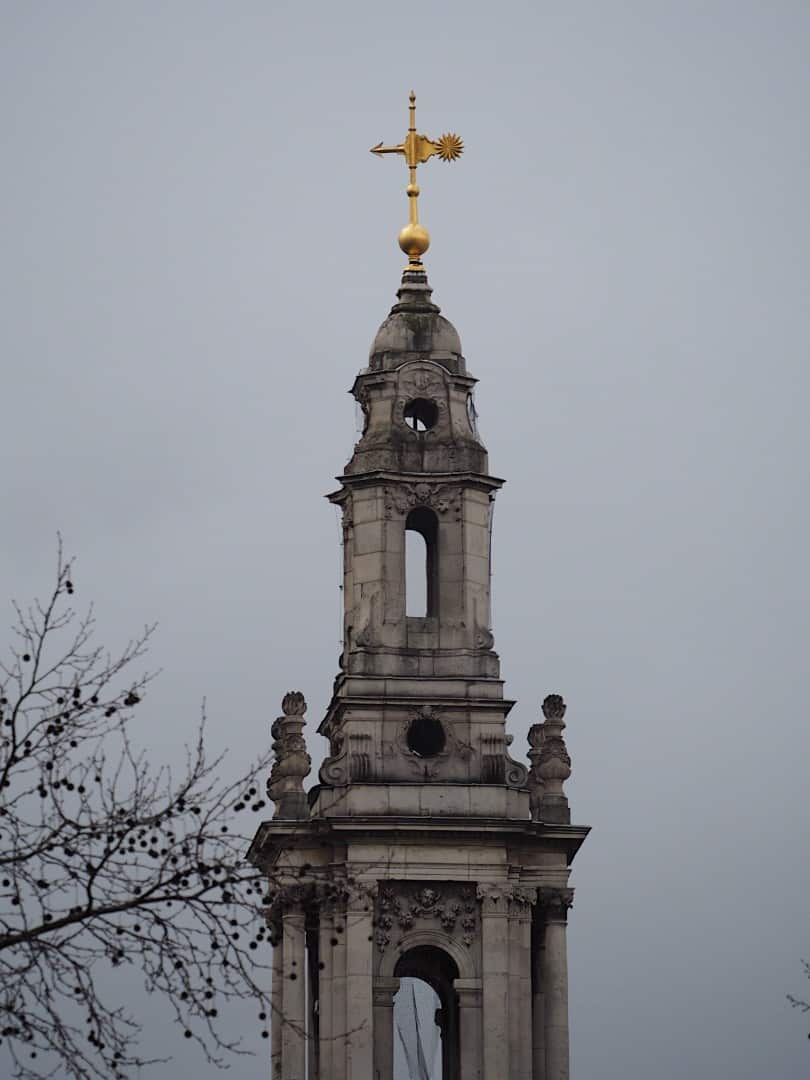 But there’s a happy coincidence in the nearby green plaque to William Lilly. 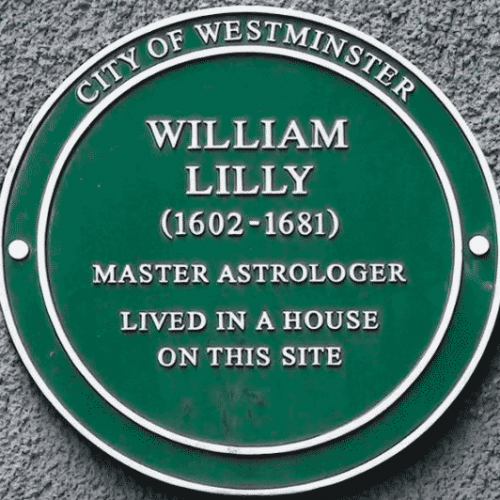 Most famous for predicting The Great Fire of London, Lilly has largely been forgotten today, but in the 17th century was considered the ‘English Merlin’, mentioned in Samuel Pepys’ diary 3 times. He was actually a member of the parish of St Clement Danes further toward Fleet Street, but I thought the connection was worth mentioning!

This brilliant Viking ship can be spotted in Rotherhithe.

The Church is quite new, opened in 1927, but the there’s been a church catering for the Nordic community in Rotherhithe since 1871. Why? Because it was close to the Surrey Commercial Docks which imported huge amounts of timber from Norway. The docks were closed in 1969, but this church is a reminder of that history.

Sitting in the boat is a tiny figure of St Olav, patron saint of Norway, in the act of loading ships to  help Londoners defend against the Vikings.

He had the canny idea of tying his boat to London Bridge, pulling it down in the 11th Century. It’s where we get ‘London Bridge is Falling Down’ from. Or at least the best explanation I’ve heard…

The winged horse of Pegasus is the symbol of Inner Temple, one of  the four surviving inns of court which constitute the heart of legal London. You can spot symbols of the different inns (the lamb and flag for Middle Temple, a Griffin for Gray’s and a lion for Lincoln’s) all over Temple, but my favourite has to be this weathervane. 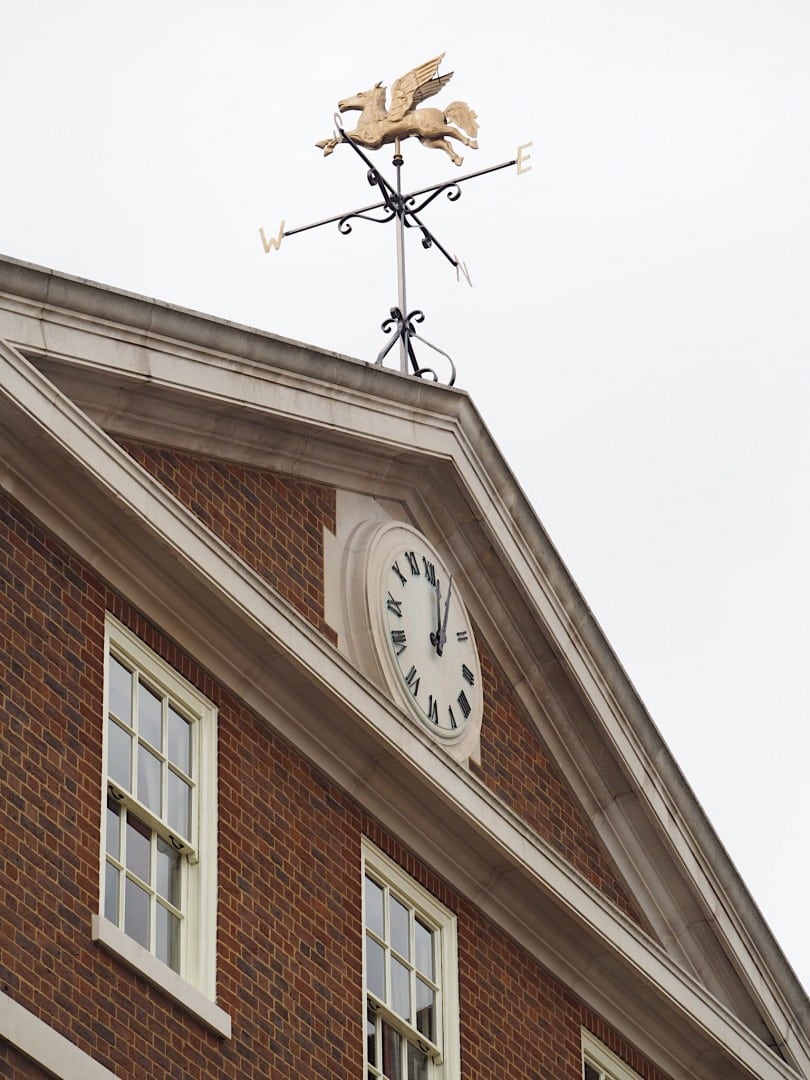 Explore more of this magical London neighbourhood in my post here.

Probably the most famous of London’s unusual weathervanes is that of Father Time at Lord’s Cricket ground. The figure of Father Time removing bails from the wicket was a gift from Herbert Baker, architect of the grandstand in 1926. The image is from the Laws of Cricket code “After the call of Time, the bails shall be removed from both wickets.” 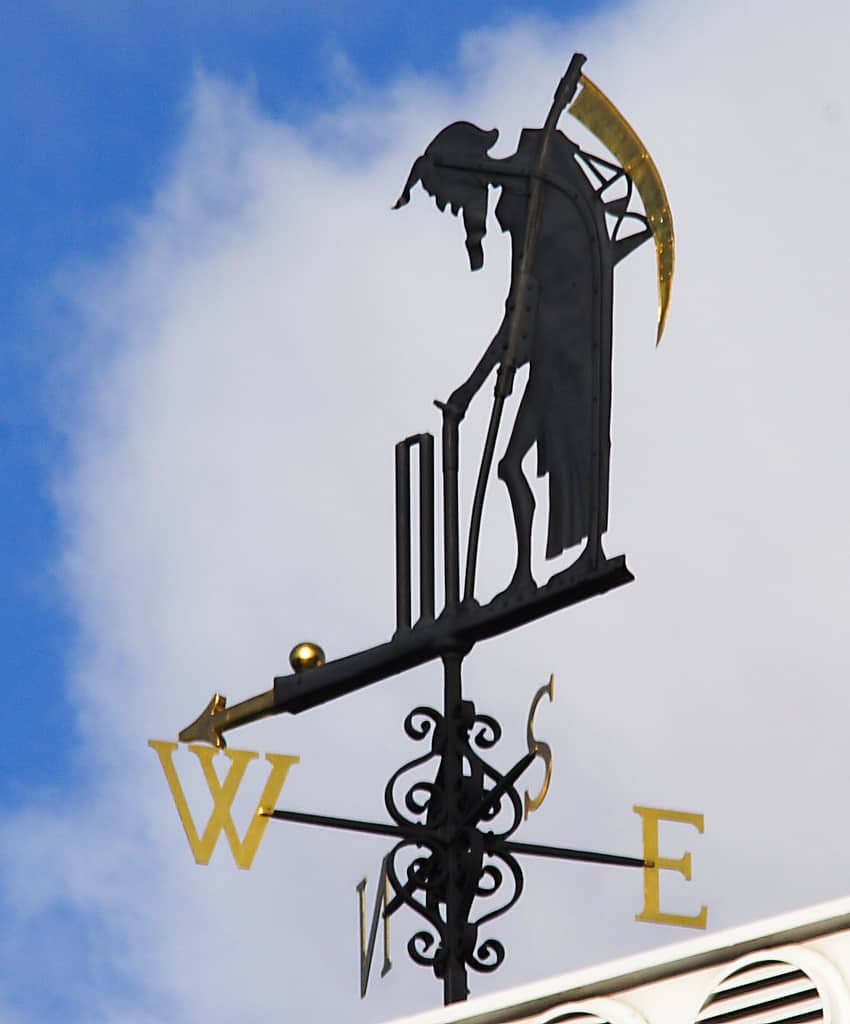 The dragon is the symbol of The City of London, so it’s fitting that St Mary Le Bow is graced with a monstrous creature atop its steeple. The church (rebuilt by Wren and then gutted during The Blitz) reopened in 1964, but the golden dragon dates from 1679. 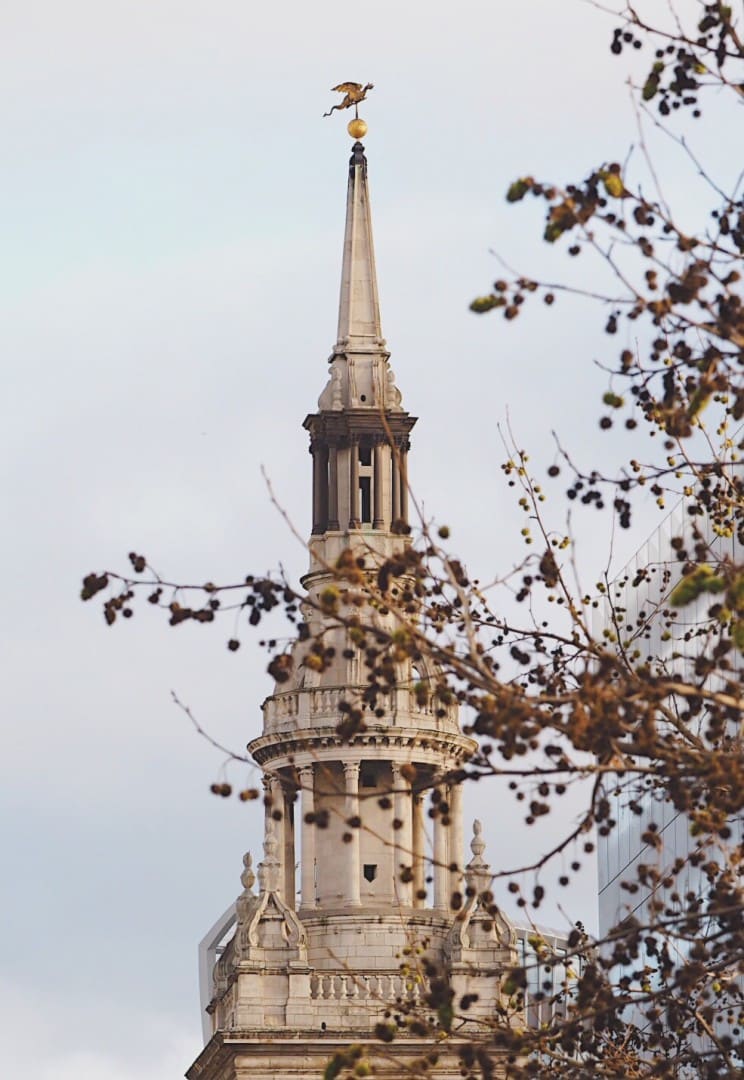 But the fact that always blows my mind is that it’s around 9 foot long! Another fearsome dragon, almost an exact copy in fact, can be found South of the river…

One of the ‘Waterloo Churches’ (paid for with money from the Battle of Waterloo, 1815) St James’ Church was finished in 1829. 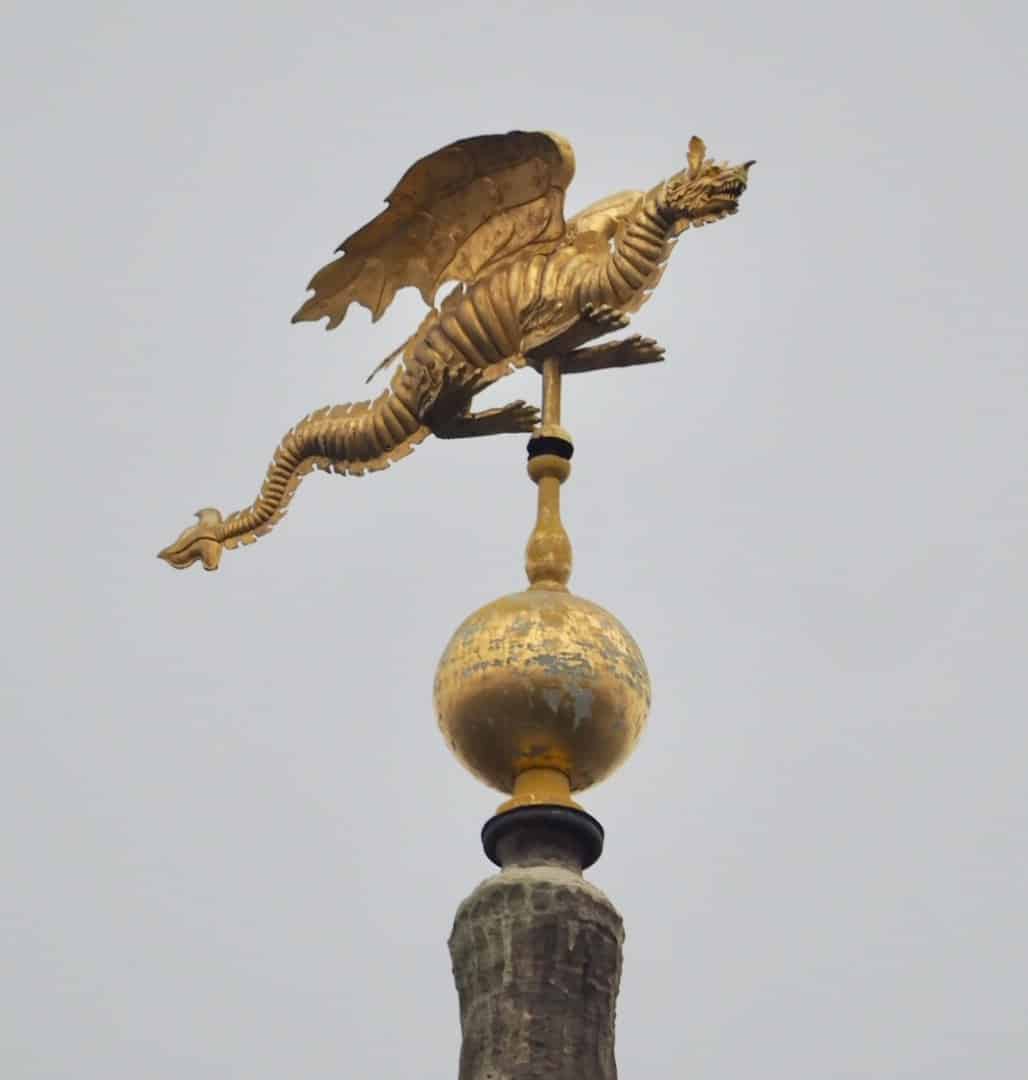 It’s not exactly clear why the Bermondsey church has such an ostentatious (and scary!) golden dragon and one vicar even went so far as to say he’d rather have a more locally-themed weathervane. Pie and Mash for example! 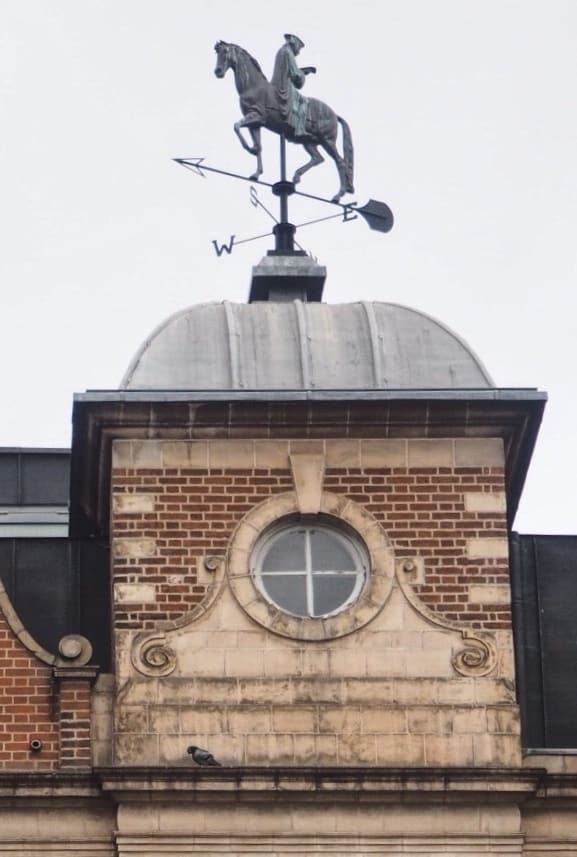 Along Whitechapel Road, look up to spot the curious figure of Erasmus, engrossed in his book and sitting backwards on his horse. Specially commissioned, the weathervane is by Rodney Graham and was installed in 2009. Read more about the building’s history here.

Do you have any other favourites I’ve missed? Let me know in the comments! And, as ever, keep looking up! 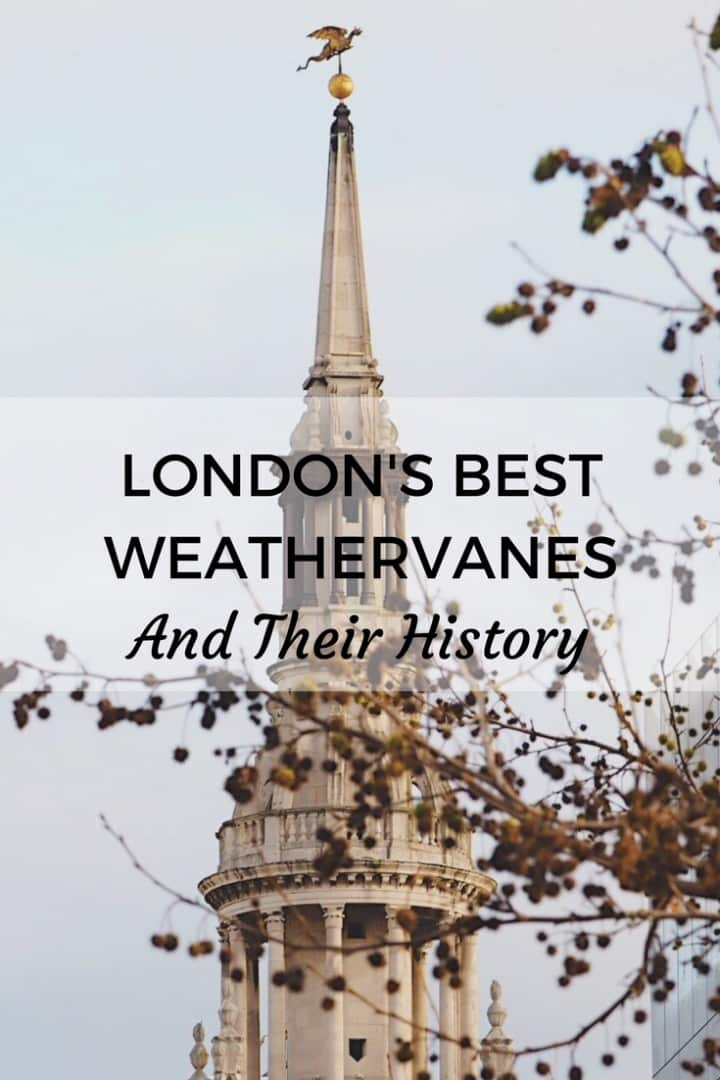