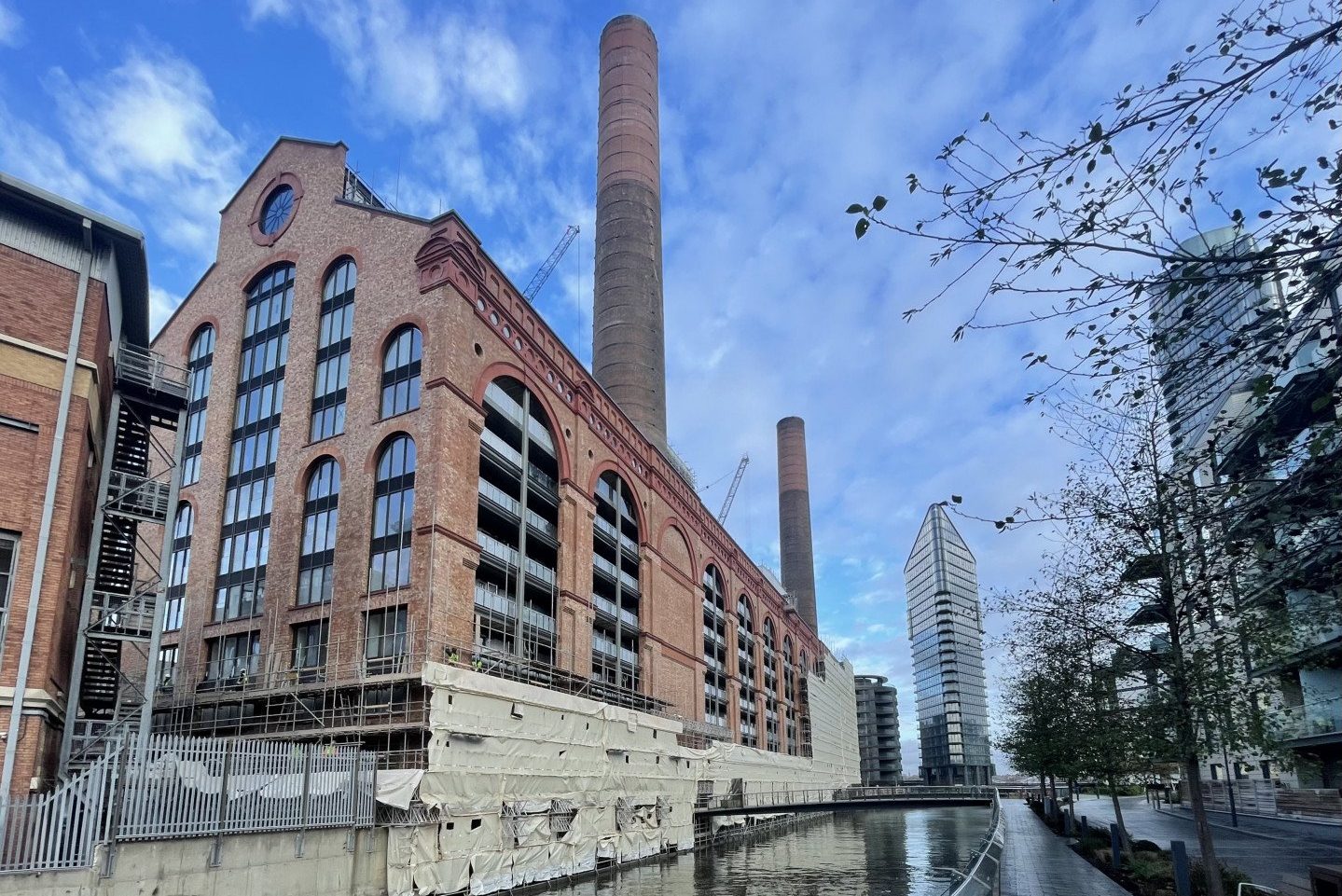 Not quite as famous perhaps, but this fascinating place is currently undergoing its own major renovation.

Derelict since 2002, It’s being transformed into Powerhouse, a luxury residential address complete with riverside restaurants, open space and even a swimming pool (probably for residents only I’m afraid!)

There were plans for a power station here as early as 1897, spurred on by Brompton & Piccadilly Circus Railway (B&PCR) who were the forerunner to the Piccadilly Line. However, in 1898 the District Railway (today’s District Line) bought B&PCR and then in 1901 both were sold to the American Financier, Charles Yerkes.

Before 1902, London was awash with various underground and railway lines all owned by different companies. Yerkes founded the Underground Electric Railways Company of London Limited (later known as The Underground) which consolidated these various lines and upgraded them. One of his major projects was the electrification of the District Line.

Lots Road opened in 1904, designed by James Russell Chapman, an industrial giant on the banks of the Thames at Chelsea Creek.

The boxy, brick base and towering chimneys look very similar to the later ‘cathedrals’ to industry, Battersea (1933) and Bankside (1952) Power Stations.

Transport for London has some wonderful posters showing the magnitude of the project and celebrating its power. Eventually the station – which burned up to 700 tonnes of coal a day – would power most of the railways and tramways of the Underground Group.

In the 1960s, one chimney was demolished and another one soon followed in the 1970s.

However, the chimneys at Lots Road served another fun use, as helpers to the birth of commercial radio.

In October 1973 when LBC and Capital Radio were due to launch but their transmitters weren’t quite ready. So for two years they were broadcast with the help of an antenna strung between the two remaining chimneys!

In 1992 Lots Road was given its final notice, its machinery wouldn’t be refitted or refurbished so it would be defunct when those gave out. Today the electric power for London Underground is managed by National Grid.

Just as with Battersea Power Station across the Thames, the Lots Road development seem keen to retain the original design features.

The two chimneys will be kept as part of the design but sadly I don’t they will have anything similar to Battersea Power Station’s Lift 109 – where you can ascend 109m in a glass elevator!

Here’s my picture from the view at the top.

Speaking of aerial views, this part of Chelsea was once famous for hot air ballooning, specifically at Cremorne Gardens.

This Pleasure Garden was particularly popular in the mid 19th century and hosted various large scale events and spectacles until local residents complained and it was closed down in 1877.

The image below shows Pauline Violante who walked across the Thames to Cremorne Gardens on a tightrope in 1861!

Today you can find a much reduced Cremorne Gardens on the banks of the Thames, a short walk from the Lots Road Power Station.

Sadly there aren’t many reminders of these weird and wonderful stunts in the area, although you can find the pub which was once called The Balloon Tavern. Below is an image from 1951.

And here is a similar view today, the pub is now called Lots Road.

Back to the present day, it’s rather pleasant to walk around the site at Chelsea Harbour (although technically in Fulham) and appreciate the arched brick details.

They have been lovingly restored and, personally, I think it’s a beautiful-looking building.

You can see more photos from inside the working power station from the developments website here as well as some wonderful interior photos on this website.

The development is scheduled to be finished later in 2023 so perhaps it will be worth visiting again then. Maybe they should arrange some balloon flights and tightrope walkers for the big opening event?!

Have you been around this site or to the new Battersea Power Station? I’d love to her what you thought in the comments!