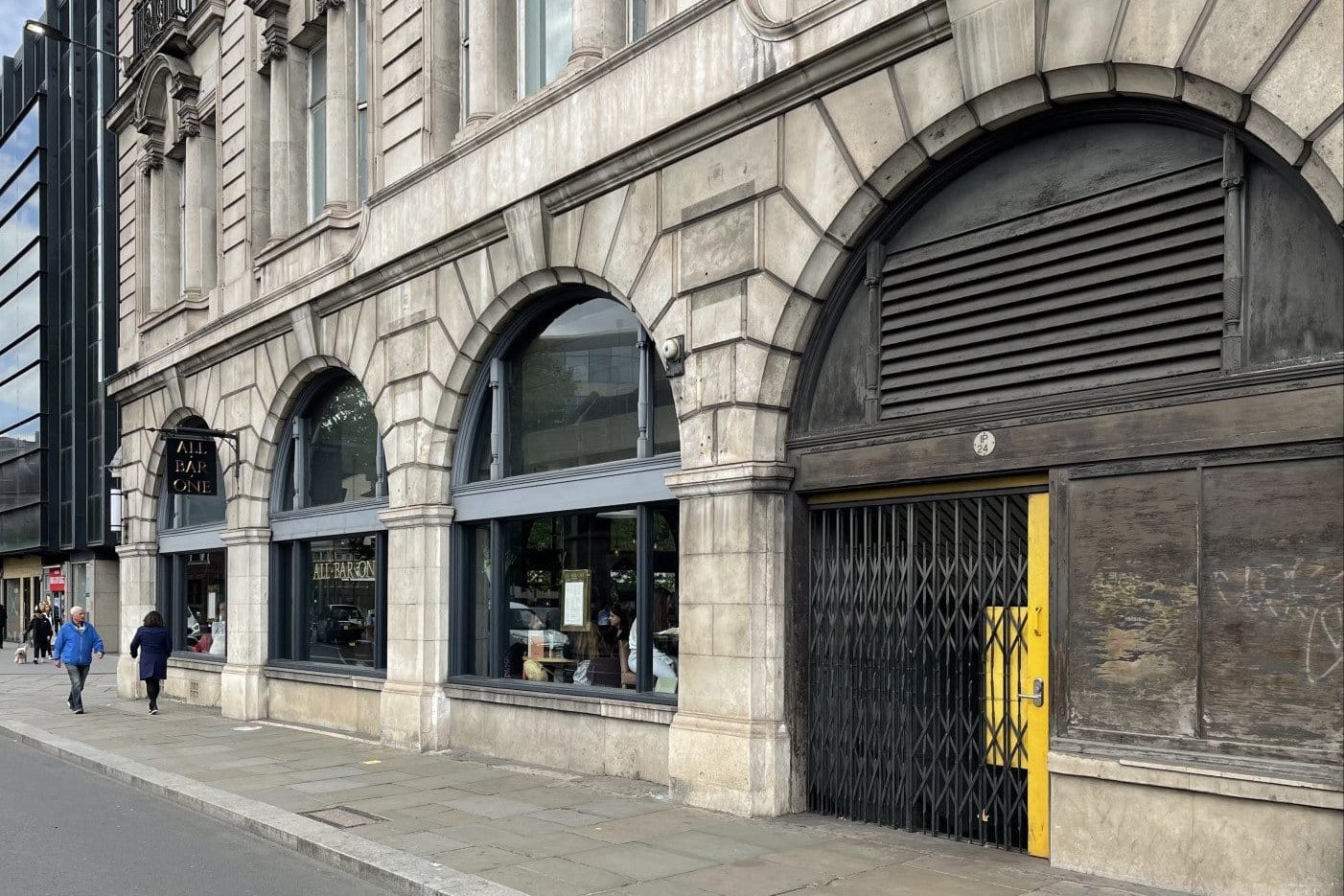 As you walk along the traffic-packed Byward Street, with All Hallows Barking, the Tower of London and Tower Bridge in the distance, it’s thoroughly understandable that you’d miss a ghost station hiding in plain sight.

Above is the former Strand Station at Aldwych, viewed from Surrey Street. Read about my tour inside here.

Mark Lane Station didn’t have those lovely tiles and instead housed some stone-faced offices. Today, it’s occupied by a branch of All Bar One.

As ever, the history of London stations is a little bit complicated.

The Metropolitan Railway opened an underground station called ‘Tower of London’ in 1882.

This was originally going to be called Seething Lane (the site being on the corner of Seething Lane and Great Tower Street) however they named it Mark Lane.

Mark Lane is a surviving nearby street – originally a corruption of Marthe Lane – and was apparently named after some unknown ‘Martha’, first recorded c.1200.

On the OS map from the 1890s below I’ve circled the Mark Lane Station in red and in blue you can see the short-lived Tower of London Station (but more on that shortly).

Byward Street was laid out between 1882-4, cutting through the existing Great Tower Street towards Trinity Square in alignment with the Metropolitan Railway Line below.

The original station was a small and simple structure. Here’s an image form the London Transport Museum dating from 1897.

In the early 1900s the station was absorbed into a new office building.

The ground floor was designed by George Sherrin, 1909 and the upper storeys were offices, added later in 1911 and occupied by Messers van den Bergh, a Dutch company that manufactured margarine!

Built on a budget, the narrow platforms couldn’t handle the stream of tourists intent on visiting the Tower of London. In 1946 the station was renamed Tower Hill and then in 1967 a new station called Tower Hill was built, near the site of the original Tower of London Station from 1882.

What Survives of Mark Lane Station?

As well as the building itself, there are several clues worth looking out for. Firstly, you can see the former entrance to some steps down to a pedestrian subway.

The alternative entrance can be seen on the opposite side of the street;

A more sneaky detail can be found by looking closely at the frontage on Byward Street. There are faded square spaces between the arches where Metropolitan Railway signage would’ve been placed;

Meanwhile around the corner on Seething Lane there’s a former entrance and if you look above the door you can make out the faded ‘Mark Lane Station Entrance’.

The real question of course, is whether there’s still a station of sorts underground and it turns out there is! If you keep your eyes peeled travelling between Tower Hill and Monument on the District or Circle line, you can spy the station from the carriage.

Here is a very blurry image I captured;

Happily, I found a jaw-dropping video on YouTube of an urban explorer going down into the old station. I love the fact the door was just left unlocked!

So there you go, the surprising Tower Hill ghost station hiding in plain sight!