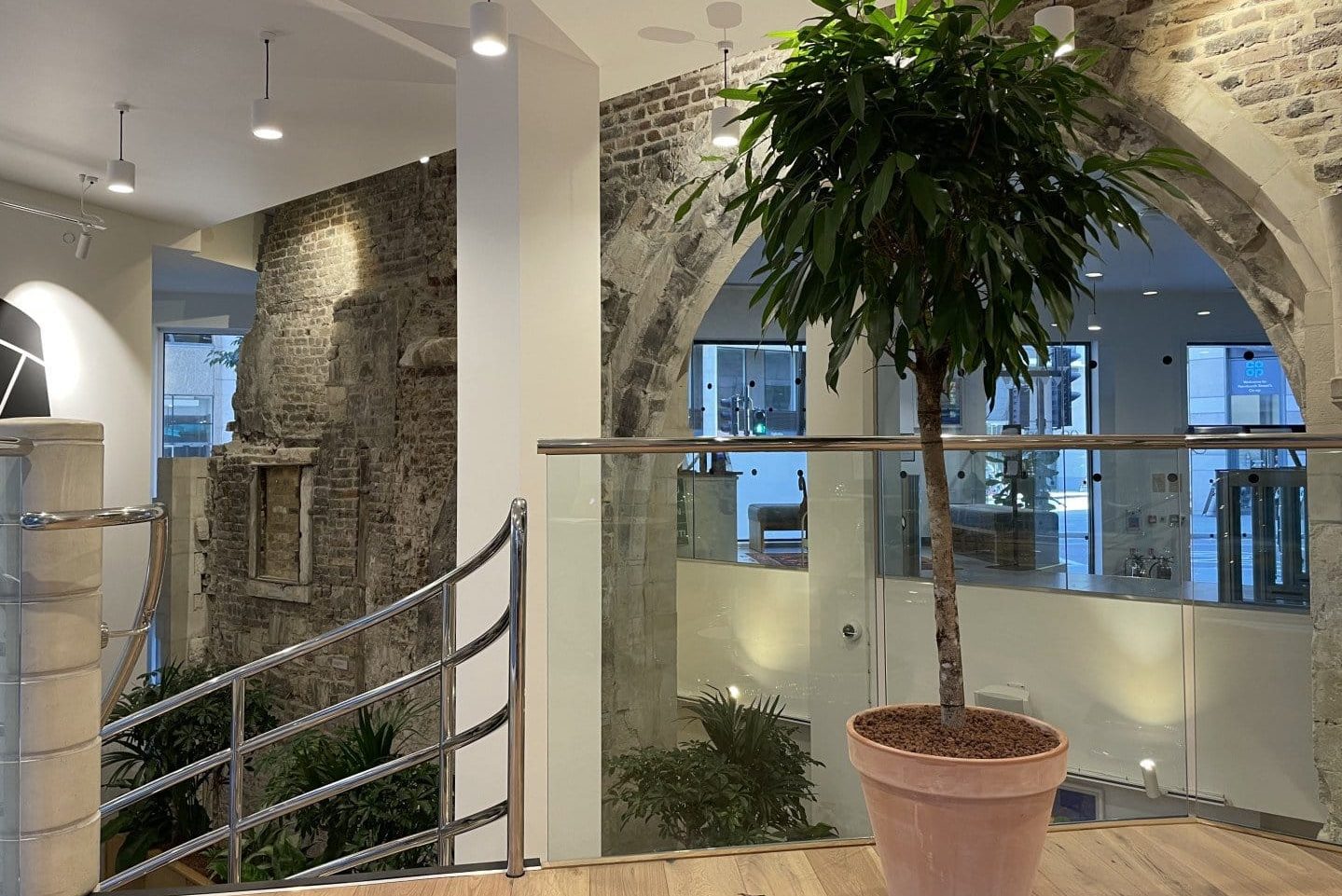 The Medieval Priory in an Aldgate Office Block

Transport a 12th century monk to Aldgate today and there’s very little that they’d recognise. However inside this office block you can find a tiny part of an epic Medieval Priory where they’d feel right at home!

If you’re passing 77 Leadenhall Street, peer through the windows at street level you can see a large stone archway inside.

The Holy Trinity Priory was founded in 1108 by Queen Matilda, the wife of King Henry I. By 1200 the site was full of impressive stone buildings including a large church.

On a nearby plaque in Mitre Square you can also see this image of a reconstruction of the site as it would’ve appeared around 1500.

Clearly this was an important site in the city, as the entrance to the chapter house was the burial place of Henry FitzAilwin, first Lord Mayor of the City of London (referred to as simply Mayor until 1347).

You can find a Victorian statue of Henry on Holborn Viaduct.

But with power and influence came a short and sharp demise. It was the first Augustinian priory to be dissolved under orders from King Henry VIII in 1532.

The land and property then passed into various hands through the centuries including Thomas Howard, 4th Duke of Norfolk. He was executed in 1572 for his involvement in the Ridolfi plot, a plan to assassinate Queen Elizabeth I and put Mary Queen of Scots on the throne.

The London Metropolitan Archives has an 1824 print of the ruins of the Priory which conveys the haphazard nature in which these buildings were torn down and repurposed.

There were excavations undertaken in 1977 and 1990 by the Museum of London Archeology team (MOLA) and some of the remains were factored into the new office building at 77 Leadenhall Street.

Today the office is owned by wework. If you ask nicely at the front desk they might just let you see inside.

Wedged between glass partition walls and contemporary art you can find a section of wall with a large Gothic arch.

It dates from the 14th-15th century and once connected the South Aisle of the choir with a side chapel. I don’t believe the remains are listed by Historic England but there are labels attached to the wall indicating its antiquity and the 19th century additions such as a former window and chimney flute.

In amongst the contemporary furnishings, one delightfully incongruous scene is the table football table right beside the stonework.

As mentioned above this is a private office space so not regularly open to the public, although the arch is visible from Mitre Street off Aldgate High Street.

Around the corner is Mitre Square. Aside from the name and a couple of plaques there are precious few clues that this was once a huge priory.

Sadly, more recent events have made Mitre Square notorious. In the early hours of 30 September 1888 the Wolverhampton-born Catherine Eddowes was found dead, victim of a murderer who would later become known as ‘Jack the Ripper’.

Catherine was described as a bright and cheerful child with a lovely singing voice but as she grew up she was a rebellious teen, fired from her job and getting into a tumultuous (and eventually abusive) relationship. In the Summer of 1888 Catherine had been hop-picking in Kent but returned to her precarious London life of uncertain shelter, food and warmth. Arrested for drunkenness and held in Bishopsgate Police Station, she was found dead within an hour of her release.

I offer regular Feminist Jack the Ripper walks in which we share the stories of these unfortunate women’s lives as well as celebrate inspiring East End women past and present. You can find out more here.