It narrowly missed out to the V&A as Art Fund’s Museum of the Year in 2016, but Bethlem Museum of the Mind is definitely worth a visit. Especially during  Mental Health Awareness Week.

“An abode for those that have fallen out of wit”
– William Gregory, Mayor of London c.1415

Its history began in 14th Century with St Mary Bethlehem in Bishopsgate (roughly where Liverpool Street Station is now) but the New Bedlam (a corruption of Bethlehem and where we get the word meaning a scene of uproar and confusion) opened in Moorfields in 1676. 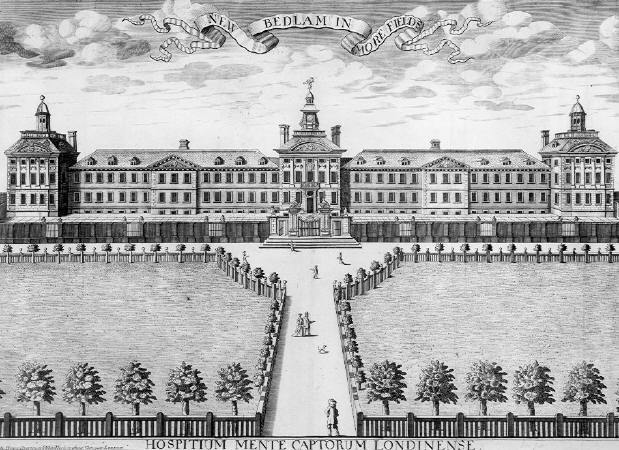 The above illustration supports the contemporary descriptions of John Evelyn who called it “magnificently built and most sweetly placed in Moorfields.” It looks more like a grand art gallery than an institution and, in fact, it was the ‘inmates’ (deemed with ‘incurables’ or ‘curables’) that were on display.

This would become obvious as you approach the gates and see either side of the entrance, the so-called ’brainless brothers’ depicting acute raving and opposite him, melancholy. 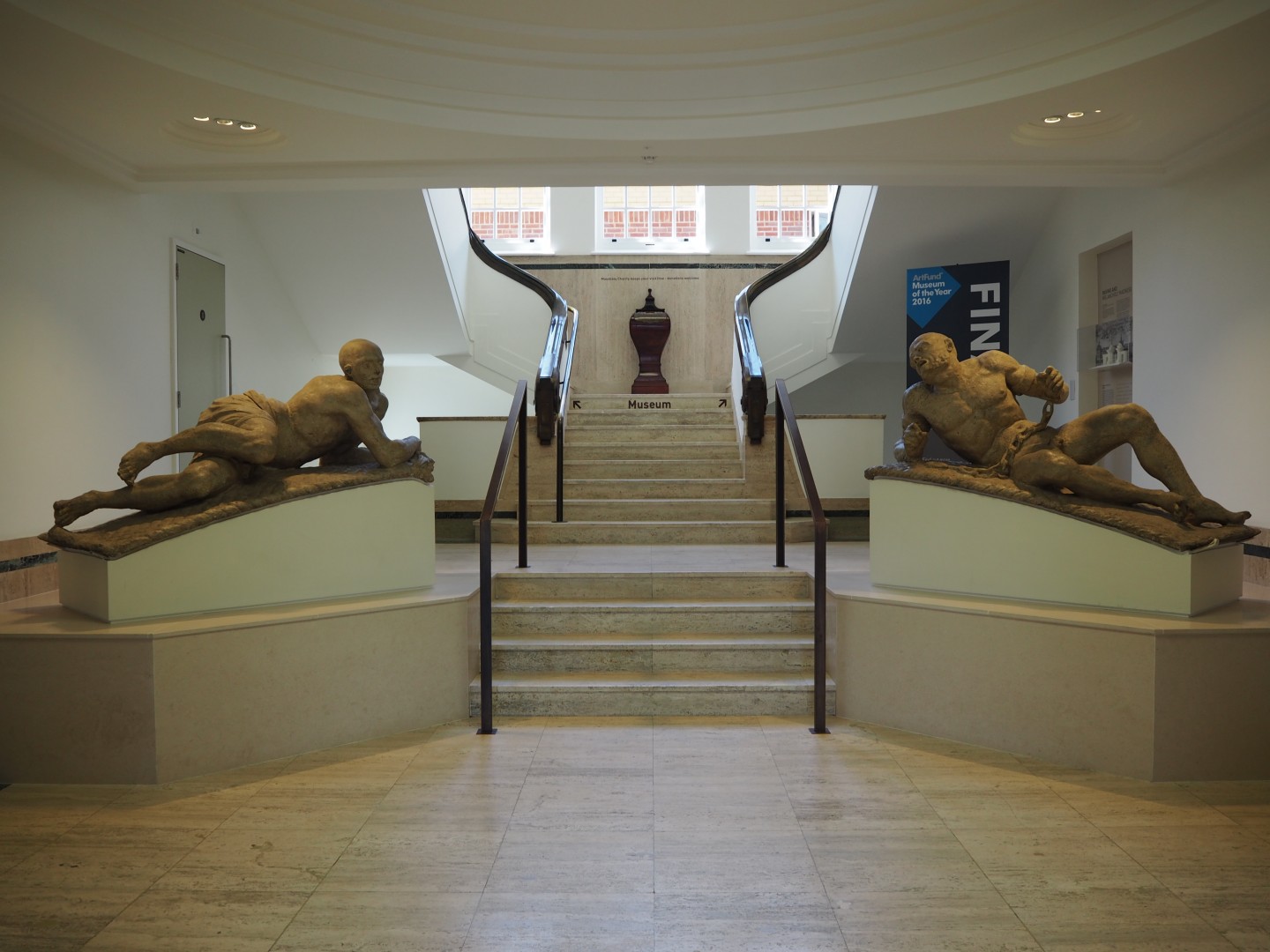 Inside the entrance of Bethlem Museum of the Mind, restored Portland stone sculptures by Caius Gabriel Cibber c.1676 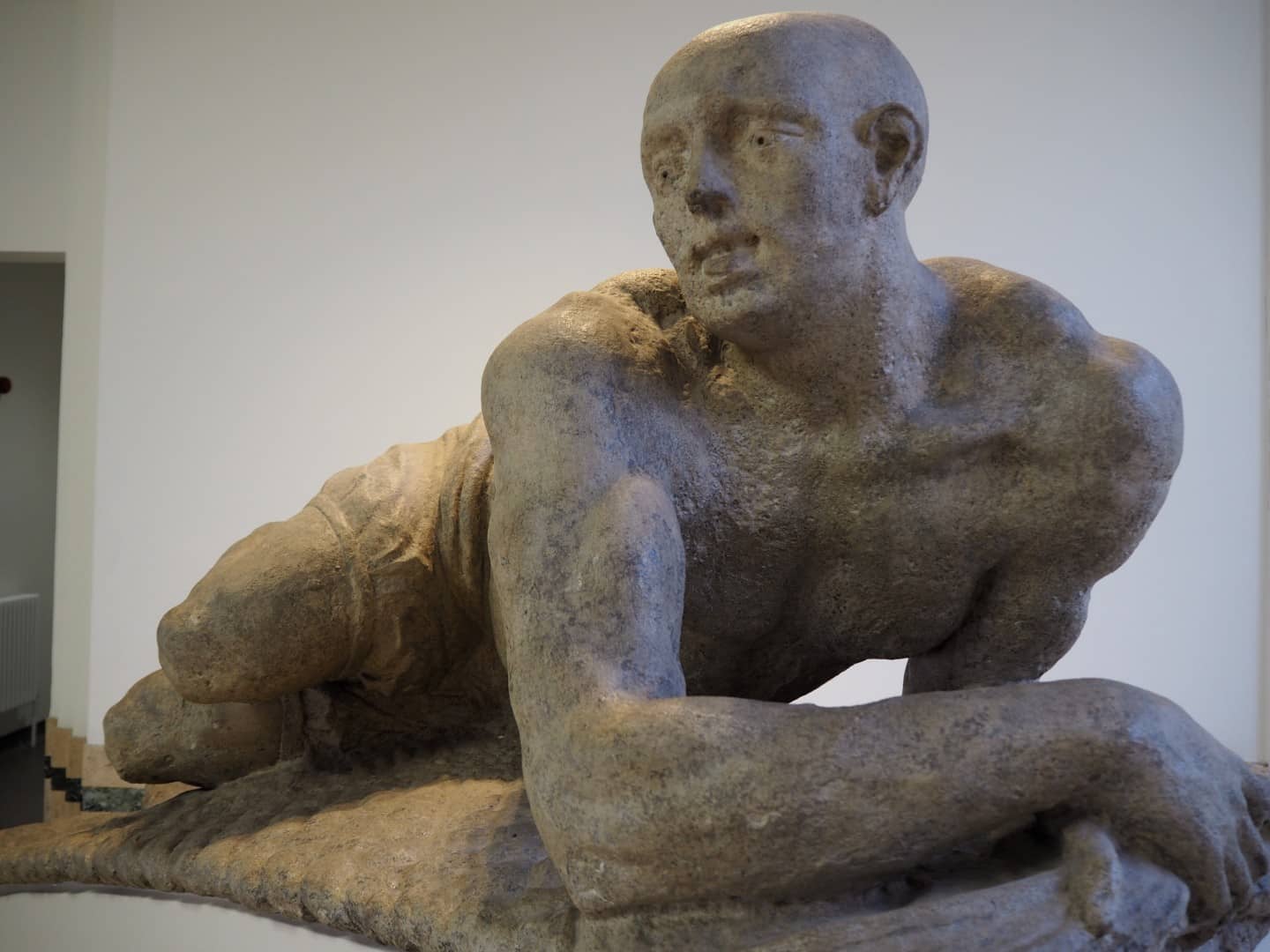 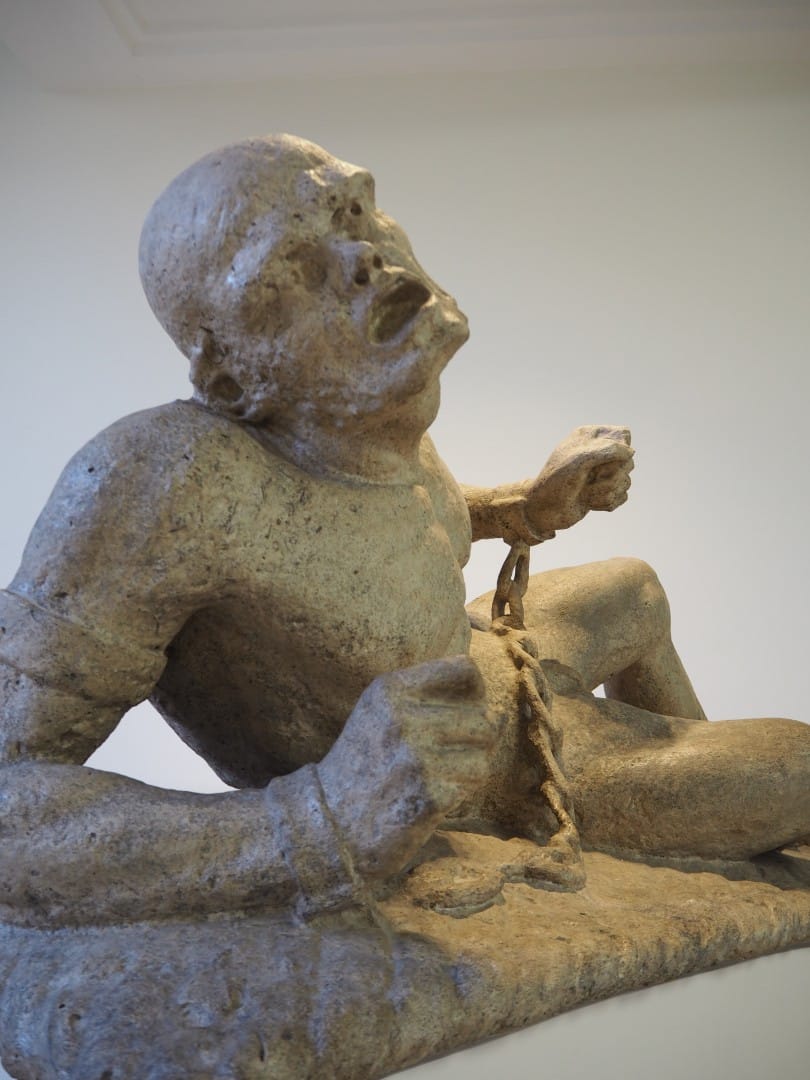 To give us an idea of the experience of visiting this institution in the 17th and 18th Century, Dr Matthew Green, in his excellent book; London A Travel Guide Through Time describes the scene with the following;

‘Such a rattling of chains, drumming of doors, ranting, hallooing, singing’ that it seemed as though the dammed had broken free from her, according to the London Spy

It has also been immortalised by Hogarth’s ‘In the Madhouse’, one of the engravings from the series; A Rake Progress. Our young protagonist Tom Rakewell is shown, head shaved, amidst a chaotic scene and looking a lot like the melancholic statue we know from the entrance gates. 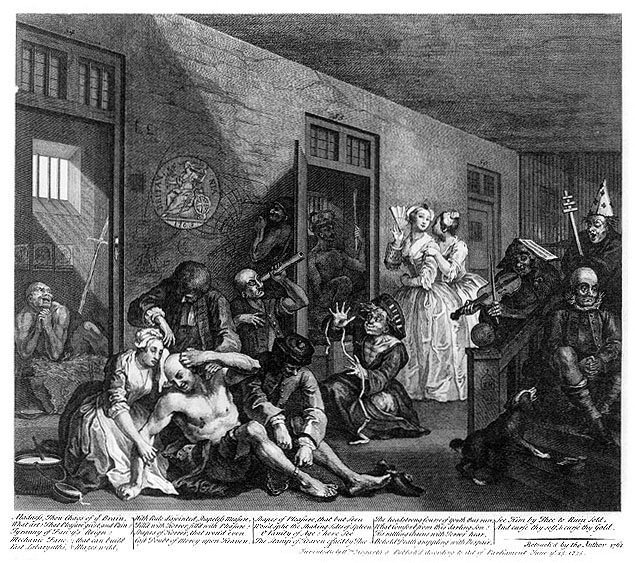 Around 1814 Bethlem was moved to St George’s Fields , Southwark (where the Imperial War Museum now stands) and in 1930 it moved to its current location in Beckenham where it’s still the functioning NHS hospital, Bethlem Royal Hospital. 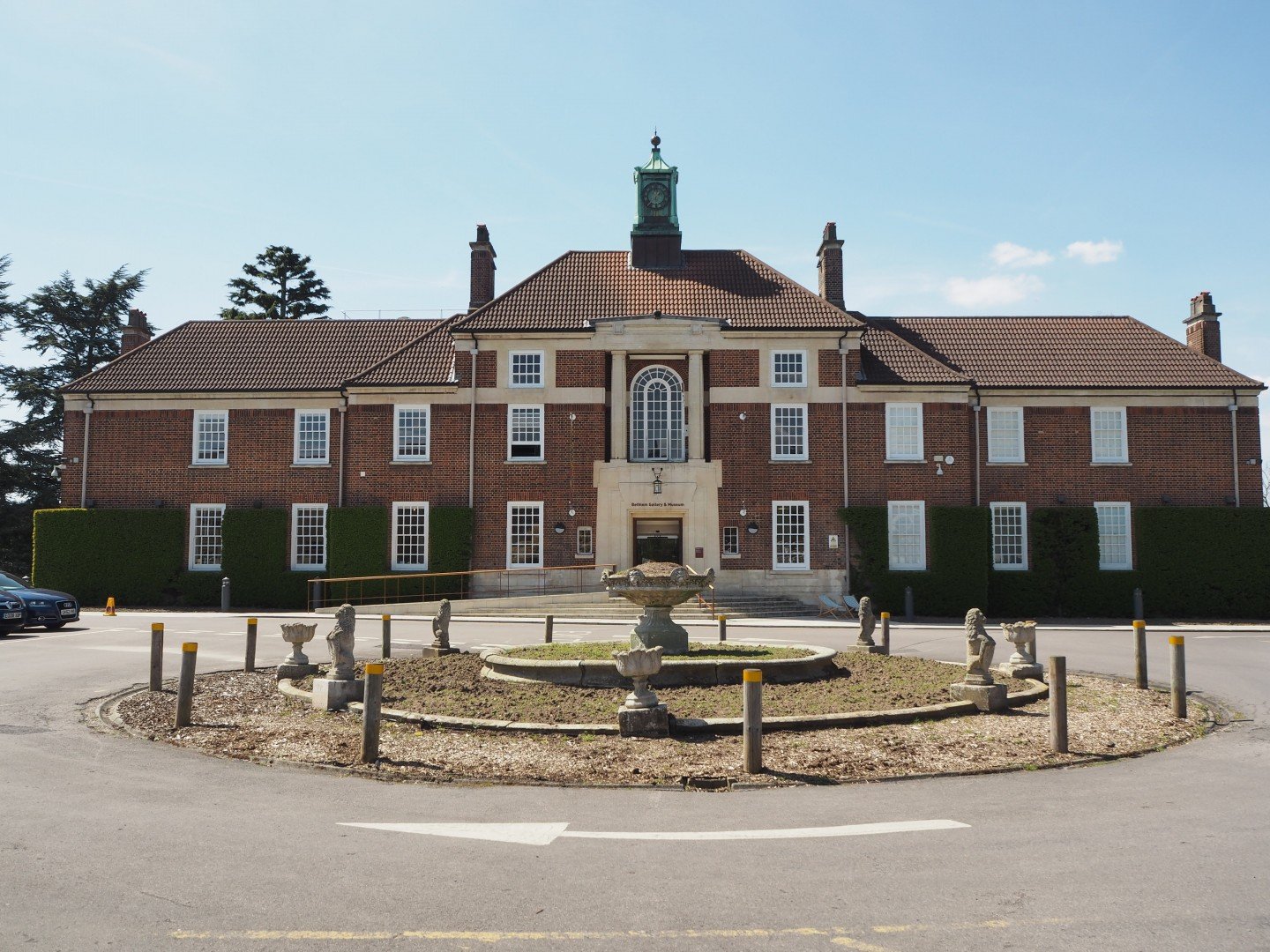 The Bethlem Museum of the Mind opened in 2015, showing the history of the hospital as well as the history of mental health in London and England. It incorporates art from the Bethlem Gallery (est. 1997) which showcased work by artists who have experienced mental distress and temporary exhibition spaces. 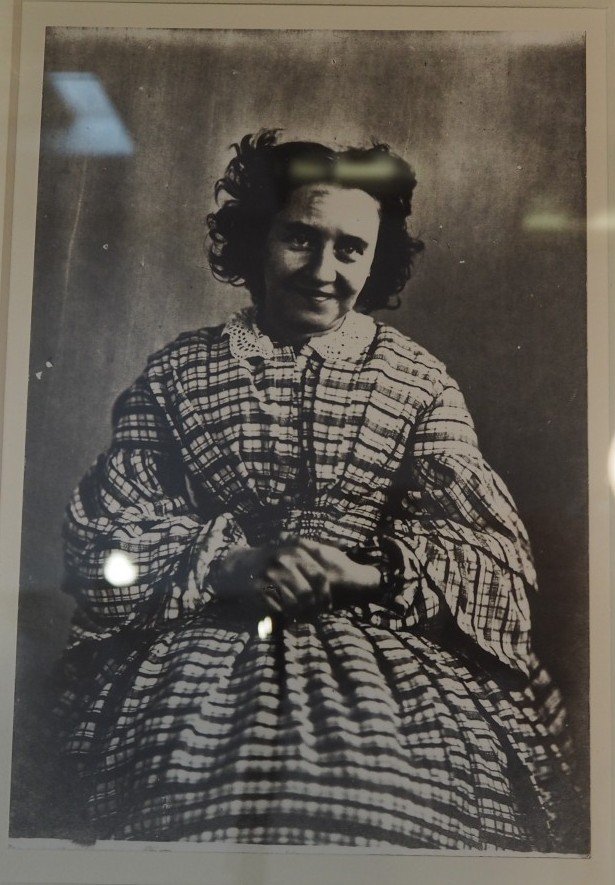 In the late 1850s, with photography being a relatively new invention, the social photographer Henry Herring chose a selection of patients to photograph, probably to help doctors with their diagnosis. It was unusual for someone to be smiling and looking directly at the camera as the sitter had to remain still for a long period of time. 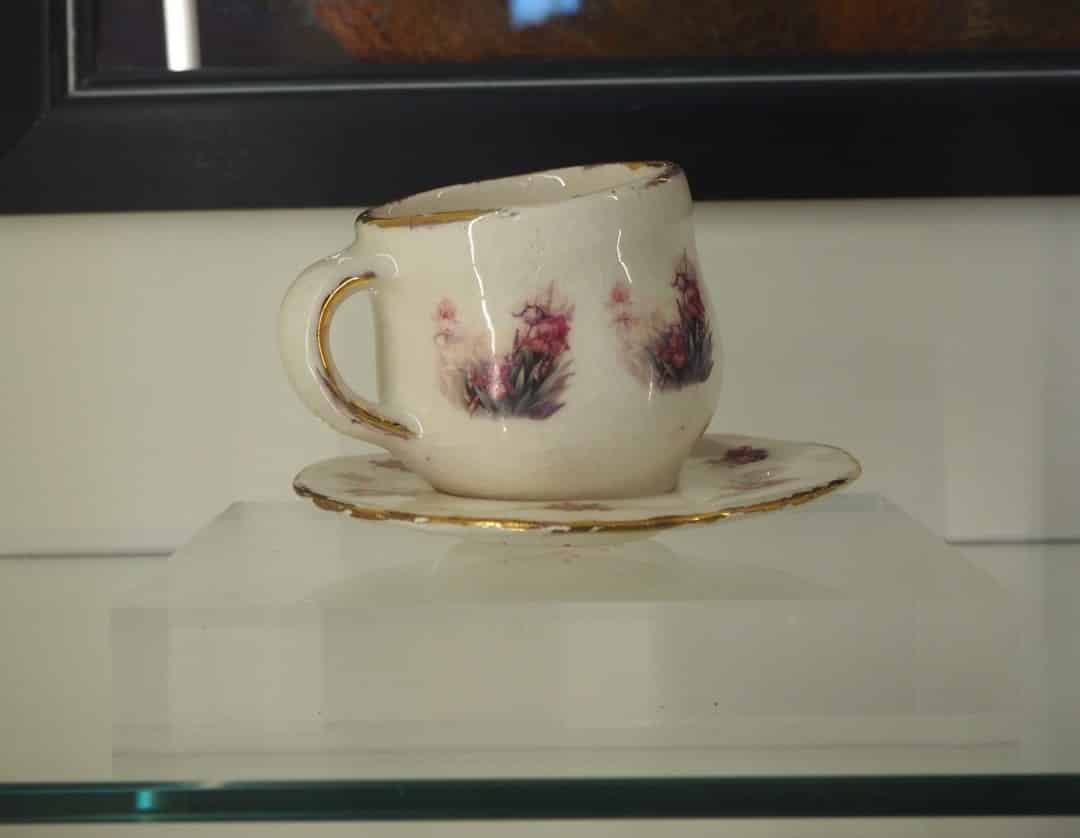 In 2012, Irene Balaam created this piece of ceramic as a response to her experience with Electric Shock Therapy (ECT);

“I remember 6 of us going in a little mini bus to Warlingham hospital, all walking down a long corridor it seemed never ending but we got chairs all in a circle and sat wiating one by one for a turn. After the ECT we was taken straight to the chairs, even though we were crying an shaking – other patients were trying to console each other – saying – we’ll be alright, I was handed a cup of tea and saucer and it was china nad I could see from the markings on it that they were Royal Doulton and I was terrified of dropping this cup and saucer, I was very confused, the nurse tried to reassure me that I was ok and I couldn’t wait to get home.”

Sadly Irene passed away before she had the opportunity to see her work on display in the new permanent gallery.

What struck me most about the displays in the gallery is the sensitivity and dignity which which objects are treated. Care has been taken to fully remove from the gallery any sense of voyeurism left over form its history.

However, that’s not to say that some items aren’t shocking. Shackles worn by James Norris alongside an illustration are on display, but are carefully placed behind the information, seen by a mirrored image; 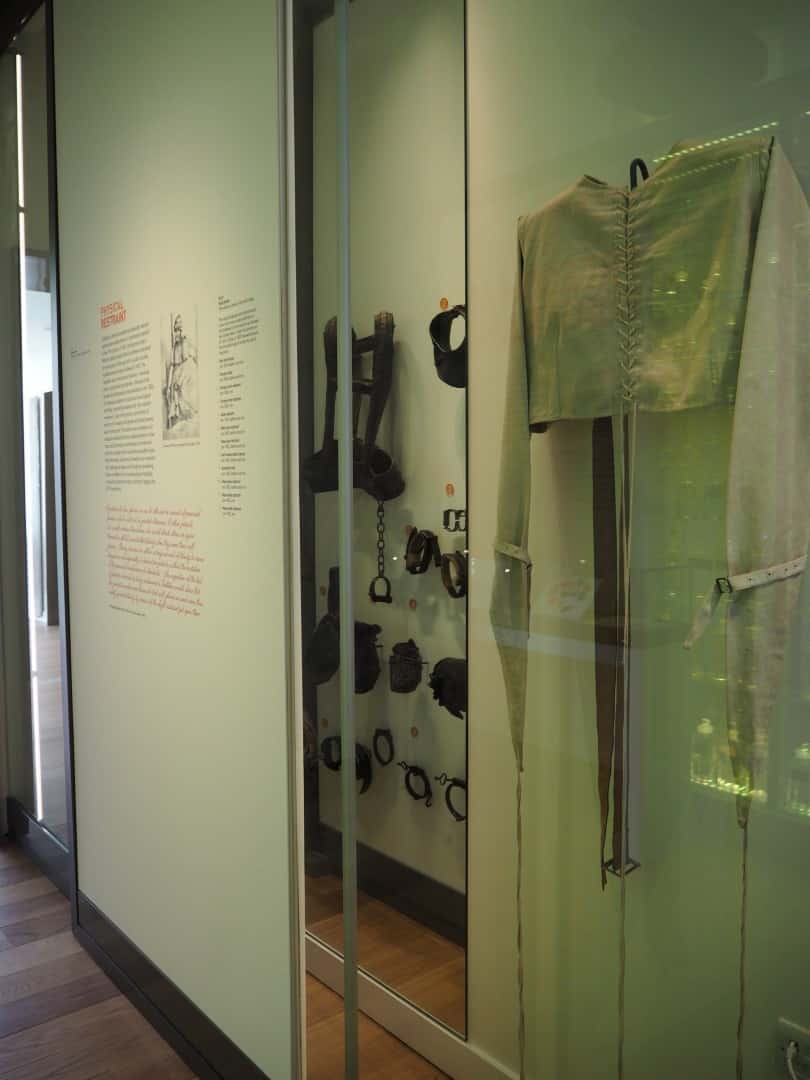 The manacles relate to the case of James William Norris, a Bethlem patient from c.1815 who it emerged had been continuously restrained for a decade, severely restricting his movement. 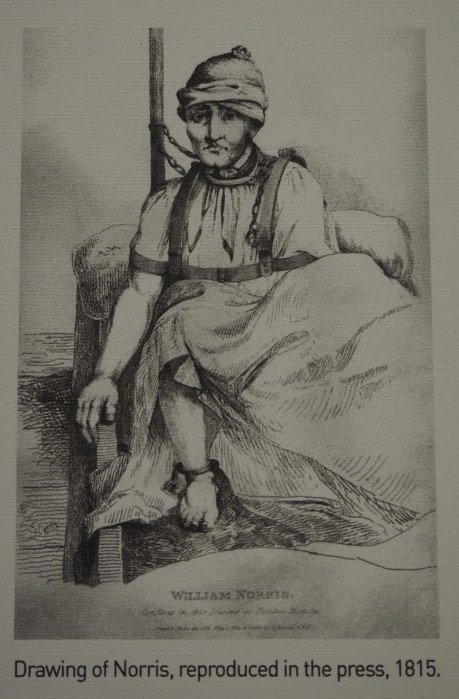 These revelations led to reform in the way lunatic asylums at the time were run. 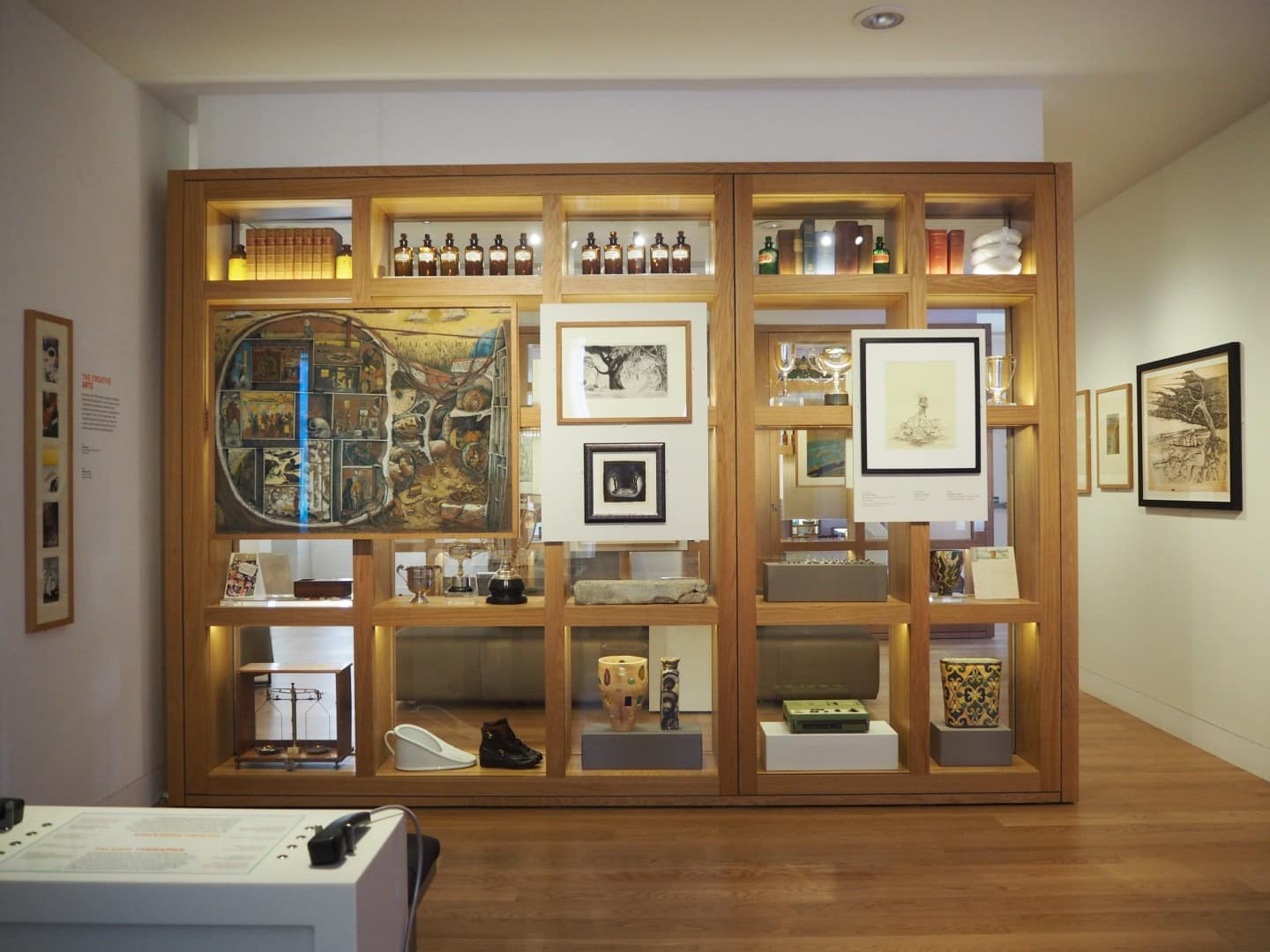 Since the early 19th Century patients have had the opportunity to use the arts as a way of expressing themselves creatively, with some finding it therapeutic release. This is shown alongside the historic objects. 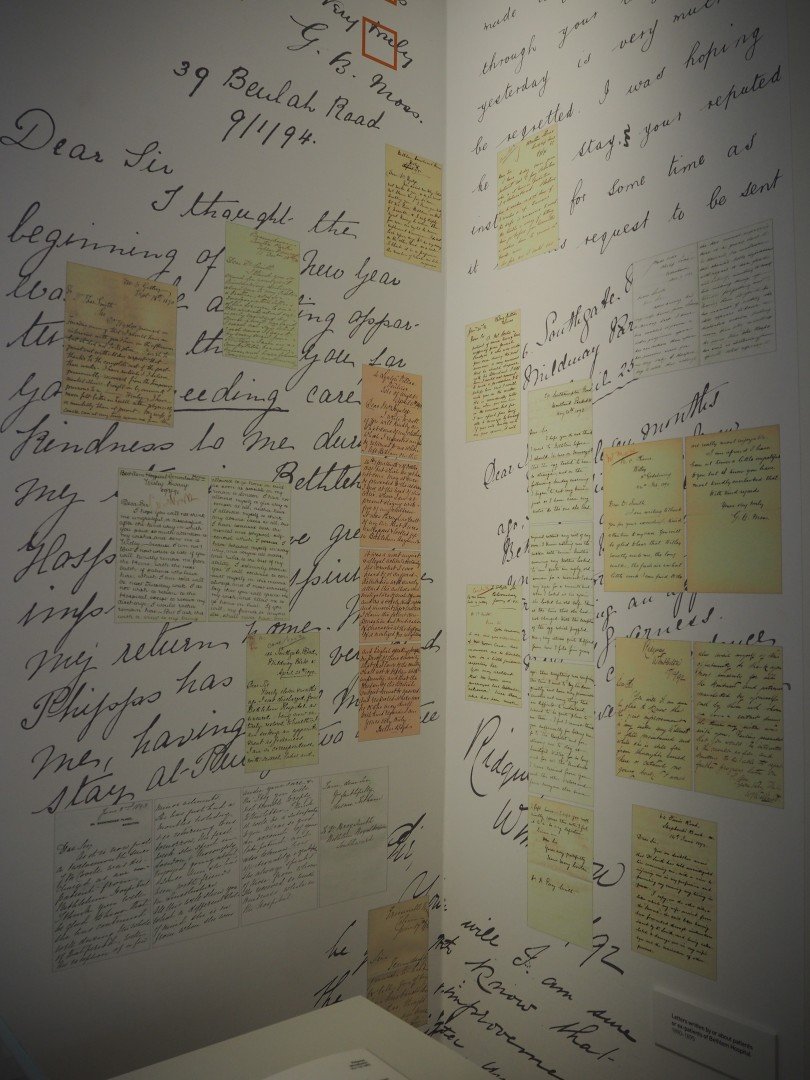 Another personal touch to the gallery are the collection of letters written by patients and relatives, a reminder of the individuality of the patients and allowing them to reclaim some of the dignity lost in the historic misunderstanding and treatment of those with a mental illness.

The Museum is free to visit and open to the public Wednesday – Friday as well as the first and last Saturday of the month.