Looming over the Royal Docks in East London is the derelict remains of Millennium Mills.

Built as flour mills in 1905, the mammoth factory buildings have been in stage of ‘just-about-to-be-developed’ since 2007 with nothing actually happening. 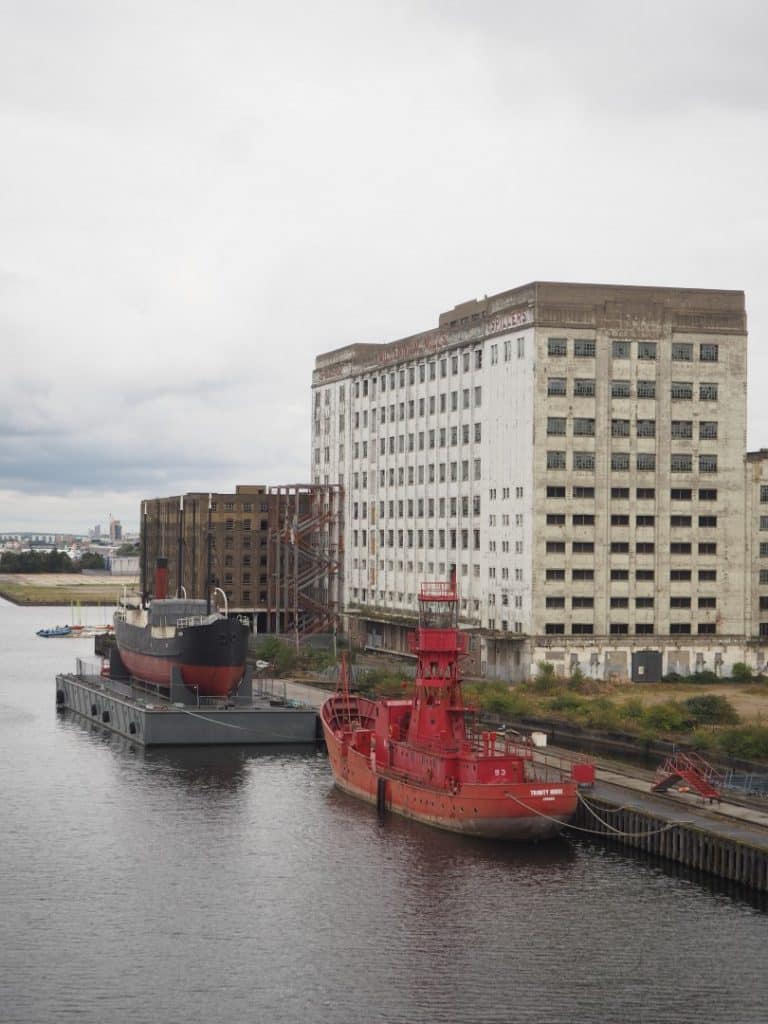 So what’s the story?

History of the Millennium Mills

When the Royal Victoria Docks were built in 1855, they became the largest centre of flour milling in London. Alongside two other earlier mills, Millennium Mills was established by Vernon & Sons in 1905. 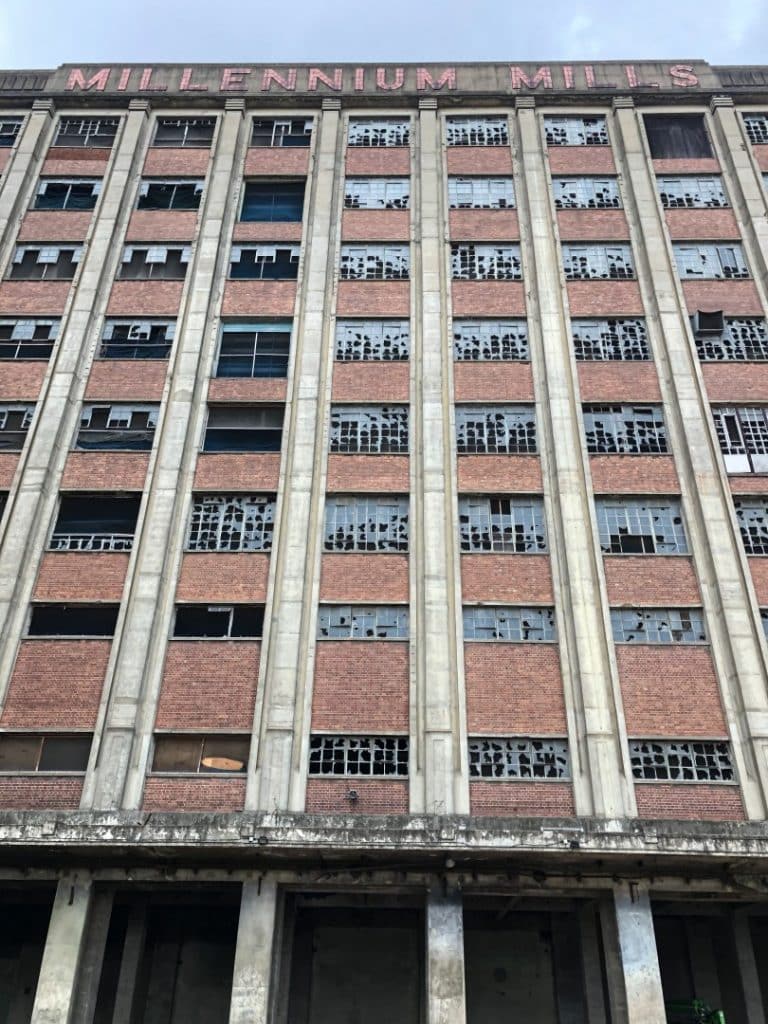 They converted imported grain into flour for the domestic market. They produced 100 sacks an hour and the mills were named after their most famous product; Millennium Flour which won the Miller Challenge Cup in 1899 at the International Bakers Exhibition.

The victory gave the brand world-wide fame and this new expansion into the South of England expanded the business from their Birkenhead base.

In 1917 catastrophe struck Silvertown when the Brunner Mond munitions factory exploded. 100 yards away from Millennium Mills, the buildings were decimated and 73 people died.

In 1920 Spillers took over the company and started to make dog biscuits and animal feed. In 1933 the Millennium Mills complex was rebuilt as you see it today in an Art Deco style. 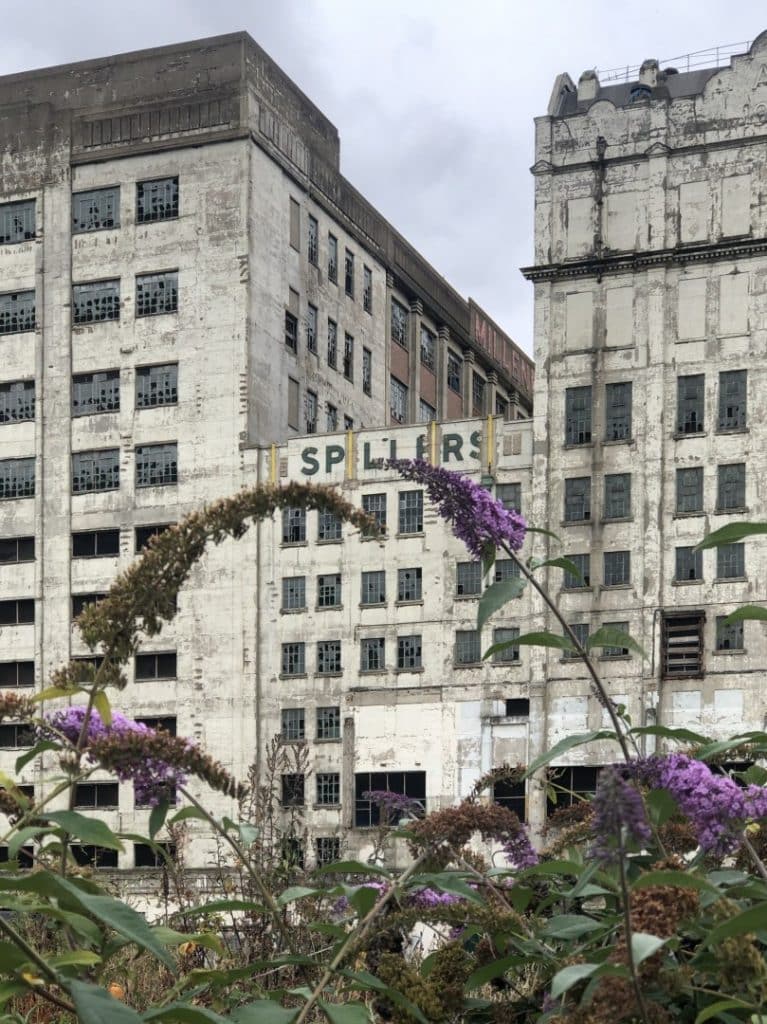 The buildings suffered bomb damage during the war and despite being added to and restored, it was only a matter of time before the Royal Docks closed in 1981. 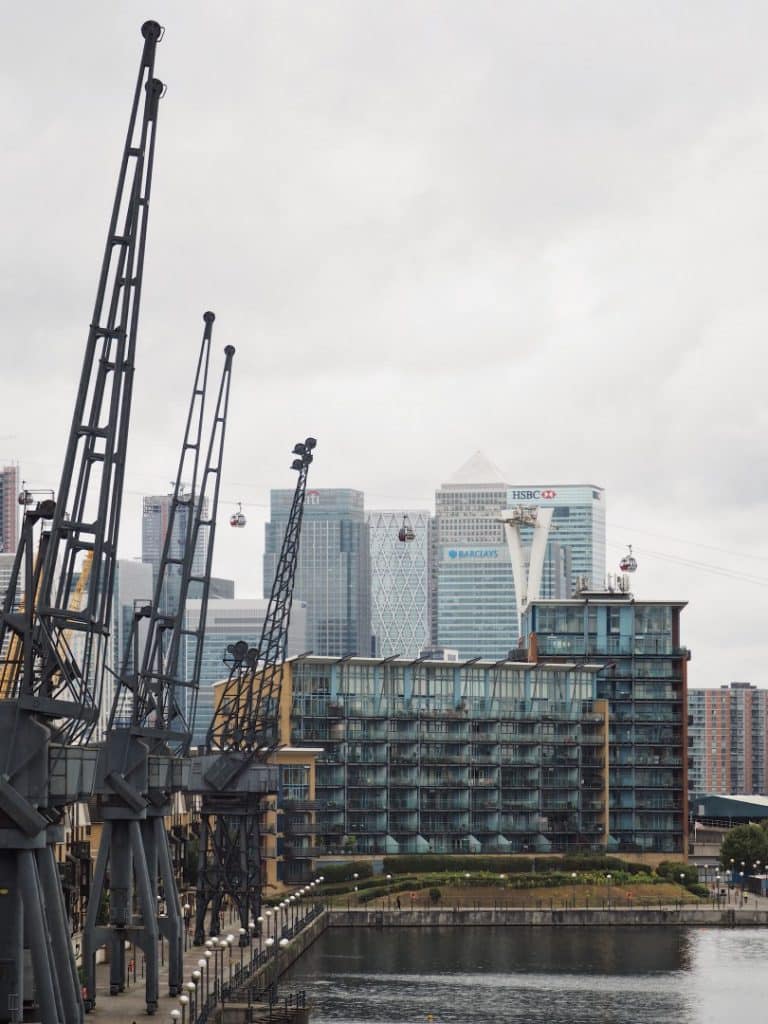 For Open House London this year, I got a chance to join a tour inside the Millennium Mills. 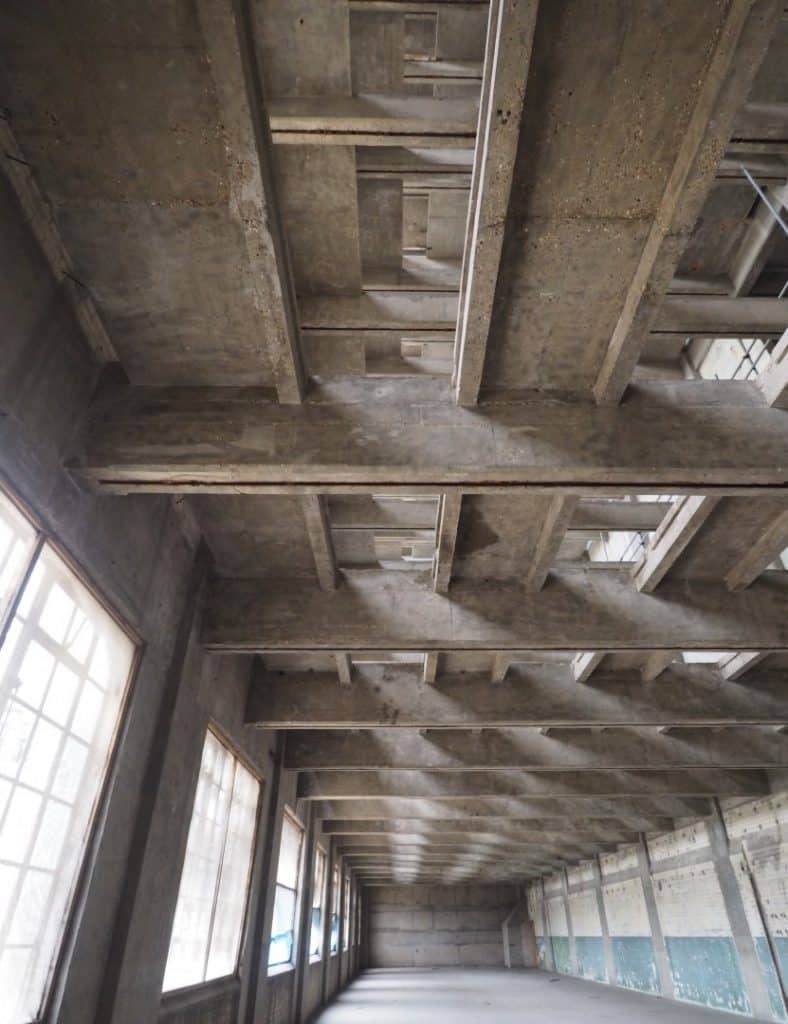 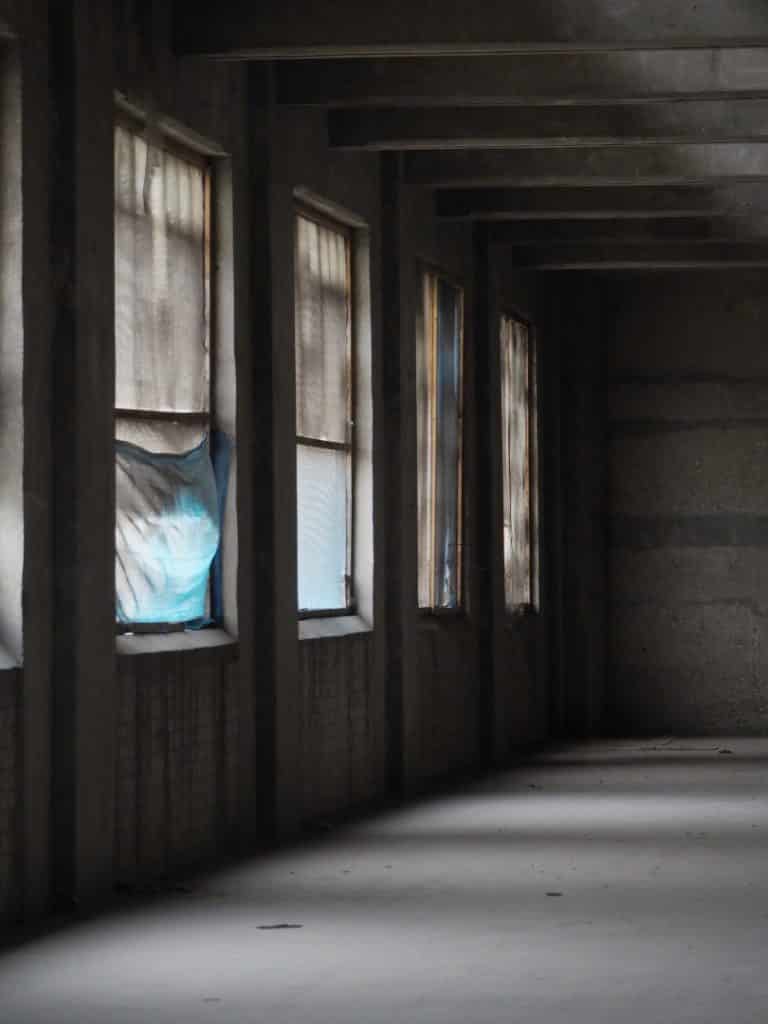 We could only safely go on a few floors and there’s no machinery, just cavernous rooms and the roar of City Airport planes to break the silence. 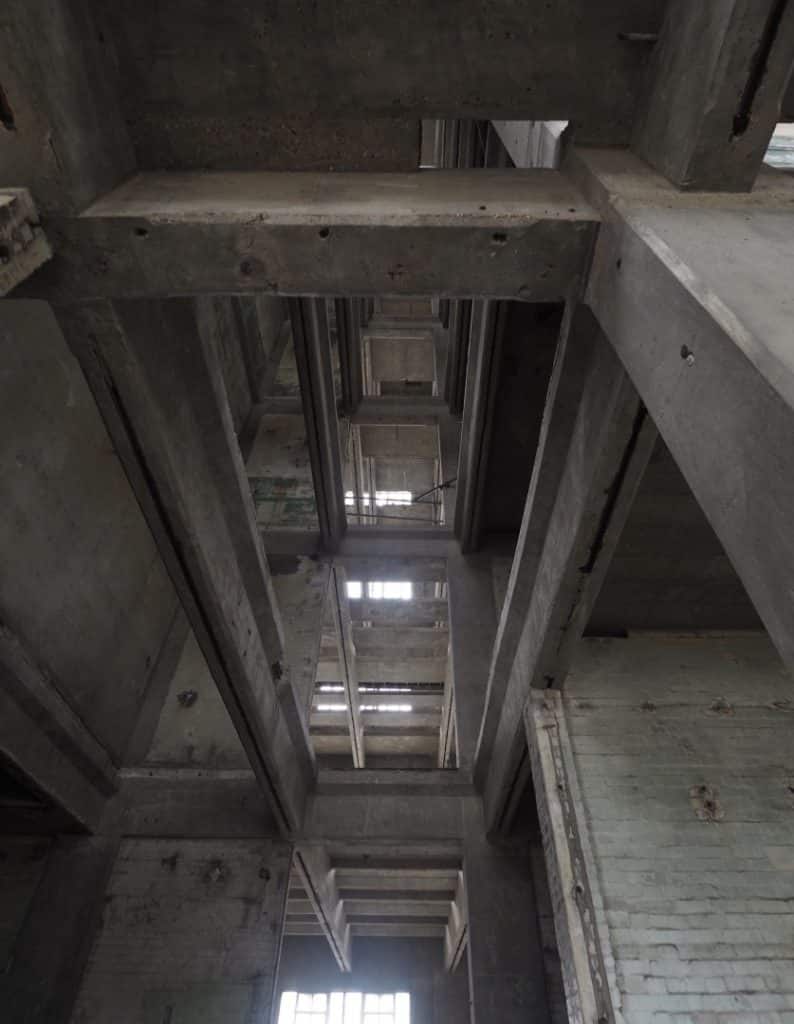 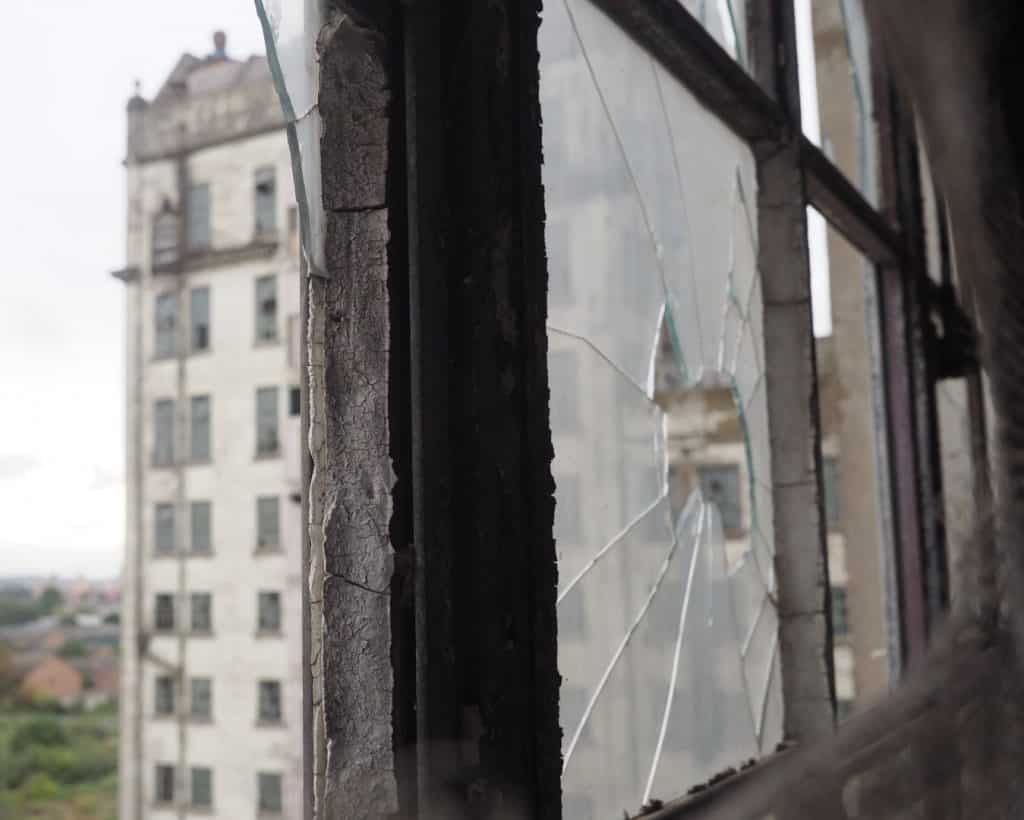 As atmospheric as the interior was, the real jaw-dropping moment came when we went to the rooftop. 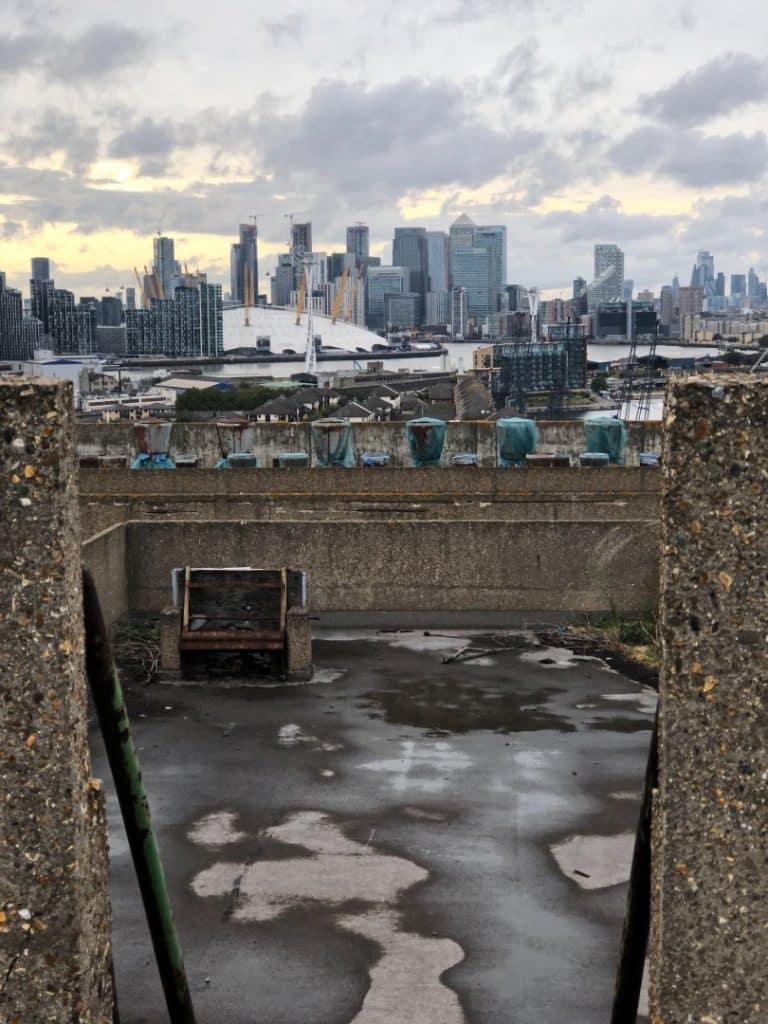 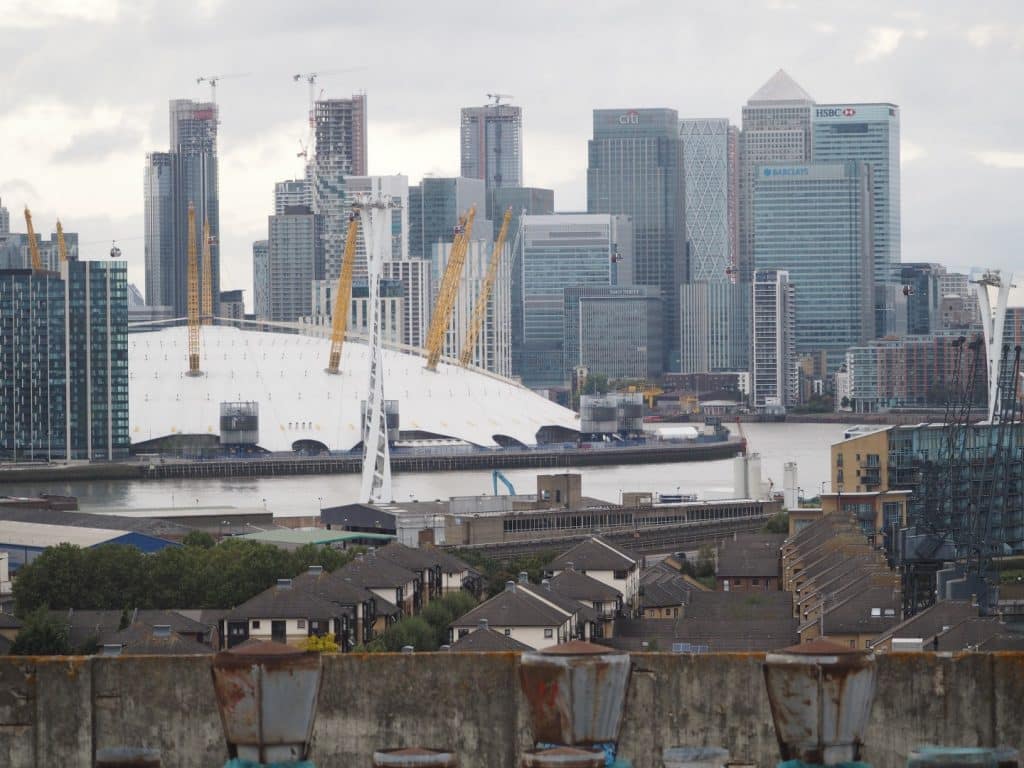 Essentially this is East London’s answer to the Battersea Power Station redevelopment.

The first regeneration project was proposed in 2001 and by 2007 a building scheme claiming to create 2,000 jobs and deliver 4,900 waterfront homes was proposed for £1.5billion.

By 2009 nothing has happened and the project was terminated.

Coinciding with the London 2012 Olympics the Millennium Mills site was redeveloped as the ‘London Pleasure Gardens’ but opened to reviews of being unsafe and unfinished. After 5 weeks (and costing Newham Council £4 million) the site went into administration.

In 2015 Newham Council again announced redevelopment plans and invited press to the site. There’s a Londonist video from this time but the only major update is that they’ve gutted the site and cleared away almost all the asbestos.

You’ve probably also seen it on the small screen. It was a regular filming location in Ashes to Ashes and has featured in London’s Burning and Luther as well as music videos from bands including The Smiths, the Artic Monkeys, Snow Patrol and Coldplay.

Undoubtedly it’ll be redeveloped at some point, but for now it’s like an eerie film set overlooking the Excel Centre. 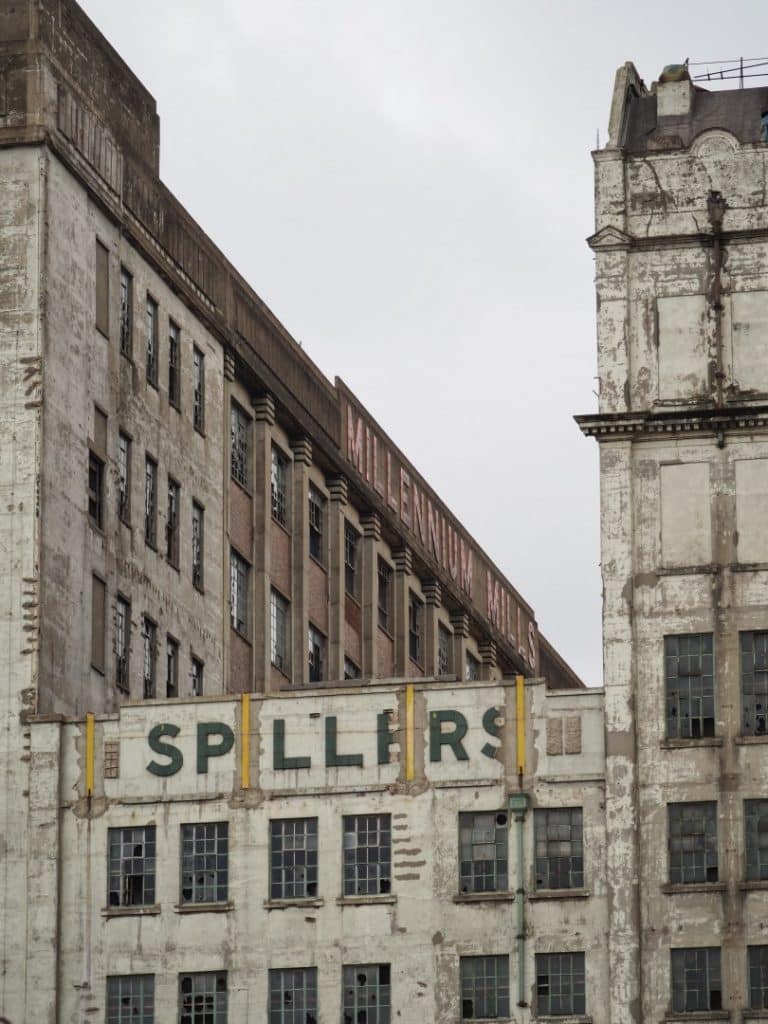 You can keep up to date with the progress of the Millennium Mills development and find out more about the Royal Docks area here.