On 24 April 2018 a statue of Millicent Fawcett was unveiled in Parliament Square, making her the first women to stand in that historic centre of politics and power.

The quote comes from speech made by Fawcett in the aftermath of the death of Emily Wilding Davison, the suffragette who threw herself under the King’s horse at Epsom Derby.

Around the base of the statue are photos of 59 key figures in the women’s suffrage movement, including 4 men.

Who was Millicent Fawcett?

Born 1847, Millicent Garrett’s family encouraged her (and sister Elizabeth – the first woman to qualify as a Doctor) to read widely, speak their minds and get involved in politics.

Millicent was a campaigner, not only for Votes for Women, but for a wide range of political causes. She became the President of the NUWSS (National Union of Women’s Suffrage Societies) in 1890, a suffragist organisation that promoted a peaceful, law-abiding approach to achieving women’s suffrage as well as abolition of the slave trade and overseas aid.

The more militant group; the suffragettes, were frustrated with lack of progress and under Emmeline Pankhurst were instructed to perform ‘deeds, not words’.

Statue of Emmeline Pankhurst in Victoria Tower Gardens, unveiled in 1930 and on this spot since 1958.

Millicent Fawcett lived to see the representation of the people act passed in 1918, allowing some women the right to vote. Speaking in the 1920s she said;

“It has all been ‘ups’ and no ‘downs’ … Ultimate success was certain. As if the fortress of ignorance and prejudice had already been surrendered.” – Millicent Fawcett 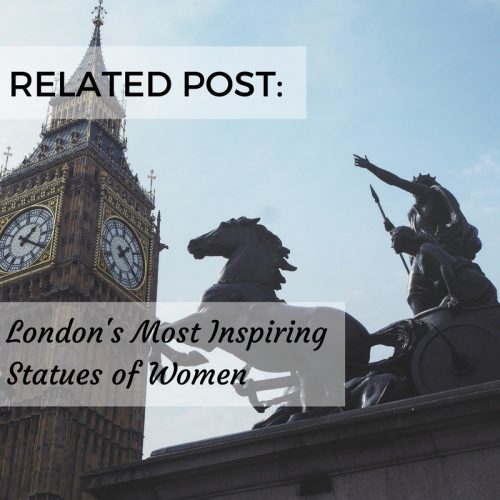 From 10am the crowds started to gather in Parliament Square, where flags of red, white and green (colours of the Suffragist movement) and purple (purple, white and green are suffragette colours) were proudly flying.

There was a sense of excitement in the air as people anticipated the unveiling, some with personal connections. I spoke to know woman, Eleanor Redshaw, whose grandmother had been imprisoned and force fed as a suffragette in Preston.

Today she was dressed as a suffragist in support of Millicent Fawcett.

The ceremony began with the Suffragist Singers, who sang ‘The March of the Women’ an anthem written for the Votes for Women movement and taken up as a battle cry by contemporary women.

A poem – inspired by the words, ‘courage calls to courage everywhere’ was written and read by Teresa Lola “This is for those that listen when courage calls”

Also speaking at the event was Caroline Criado-Perez, campaigner behind the project, whose online petition sparked the statue to become a reality.

Previously Caroline had also campaigned to have Jane Austen included on bank note when Elizabeth Fry was removed. On the subject of women’s visibility she said “The more that I read about the amazing women that have come before me, the more angry I am about why I didn’t know about them – why aren’t there statues of these people?”.

Theresa May and Sadiq Khan also made speeches after the statue was unveiled, and the event was finished with a performance from the cast of Sylvia, a new musical about the life of sylvia Pankhurst coming soon to The Old Vic.

So Parliament Square finally has a woman to accompany the 11 great men in the centre of London’s democracy and political power.

What do you make of the statue?