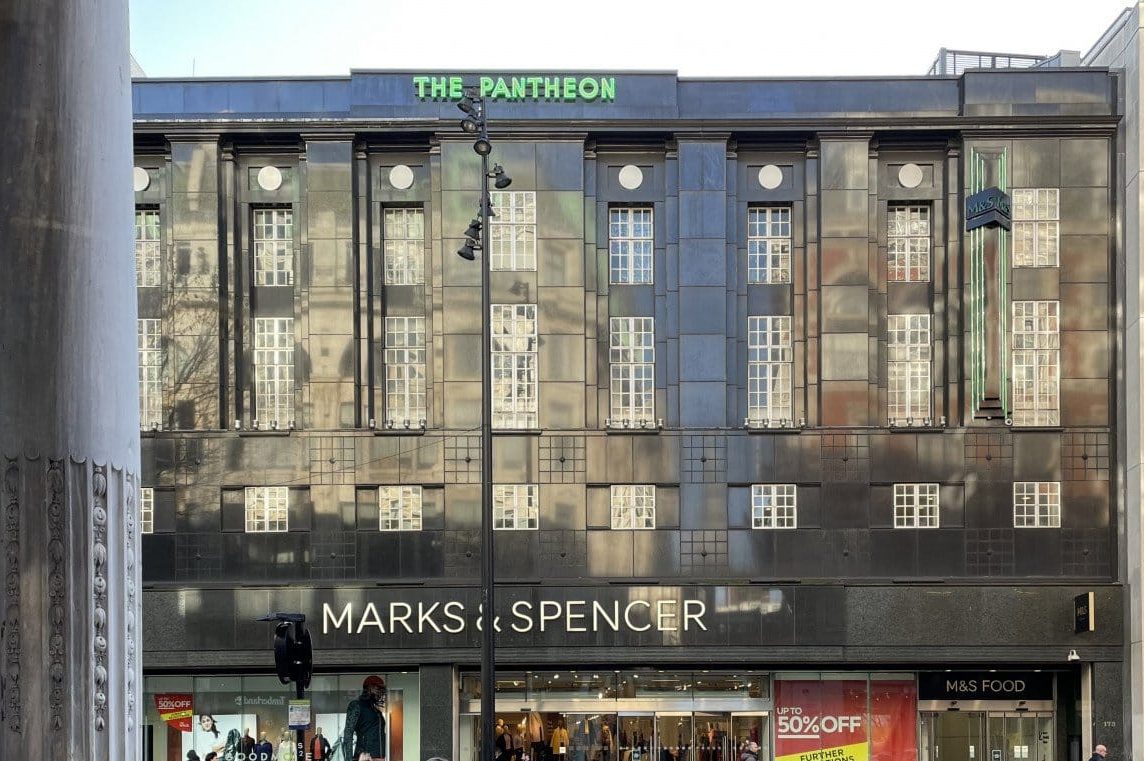 Oxford Street has a bad rep from Londoners, but there’s a surprising among of fabulous history if you know where to look. From a hidden little oasis to the more gruesome reminders at Tottenham Court Road and Marble Arch, often you have to look up for the historic clues.

Such is the case with the M&S on Oxford Street. At no.s 169-173 the current building is glorious bit of late 1930s modernism.

It was designed by Robert Lutyens in 1937-8 but its name; Pantheon is the last reminder of something far more flamboyant.

The original Pantheon was built 1769-1772 and was designed by James Wyatt.

Only in his early 20s at the time, this building sealed his reputation and he would go on to become one of the more pre-eminent architects of his time.

As with the name itself, the architecture was inspired by its Roman counterpart build in 120AD.

One would enter through a classical portico surmounted with a triangular pediment;

Then gasp in shock as they looked up and entered a cavernous, domed interior.

Essentially an entertainment venue, the opening night was attended by almost 2,000 members of the social elite including Dukes and Duchesses.

Over the next few years the Pantheon enjoyed a glittering reputation as the height of the social scene, hosting assemblies (the Georgian equivalent of a dating and networking event) as well as dances and masked balls.

However, by the later 1700s, the popularity of the Pantheon was in decline and the venue was resorting to more unusual spectacles to draw in the crowds.

One memorable event from 1784 saw the erection of Vicenzo Lunardi’s hot air balloon in the rotunda.

Previously exhibited in the open-air over Moorfields, Lunardi (who took his dog, cat and pigeon with him in the basket) launched his hydrogen balloon over 200,000 spectators who watched him glide into the air before drifting over 20 miles to Hertfordshire.

This exciting scientific display attracted thousands of curious Londoners to the Pantheon who were all swept up “balloonomania” that would capture the imagination of Britain over the next few decades.

Demise of The Pantheon, Oxford Street

The Pantheon was converted into an opera house and was open for one season before a terrible fire burned the whole thing to the ground in 1792.

In the Tate Britain you can see a painting – attributed to a 16-year-old JMW Turner – called The Pantheon, the Morning After the Fire

Although it was rebuilt as an entertainment venue it would never again reach its earlier dizzy heights of success. In the 1830s it underwent a further remodelling as a shopping bazaar and then was used as offices for a wine merchants from the late 1860s.

It was totally demolished in the 1930s and replaced by the current building for M&S. So while this certainly is a striking Grade-II listed building, it’s not quite the incredible venue of bygone years.

So next time you’re walking past M&S on Oxford Street, look up at the green neon lights proclaiming ‘Pantheon’ and cast your mind back to the late 18th century and its curious history…