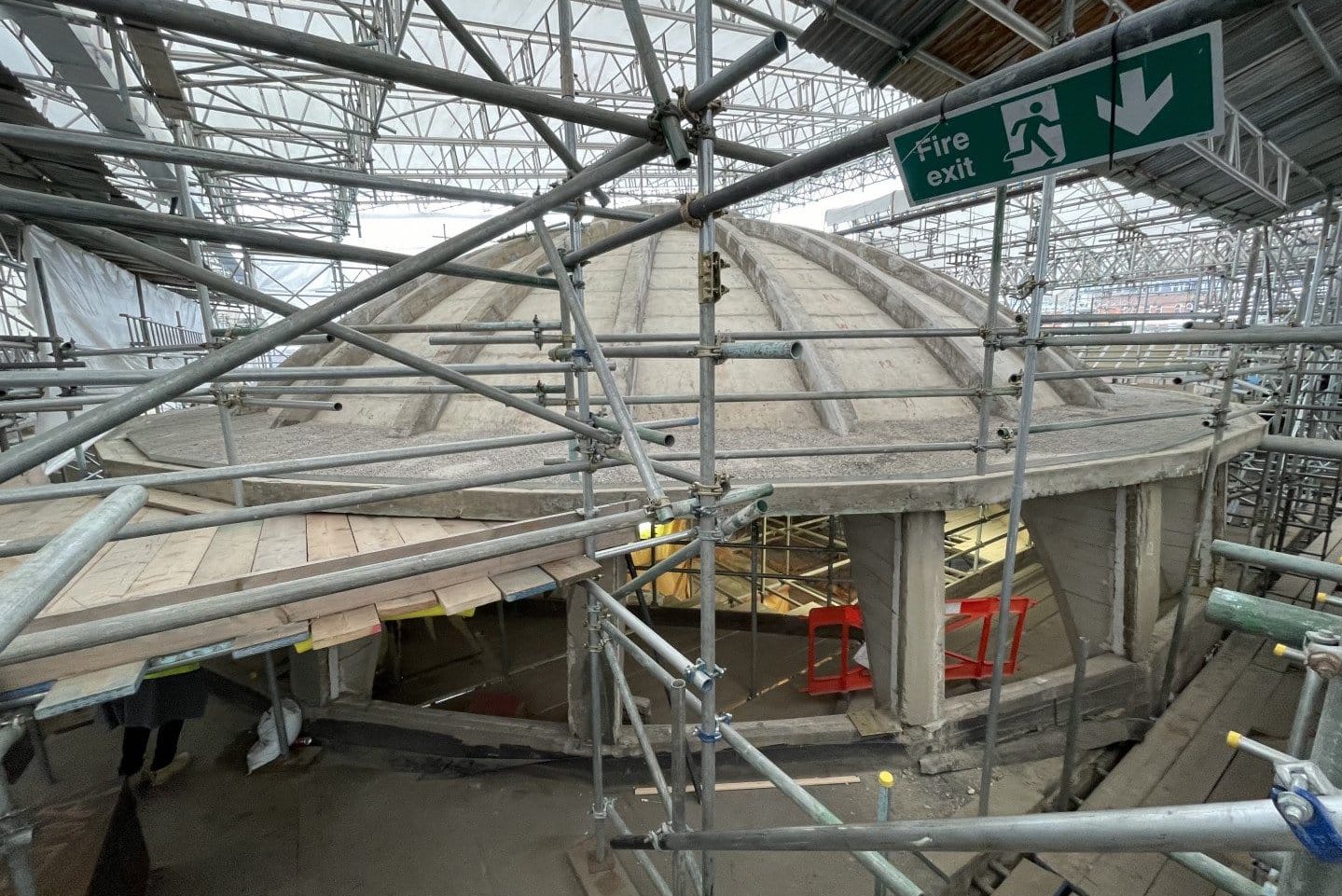 Behind The Scenes at the new Museum of London Smithfield Site

The London Museum – formerly Museum of London – is scheduled to open for a mini festival in 2025 then fully as a museum in 2026. So you can imagine my excitement when I was invited to get a special look around the building site of their new museum site in Smithfield.

There’s been a market based in Smithfield for almost a millennium but the majority of the market buildings date from the mid-late 19th Century.

The Museum of London is being housed in the former General Market buildings, built in the 1870s and originally intended for the sale of fruit and vegetables.

This never really took off (the market reverted to selling meat) but you can spot nice references to fruit and veg in the architectural details.

I particularly like the pineapple standing pride of place at the centre of the pediment over West Poultry Avenue.

Derelict since the late 1990s, these market buildings were in disrepair. The construction team had two main goals, make it watertight and prevent the whole building collapsing.

They’ve managed to save the majority of the structure (around 70%)  but the roof needs to be almost wholly replaced as the lead-lined glass panels had to be stripped out.

On the tour we ascended onto the roof and you can see the new framework in progress, based on the original designs.

It’s clear that the idea is to work with the existing building rather than create something new and it was great to see that striking architectural features like the huge domed roof will be kept.

This isn’t the original Victorian dome, that one was destroyed by a bomb during the Second World War and so the replacement was cast from concrete in the 1950s. However, the nice details of the wood imprints and its sheer scale mean it’s still really impressive.

When complete it will be covered in copper and have an oculus letting light in from above.

The Phoenix columns are also worth a special mention.

A new invention from Phoenix, Arizona in 1862. These were wrought iron instead of cast iron, capable of holding much heavier loads. They also had the benefit of extra fire-resistance, keeping their strength even when heated to extreme temperatures.

You can get more in-depth information about the columns and the heritage details in this document from SAVE, whose campaign saved the market buildings from far less sensitive development threats over recent years.

As mentioned with the dome above, the market suffered several direct hits from bombs during the Second World War.

One of the most notable instances was at Hart Corner, recently restored.

The original Harts Corner was nicknamed the Japanese Village from its elaborate ornamentation, seen in its full glory in the postcard below;

Disaster struck at 11.30am on 8 March 1945. Despite the market technically being closed it was busy after Londoners had flocked there to buy fresh meat, namely rabbits.

The bomb, landing on the corner of Charterhouse Street and Farringdon Road, had one of the worst casualty disasters from a V2 attack and 100 people died with many more injured. You can see an image of the carnage here.

You may prefer the original flamboyant Victorian design over the 1950s Modernist replacement, with clean lines and no decoration. If so, you’ll enjoy the details on this next remarkable discovery…

One of the many surprises that the construction team uncovered during works was the former Lockhart Cocoa Room.

Established in 1875 in Liverpool, they were part of the temperance movement and served hot chocolate, tea and coffee as an alternative to alcohol.

These marvellous tiles had been covered by modern cladding in the 1970s so it’s been a delight to re-discover them and they will become part of the new cafe space when the museum opens!

To get a sense of the scale of the site you need to also appreciate that it stands on top of railway lines.

These were handy when the market was in use, carcasses could be brought in by rail and stored in the cold stores underground.

The temperate drop is still noticeable today and this will be handy for temperature-sensitive objects in the collection, you can recognise the vaulted brick ceiling in the architectural rendering below

Today it’s still used by Thameslink trains running through Farringdon and this will be incorporated into a live display in the museum, with commuters travelling through the museum’s basement space and the visitors seeing a train whizz beneath them!

The current Museum of London is scheduled to close at the end of 2022 and you can keep up to date with the progress of the new London Museum site here.