Venture a little further behind the Eurostar group drop off point (it’s as glamorous as it sounds) and you’ll stumble across the green space surrounding of St Pancras Old Church. 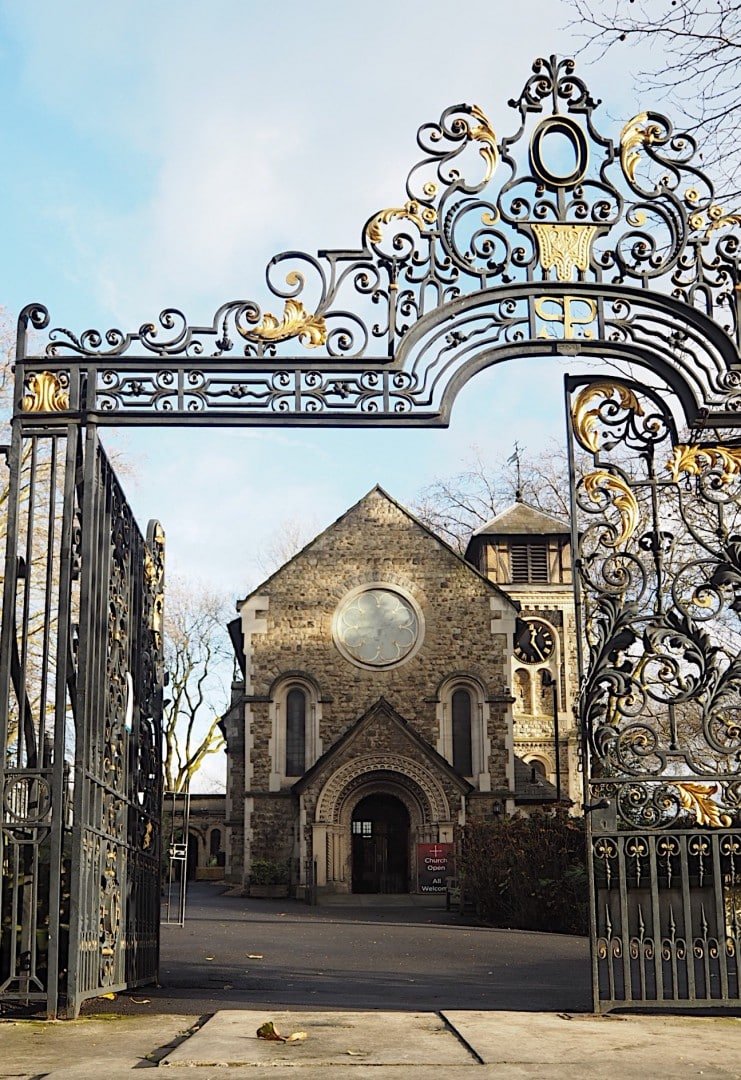 It claims to be one of Europe’s oldest sites of Christian worship possibly dating back to the 4th Century. The present building has technically been here since the 11th/12th Century but it’s only the north wall of the nave where you can see a section of exposed Norman masonry. 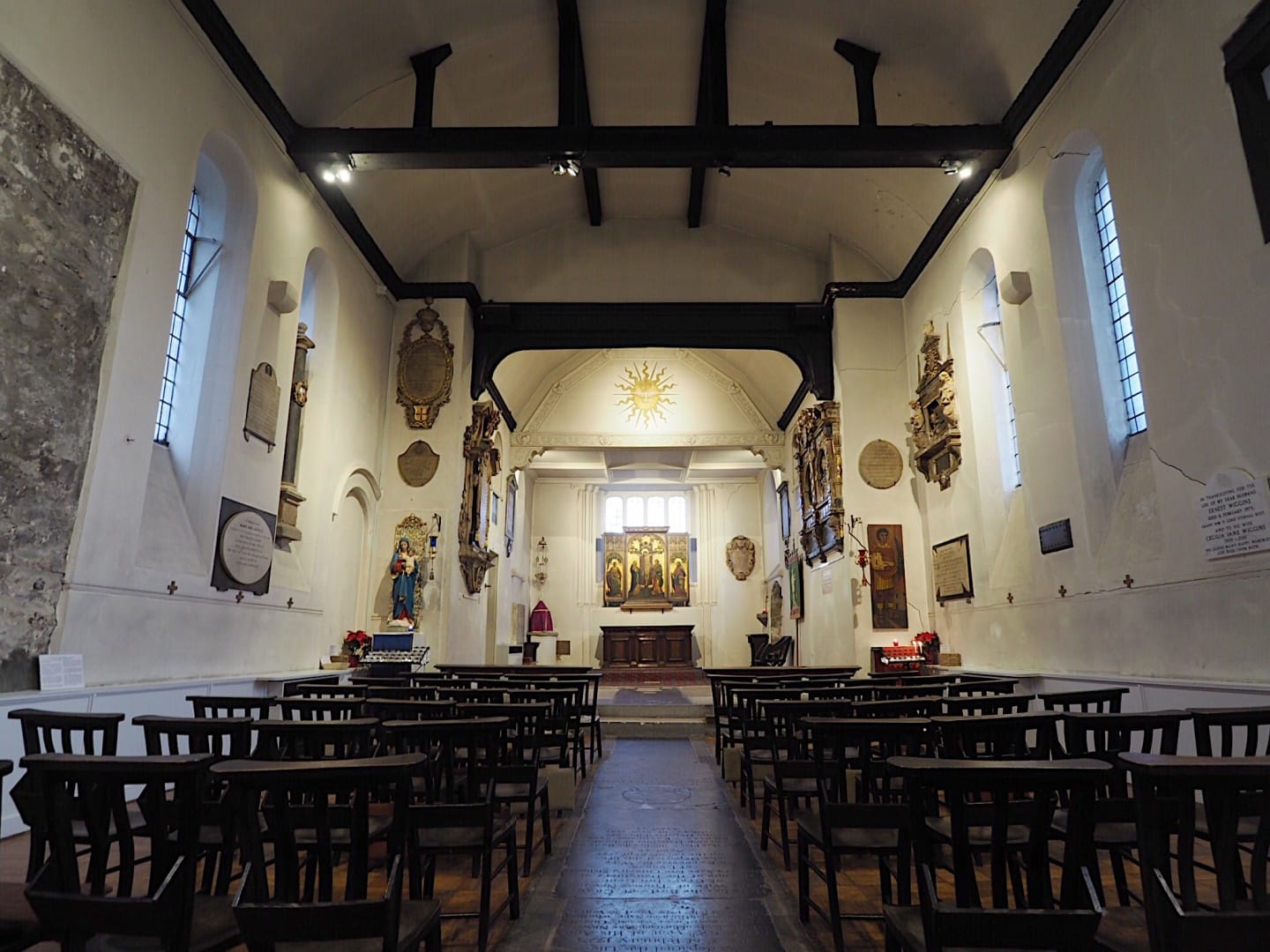 However, according to the church’s website there are also fragments of Roman building material within the building’s fabric too.

As with many churches in London, it’s been added to and restored a few times. The main restoration was 1847, when the old tower was replaced and the whole exterior was spruced up too. There was further work in 1888, then again in 1925 and finally 1948 following bomb damage. 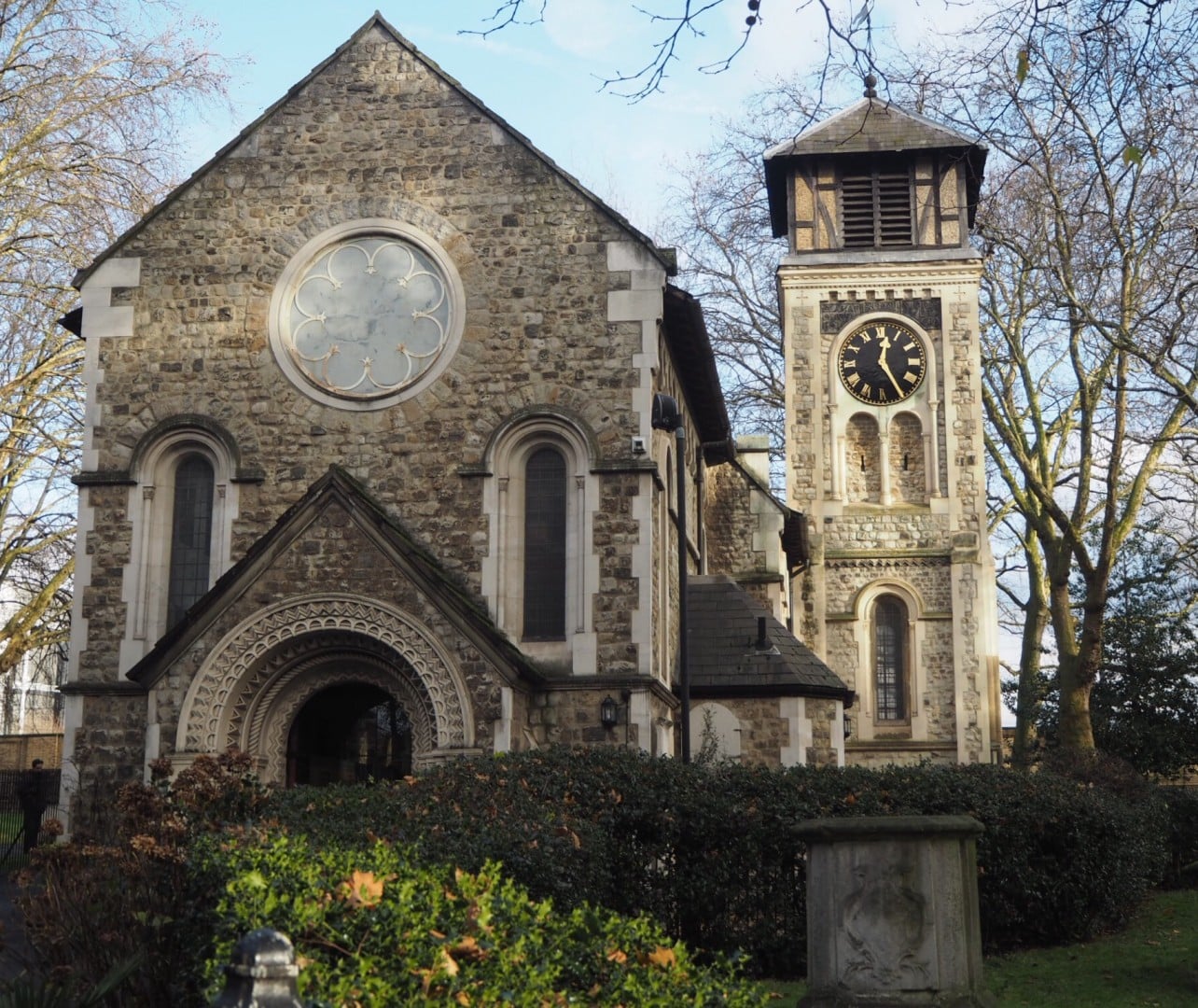 It’s unsurprising that it needed some TLC; during the Civil War (1642-51) the church became a barracks and stable for Cromwell’s troops and ‘treasure’ that was buried for its own protection has now been lost. Happily though, it was found in the 19th century!

Now, when I say treasure, it’s not all gold and silver but they did find a 6th century altar stone which is pretty cool.

Who Was St Pancras?

The story of St Pancras is quite sad; he was a 14 year old boy who had converted to Christianity during Roman times in Turkey. Then, after refusing to denounce his faith he was decapitated in c.300AD and given his youth, today he is the patron saint of children.

Around 300 years later rumours started being made about St Pancras’ tomb, Archbishop Gregory of Tours, France claims anyone making false statements at the tomb would be possessed, collapse or die and the relics become so potent that they were naturally divvied up and spread across the Christian world, including to Britain.

The earliest written reference of the St Pancras cult in Britain is recorded in Bede’s Ecclesiastical History of the English Speaking People, recalling a letter from the Pope to the King of Northumbria c.660s. There’s no direct link with this area at that time but the fact the church is dedicated to St Pancras suggests it’s age. Funnily enough there’s also a copy of Bede’s book in the nearby British Library!

As well as the church you should definitely take in the surrounding tombs. For example this monument to Sir John Soane;

One of England’s greatest architects, Soane is most famous for the Bank of England (parts of which, namely the outer walls still stand today). But does this tomb remind you of anything? 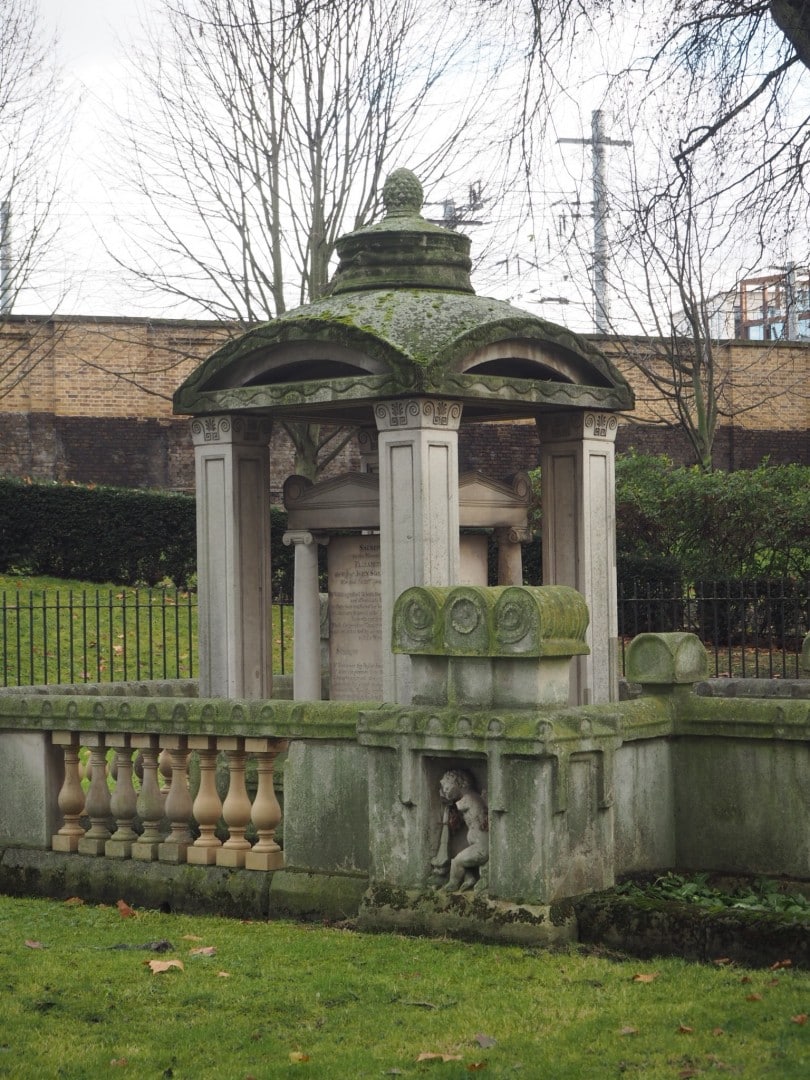 Despite preceding them by 100 years, this is one of the inspirations Sir Giles Gibert Scott took for his Telephone Box design. As a trustee of the Soane Musuem, it’s likely Gilbert Scott would’ve seen sketches of this held in their collection. Also his grandfather George Gilbert Scott built the St Pancras Hotel so he may have even visited the tomb itself!

Another key burial in the church is Mary Wallstonecraft. Though he body was later moved when the railway disrupted the churchyard, a monument can still be found; 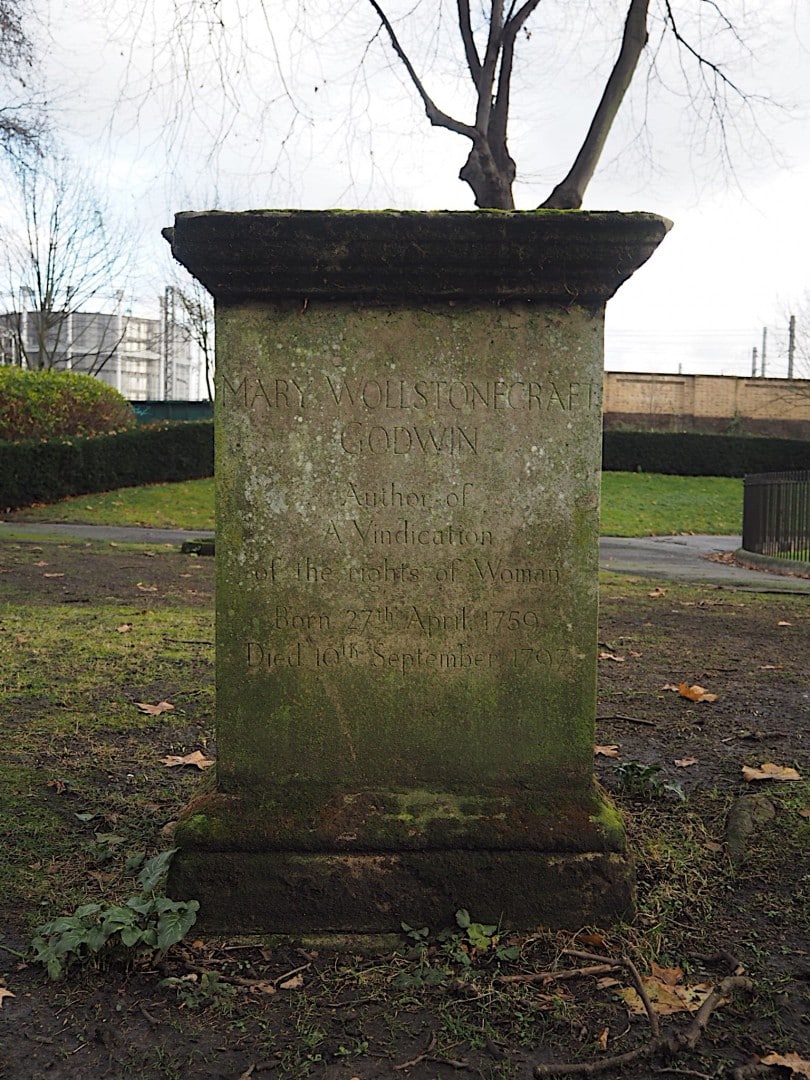 The writer, famous as an advocate for women’s rights, and author of A Vindication of the Rights of Women, was transported to Bournemouth for reburial by her daughter, Mary Shelley. Also an author, Shelley wrote the more widely famous Frankenstein.

As we’re on a spooky theme, let’s venture over to the most unusual monument, The Hardy Tree; 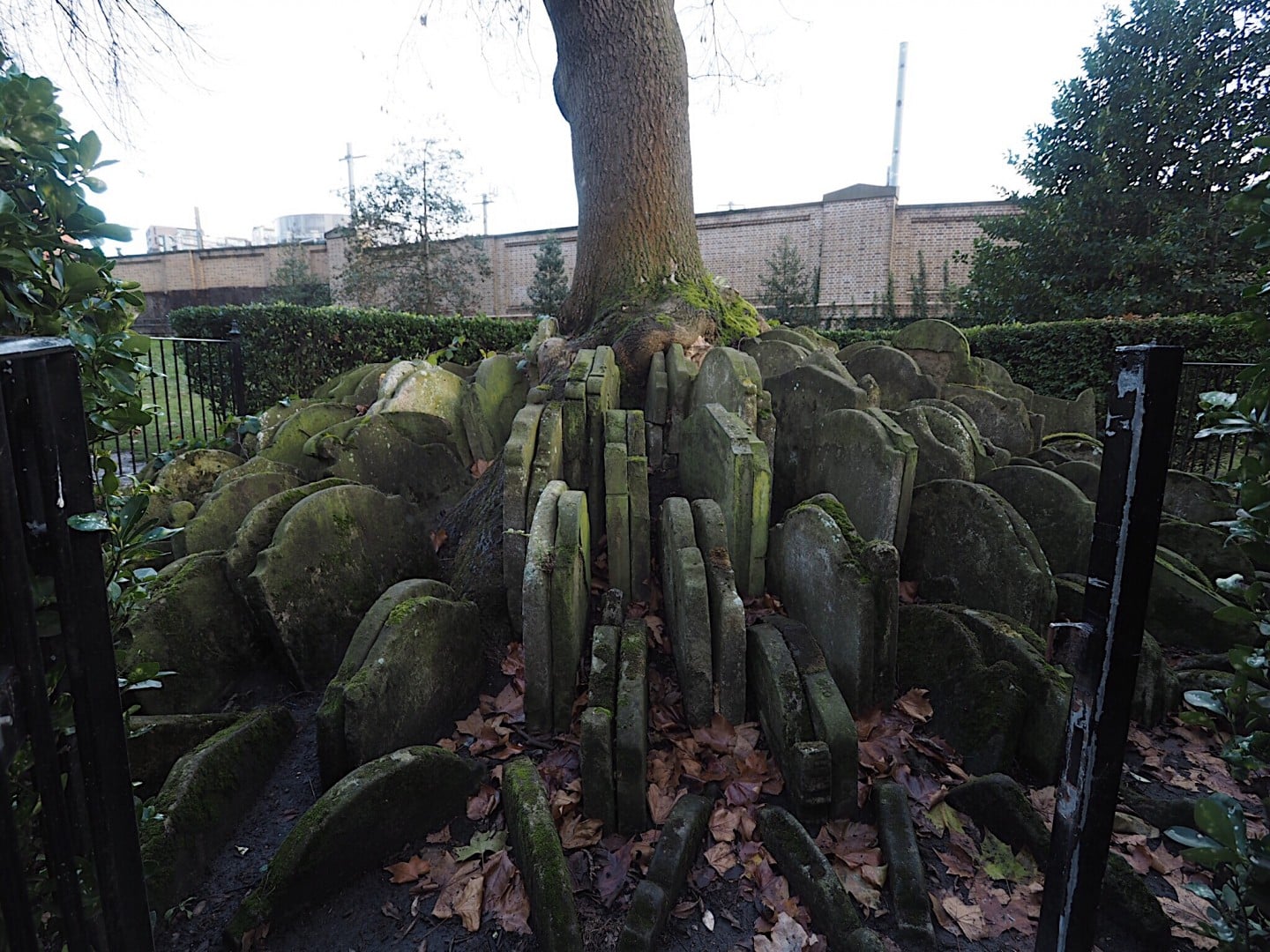 As I mentioned, the railway tracks cutting through the cemetery caused disruption during the 1860s. In fact, it was something of a national scandal with the maltreatment of 10,000 bodies and their tombs hitting the headlines. In light of this, architect Arthur Bloomfield was charged with managing the re-landscaping and in 1865 enlisted a young (and later famous writer) Thomas Hardy for the more gruesome task of exhuming and rearranging the graves.

Now known as The Hardy Tree, it’s unclear why Hardy would arrange the graves in this way (or even whether he even did it himself). 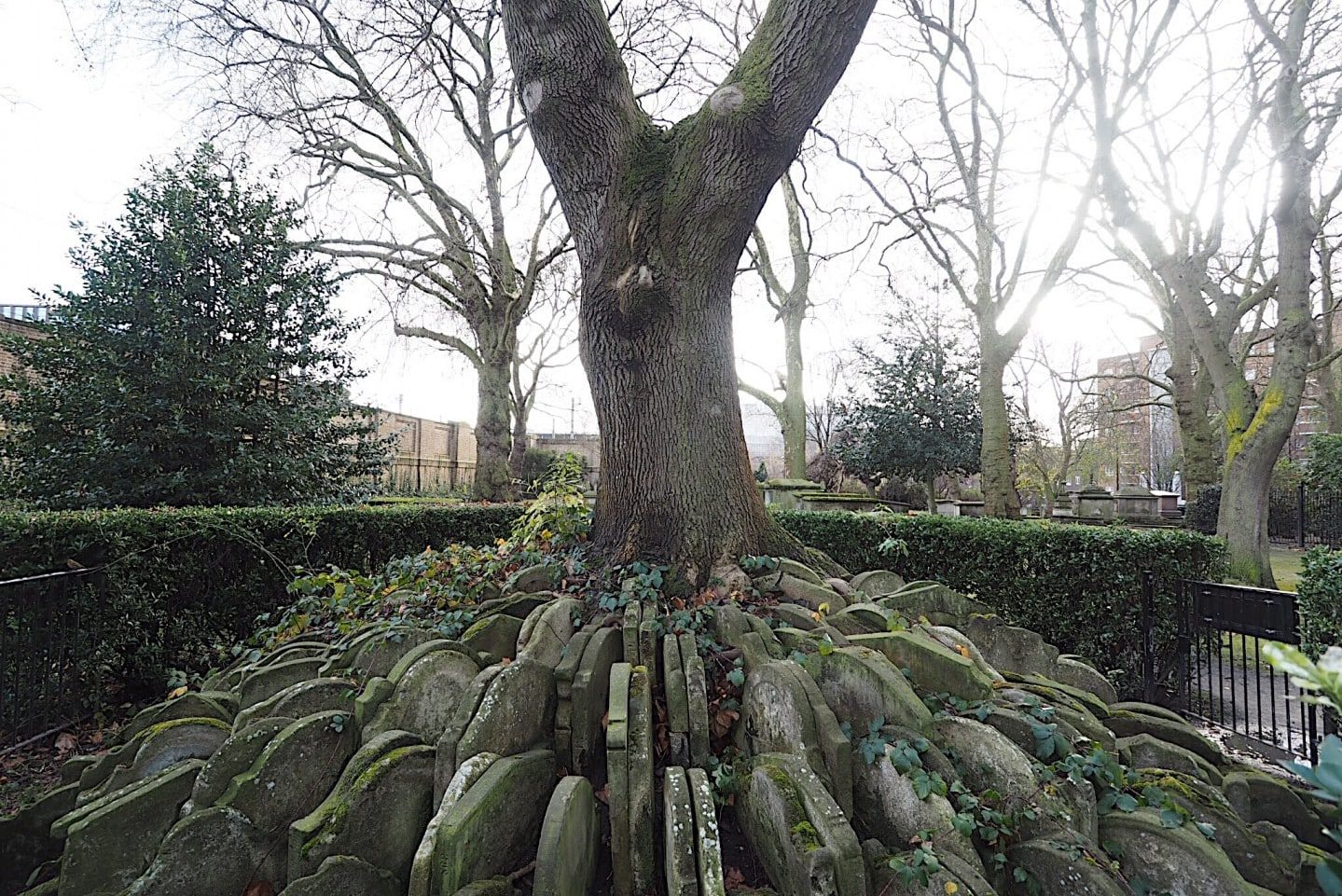 Personally, I think the haunting effect of the stacked stones around the tree is one of London’s best intriguing hidden spots!

The last striking monument is one of the largest in the cemetery. That of Baroness Burdett Coutts;

The ornate 1879 sundial was paid for by Coutts and is a monument to a number of French Immigrants fleeing Revolution, with each of the names and professions written along the side.

One of the most eccentric figures buried in the churchyard is Chevalier D’eon, a French diplomat and spy who took to dressing in women’s clothes for his espionage then became reluctant to relinquish them. D’eon happily boasted that kings flirted with him while he was in disguise and when he came to London in the 18th century the Italian womaniser Casanova took a fancy to him. 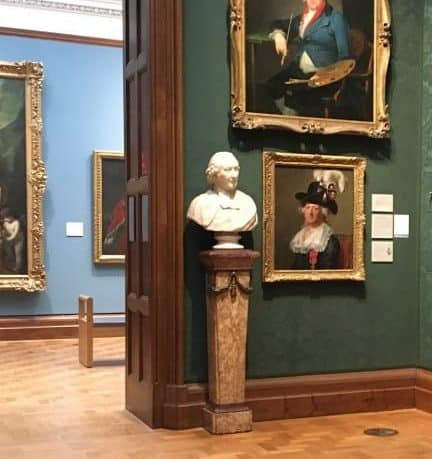 A Portrait of Chevalier D’Eon can be found in the National Gallery today (bottom right painting).

As he got older it seems his ‘act’ wasn’t as convincing as before, with James Boswell, biographer to Dr Samuel Johnson recording that “she appears to me a man in woman’s clothes”. Fierce speculation about D’Eon’s sex meant that even the London Stock Exchange was taking bets on the subject, determined that the final answer would be uncovered after his death. Sadly his grave was obliterated by the railway lines, but to satisfy your curiosity, there was a post-mortem. It confirmed he was indeed born a man with all the relevant organs. However, now that we have a better understanding of gender his extraordinary life gives us more pause for thought.

Have you ever snooped around the churchyard? Is there something else that caught your eye? Let me know! 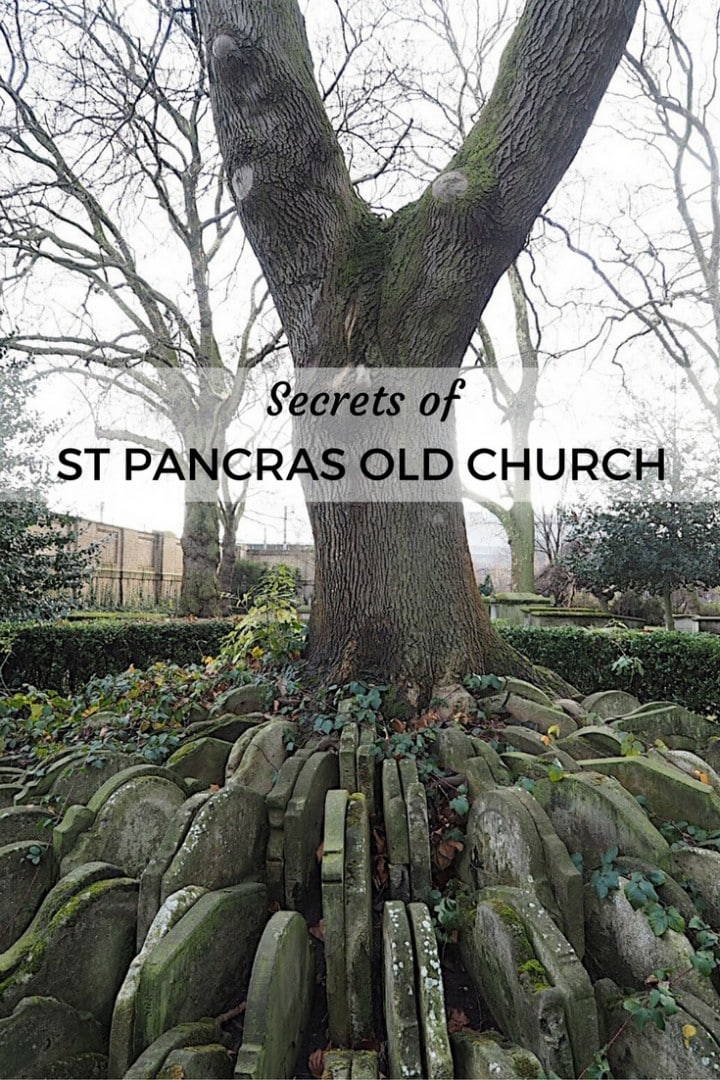